A Hop, a Skip and a Jump to Uruguay 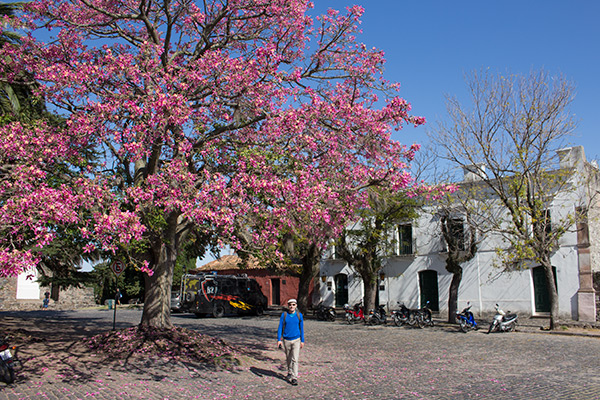 Uruguay is the smallest Spanish-speaking country in South America. Wedged in between its big brothers Argentina and Brazil, it is often seen as the stepchild of the continent and bypassed by many tourists. However, there are many reasons why travelers might want to consider a visit to Uruguay: a traditional estancia stay in the countryside, beach hopping and clubbing in Punta del Este or sand dune hiking in Cabo Polonia to name just a few.

Our reason for visiting was a lot more practical – we were in Buenos Aires and needed to replenish our supply of US dollars. Since dollars are easily obtainable in Uruguay and we had never visited the country, a trip seemed like a no-brainer. After all, getting there from Argentina’s capital is easy enough.

The one-hour Seacat ferry ride took us from Buenos Aires straight across the Rio de la Plata to Colonia del Sacramento, our first of two stops in Uruguay. We stepped off the boat and immediately relaxed. I don’t know what it is about cute colonial towns, but they lower your blood pressure right away. If we could only figure out a way to bottle that… 🙂 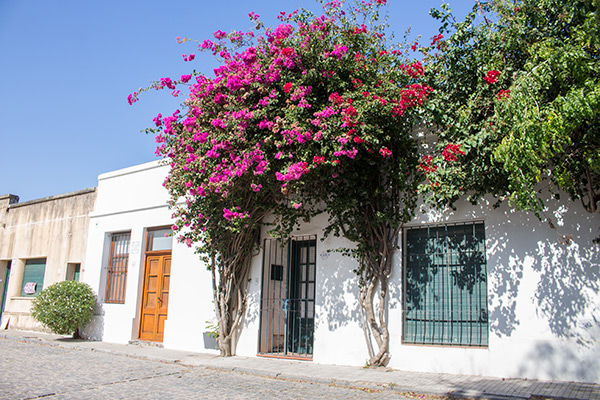 After dropping off our luggage, we headed straight for an ATM to get some dollars. In our post Argentina’s Blue Market, Tony talked about the currency controls in Argentina and how exchanging US dollars into Argentinian pesos makes traveling in Argentina a lot cheaper. From Buenos Aires, Colonia is just a hop, a skip and a jump and makes the perfect getaway to fill your pockets with more US currency. Yes, the small town has taken on the role of a vital money changing destination for Argentinians and foreigners alike, but luckily, it doubles as an enjoyable cultural destination as well. 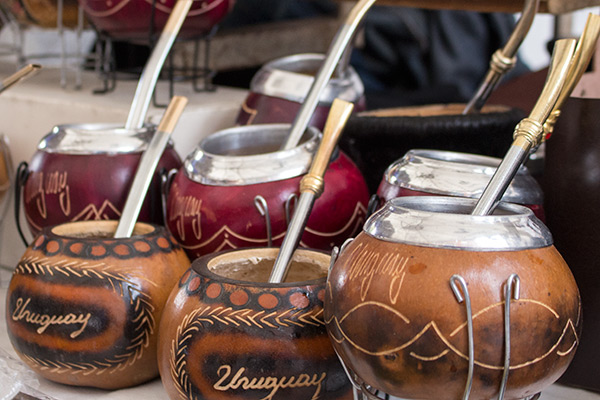 Once we had taken care of business, it was time to explore Barrio Histórico, a UNESCO World Heritage Site on a small peninsula jutting into the Rio de la Plata. We entered the historic quarter through the 18th-century city gate framed by thick fortified walls. What we discovered was an inner oasis of calm.

Old Spanish-Portuguese houses lined the uneven cobbled streets; bourgenvilla added dashes of color to everything. We noticed a few tourists drifting around the old lighthouse and parakeets darting in and out of flowering silk floss trees. We crisscrossed the picturesque plazas, sat on the shady benches, and wound our way round and round taking in more of the colonial vibe. Well, that took all but 30 minutes! 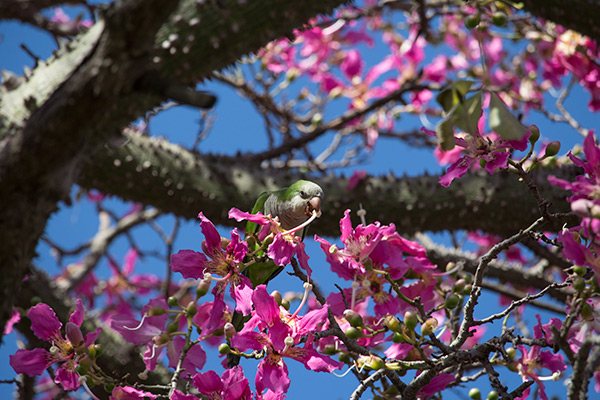 In all truth, the historic center is really small. Visitor can walk everywhere and see everything in a couple of hours, especially if they are pressed for time. Having said that, we actually quite enjoyed spending a couple of days wandering along the waterfront, watching the sun set over the river, and hanging out in the cafes with locals sipping their bitter mate tea. We had just crossed Argentina in an overnight bus again, so Colonia was the perfect place to rest up.

To add another dimension to our 4-day visit to Uruguay, we also wanted to check out the nation’s capital which was only a two-and-a-half hour bus ride away. Again, we went out of curiosity more than anything else. We hadn’t heard anything particularly exciting about Montevideo, but we were close by, so why not explore a bit? 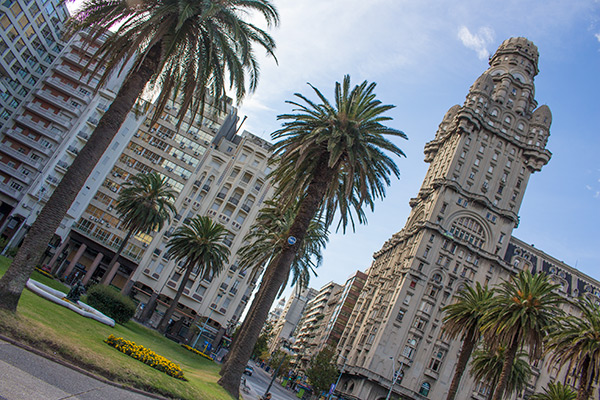 After settling in at the charming Hotel Palacio, an atmospheric hotel from 1928 with a rattling wrought-iron elevator, we set out from Ciudad Vieja to explore the downtown business district of Montevideo. Honestly, it felt a little lackluster and was missing the cosmopolitan flair of other South American capitals. In fact, it reminded me a lot of some average neighborhood in Buenos Aires. The architecture was a mixed bag of pretty colonial, neoclassical, art deco with some crumbling 1970’s skyscrapers that definitely left me asking, “Why?” 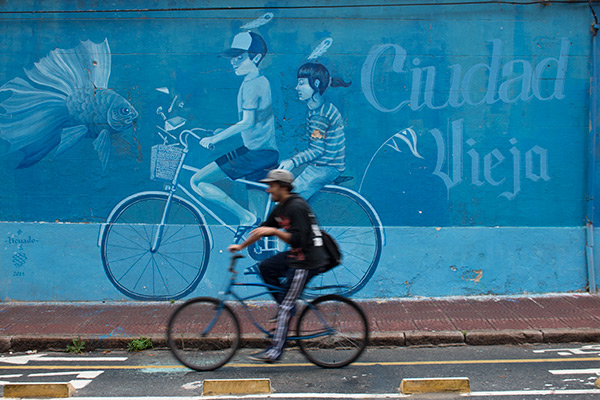 We continued our exploration along La Rambla, the city’s long waterfront walk, checked out some interesting graffiti street art and ended up in the center of Old Town again. As we wandered though the grid of narrow streets in search of a snack, we passed dilapidated turn-of-the-century homes and faded republican-era buildings, many of which now house museums. 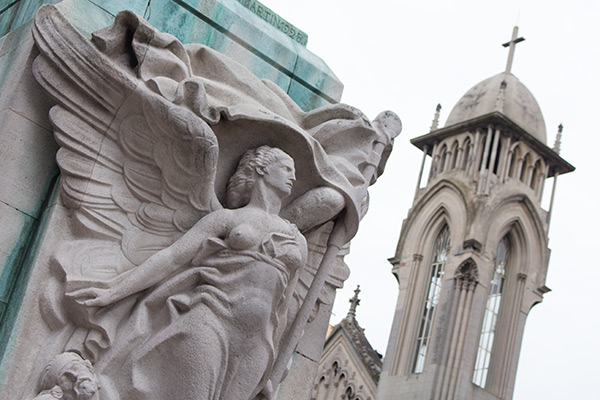 Old Town seemed to have no particular focus and it felt a lot less touristy than anything we had seen in Buenos Aires. For some people, that might have been a huge plus; for us, we often found ourselves asking what we should be doing. Grey skies and drizzle added to the mood. Perhaps, the city might have felt more glamorous in the warm sun. Just when we were about to hop a bus back to Buenos Aires, we discovered the wonderful market building Mercado del Puerto at the end of Avenue Perez Castellano. Who needs the sun in a virtual palace of grilled meats? 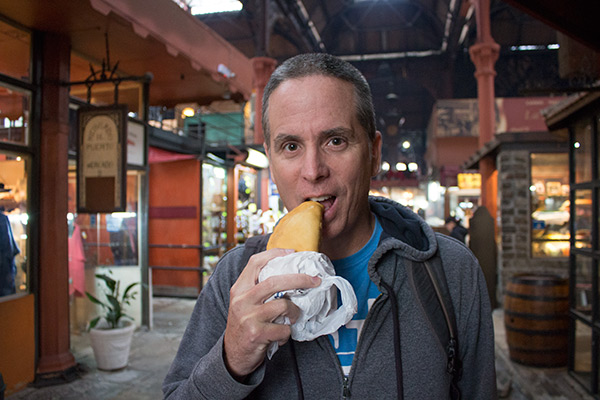 As it turned out, the mercado was the perfect antidote to the blah weather. The historical structure, built in 1868, towered above a collection of inviting eateries like a Steampunk umbrella of rod iron and colored glass. One particularly busy place seemed to be drawing in a hungry crowd of local workers. We joined the long line at Empanadas Carolina and began to study the tempting menu. In the end, we opted for empanadas stuffed with cheese, meat and pancheta – hands down for the best empanadas we had had in South America! 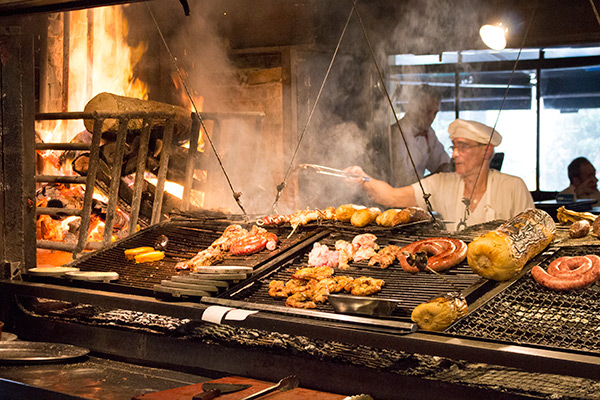 From there, we moved on to the market’s parillas, local BBQ restaurants featuring giant woodfire grills in a sea of tables and chairs. Everywhere you looked, meat! Sizzling steaks, chops, chorizos and morcillas, small plump looking blood sausages. Other establishments offered up grilled fish and crabs. The meat fest was supplemented with roasted peppers, pumpkins, and potatoes. Gorgeous! Although parillas are very popular in Chile and Argentina, we had never gotten around to eating at one. So before leaving Uruguay, we actually indulged in a cholesterol bomb of meat and fries. Thank you Uruguay for the amazing feast. Yum! 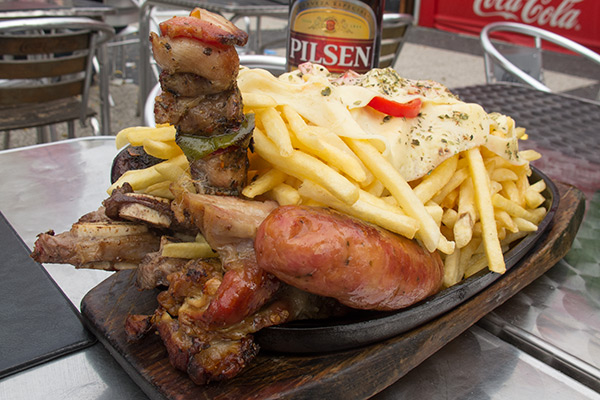 Yes, if you’re a meat eater, you can definitely occupy your time in Montevideo. It was also a huge relief in Uruguay to have access to ATMs and credit cards and not have to worry about backroom Blue Market deals. I suppose in warmer weather, some beach time would really have boosted our impression of the country. Maybe, we’ll have to come back and try it again mid-summer.

Tips for booking a ferry to and from Uruguay

There are three different ferry services between Argentina and Uruguay: Buquebus, Colonia Express and Seacat. All three go to Colonia or Montevideo. Buquebus is the only company which offers a direct ferry service to Montevideo, the other two companies offer a ferry/bus combo, taking passengers to Colonia by ferry and on to Montevideo by bus.

Prices among the three companies vary widely, but they all have one thing in common: Tickets are much cheaper if you buy them far in advance. So before making a move, it’s worth checking out their online availability and pricing. (We booked our ticket from Buenos Aires to Colonia a little late, so our only choice was a first-class ticket. Well, at least we got a glass of champagne…) 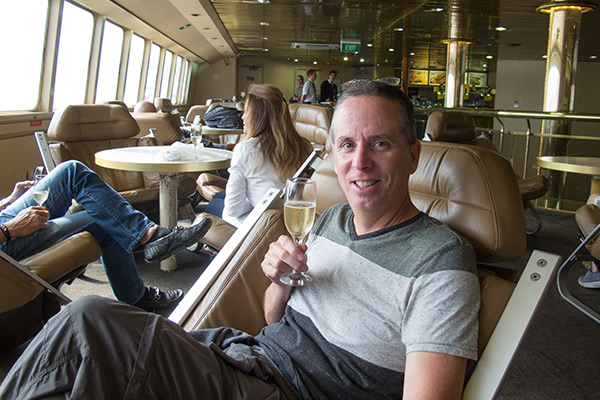 If you are in Buenos Aires, you can buy the ferry tickets directly in their offices. You can also save a lot of money if you pay cash with Argentinian pesos exchanged on the blue market. Do NOT pay with a debit or credit card as they charge the official exchange rate which is much less favorable.

If you are not in Buenos Aires and want to book your tickets online paying with a card, make sure you switch to Uruguayan pesos before you proceed with the payment. This ends up being much cheaper than paying with Argentinian pesos because Uruguayan pesos are not subject to Argentinian currency manipulations. Unfortunately, not all companies will let foreigners pay online or switch to the more favorable Uruguayan currency. Seacat does!

We recommend Seacat for several other reasons as well. While Colonia Express might be a little cheaper, they use smaller boats, and if you are prone to sea sickness, this is not exactly what you want. Buquebus has the most frequent ferries, but is also the most expensive company. The interesting thing is, Seacat is actually run by Buquebus. This means you will be traveling on a Buquebus ferry while having paid much less than everyone who bought their ticket through Buquebus.

2 responses to “A Hop, a Skip and a Jump to Uruguay”