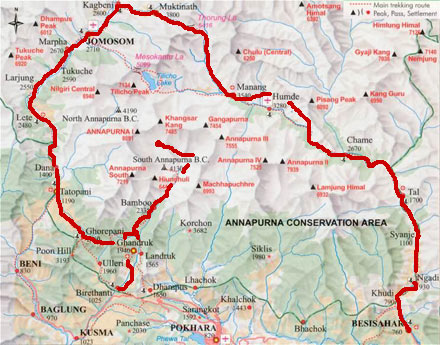 The first and most important item on our what-to-do-in-Nepal list was hiking the Annapurna Circuit, one of the most popular trekking routes in the world. Luckily, we’ll be trekking somewhat out of season, so we hope that we won’t be plodding along the trails with a million other tourists.

The Annapurna region offers an amazing diversity of terrain and culture: lush green foothills, deep forested gorges, barren landscapes much like we saw in Tibet, the high Thorong La pass, and a variety of traditional villages. But this is not all. The lodge-based trek, so called because along the way we’ll be overnighting in small guest houses rather than camping, goes by three of the ten highest mountains on earth: Dhaulagiri I, Manaslu and Annapurna I all over 8000 m (26,240 feet) tall as well as a host of other spectacular mountains.