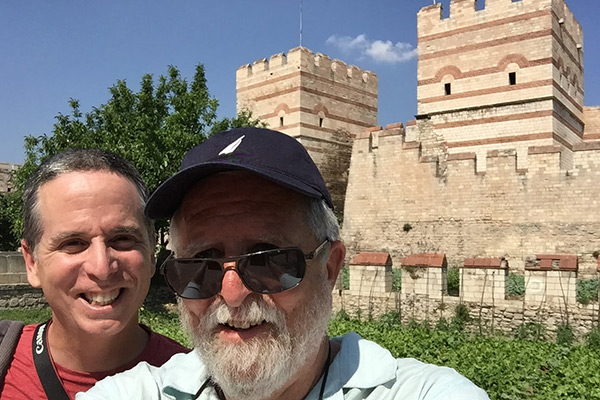 Sometimes, you just have to grab your dad and go have an adventure, right? This trip was something special, something very different. In my years of travel blogging, this stands WAY out as one of my favorite travel moments. Because of the way it began, and the epic dad & son experience it became.

So how did we end up in Istanbul?

In 2013, Thomas and I joined a group of friends from Berlin in our favorite city on the planet, Istanbul. I had been to Istanbul twice before and had seen most of the tourist attractions there, but there was one thing I had never done, one thing I insisted we do: I wanted to walk the entire length of the Theodesian Walls, the legendary walls of Constantinople. 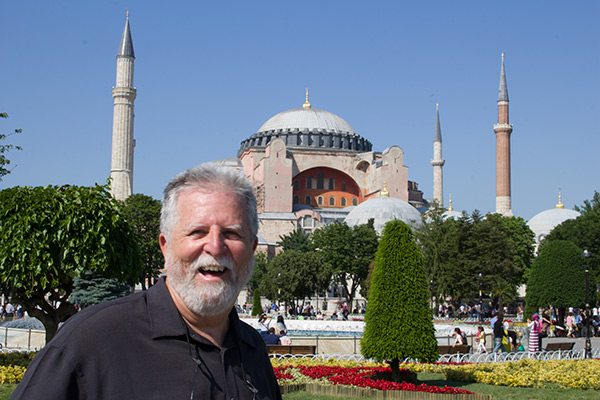 On my previous visit, I had set out to complete this task with friends, but it turns out that not everyone has the same level of dedication to walking city walls as I do. (I admit it, anyone who follows our blog knows that I am a bit psycho about city walls. It’s even in my bio here.) Halfway through that walk, attention spans ran out and my goal of finally walking the entire length of the 6-kilometer walls was not achieved. The whole thing ended in a bit of a fight with Thomas, and I vented a little on the blog, subtly acknowledging:

On our next trip, I intend to walk the entire wall. (Since we were with friends this time, there was a limit to how far you can push the wall fetish.)

My dad read that post and he could clearly see that I was disappointed. He left a comment on the blog saying:

Ok Tony, this post has peaked my curiosity. I’m ready to meet you at the Palace of the Porphyrogenitus for that 6 kilometer hike to satisfy your wall fetish, however you have to buy the baklava with kaymak before we head out!

He was referring to a picture in the post of the SPECTACULAR baklava at Karaköy Güllüoğlu. Uh, you don’t have to ask me twice!!! 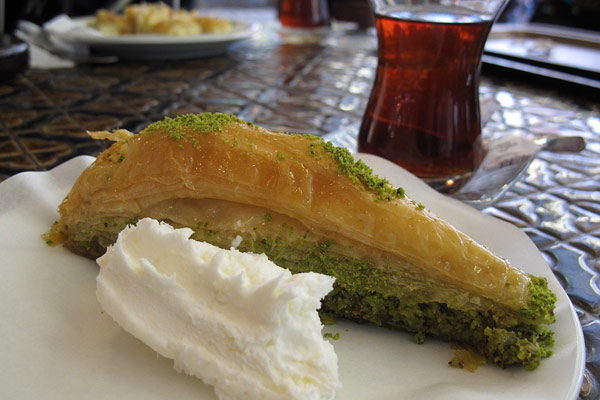 Two years later, we met in Istanbul to fulfill that promise. We had baklava at Karaköy Güllüoğlu (did I actually pay?) and headed out to walk the length of the walls from beginning to end. We took the ferry to the Ayvansaray, wound our way up the backstreets past the Palace of the Porphyrogenitus, took a quick side trip to the Byzantine Chora Church, and then we walked  along the outer walls past a series of gates, towers, and bridges that have survived the onslaughts of some serious history. Our final destination brought us to Yedikule Fortress and the Marble Tower. Success, my goal was achieved! One sign of current events that I should point out  was the large number of Syrian refugees camping in the shadow of the walls. 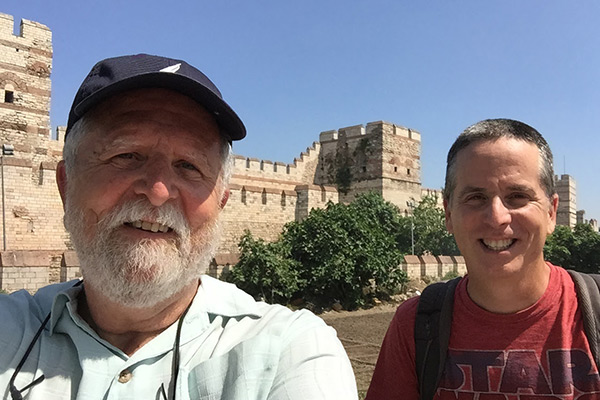 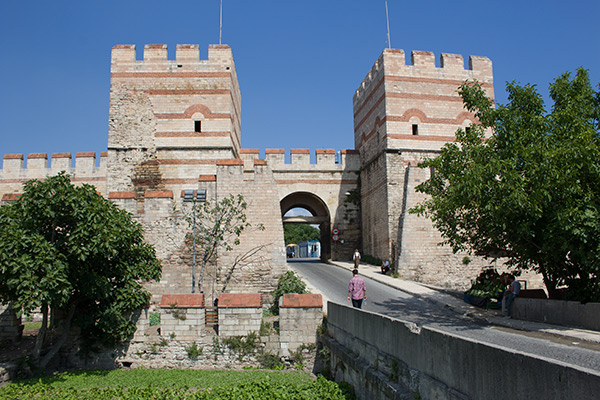 “We walked along the outer walls past a series of gates, towers, and bridges that have survived the onslaughts of some serious history.” 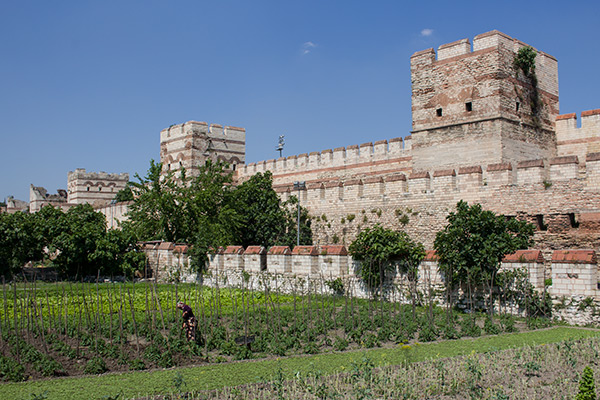 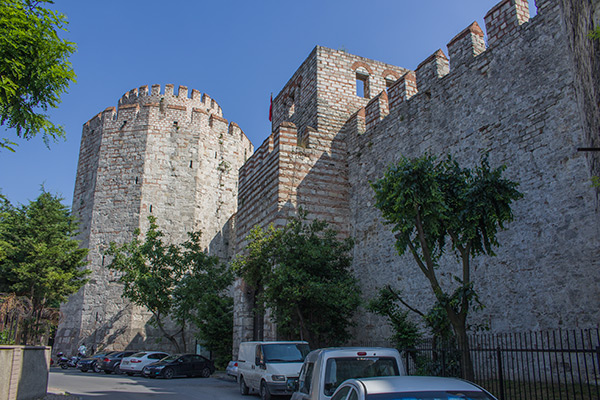 But our Istanbul adventure took us well beyond the walls. We explored my favorite building in the world, Hagia Sophia, and ventured into the city’s greatest treasures including the Blue Mosque and the Süleymaniye Mosque. We cooled off in the shadows of the Basilica Cistern, explored the ornate halls and gardens of Topkapı Palace and gazed at the Byzantine mosaics of Büyük Saray. 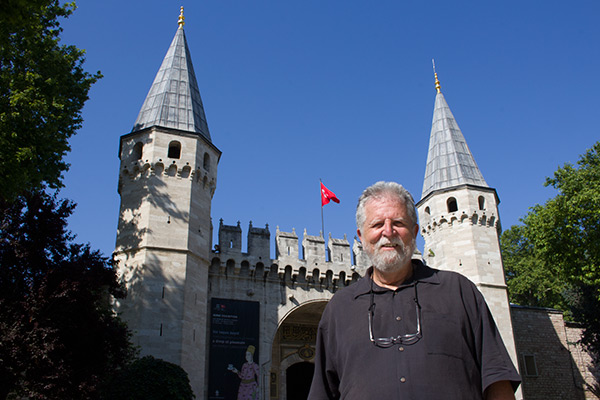 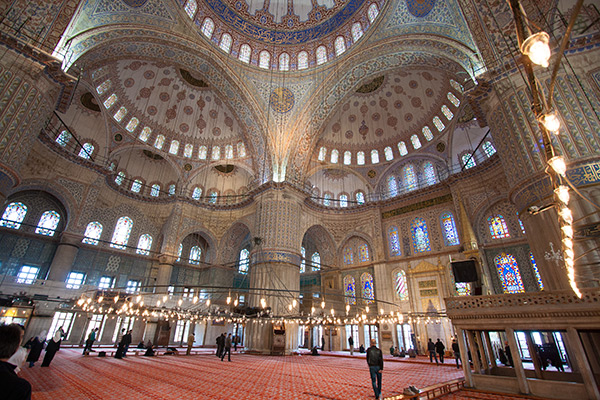 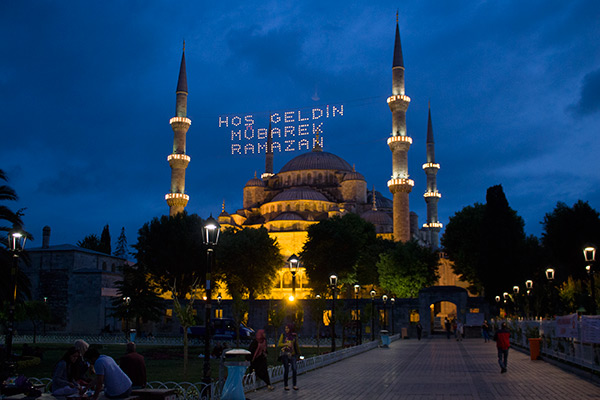 Istanbul is one colorful attraction after another. We dove into the Grand Bazaar, the most famous of Istanbul’s markets, and fished through the sea of treasures searching for discoveries. Carpets, lamps, sweets and spices. Gold, diamonds, and Turkish delight. Hidden deep within the bazaar, we found one booth full of curious items: brass sextants, telescopes, anchors, military pins, brooches, cameos, even Soviet and Nazi badges. Strange glittery items that had piled up into one very historical find. Dad and I lingered in a bazaar tea house and people-watched as local salesmen and tourists crisscrossed the labyrinth of stores. It’s a tourist staple, but the Grand Bazaar will always be one of my favorite places in the city. 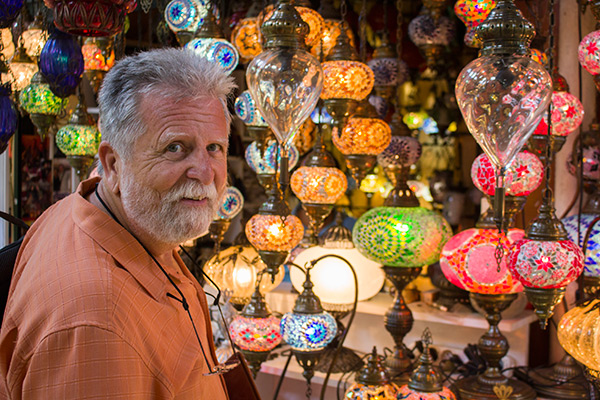 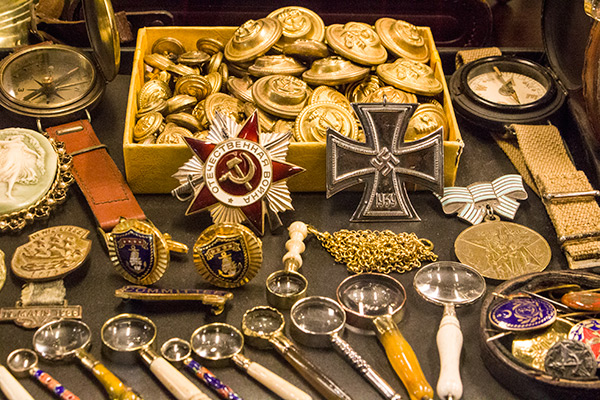 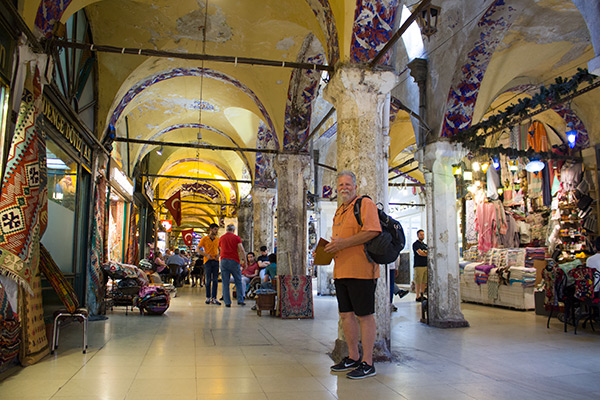 Eager to see beyond the city limits, we hopped a ferry up the Bosphorus and floated past the massive fortified walls of Rumelihisarı to the tiny enclave of Anadolu Kavağı. We stuffed ourselves with fish in the village, climbed up to the fortress overlooking the Black Sea and gawked at the EXTRAORDINARY half-constructed bridge hanging over the mouth of the strait. On the way back to Istanbul, we floated along sipping the classic ferry tea. 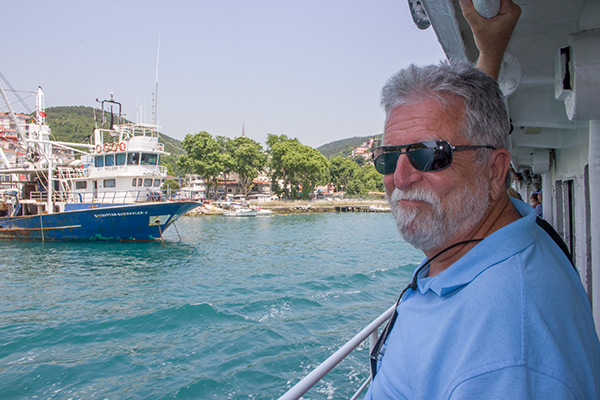 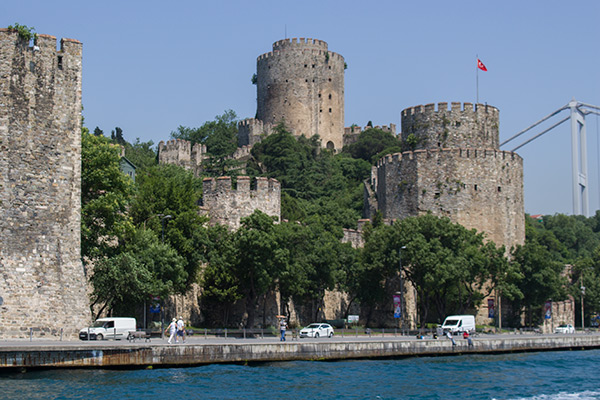 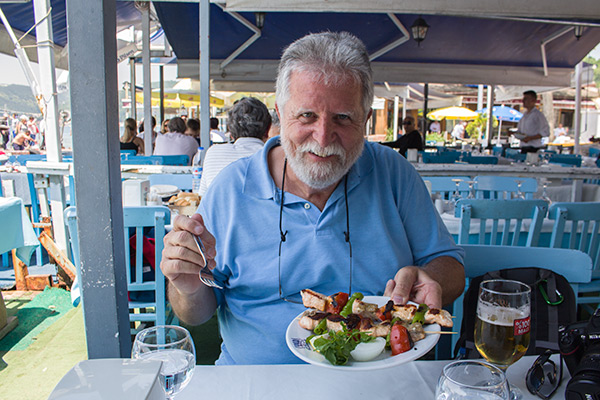 Food and drink were a big theme on this trip. My father couldn’t get enough of Turkey’s fresh-squeezed orange juice. We squished into the crowded, water-side tables at the fish boats in Eminönü and indulged in their famous fish sandwiches doused in lemon juice. We sampled pide at Şimşek Pide Salonu and crossed the Bosphorus to try stuffed artichokes and savory eggplant at Çiya Sofrası. Despite my skepticism, my dad urged us into The Han in Sultanahmet and he was rewarded with a truly delicious fish dish – his favorite in Istanbul. (He gets the credit here because I was quite skeptical about the restaurant until I tasted his fish, and then I really wished I had ordered the same thing.) 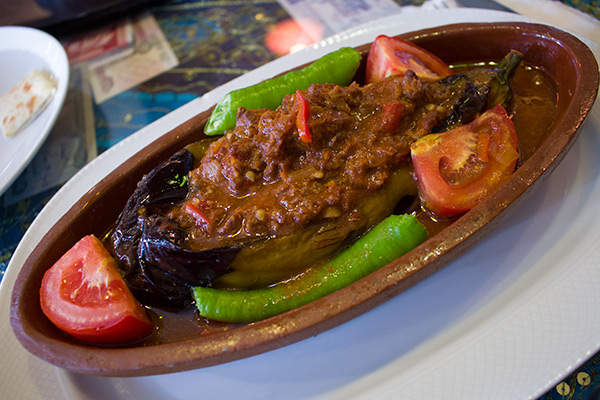 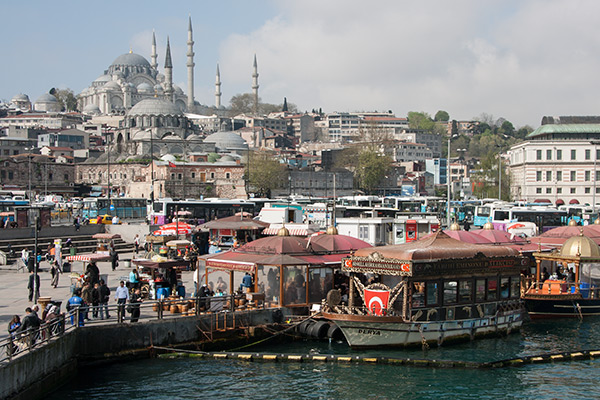 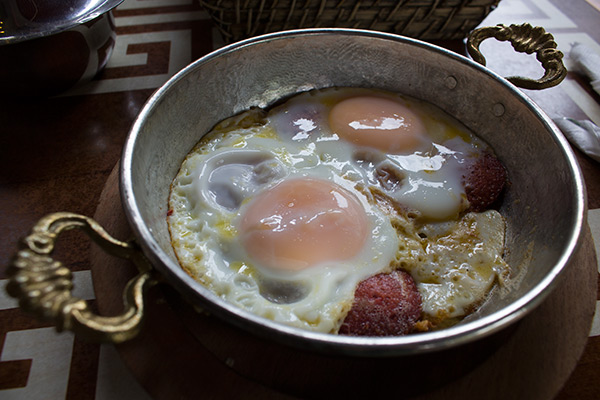 My dad seemed to love everything he tasted, but hilariously, he seemed to love breakfast more than anything. My dominant memory from this trip will always be breakfasts at our corner cafe in Cihangir or at Karaköy Güllüoğlu. (Sorry Özgür and Leonie, sometimes I just can’t wait for my baklava with kaymak.) I don’t think anyone has ever expressed so much enthusiasm for breakfast as my dad at the corner cafe. These meals will last in my memory forever. 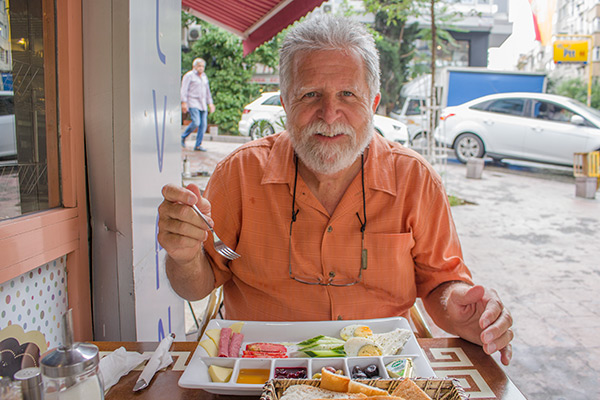 And that was really the point of this trip, sharing my favorite city with my dad and experiencing it through his eyes. I have visited Istanbul several times now, but this adventure with my dad was like rediscovering the city for the first time. It was about exploration and eating, laughing and enjoyment. It was ten days of talking and discovery. I can’t express how much I loved this trip – it truly was Tony and Larry’s awesome adventure.

I suggest that everyone out there in Internet land get up right now, call their dad, and start planning your next adventure together. 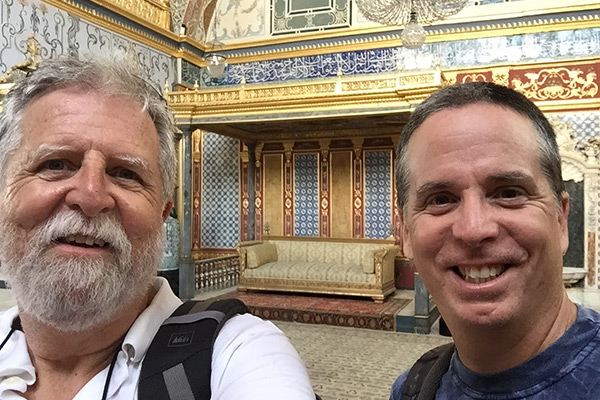 Go have an adventure!