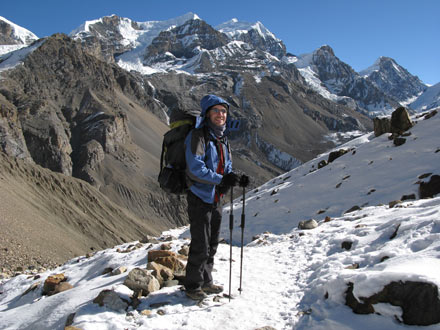 Hiking the Annapurna Circuit, there seems to be a disproportional focus on crossing Thorung La Pass. Everything is either before the pass or after the pass. At an altitude of 5416 m (17,768 feet), Thorung La Pass is a couple of hundred meters lower than Drolma La Pass at Mt. Kailash, and yet, acute mountain sickness (AMS) is much more of a topic here than it ever was in Tibet. There is even a daily lecture on how to prevent AMS in Manang, a small village where we spent a couple of days acclimatizing. Because of all the endless stories of people getting sick and having to turn back, we couldn’t help but feel apprehensive ourselves. All the tension intensified when a French tourist crossing the pass died (I know a similar thing happened at Mt. Kailash, but no, we’re not making this up). 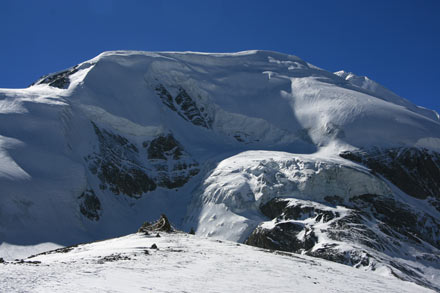 Between Manang and Thorung La Pass, we spent a couple of nights in Yak Kharka (4020 m / 13,185 feet) and Thorung Phedi (4560 m / 15,040 feet) walking only 8-9 kilometers (6 miles) a day but steadily gaining in altitude. While the Manang valley was green and forested, the higher regions of the circuit were soon dominated by multi-colored earth tones and rocky terrain. When we finally got to Thorung Phedi, from where the steep climb to Thorung La Pass begins, we were in the cold, barren Himalayan wilderness. 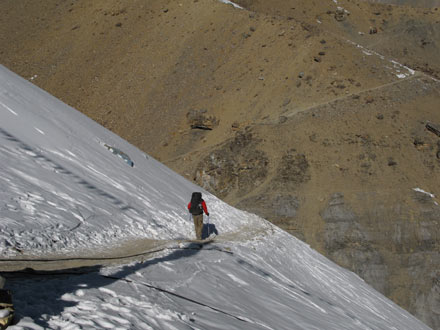 We started our hike just after 6 AM the next morning, two hours later than most people who had left in the darkness with only a headlamp. Although a long day lay ahead of us, we decided it was safer to leave after sunrise. Even with the sun coming up, it was freezing cold and by the time we got to Thorung High Camp one hour later, the water in our bottles had turned into a slushie. 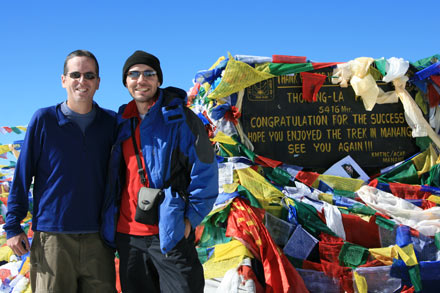 The beautiful views of Annapurna 3, Gangapurna and Chulu West lured us to sit in the warm teahouse and enjoy the sight but we pushed on over an intimidating-looking ice-covered narrow path. The temperature seemed to change constantly now depending on whether we were walking in a sunny or in a shaded area. Jackets off, jackets on – we were hot one moment and cold another. Tony and I continued winding our way slowly up toward the pass over snow-covered trails. While we were showing the first signs of fatigue, the sight of the beautiful Thorung Peak inspired us to keep going. 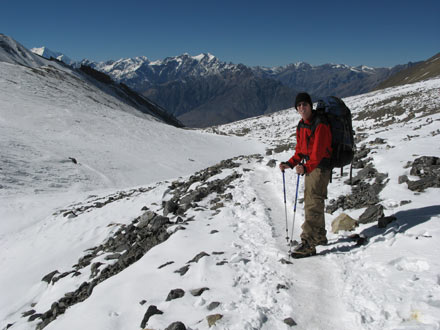 We arrived at Thorung La Pass, a broad saddle between the Yakwakang and Khatung Kang mountains and marked by prayer flags and a stupa, just after noon. We had climbed 800 m (2,600 feet) in 5.2 km (3.2 miles) since we left the lodge but 9 more kilometers (5.6 miles) and a descent of 1700 m (5,500 feet) lay beyond the pass. This is the reason why the Annapurna Circuit is usually done in a counter-clockwise fashion starting in Besisahar and finishing in Birethanti. Who would want to climb 1700 m in one go at those altitudes? We spent 30 minutes on the pass before moving on to avoid the full blow of a lurking headache. 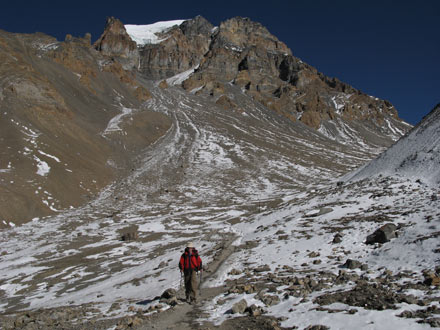 As we started down the steep trails, the landscape transformed once again and the Dhaulagiri mountain range and ash-brown hills of Mustang came into view. Because we were running late and did not want to overnight on the frigid mountain, we sprinted down the zigzags whenever we didn’t have to skid over icy ledges or walk through deep snow. Our knees were in desperate need of rest when the trails suddenly leveled out and led us through a valley right into Muktinath just as it was getting dark. We were completely drained but happy to have successfully completed this pivotal and most difficult leg of the Annapurna Circuit. 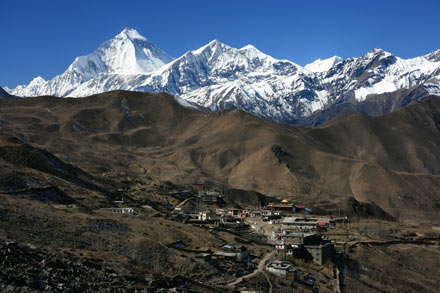