The Best Beaches in the World 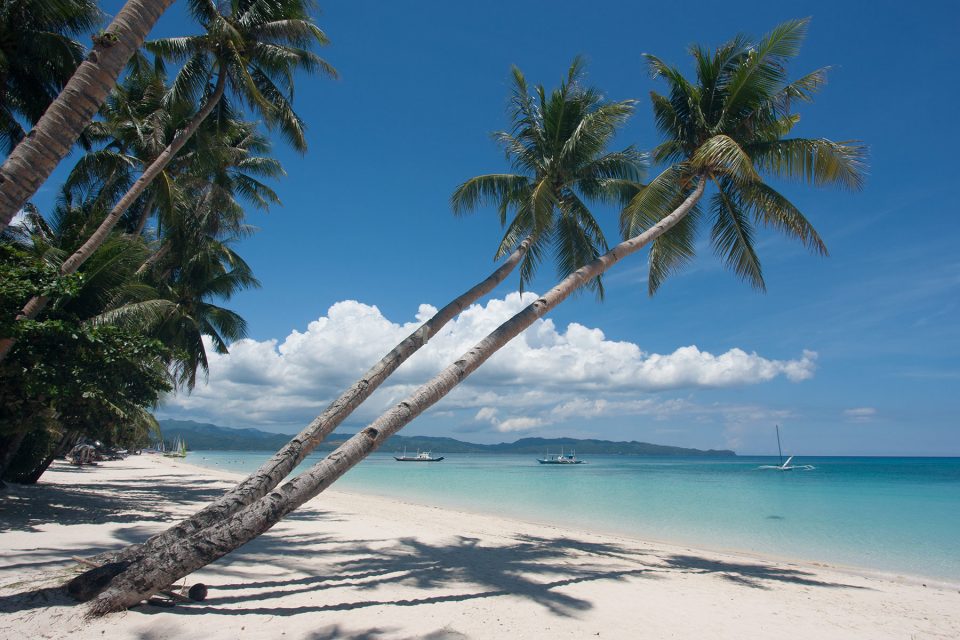 Dreaming of sun and sand? Stuck in a cubicle with cold winds lashing against the frosty windows? Or do you just need a few tips to help you plan your next beach trip? We are putting together our ultimate “best beaches in the world” list. Unlike other lists out there, this is no mass-produced product thrown together with stock photos. We have personally been to (and totally loved) each of these extraordinary beach destinations and snapped the photos ourselves. Enjoy! 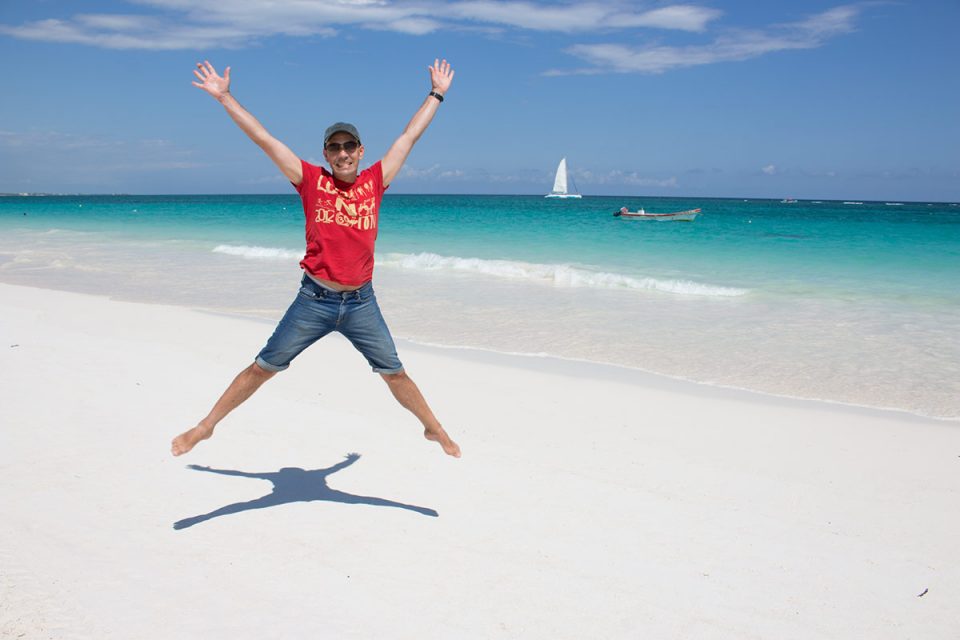 Location: Outside the town of Tulum in the Mexican state of Quintana Roo.

What’s Cool: The sand in Tulum almost seems to glow magically making it just a bit more beautiful than other white-sand beaches. As we were relaxing in the heat with a cold beer after an amazing day exploring the Mayan ruins situated at the northern end of the beach, a flock of flamingos flew directly overhead. Amazing! This is also a fantastic place to learn to kiteboard. With pyramids, perfect sand, gorgeous water, iguanas and the occasional flock of flamingos, Tulum earns our top spot on the list of best beaches in the world. 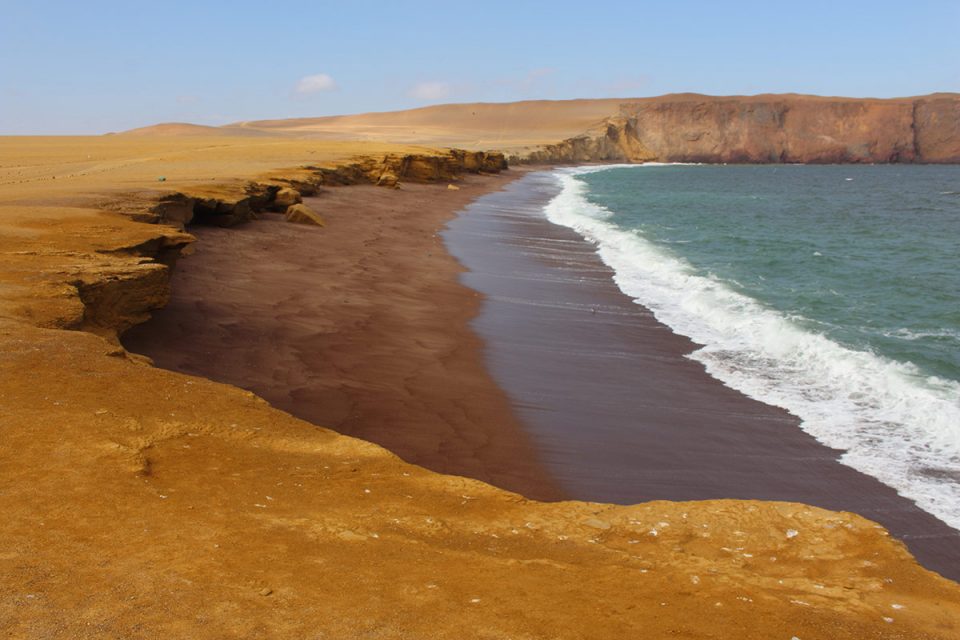 Location: In the reserve on the Paracas Peninsula in Peru.

What’s Cool: A surreal red beach backed by the mustard-yellow sands of the Paracas coastal desert. This is no tropical paradise, but we loved the psychedelic views as well as the seals and penguins along the coast and the offshore islands. And don’t miss the huge candelabra glyph carved into a nearby coastal dune. 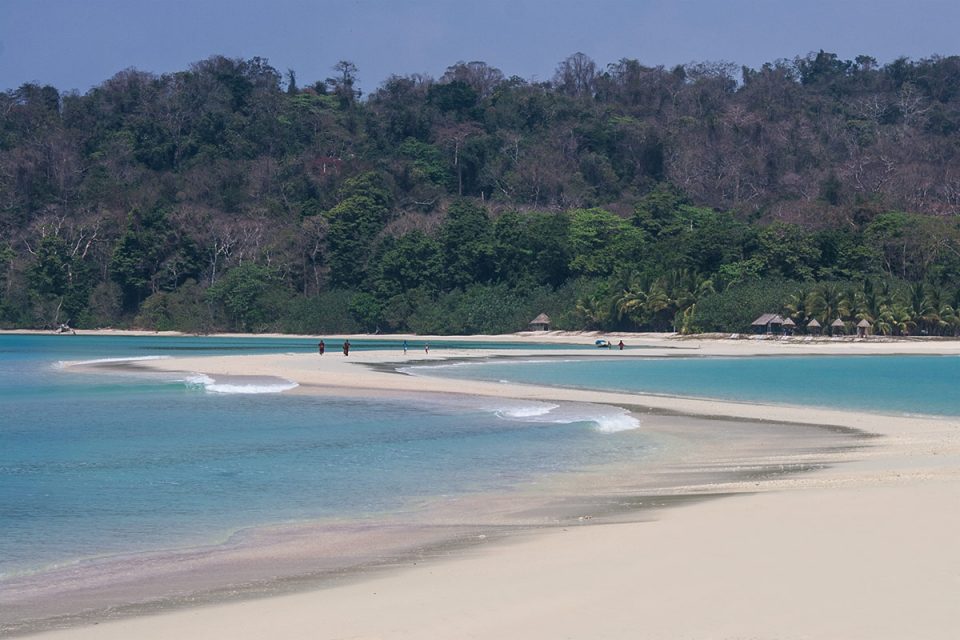 Location: The sandbar connects tiny Smith and Ross Islands just off the coast of Northern Andaman Island in the Andaman Island Archipelago. The island chain is part of India, but it sits in the middle of the Indian Ocean halfway between mainland India and Thailand.

What’s Cool: This super-remote island paradise is beyond gorgeous. The island’s unique, winding sandbar and its status as a nature reserve put it a step above all the other perfect white-sand Andaman beaches. After we climbed out of the bathtub waters, we lay on the beach in the shadow of the dense Andaman jungle and photographed the bright red crabs. Beautiful. 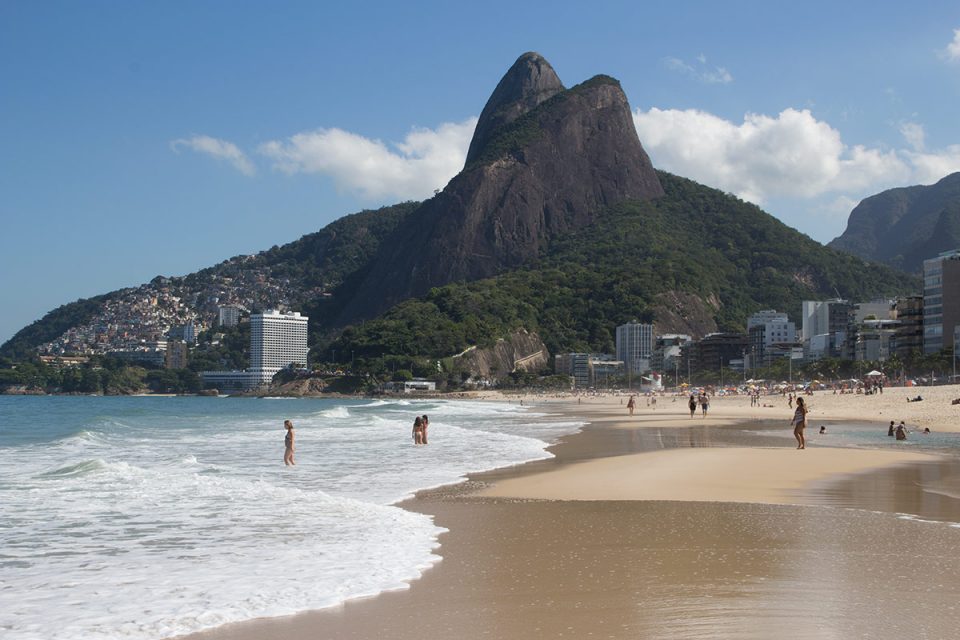 What’s Cool: This is our choice for the world’s most phenomenal city beach (and we’ve seen A LOT of the competition.) It and neighboring Copacabana are unquestionably the epicenter of Brazilian beach culture and they totally live up to the hype. Grab a caipirinha, stretch out under an umbrella, and listen to the “Girl from Ipanema,” which is certainly playing on someone’s radio. 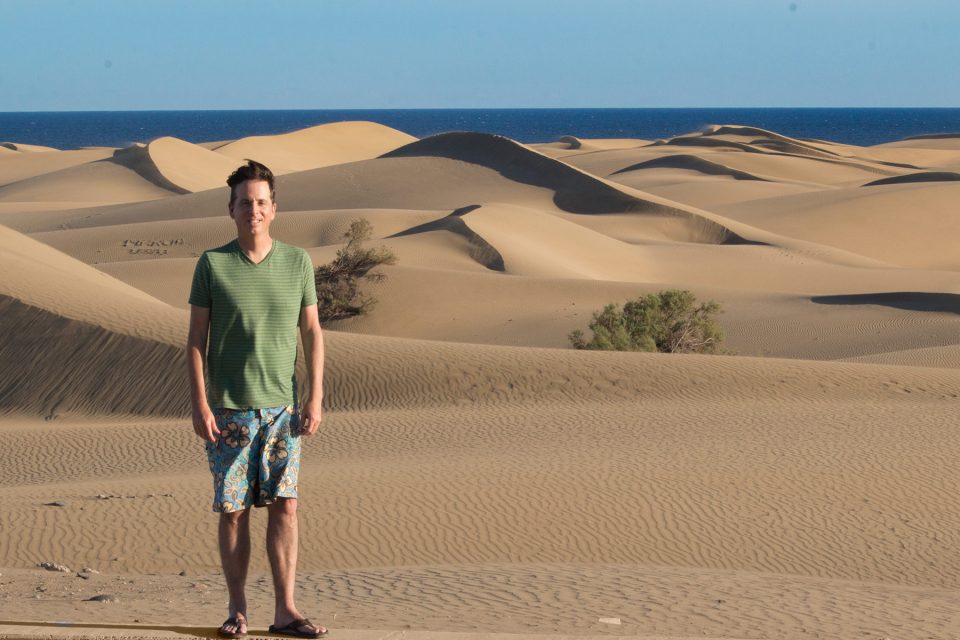 Location: On the southern coast of Gran Canaria in the Canary Islands

What’s Cool: Every dune-backed beach in the world claims to look “like the Sahara.” In the case of Maspalomas, it not only looks like the Sahara, it is a piece of the Sahara. These sands have blown in from Mauretania to create the ultimate Saharan beach. Pretty cool! 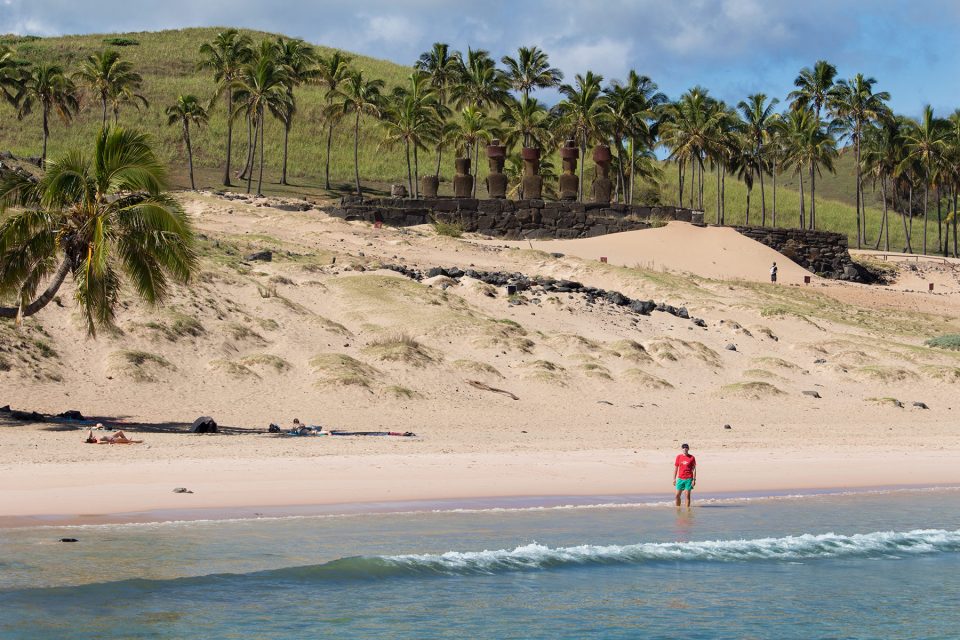 Location: On the northern coast of Easter Island

What’s Cool: Easter Island is NOT a beach destination. Most of the island is surrounded by steep, jagged volcanic rock and relatively rough water. This sweep of beautiful white sand with calm, glassy waters is the glorious exception. And at the back, the legendary moai (stone statues) stand guard over sunbathers. There is NO other beach in the world like it! 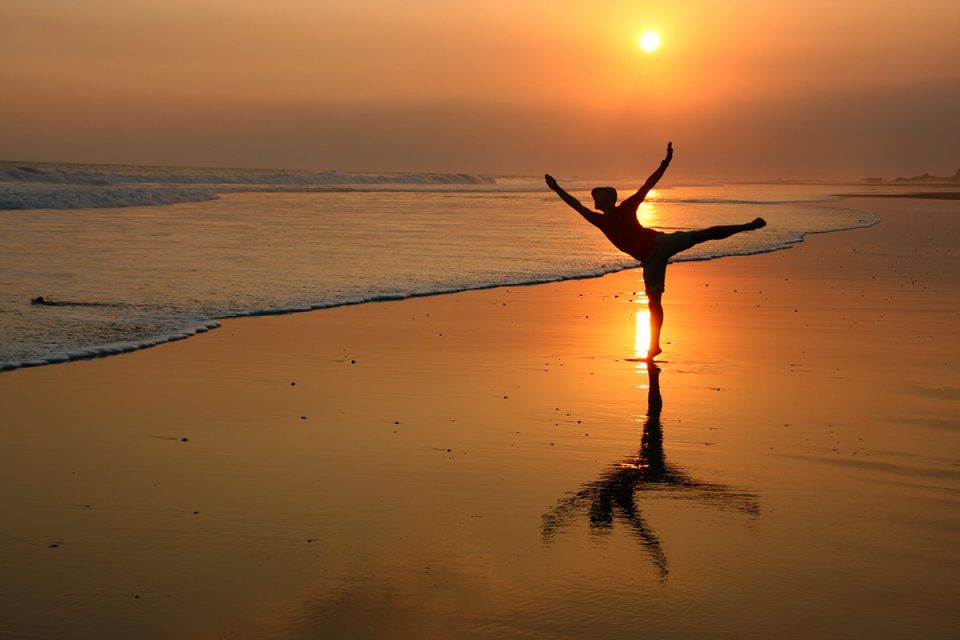 Location: On the west coast of Bali, north of Denpasar.

What’s Cool: This black-sand beauty is one of our favorites. There’s something so surreal about the volcanic Balian Beach at sunset when the jet-black sands transform into Indonesia’s biggest mirror. As the equatorial mists drift in among the palms, grab a camera or a coconut and watch the skies go bright orange. Clearly, Thomas was thrilled! 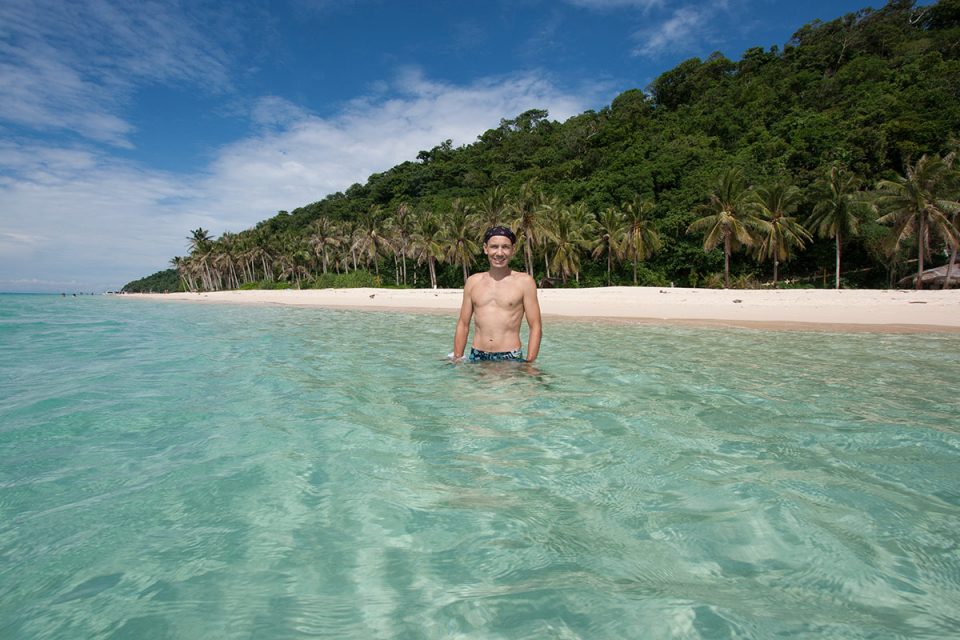 Location: At the northern tip of Boracay Island.

What’s Cool: Picture-perfect Puka Shell Beach is straight out of the brochures. The strip of powdery white sand recalls the glorious past of world-famous Boracay Island, the stuff of traveler legends. Yes, after years of overdevelopment and environmental abuse, some will rightfully complain that we are including a Boracay beach on our list of the best beaches in the world. But there is something truly unique about Boracay sands, and we pay homage to the one surviving stretch that Filipinos found the strength to protect. 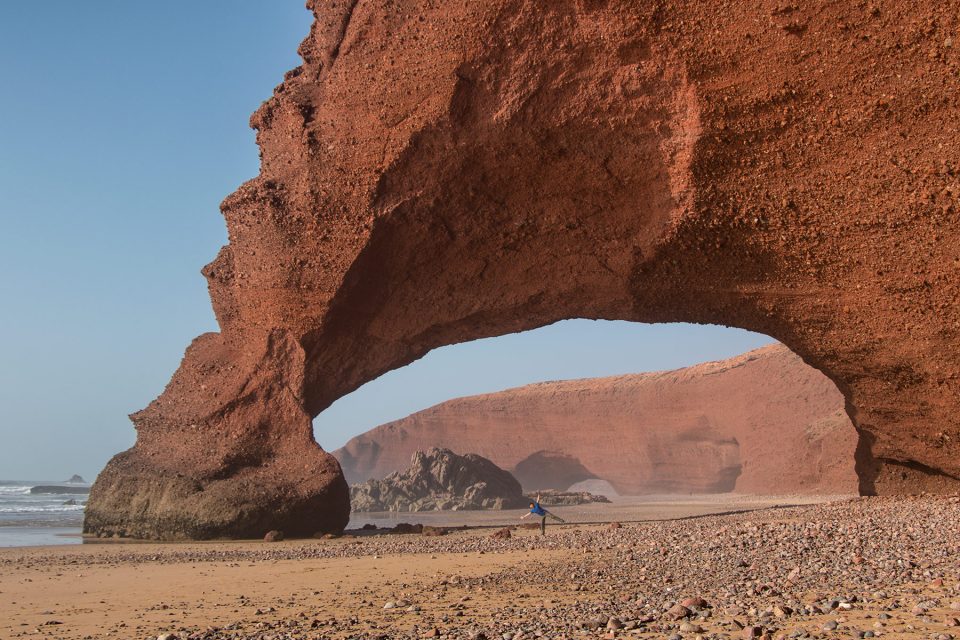 Location: Southwestern Morocco just south of the village of Mirleft.

What’s Cool: Remote Legzira is not nearly as famous as it should be considering the two ginormous natural arches that have formed on the surreal orange-sand Saharan beaches. The entire location screams mystery and adventure. (How has this beach not shown up in “Game of Thrones”, which frequently shoots in Morocco?) 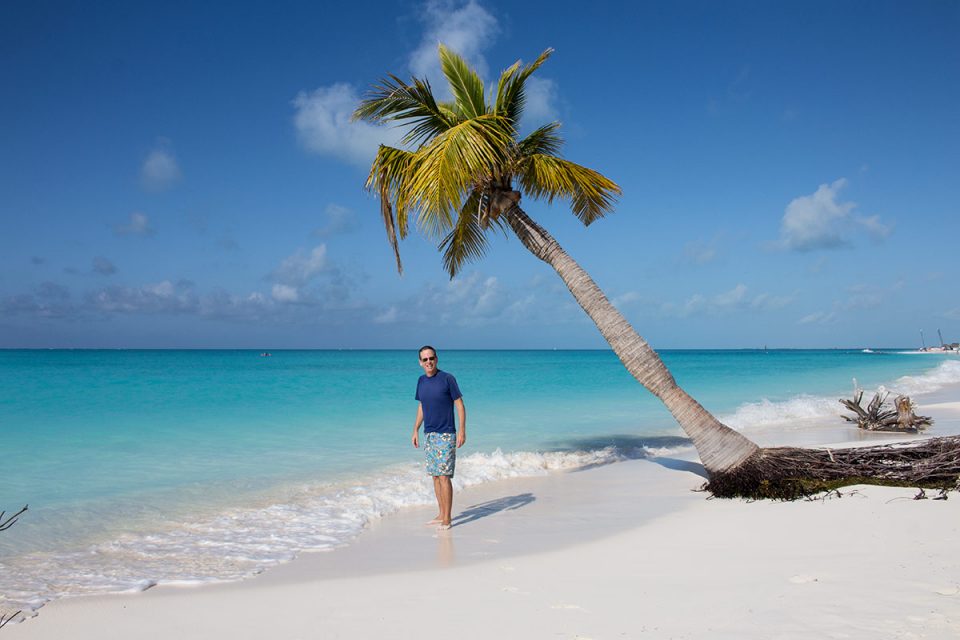 What’s Cool: Cayo Largo’s Sirena Beach is one of Cuba’s not so hidden secrets. Miles of fine white sand where Canadian and European tourists frolic au naturel in calm aquamarine awesomeness. One note on climate change: one Canadian tourist told me that 15 years ago, she could walk along this beach in the shade of palms. Today rising sea levels have taken all but this lonely palm off the beach… and I don’t know how much longer this little rebel will last. This picture is a piece of history! 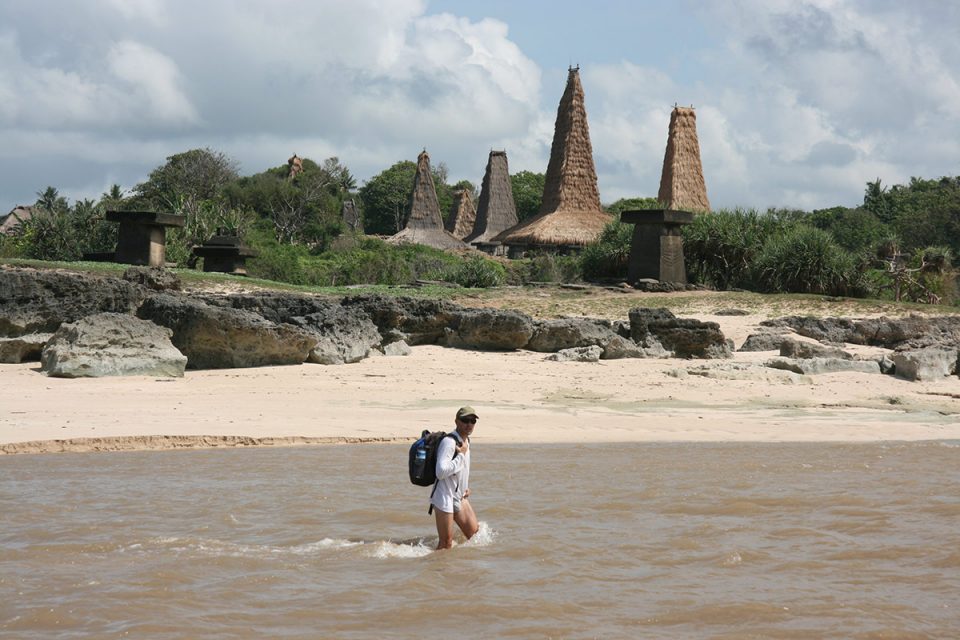 Location: On the western half of the island of Sumba in Indonesia.

What’s Cool: Ratenggaro feels like something out of an Indiana Jones movie with towering tribal huts rising up from the hills behind the beach and wild stone megaliths and wooden totems dotting the coast. Local tribesmen walk around with swords on their belts and, every now and then, they still use them, so be very cautious and culturally sensitive when entering villages. All of Sumba’s beaches define the word remote. 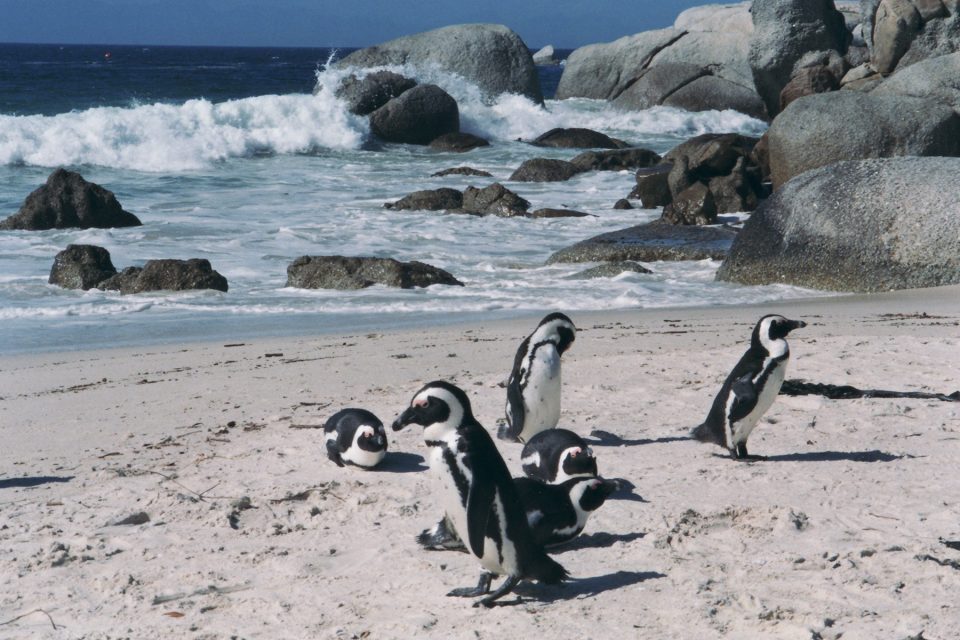 Location: In Simon’s Town, a small community south of Capetown

What’s Cool: This beach is all about the opportunity to view wild African penguins. The white sand and crystal waters are ringed with massive boulders making for the perfect National Geographic moment. And the penguins are hilarious! 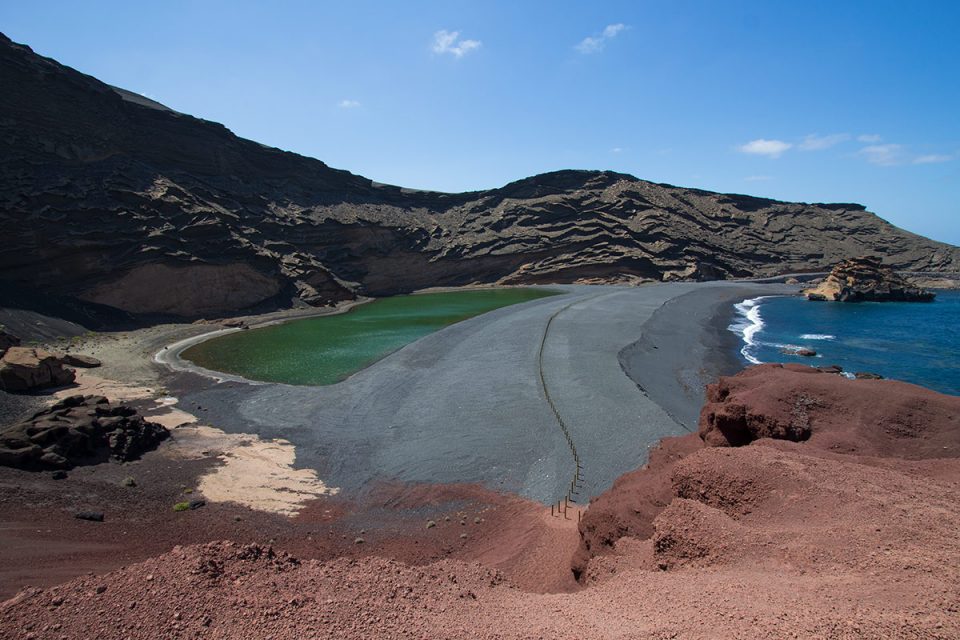 Location: On the southwest coast of Lanzarote Island in the Canary Islands just south of the village of El Golfo.

What’s Cool: Gnarled red and black volcanic cliffs, grey-black sand, cobalt blue waters, and a green volcanic lagoon make this one of the most unique beaches in the Canary Islands and the world. It feels like a beach on a distant planet. 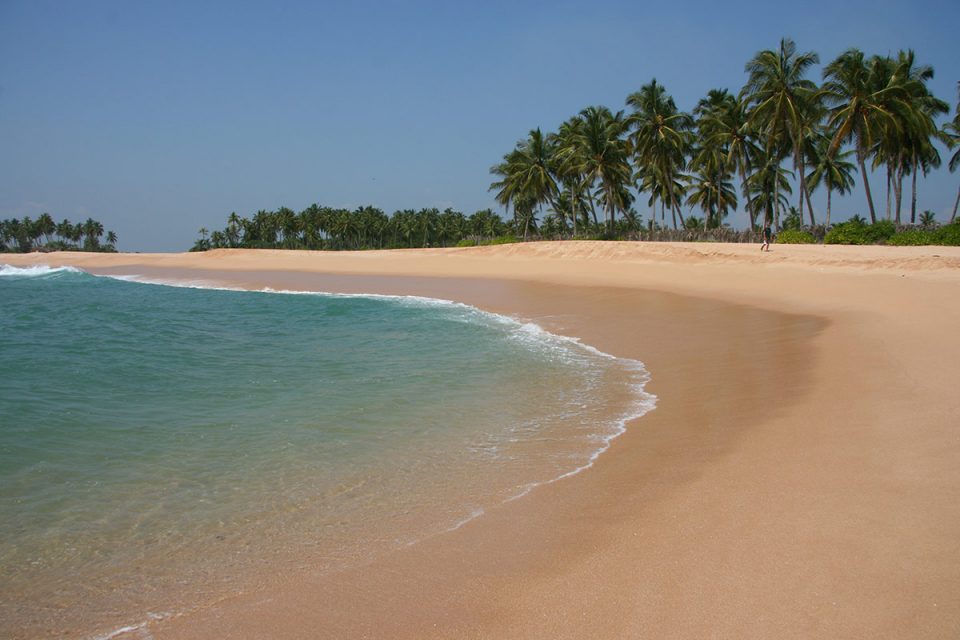 What’s Cool: Miles of stunning golden sand backed by swaying palms and shady pandanus trees, the remote sands of Tangalle are made for walkers. Wildlife enthusiasts will find troops of langur monkeys, giant monitor lizards, and a maze of mangrove waterways made for kayaking birders. One warning: the waves here can be savage, so swimmers should look for protected pools which form behind sandspits. 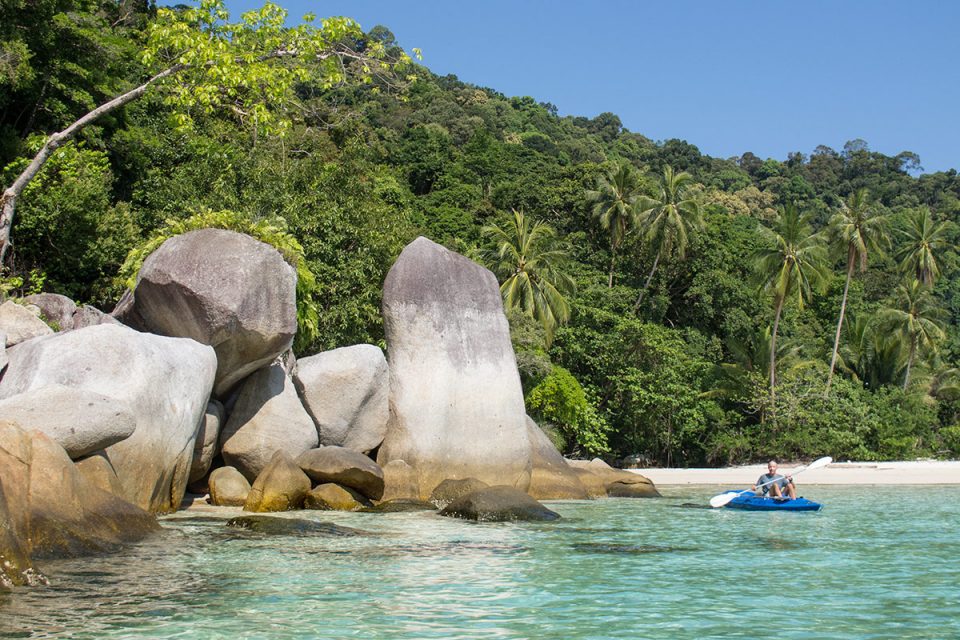 Location: On the west coast of Pulau Perhentian Besar, near the Perhentian Island Resort.

What’s Cool: The rocks and crystal waters of Teluk Puah Beach (and nearby bays) are a tropical dream. The clearest water we have ever witnessed was on one particularly calm day on this beach. Pure glass. We also saw a large sea turtle and tons of blacktip sharks in these waters, so bring your snorkeling mask or even consider diving Pulau Perhentian. 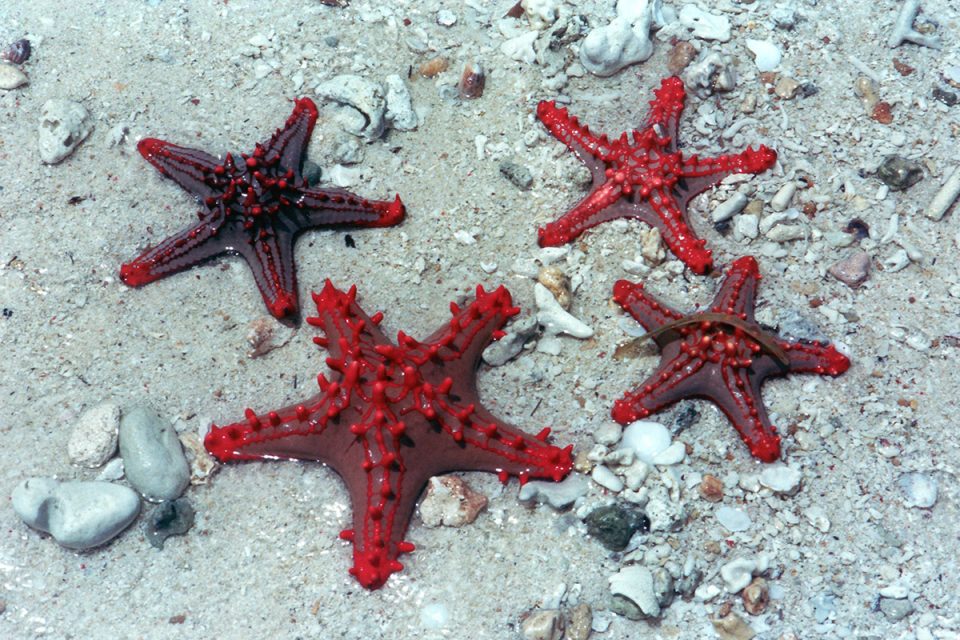 Location: The northern tip of Zanzibar Island in Tanzania.

What’s Cool: The sight of an African dhow drifting across the glassy turquoise waters of one of Africa’s most legendary islands. We also loved the bright red starfish that wash up on the coral-strewn shores. 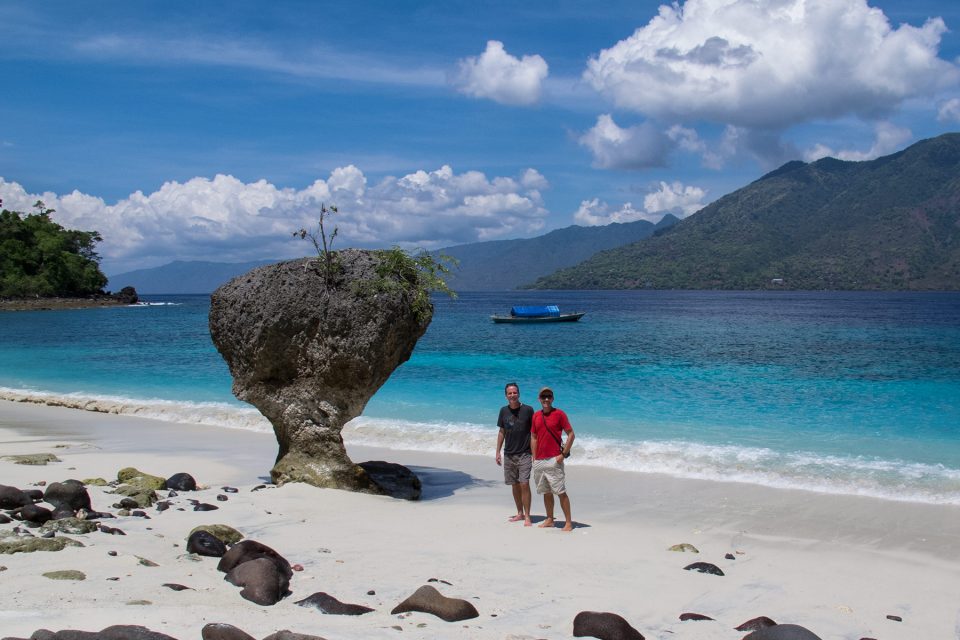 Location: On the southwestern coast of Alor

What’s Cool: This pristine white-sand beach defines isolation. Intrepid adventurers will be rewarded with a wild stone mushroom formation backed by ice-blue water and volcanic peaks. Bring a snorkel and a coconut to get the full Robinson Crusoe experience. 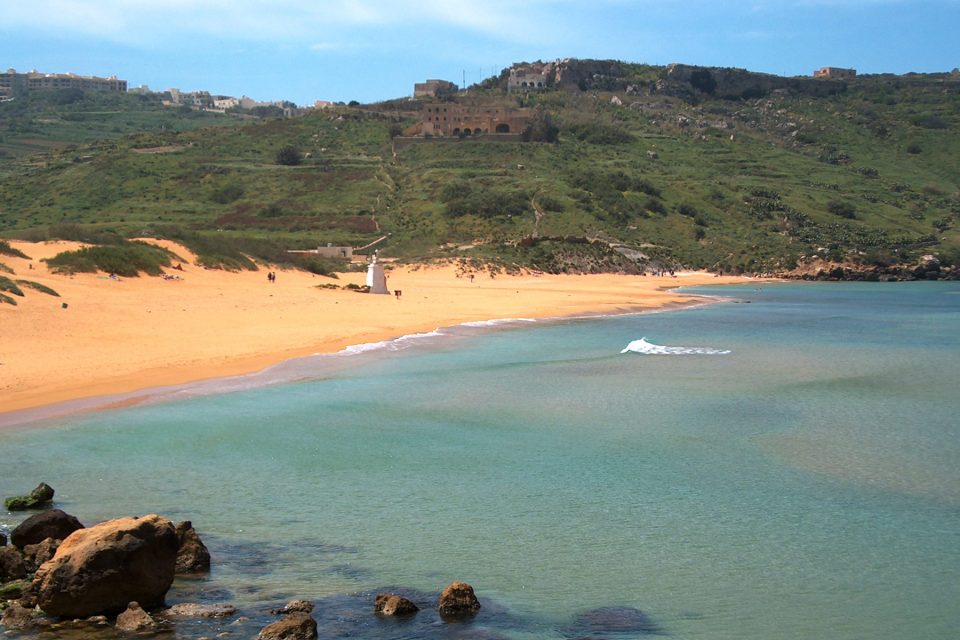 Location: On the northern coast of the Maltese island of Gozo

What’s Cool: Glowing neon orange sand would be enough, but if you walk down the beach around the bend, you’ll find some great rock formations and giant tide pools where you can take an isolated dip. Beautiful. 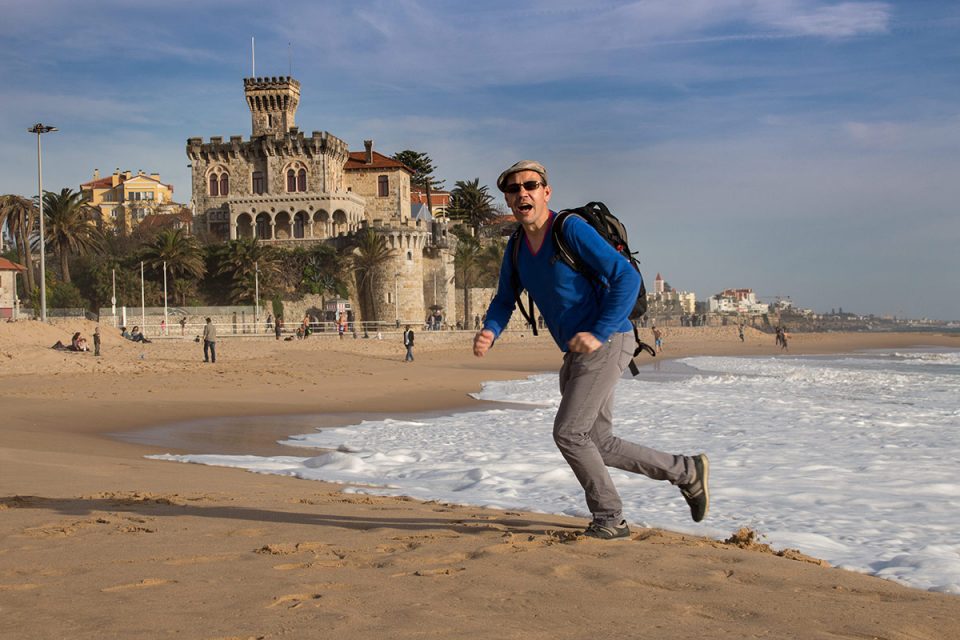 What’s Cool: In a country filled with perfect beaches, this relatively urban choice may seem strange. But where else can you lie on the golden sand and gaze up at a Portuguese castle sitting smack-dab on the beach. Also loved the great coastal walk from Cascais all the way down to the cliffs of Praia da Azarujinha – there are plenty of beautiful coves to discover.

Location: In front of the ranger station on Koh Adang in the Tarutao National Park in southern Thailand.

What’s Cool: Can you imagine standing on a white-sand beach and diving straight into the water? Due to the way the steeply sloped sandspit has formed, you can do just that. It’s literally the ultimate natural swimming pool, and one of Thailand’s coolest beaches. We spent the whole day doing cannon balls and diving headfirst into the gorgeous water. But be warned: the shape of the sandspit is constantly evolving, so the formation may not be the same when you visit. If it’s not, wait for the next rainstorm and try again. (This sandspit is not to be confused with the one on neighboring Koh Lipe.)

These are just the first 20 beaches on our expanding list of best beaches in the world. We will be adding many, many more in the future. And ranks will shift as we add new entries. Tell us about your favorite beaches around the world in the comment section below.

8 responses to “The Best Beaches in the World”