Visiting the whale sharks in Donsol is easily one of the world’s most incredible wildlife adventures. Known as the “whale shark capital of the world,” for once the marketing appellation holds up. No place on the planet boasts such predictable whale shark encounters. Understandably, Donsol is the holy grail for sea life enthusiasts. 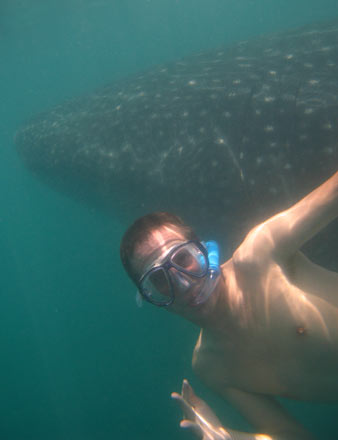 Indeed, Donsol is the entire reason we came to the Philippines. We studied whale shark sighting statistics online and scheduled our trip accordingly to coincide with the peak month of April. Diving with the dinosaur-sized sharks, the largest fish in the world, is a serious contender for the coolest thing I’ve ever done. For a wildlife freak like me, this was the ultimate pilgrimage.

Whale shark tourism is a mixed story for the sharks themselves. The power of tourist dollars has shut down whale shark hunting as locals realized the beautiful animals are worth far more alive than they are dead. They even celebrate the sharks with the annual Butanding (whale shark) Festival including a parade and Ms. Butanding beauty pageant. (Really, does any woman want to be known as Ms. Whale Shark?)

Unfortunately, Donsol is too amazing for its own good. As more and more people discover the town, Donsol is going to be in serious danger of drowning under the weight of its own uniqueness. The World Wild Life Fund has assisted Donsol in establishing a set of guidelines to protect the sharks and maintain their natural behaviors. The rules range from not riding or impeding the path of the shark to limiting each encounter to one boat with six passengers.

Unfortunately, over the course of the four days we spent diving with the sharks, we personally witnessed all of the rules being broken. In fairness, some rules, such as the recommended distance of 3 meters, are unrealistic due to the plankton-filled waters and the unpredictable movements of the sharks. At times, it seemed like the sharks were actually following me as I swam. But other rules, such as not touching the shark or impeding its path, were not only broken by visitors but by the guides themselves. And on more than one occasion, I found myself screaming a stream of four-letter explicatives at stupid boat captains who pulled in front of the whale sharks forcing them to dive as well as bringing their boats dangerously close to snorkelers.

A second problem comes from allowing people uncomfortable with open water to swim with the animals. More than once we encountered Filipino and Chinese groups in bright-orange life jackets who were EXTREMELY spastic in the water splashing around in a manic frenzy screaming like the whale sharks were chewing off their legs. Underwater, I witnessed these groups kicking at the sharks and grabbing at their dorsal fins.

One insane woman actually grabbed on to my swimsuit and apparently thought I would drag her along for a free ride. She probably got the idea from the remora fish which latch onto the sides of the whale sharks. Without getting graphic, let’s just say she won’t ever do that again.

So is the Donsol whale shark experience a total nightmare? Absolutely not. Over the four days we spent out on the water, we got in 22 swims, most of which were wonderful. On two occasions, I even had a whale shark completely to myself. There’s nothing more magical than gliding through the water with a 20-35 ft leviathan just feet below.

And there is a lot that visitors can do to improve the situation. Insist on following the rules laid out by the World Wild Life Fund. If your boat captain gets lazy and decides to try to steal someone else’s shark, ask him to follow the one boat per shark policy. (This takes a lot of will power, but having your own shark usually provides a better experience and it will be less likely to dive.)

And one note of caution for Donsol visitors. As many rules are being broken, it is easy to get lazy and assume they are all pointless. Swimming under the whale shark or very close to its tail can be risky, and we saw first hand what could happen. While gliding along next to the dorsal fin, I started to slowly slide back until I was just above the tail. At the same time, one of my boat mates dove down alongside the shark and, for some reason, the whale shark was startled. In a split second, the slowly moving beast dropped on its side, whipped its tail with unexpected speed, and shot into the depths. For me, the crazy move played out like a scene straight out of Jurassic Park with the incredibly strong tail whipping by me with tremendous strength. Interestingly, I had the distinct feeling that the shark was aware of my location and had gone out of its way not to hit me. We had snorkeled with more than 15 sharks at that point and I had assumed they could only move slowly. I was clearly wrong.

Swimming with the sharks is the closest thing to a spiritual experience that a non-religious person like me can have. The awesome power of the sharks coupled with their gentle presence can be absolutely overwhelming for those of us who worship the miracles of nature. Yes, Donsol dive captains are an imperfect breed and there is room for much improvement. But as with the mountain gorillas in Africa, tourism may be the only way to save these magnificent creatures.

Whale shark encounters are good value. Boats cost 3,500 Pesos ($77) and can be shared by a group of up to 6 people. In addition, a registration fee of 300 Pesos ($6.50) for foreign visitors is required, which allows visitors to book boats for up to 5 days. Snorkeling gear can be rented on site for 300 Pesos ($6.5o) per day.

Whale shark season is approximately from December to June, although the best months are February to May. If you are headed to Donsol during the Filipino summer holidays from March to May, especially on weekends and during holidays or festivals, make your boat reservation for the whale shark trip at least one day in advance at the Donsol Visitors Center.

One response to “The Whale Shark Encounter”