Thomas slides the paddleboard off the muddy riverbank into the slow-flowing river.

“What about piranha?” I ask as Thomas climbs onto the board, “This isn’t going to be like one of those ’70s horror movies if we lose our balance, is it?”

“No, piranha almost never attack people, especially in rivers,” answers our guide Pepe smiling at what is clearly a common question, “Those horror stories you hear are usually rare cases where piranha have been trapped in small bodies of water. I’ve been swimming in these rivers for years, and nothing has ever happened to me.”

Confident that bad balance won’t prove fatal, I push my paddleboard off the bank and follow Thomas downriver. Pepe and Angel, our sports guide, follow. The scene is like something out of a movie: a winding jungle river, steep red-clay riverbanks, a towering canopy of rainforest trees. Two scarlet macaws fly overhead and a chorus of gurgling oropendolas and squawking parrots provide the perfect soundtrack for paddleboarding along the Tambopata River. 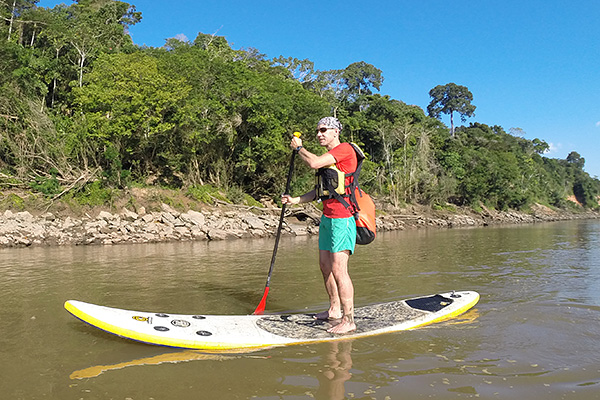 The words jungle and adventure are almost synonymous. For most people just coming to the southern Peruvian Amazon would be an adventure in itself. But other people like their adventures just a bit more adventurous. For that reason, Rainforest Expeditions has put together an exciting multi-sport option which blends the natural attractions of the Tambopata region with a cool series of adventure sports meant to highlight the jungle experience.

Our ten-day multi-sport jungle odyssey will take us from Puerto Maldonado via the Refugio Amazonas to the Tambopata Research Center and return via the Posada Amazonas. The itinerary includes a range of activities from late night explorations of the rainforest to jungle mountain biking. 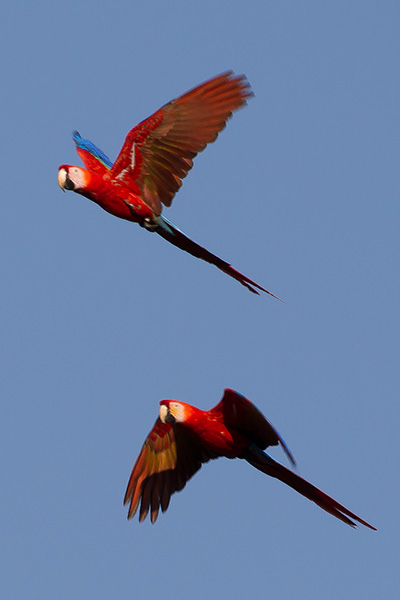 “Let’s paddle to the beach on the other side of the river,” says Pepe. Thomas, Angel and I follow along the sandy beach scanning the sand for peccary or tapir tracks. In the distance, sudden yelping and rustling foliage reveals a troop of dusky titi monkeys leaping through the trees. More macaws backlit by the setting sun glide across the river. Pepe identifies them as red and green macaws.

Floating gently, silently across the water gives us a chance to examine the small details, to look for frogs and caimans, to search the trees for sloths and riverine birds, to stop and listen to the songs of the jungle.

The Jungle is the Ultimate Thrill

It is true that the ultimate adventure is the jungle itself. On the trip upriver from Puerto Maldonado to our first stop at the Refugio Amazonas we spotted caimans, a capybara, and flocks of macaws and parrots. Walking from the small dock to the lodge, night monkeys leapt through the trees around us. Sitting in the Refugio’s open-walled reception, I spotted an agouti and its baby nibbling on Brazil nut pods that had fallen near the entrance. And that was all before our first real hike. 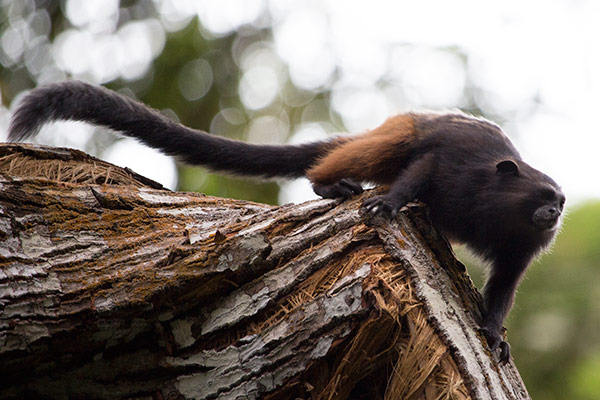 Now out on the trails exploring the forest, the Amazon reveals its treasures to us much more easily than most jungle destinations we have visited. Saddleback tamarins shoot through the trees ricocheting from limb to limb like simian bullets. A paca dashes across the path and flees into the bushes. A yellow-headed vulture eyes us from above. There’s wildlife everywhere if you walk silently and keep your eyes peeled.

At night, we head out in boats to search for more caimans. It feels like they’re everywhere. “Were they watching us paddleboard along the river?” I ask myself. Our guide assures us that white caimans may occasionally bite, but they don’t devour whole. Well, OK then! 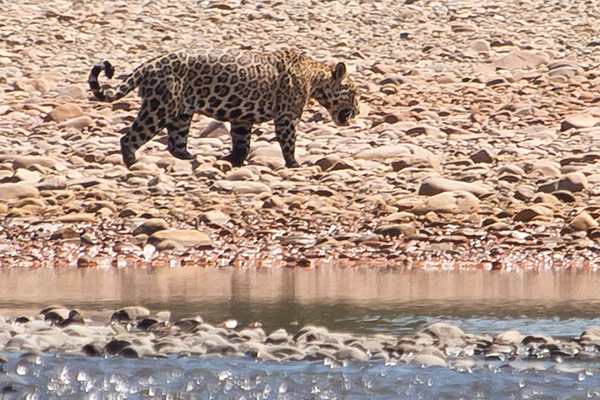 As we travel further upriver into the reserve zone towards the Tambopata Research Center, we score the ultimate jungle prize: a jaguar walking along the banks of the river in the middle of the day. What are the chances? Jaguar sightings are by no means guaranteed, but Rainforest Expeditions keeps records of wildlife sightings, and they estimate 13% of their visitors have seen a jaguar near the Tambopata Research Center (TRC) in the last year. Now that’s one heck of an impressive statistic.

Within the reserve zone at the TRC, the density of the wildlife is unlike anything we have encountered. (The only place that comes close is the Kinabatangan River in Borneo, but Tambopata is FAR more pristine.) The Colpa Colorado, perhaps the most famous clay lick in the world, treats us to a birdwatching extravaganza that should leave the most jaded twitcher speechless (described in Birders Flock to Tambopata). 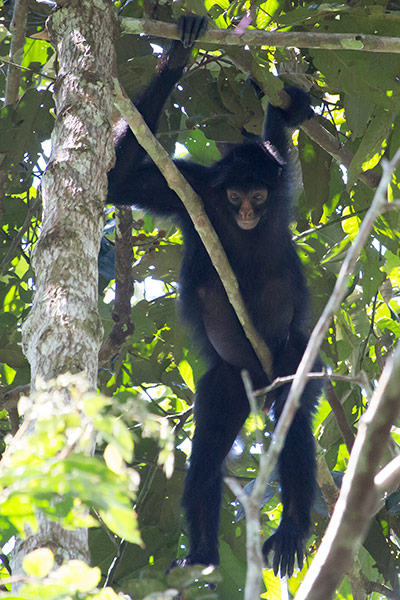 The mammals are equally plentiful. We spot troops of brown capuchin monkeys, and further along black spider monkeys perform their death-defying acrobatics in the limbs above. I feel something watching me from behind; I turn to discover an ocelot eying me from deep within the undergrowth.

Toucans lurk in the branches and follow our steps as we tip-toe into a large herd of white-lipped peccaries. The strong, musky scent is obvious. Alerted to our presence several large peccaries clap their tusks together in a threatening display meant to scare us off. It doesn’t work. 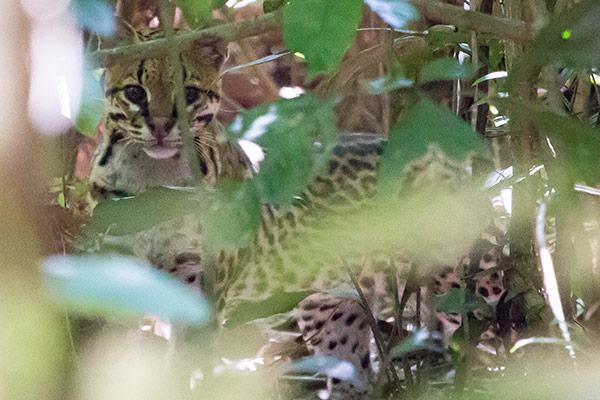 In the distance, red howler monkeys add their eerie monster howls, which echo through the forest. One by one, more howlers join in until the calls congeal into one reverberating banshee moan punctuated with a percussion of peccary tusks. It’s a ghostly, spectacular moment which sends chills down my spine. Yes, the jungle is the ultimate thrill… or is it?

Climbing to the Canopy 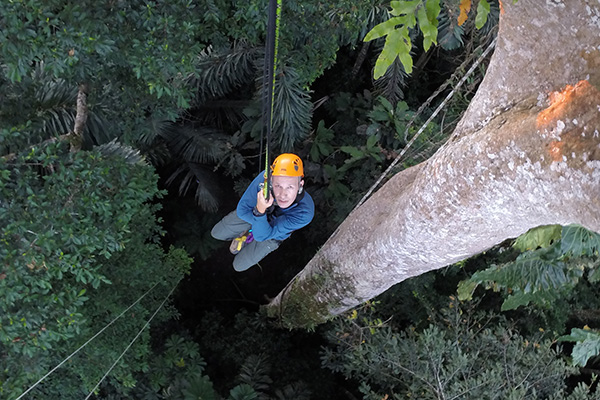 “I’m exhausted!” I yell, dangling midair off the bough of a mammoth ironwood tree, “It’s like climbing a giant sand dune, the top isn’t getting any closer.”

“You can do it. You can do it!” chants Pepe from the small research platform in the tree above. He really is the eternal optimist.

“You’re only halfway up,” Thomas laughs from the jungle floor below, “You still have 15 meters to go.”

Angel is silently supportive, but I can tell Mr. Fitness is cracking up inside. It is pretty funny; I must look like the world’s biggest, sweatiest Christmas tree ornament. I’ve been hanging here forever. I push the Petzl ascender up another foot and a half. I’m exhausted again.

I slowly inch my way up. If there were a sloth in this tree, it would race by me, but I am determined to sit in the crown of a jungle giant. Ever since the movie “Medicine Man” starring Sean Connery introduced the idea of a canopy climb to the world, I have known I was going to do this. 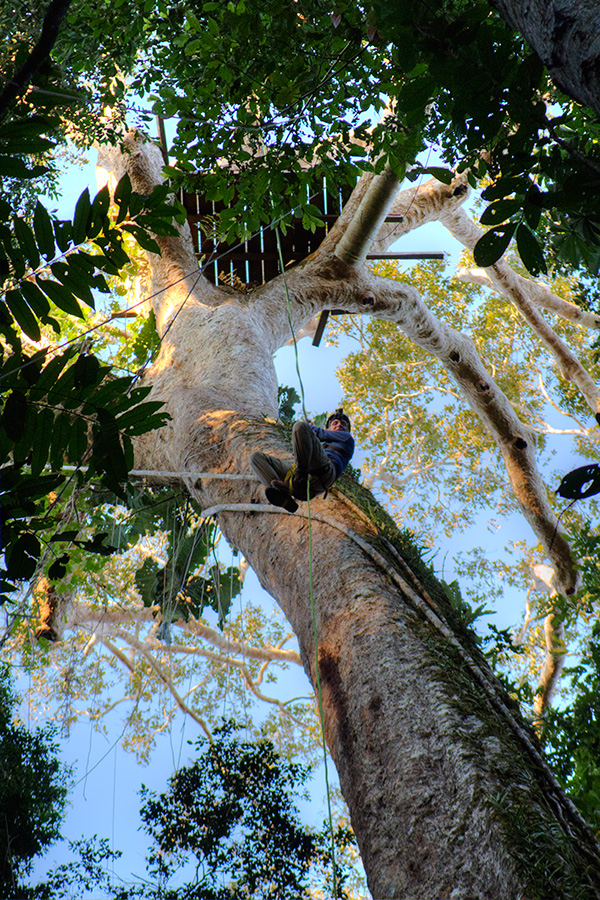 After 30 minutes and 100 feet, I drag myself onto the tiny platform. Two rare blue-headed macaws fly by, the perfect reward for a determined climber with appalling upper-body strength. A group of scarlet macaws circles the tree; Pepe recognizes them as a group of hand-raised chicks from an experiment in the ’90s. “Chicos, chicos,” he cries, greeting old friends.

Thomas races up the tree in half my climbing time. Considering that he has struggled with a serious fear of heights his whole life, I am perplexed at how fast and effortlessly he seems to be moving. My embarrassment turns to sympathy and admiration as he pulls himself onto the platform.

The look on his face was clearly that of someone who has fought his way through fear. His left hand is bloody; he has literally rubbed his hand raw. “I just wanted to get up here as fast as possible,” he announces in understated German tone as he finally starts to breath again. 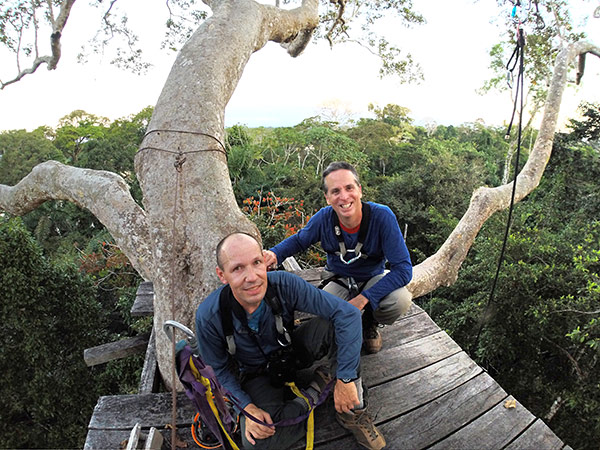 The chicos swoop into the limbs above us as the sun dips into the forest. We have timed our climb perfectly. Flocks of mealy parrots, blue-headed parrots, chestnut-fronted macaws, red and green macaws, and blue and yellow macaws pass. We rest comfortably in the palm of the ironwood giant’s hand. It’s an Avatar moment on Earth, one of the most memorable experiences of my life (and for sure of Thomas’ life, too). Darkness falls as we lower ourselves to the ground. What adventure does the jungle night hold for us?

Things that go Bump in the Night

“I found one! Look, there near the base of the tree,” Pepe whispers excitedly, “It’s coming out of the hole.”

“Oh my god!” I scream in my head. It’s Aragog! (Or Shelob for “Lord of the Rings” fans.) It’s the mysterious chicken eating spider, a species only recently identified and studied by scientists. The spider challenges much of what we know about tarantulas; the monster has more in common with the mythical Harry Potter beast than one might guess. It’s the biggest spider I have ever seen in my life – ginormous – and it’s beautiful (at least to me). But the chicken eating spider is just one of many reasons a night walk in the Tambopata Reserve is absolutely essential. 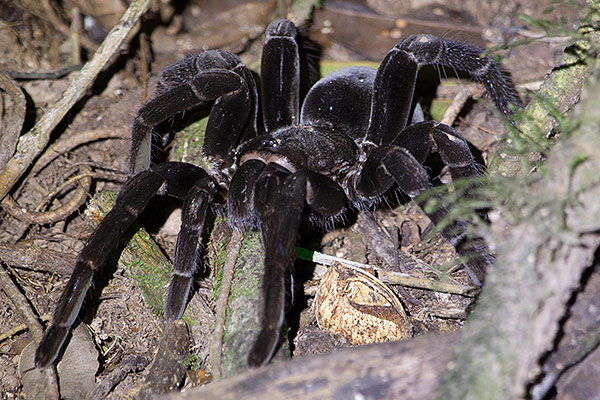 We continue along the trail probing in bushes, eyeing tree bark, exploring piles of dry leaves between buttressed roots. Here Thomas’ skills come into play as well as Pepe’s. Thomas loves the small stuff… insects, arachnids, frogs… and he has an exceptional eye for the creepy crawlies.

We find a three-striped poison dart frog, pink-toed tarantulas, a cane toad, zombie arthropods being devoured by the Cordyceps fungus, blunt-headed tree snakes, and a variety of beautiful moth and tree frog species. Bats flutter through the trees; one even smacks into my face giving me quite a scare. Invisible night monkeys leap through the trees around us, their eyes illuminated in our flashlight beams. The night jungle is another world full of mysteries. 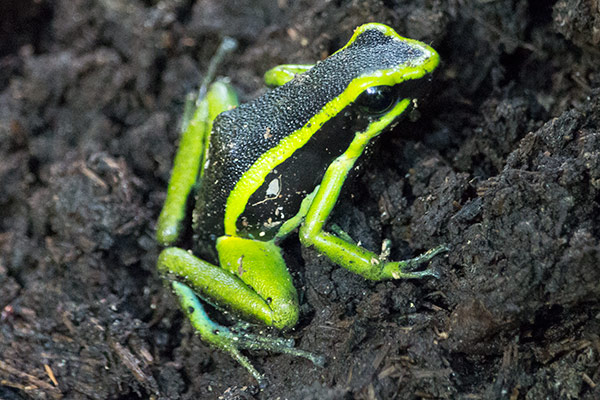 “Look as this,” says Pepe with a tone that ensures us he is about to blow our mind. He has an odd looking insect in his hand. “Touch it.”

I touch the inch-long insect and it clicks and pops up in Pepe’s hand like a Mexican jumping bean. Pepe shines his flashlight on the insect for a few seconds before switching it off. Two illuminated “eyes” stare back at me; they are bioluminescent dots on the insect’s back. The jungle can be dangerous at times, but it also has a great sense of humor. That’s why I love it.

Day five of our 10-day jungle adventure and we’ve seen and done so much. We’ve paddleboarded and climbed an ironwood tree to explore the canopy. We’ve visited the extraordinary Colpa Colorado and the Chuncho clay licks. We’ve explored the forest during the day and at night. What more could we possibly do? As it turns out, quite a bit!!!

TO BE CONTINUED IN PART 2…

During our foray into the Tambopata region we stayed in three lodges run by Rainforest Expeditions. The experiences described in this first post and shown in the attached video took place at the Refugio Amazonas and the Tambopata Research Center. 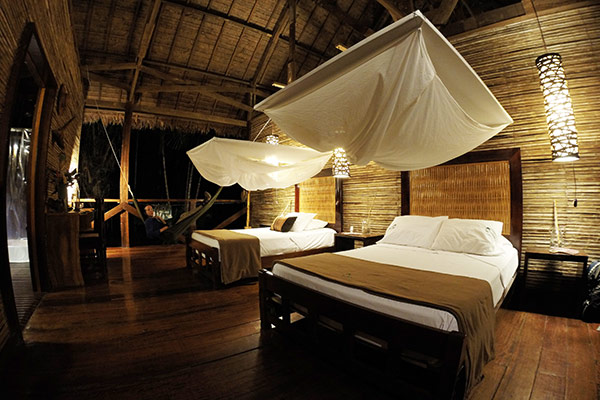 Rainforest Expeditions’ lodges are all similarly constructed to enhance the wildlife and birding experience. Bedrooms are designed with one wall open to the jungle, and all public areas in the lodges are constructed without walls, which means you can be scouting for animals during your whole stay. Very cool! 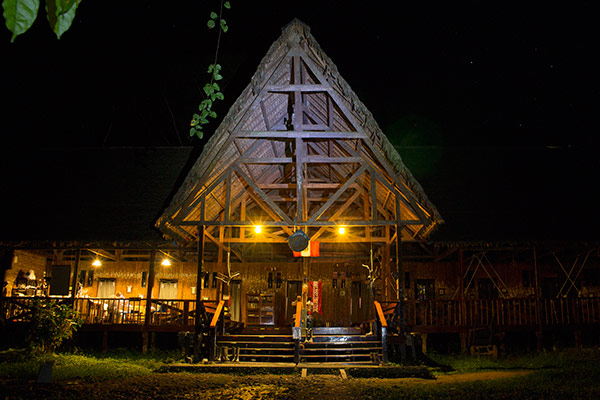 Disclosure: While staying in the Tambopata region, we were guests of Rainforest Expeditions. However, all of the opinions expressed here are our own.