The Tombs and Treasures of Chiclayo 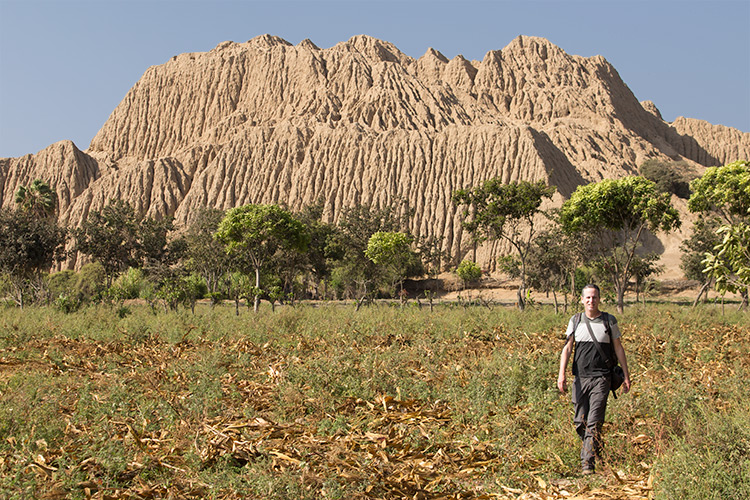 If it seems from our previous posts that all of northern Peru is one vast burial site, that’s because – well – it kind of is. There is literally buried treasure everywhere. Unfortunately, a lot of it is being dug up by grave robbers who sometimes hit the markets to hawk their booty.

So in 1987, when archaeologist Dr. Walter Alva suddenly discovered a surge in black market plunder, he realized that those grave robbers had found something special. His quick thinking and investigative instincts led him to what has been labelled the King Tut’s tomb of Peru, the treasures of the tombs of Sipan. 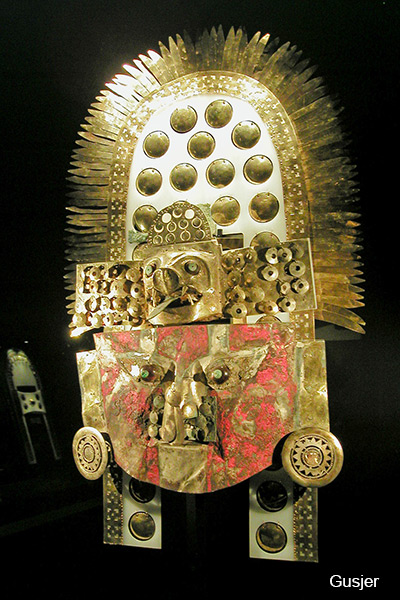 Today most of those treasures are kept in the Museo Tumbas Reales de Sipán, located in Lambayeque just 11 km from Chiclayo. The museum is one of the most famous in Peru, and its collection of treasures are considered one of the most important finds ever in the Americas. For obvious reasons, this museum is the touristic focal point of the region.

The excellent collection provides incredible insight into the elaborate rituals and extraordinary garb of the Moche culture. (They are quickly becoming one of our favorite cultures in Peru because they left behind so many great things. Remember that weird penis vase?) The museum presents display after display of elaborate headdresses, masks, nose rings, mouth shields, ear plates, and necklaces. It’s a sea of gold, silver, copper and semiprecious stones. Unfortunately, photography is not allowed, so we can only show you the open-source image above and the Peruvian documentary embedded below, which has some great footage of the treasures.

Highlights include an amazing necklace of giant gold peanuts, a monster headdress, a breastplate with a sharp-clawed demon creature, and detailed reconstructions of the tombs. The actual museum building is also kind of interesting because it is a modern take on a Moche pyramid. Unfortunately, signs are mostly in Spanish, so bring your dictionary or get an English-speaking guide. After a year in Latin America – a region that seems to hate translating anything into English – our archaeological vocabulary is getting pretty good (at least in written form).

There’s also a truly odd but kind of spectacular life-size automated diorama of figures decked out in full Moche regalia. It’s kind of like that old Disney attraction with the robot presidents. (Do they still have that?) The diorama figures twitch robotically causing their jewelry to jingle and reflect in the light. It’s seriously über-cheesy, but I sort of loved it because it really brought to life the insanely ornate world of the Moche culture. It was also really fun to watch Peruvian kids’ eyes light up when they saw the automated figures. When you grow up near Disneyland, it’s easy to forget the whole world doesn’t get to see stuff like that every day. We, on the other hand, don’t grow up in a world of massive adobe pyramids and tombs full of treasure. 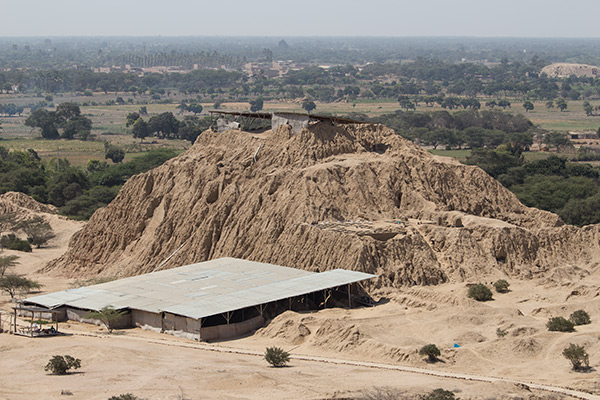 Speaking of pyramids, Chiclayo makes for prime pyramid hunting ground. With Batan Grande, Sipan, and Túcume, there are plenty of sites to choose from. We caught a colectivo up to Túcume for the day to check out another of Peru’s oft-bypassed treasures.

Even as we drove into the dusty outpost town, we could see a massive adobe pyramid rising out of the burbs. Two kilometers east of the central plaza, the official archaeological site boasts another 26 pyramids built by the Sican, Chimu and Inca cultures. If that’s not impressive enough, the surrounding valley has a total of around 250. When we said the Chiclayo area had pyramids, we weren’t joking! 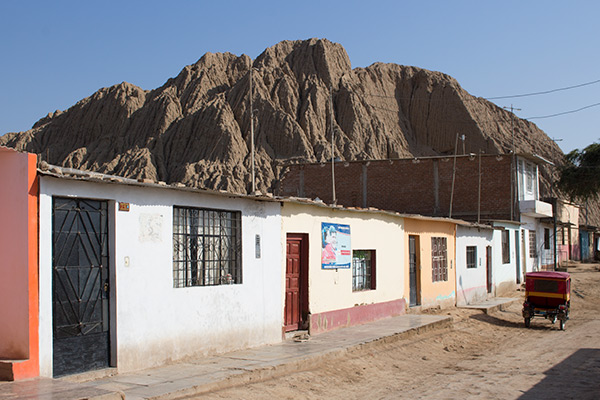 So why did we say “around 250”? The answer to that question becomes clear as you approach the archaeological site. Since the pyramids are made of adobe, over time they have eroded and melted together into big blobs of mud. With some of the constructions, it’s not entirely clear where they begin and end. 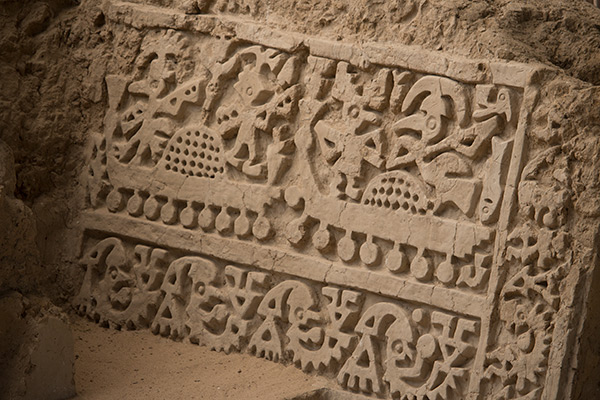 While that might sound a bit like a major pyramid anti-climax, walking through a city of massive eroded adobe structures can be quite a surreal experience. The fissures created by water run-off give the pyramids an amazing textured appearance that causes visitors to look twice. Is that an unnaturally angular desert mountain or a strangely organic building? There are also a few surviving reliefs with bits of color that recall that long ago the Sican and Chimu cities were full of beautiful, colorful art. 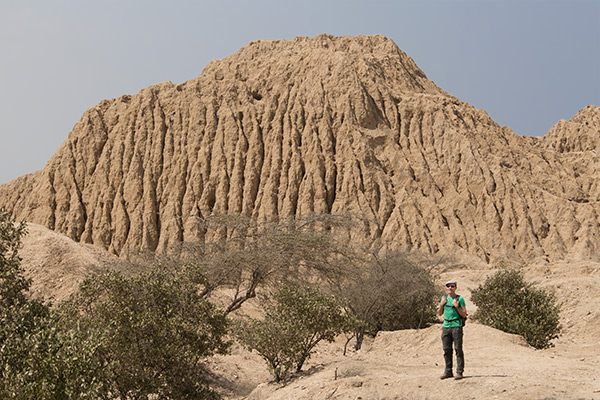 Those who lack creative vision may dismiss the ancient city as a huge pile of mud. We, however, found Túcume fascinating. Follow the trail up rocky Purgatory Hill to comprehend the scale of the site and to reflect on the hill’s sordid past. On this very spot, Spanish missionaries dressed as demons threw native Peruvians who were unwilling to convert to Christianity to their deaths. Apparently, the ancient Peruvians weren’t the only ones to practice human sacrifice. But those days of magic and sacrifice are long gone… or are they? 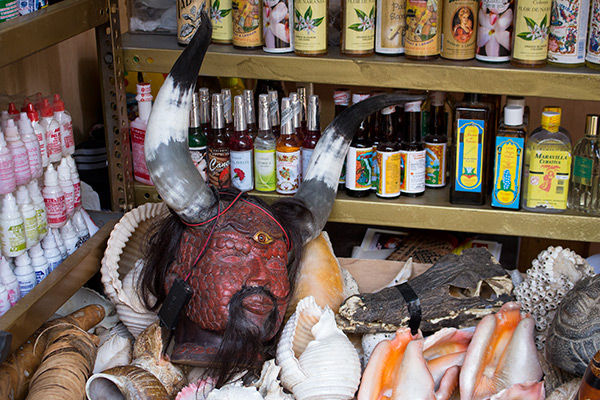 We decided to head down to Trujillo’s Mercado del Bruho, or the Witch Doctor’s Market, to see exactly what was on offer in the 21st century. Located in the southwest corner of the Mercado Modelo, the Mercado del Bruho features stall after stall of anything you might need to cast a spell on your neighbor, whip up a love potion or fulfill any of your other magic needs. 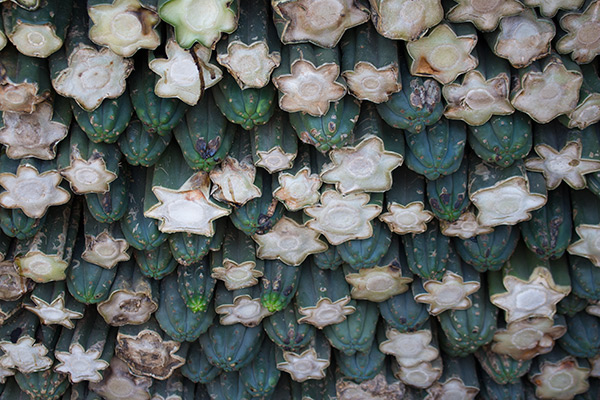 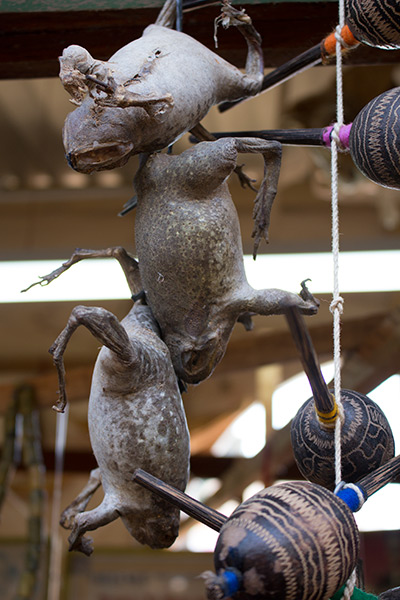 I was a bit shy with my camera as I was looking through the market because I wasn’t entirely sure what was legal and what wasn’t. Thomas was distracting one salesman while I was trying to get a picture of some dehydrated frogs and ritual maracas when he suddenly got pulled into the back. I quickly followed to discover the stall owner unwrapping stone idols, pottery and amulets which had been looted from tombs in the area. We flashed glances at each other signalling, “We need to get out of here now,” and shot right out the back door of the stall. Apparently, Professor Alva needs to pay a few more visits to the local markets. 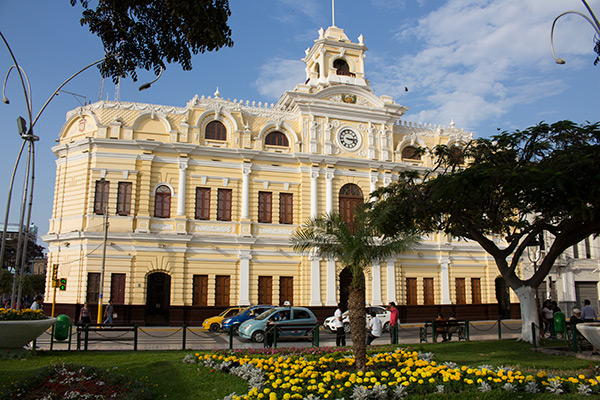 Chiclayo was full of little surprises including some great colonial architecture, more delicious local food, and an unexpectedly nice mall where you can catch a movie or enjoy a soft-serve ice cream in the desert heat. But beware, if you go for the ice cream, you could knit an entire sweater by the time that guy picks up the cone, fills it with ice cream and decides how to operate the cash register. And what would you do with the sweater? It’s hot here. Snarkiness aside, we thought Chiclayo was a great off-the-beaten-track destination, which – like everything in the north – feels like the real Peru.

Thanks to Casa Andina 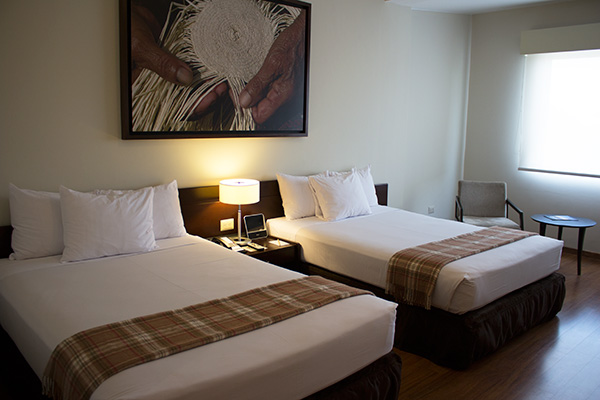 We want to thank Casa Andina Select Chiclayo for hosting us while we explored the archaeological treasures of Chiclayo. We had a wonderfully large superior twin room with good WiFi and comfortable beds. That’s really what we value most. Of course, the gorgeous swimming pool, gym, sauna, boarding pass printers, free airport transfer and the fantastic breakfast buffet certainly didn’t hurt. 🙂 I especially loved the sound-proof windows, which given the central location in the city, was a true luxury. 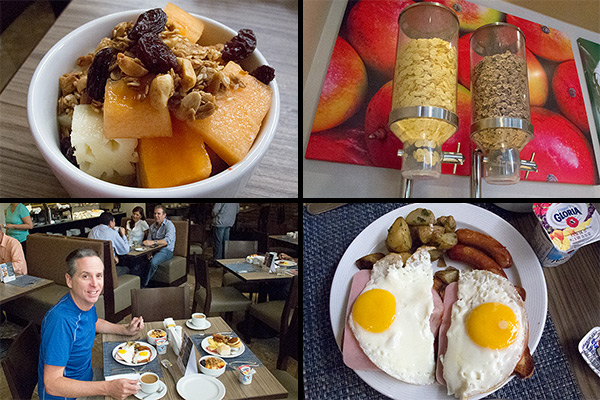 Casa Andina offers three different categories of hotels from the economical “Classic” to the mid-range “Select” to the luxurious “Private Collection”. In Chiclayo, we had the chance to stay at their Select brand, a sleek and modern hotel that feels very open and airy. The iconic building, the former Gran Hotel Chiclayo, was completely revamped by Casa Andina and now offers 130 comfortable rooms with lots of little artistic touches.

In addition to the rooms, we also loved the common areas, especially the pool terrace surrounded by palm trees. One of our best memories from Chiclayo is coming back after a hot, dusty day out in the city and cooling down  in that giant pool. What a treat! Also thank you to the wonderful staff. As during our other stays at Casa Andina, everyone was quite helpful and professional. 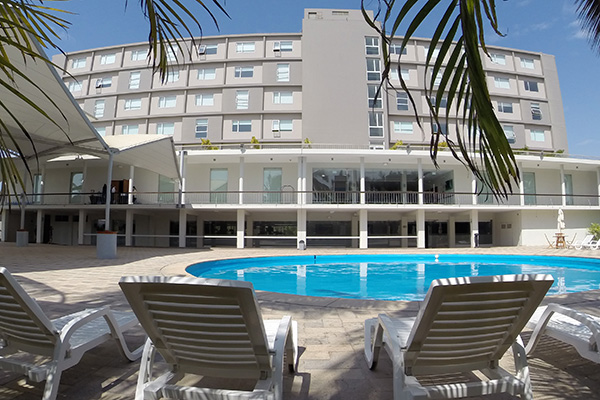 Disclosure: While staying in Chiclayo, we were guests of Casa Andina. However, all of the opinions expressed here are our own.

6 responses to “The Tombs and Treasures of Chiclayo”