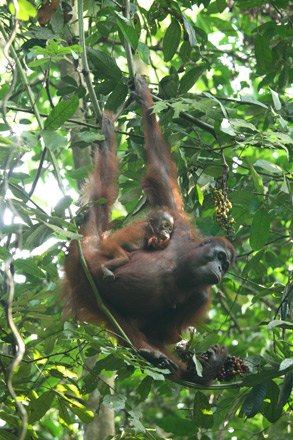 The moment I left the mountain gorillas in what was then called Zaire, I knew that Thomas and I would one day track wild orangutans in Borneo. (Great apes are the holy grail for us wildlife fanatics.) What might have seemed like a distant dream for many people was a very clear series of obstacles for me. Although I was only 24, I had already been to Borneo once and the difficulty and expense of viewing orangutans in the wild had prevented me from seeing them while I was there. As a starving student, I had contented myself with the Semenggoh orangutan rehabilitation center outside Kuching in the Malaysian state of Sarawak. It was a rewarding visit, but it only served to whet my appetite.

Fast forward two decades and here we are in Kutai National Park situated along the coast of the Indonesian state of East Kalimantan. Kutai National Park is the poster child for the crimes against nature taking place across Indonesia from Sumatra to West Papua. Illegal logging and poaching are rampant. Sitting inside Kutai’s Camp Kakap, you can hear the chain saws and smell the smoke from burning fields. A short distance away, a coal mining company has carved a massive crater into the earth. Kutai itself sits atop a valuable coal deposit which has that company drooling with desire. This is the reality of the 21st century orangutan, both in Borneo and in Sumatra, and it isn’t reassuring. 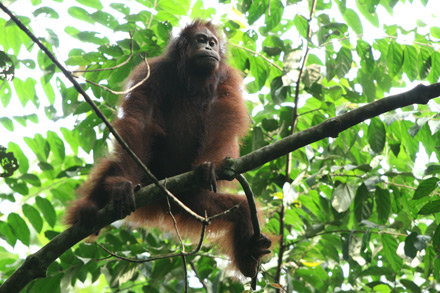 But mere feet from the camp, narrow trails lead into the growth. Almost immediately, hornbills, pig-tail macaques, monitor lizards, and the songs of distant gibbons reveal the density of wildlife surviving within the confines of the park boundaries. It’s magical and, almost immediately, we become immersed in a damaged but stunning piece of our planet’s ancient natural heritage. 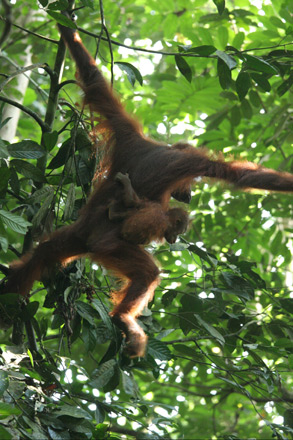 There are an estimated 600 orangutans in Kutai, and over 25 of those live within the trail system of Camp Kakap. This impressive density means that finding an orangutan is virtually guaranteed for those who stay a few days. While we were there, we encountered orangutans on five of six forays into the forest. (That sixth outing was a special side-trip into a remoter part of the park which was specifically done to view better preserved examples of the forest.) We spent hours observing orangutans, which allowed us to view natural behaviors such as sneaking honey from beehives, stripping bark off trees, building nests, and eating leaves and fruit.

But viewing orangutans is a vastly different experience than our mountain gorilla visit. Orangutans spend much of their time high in the canopy and views are often obscured by foliage. They are also solitary creatures meaning that you are usually tracking a single animal. Great patience and, more importantly, silence are required for a good orangutan viewing. Luckily, orangutans are quite curious, so they will often peek down at you or climb down closer to the ground. Most guides also know the locations of fruiting trees, which makes finding orangutans easier in specific seasons. 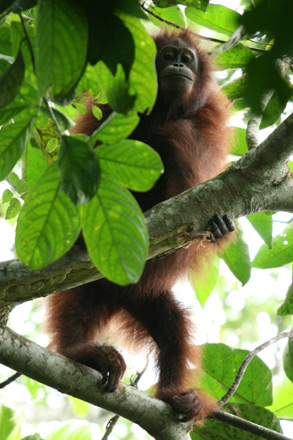 We had exceptional luck during our time at Kutai, or perhaps I should say we had exceptional skill. Our guide Udin was a master at locating the animals and his unique understanding and appreciation of the animals distinguished him greatly from the other guides. He legitimately enjoyed each outing and despite the fact that he had been tracking orangutans for years, he seemed truly excited each time we found one. Not all guides are created equal at Kutai and that can have a huge impact on a visitor’s experience.

Udin displayed an almost psychic understanding of the orangutans’ behavior. Thomas, Becky and I spent almost an hour and a half observing an old 45-year-old female as she worked her way from tree to tree feasting on bark. As we sat staring up into the trees, Udin hacked a small path heading further into the jungle. I found myself wondering why he assumed the orangutan would head in that particular direction, but sure enough by the time she did, Udin had already cleared the way for us to follow. 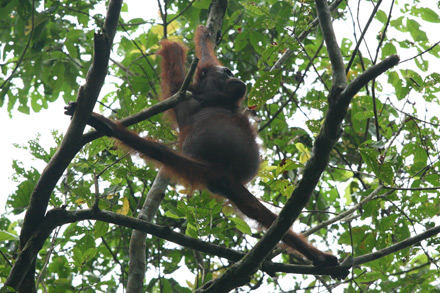 Our orangutan experience FAR surpassed our expectations. Interestingly, most visitors seem preoccupied with getting as close to the animals as possible. While we had several amazing close encounters with them, they seemed most magical high up in the canopy. As often as I had seen orangutans in zoo enclosures, I had never really seen how they move through trees. At moments, their aerial acrobatics defy logic. On several occasions, I watched as adult orangutans moved between trees suspended by nothing other than twig-thin branches that in no way seemed strong enough to support their weight. At moments, Thomas, Becky or I would burst out in laughter at the sheer boldness of certain moves.

Beyond the acrobatics, the overwhelming sense of humanness makes orangutans particularly fascinating. Their facial expressions and body language are extremely recognizable and personalities are easy to distinguish. At moments, I felt like I was spending time with a prehistoric tribe rather than viewing wildlife. Our stay in Kutai was filled with meaningful moments. 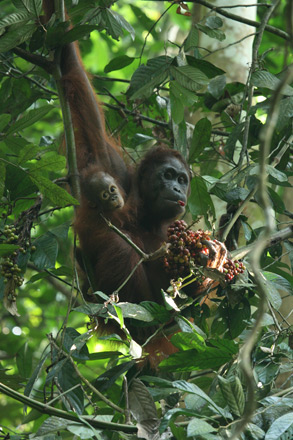 On one particularly memorable occasion, we happened upon friends Sarah and Pete along with their guide watching a mother orangutan with her baby. The mother swung down into a tangle of vines surrounded by ridiculously picture-perfect bunches of wild jungle grapes. The two sat munching on the precious fruit for more than twenty minutes. It was a National Geographic moment if I’ve ever seen one – and one of the most memorable wildlife moments of my life. Pure magic. 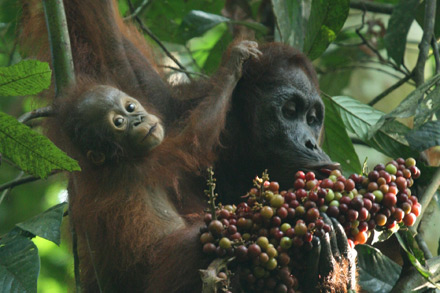 Most people still content themselves with experiencing orangutans at rehabilitation centers such as Semenggoh or Sepilok in Malaysia. Those who do insist on viewing orangutans in the wild usually end up at Tanjung Puting in Kalimantan, Bukit Lawang in Sumatra, or along the Kinabatangan River in Sabah, but these sites may leave some keen naturalists feeling somewhat disappointed.

Many orangutans have been relocated or rehabilitated into Tanjung Puting and Bukit Lawang, so you aren’t really sure if you are seeing a wild orangutan or a rehabilitated orangutan. Both sites also attract quite a few tourists meaning orangutan behavior can be somewhat “unnatural.” (Google “Bukit Lawang + Mina” and start reading for more on that comment.)

After exhaustive research on the more remote sites around Kalimantan, I decided on Kutai located just outside Sangatta in East Kalimantan. While most of the world would consider Kutai remote, it is considered one of the more easily visited wild orangutan sites in Kalimantan. (I should point out here that “easily visited” in Kalimantan takes on a whole new meaning.)

While much of Kutai is secondary forest, wildlife viewing within the park is excellent. The impressive number of orangutans within the park mean most visitors should view one while there. In addition, we saw numerous hornbills, monitor lizards, pig-tail and long-tail macaques as well as gibbons. (If you want to see gibbons, you’ll need to get up early and go tracking with a very good guide.) There are no proboscis monkeys near Camp Kakap; however, you can view them as well as crocodiles on a trip downriver to the mangroves, which can be organized out of Camp Kakap. Serious birders will probably prefer river-based viewing along the Kinabatangan River in Sabah.

One word of warning, the staffs of both the Kutai National Park office in Sangatta and Bontang are shockingly disorganized. Requirements to enter the park appear to change on a daily basis. While we were there, some visitors had been required to get permits, others were told that permits no longer existed, and yet others had just shown up at the dock in Kabo and rented a boat to Camp Kakap on their own bypassing the national park bureaucracy.

Accommodation in the park is booked through the mysterious Mr. Supiani who appears to control accommodation, food and guides once within the park. It is not clear who he is and why he organizes all the bookings rather than staff at the park offices.

Some people book tours out of Balikpapan or Samarinda. Expensive tours provide better food, charter transport, and help you cut through park bureaucracy, but once you are in the park, you will sleep in the same accommodation and use the same park guides. For this reason, most budget travelers will prefer to travel to Kutai independently.

Before planning your orangutan adventure, check out the excellent orangutan thread on the LonelyPlanet.com Thorn Tree Forum for the latest info on Kutai as well as other orangutan sites in both Borneo and Sumatra. Also, check out our video of the orangutans of Kutai National Park.

7 responses to “The Orangutan Experience”