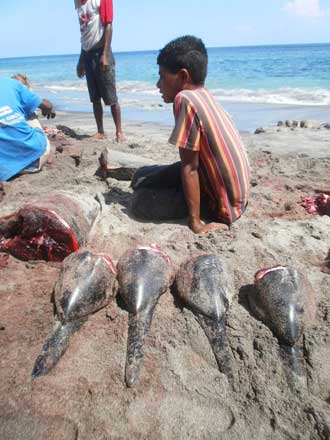 Dolphin heads on the beach

When do indigenous hunting rights become a danger to the environment? Do we want whale hunting to become a tourist attraction? Should we eat in a restaurant that primarily serves dolphin meat? So many questions.

As we, along with our friends Elma and Marnix, approached the remote island of Lembata, Thomas and I were highly undecided about whether we wanted to visit Lamalera, the controversial whale hunting village on the south coast of the island.

Visitors to our site know we are very interested in the indigenous peoples of the world. But we are also dedicated wildlife lovers as well as avid divers. Lembata is really the first place where these interests have collided in such a dramatic way.

As we sat in Lembata’s tiny capital Lewoleba, I was still torn between whether to visit the village or move on and make an ethical statement by skipping it. At moments, bypassing the village seemed silly. At other moments, it felt necessary. I simply couldn’t decide. 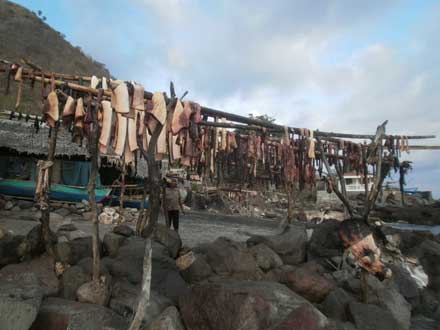 When we suddenly discovered that, due to the ferry schedule, visiting Lamalera would mean being trapped on Lemabata for eight days, I seemed to have a complete decision-making meltdown. I reflected on video footage of Lamalera hunters beating a dolphin to death (see below) and on an article I had read showing the tribe slicing up a whale shark. Sources suggest Lamalera hunters kill around 25 whales per year as well as hundreds of dolphins, whale sharks, mantas and other pelagics. Some even suggest aggressive hunting by the whale hunters might be having an impact on the population of whale sharks off of Australia’s stunning Ningaloo Reef.

From firsthand experience, we both understood that small-scale indigenous hunting can have a significant impact on the environment. Although Lembata is remote, interest in the whale hunters has caused the Indonesian government to start promoting the Lamalera hunters as a sort of cultural “tourist attraction”. I had read numerous articles on the subject, and in the end, I strongly felt visiting the village was both important and stupid. Hmmm. 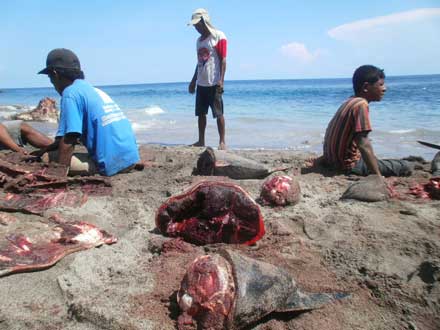 Butchering dolphins on the beach

So there we stood with Elma and Marnix waiting to board the truck to make the rugged journey across the island to isolated Lamalera and I suddenly asked myself, do I want to spend a week in a place where everyone is chopping up the animals I love most. For me, the answer was no. Thomas agreed. Suddenly, we stepped back and waved goodbye to our friends, whom we had been traveling with for the last three weeks. Such a strangely abrupt goodbye. In one spontaneous decision, all plans had changed.

Later that day, we met Katrin, a French traveler who had just returned from Lamalera and was boarding our overnight ferry to Alor. (Katrin provided the pictures for this post.) She told a story of slaughtered whales, drying meat, partying villagers, decapitated dolphins, the overwhelming stench of whale flesh, and surviving on a diet of rice and dolphin. It sounded fascinating and horrible at the same time. Somehow, I both envied her and felt a serious sense of relief at not having visited. Perhaps, that dual reaction best encapsulates the complex story of Lamalera. Even after having visited, Katrin seemed to speak in that same dual reaction of fascination and disgust. Perhaps, there is no clear answer to the debate over traditional hunting in Lamalera. 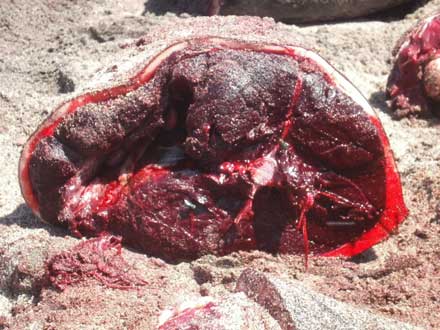 A piece of dolphin meat on the beach

While traditional hunting practices might me debatable, I would suggest that Lamalera whale hunting should not become a tourist attraction and visitors should not encourage hunting by paying for outings. I would also hope that guidebooks would be rewritten to actively discourage whale-hunting tourism. Even while researching a visit to Lamalera, I discovered several blog posts from travelers who had payed to join whale hunting trips and then afterwards urged others not to do the same. I also discovered an interesting video which I am including below:

So in the end, this is one place we did not visit and one experience we chose not to have. We would love to hear your thoughts on the complex topic of indigenous hunting practices and tourism in the comment section below as well as any personal descriptions of a visit to Lamalera.

12 responses to “The Lamalera Whale Hunters”