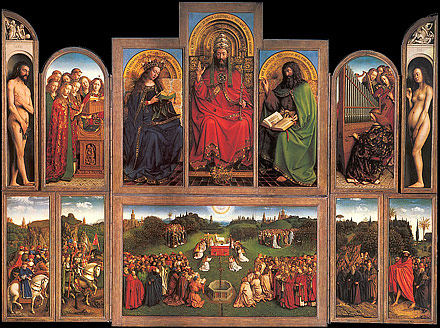 The Ghent Altarpiece, also known as the Adoration of the Mystic Lamb or the Polyptych of Ghent, just might be my favorite single piece of art in the world. Considering my travel history and the fact that I have always had a distinct preference for everything African and Asian, that’s a pretty strong statement. But this breathtaking painting and its history, which might have made a far superior fourth Indiana Jones movie, have certainly “converted” more people than me. Plus, this painting and I have a special connection.

It’s impossible to appreciate from the picture above – or any picture for that matter – but the painting is spectacularly three-dimensional with deep, rich colors which appear to have defied history. (I’m assuming amazing restoration is at least partially responsible for that last point.)

Painted by Hubert and Jan van Eyck over a decade and completed in 1432, the painting is so exceptional and such a departure from what came before it that it marks a significant turning point in Northern Renaissance art. It is most certainly “the painting” in Belgium. 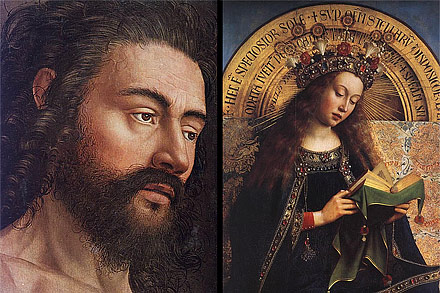 While many legendary pieces of art, such as the Mona Lisa, might leave some visitors a bit underwhelmed, the Ghent Altarpiece should surpass any art history buff’s expectations. Measuring an incredible 3.5 by 4.6 meters (11 by 15 feet), the painting is simply awesome. I’m not sure I’ve ever seen people standing with an audio tour staring at a single piece of art for 45 minutes anywhere else. (Perhaps, in large architectural paintings like the ceiling of the Sistine Chapel, but never with an individual work of art like this.) And if the art itself doesn’t keep your attention, its history will.

The Ghent Altarpiece is thought to have been originally made with an elaborately carved outer frame which possibly included clockwork mechanisms designed to move the shutters and perhaps even play music. The frame was destroyed by iconoclasts during the Reformation (Ugh!!!) because they apparently had nothing better to do. But the idiocy didn’t stop there.

Six of the panels were pawned off to a Brit in 1815 by the Diocese of Ghent. From there, the panels were purchased by the King of Prussia and they eventually ended up in the Gemäldegalerie in Berlin. After World War I, the pieces were returned to Belgium but the Germans WERE PISSED. Knowing this, when World War II broke out, the Belgians decided to hide the painting in the Vatican. En route, the Italians joined the Axis Powers, so the altarpiece ended up in Pau, France. 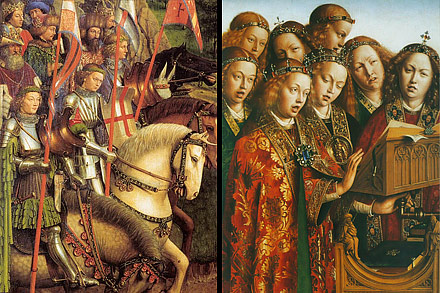 The Nazis were determined to bring the painting back to Germany and under the Vichy government, Hitler seized the painting and brought it to a castle in Bavaria. Worried that the castle might be bombed, the altarpiece was hidden in the Altaussee salt mines where it was discovered by the Americans after the war and returned to Belgium. Only one panel, stolen in 1934, remains missing; a replacement was painted by Jef Vanderveken in 1945. I generally don’t believe in miracles, but I might have to make an exception for the survival of this remarkable work of art.

I should add one additional rather comical memory. I first encountered the Ghent Altarpiece on a junior high school tour to Belgium and France. It was then known as the Triptych of Ghent (apparently it has now been promoted to a polyptych.) The Ghent Altarpiece was quite unprotected and openly displayed in the Joost Vijdt Chapel. I remember a student reaching out and moving one of the shutters and a teacher calmly saying, please don’t touch the altarpiece. Yikes!!! Can you imagine surviving the Nazis only to succumb to grubby little chocolate-covered fingers. Oh, and that student was me.

Within a year of those grubby fingers, the painting was relocated to a more secure chapel  in Saint Bavo Cathedral and is now housed in a protective glass enclosure. It costs 4 Euros to enter the chapel and view the painting, and it’s worth every cent. You can also view the painting online at the Getty’s fantastic website devoted to this amazing work of art. If you want, you can even zoom in real close and touch your computer screen. 🙂

3 responses to “The Ghent Altarpiece”