The Battle for Neil Island

Getting off Havelock island has been a nightmare. What we assumed would be a simple matter of walking up to a ticket office and buying a ticket has turned into the ultimate example of Indian incompetence, corruption and racism. 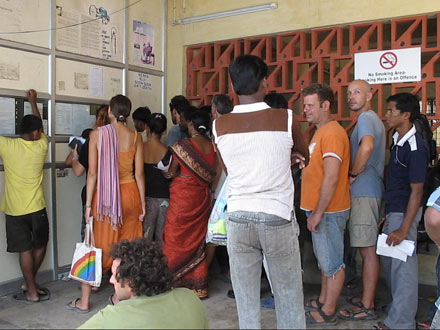 Thomas shows up at the ticket counter an hour before it closes. A line of foreigners wait impatiently as the ticket salesmen sip chai, chat, and avoid their work responsibilities. Any attempt to get them to do their jobs results in rolling eyes and Bengali curses. When one randomly approaches the window and deigns to actually sell a ticket, Indians rush up and cut in line. Thomas loses it and yells at the salesmen, so they pull back and sip more chai. An hour later as Thomas finally reaches the window, they slam it shut and announce the ticket booth is closed.

The line has grown, the same foreigners are back to purchase tickets, the lazy ticket sales people sit in the office sipping chai and chatting about everything but their work. Indians force foreigners out of the way and push up to the front of the line. An hour passes. Indians appear through a back door, large wads of money exchange hands. Are they buying up tickets? Yet another Indian cuts into the line, and I lose it.

An English woman lets him step in front of her.

“Every time you let another person in front of you, you let them in front of me,” I yell, enraged.

“It’s their country,” she says stupidly.

“Yeah, well there are 1.3 billion of them and I don’t have time for you to let every single one of them in front of you.”

She’s outraged at my impertinence. I announce that if she is going to let the whole world cut in line, then I’m next. I step in front of her. She bursts into tears. The girl next to her bursts into tears. Bizarre, pointless, whiny tears – in stereo!

I stand there for a moment struck by the oddness of the two crying women. I wonder to myself how they could possible be surviving in India if my stepping in front of them has caused such an emotional breakdown. I’m not saying a thing.

“Stop, just stop,” a foreign man races forward way too late and thrusts his hand towards me in a stop gesture. But I’m silent, I’m not saying a thing. “Just stop!” he yells again quite strangely. I start laughing because the whole thing reminds me of the plane scene in the Ben Stiller movie “Anger Management”. Despite the fact that Indians have been cutting in line the whole time, a New Zealander screams from the back that I am the reason that the whole world hates Americans.

And then something strange happens. (Or should I say stranger?)

A policeman shows up and yells at me. Not for being aggressive, but rather for standing in the women’s line. What women’s line? Good question. Apparently, I am standing slightly to the left of everyone else, which is interpreted as my standing in the women’s line. Outraged at my transgression, the police officer pushes me right up front to the ticket counter, effectively forcing me to cut in front of everybody who is angry at me for yelling about people cutting in line. Isn’t it ironic? (Didn’t Alanis have this scenario in her song?)

Anyway, arriving at the window, I ask to buy a ticket to Neil Island for that afternoon.

“No same day tickets to Neil Island,” the man screams and spits chai at me. “Only advanced tickets.”

“Give me any ticket to get off this god damn island,” I spit back at him. “Anything.”

Not at all annoyed by my response, he prints out two tickets for the following Sunday. Victory. The whole line of foreigners hates me, but as you’ll discover, one small victory on day 2 is a huge leap on day 5.

Bizarrely, the other foreigners in line are convinced to return later that afternoon to buy tickets only to discover there are none.

Thomas and I snorkel and sunbathe as the other foreigners, adopting our strategy, return to the line to battle it out for advance purchase tickets. Surprise, the oh so efficient staff informs them that, contrary to the previous day’s policy, only same-day tickets are sold, no advance-purchase tickets. (God, don’t you love this country?) Mysteriously, Indians appear to be buying something not available to the foreigners.

Thomas and I show up for the ferry to Neil Island anticipating problems. The same foreigners are accumulating in line, theorizing, conspiring, and eventually, screaming their lungs out. Dare I admit that I, the much maligned, enjoy the scene just a bit too much.

Eventually, the ferry shows up and crowds of Indians and foreigners rush to the port gate. The screaming masses look rather like the crowd of torch and sickle wielding peasants who stormed the castle in Frankenstein. Thomas and I approach the gates. Armed guards are attempting to hold the crowd back.

A girl screams, “I need to get on that boat. I have a flight tomorrow.” A man in the back yells, “Why won’t you sell us tickets?” The guards looks bored with what appears to be a daily scene.

I notice a few Indians pushing their way up to the gate and being allowed to pass through. Thomas and I force our way, backpacks and all, through the crowd. The guard warns us to get back. I stick our tickets in his face and yell at the top of my lungs, “We have advance purchase tickets!!!” He looks confused, but allows us through. Enraged Indians scream, “They’re foreigners, they’re foreigners. They can’t go through!!!”

What the hell is going on here?

We move on as confused security scrutinize our passports and Andaman permits looking for an excuse to arrest us. I can still hear one man screaming about foreigners being let through. I look back and notice that there must be at least twenty foreigners at the gate, their faces pressed up against the bars watching us. Some are screaming, some silently watching the boat.

We navigate the bureaucratic maze and move forward to board. Sudden yelling draws our attention to the fact that the foreigners have broken through the port gates and are storming their way on to the pier. It’s like a not so glitzy Indian version of Les Miserables. Police rush out from nowhere to corral the crowd and push them back out.

We are the ONLY foreigners who manage to get on the boat – and it only took 5 days!

We push our way through the overcrowded deck into the reserved seating! (Don’t think we had to have reserved seats, the office made us buy the higher priced tickets.) Sitting in our costly seats are two very relaxed Indian women. I inform them that they are sitting in our seats.

“In India, seat numbers not important,” she snaps, “This is India!!!”

A boat worker is walking past at that very moment. “Sir,” I say, “These women are sitting in our reserved seats. We booked these days…”

I pause as my rage looks for a new outlet. I look at the boat worker and say, “OK, if it’s not your job, it’s mine.” I stare the girls in the face, “Get the hell out of our seats. NOW!!!” I look like I’m going to kill them.

There is a huge debate in Bengali between the girls and the surrounding passengers. I smell blood. “Get up,” I yell again, “and get the hell out of here.” I yell it two more times. Eventually, the girls leave. The crowd stares at me like I’m the devil.

But then again, this American (and German) are the only two foreigners on the boat. And not only that, we are actually sitting in the reserved seats we payed for. Sometimes, it pays to be a bastard.

Somewhere on the other side of the hall, I hear an Indian woman screaming, “These are my seats. I booked them. You must leave.” She smiles across the crowded room to me in solidarity.

9 responses to “The Battle for Neil Island”