The Abui Tribe in Takpala 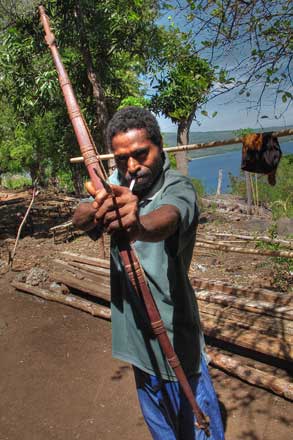 Fine, I take back what I said about Philip Morris. Geez, smokers can get so edgy!

No seriously, Martinus and I were just joking around in this picture, please don’t think the Abui tribe greets visitors with arrows to their faces. Quite to the contrary, they are some of the friendliest people we’ve met in Indonesia.

As you might have gathered, Katrin and I decided to take in a little of Alor’s amazing tribal culture by visiting Takpala, a traditional village on the volcanic slopes of the island’s northern coast. As you can see by the picture, we had a blast.

Renting motorbikes for the day, we drove out along the island’s coastal road past a series of small villages and black stone beaches. As Google Maps hasn’t quite made it to this part of the world yet, it took us a while to locate the access road to the village, which might be more accurately described as a steep path cobbled with very loose, uncooperative volcanic rock. (Not an easy ride.)

Stunningly situated in the mountains high above the coast, Takpala is inhabited by the Abui people, the first Papuan ethnic group we have encountered in Indonesia. (Not so coincidentally Abui means “mountain” in the Abui language.) The tribes here in Alor are noticeably different from those in Lombok, Sumbawa and Flores. Not only do the people have distinctly Papuan features, their small villages feature an elevated pyramidal hut design unlike anything else we have seen in the country. Moreover, the tribe still actively hunts with bows and arrows, a tradition they are very keen to show off to visitors. In fact, they had their bows and arrows out about two minutes after we arrived. 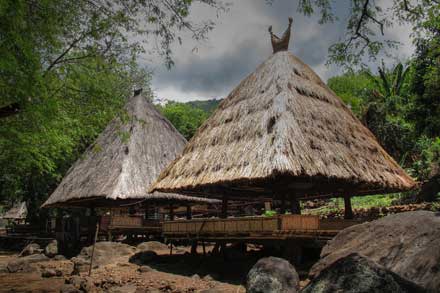 The people in Takpala were incredibly hospitable. We had come to the village with the intention of just getting a glimpse of their daily life. But instead, we ended up spending several hours with them. Friendly Wilmer took time out of his not-so-busy day to explain the difference between his bird arrows and the longer boar arrows. (Clearly I’m a different kind of hunter-gatherer who needed a bit of instruction.) While he was demonstrating his hunting skills, the little baby in the picture below started chewing on the sharp iron arrowhead of one of his bird arrows. Watching a baby with an arrow in its mouth would make any Westerner a bit jumpy, but apparently that’s just a normal toy for an Abui child. 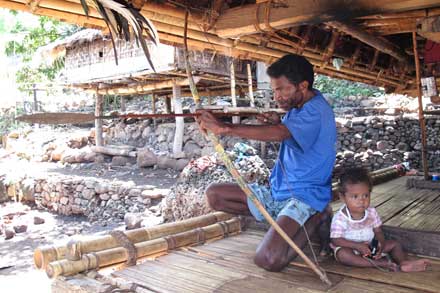 I asked if I could enter one of the pyramidal huts, so Wilmer happily led me up one of the ladders through the trap door into the very dark, smoky interior. Thatched walls, baskets of maize, bamboo ladles, and a clay cooking slab revealed that the Abui were living a much simpler life than I had initially guessed. Wilmer climbed a level up into the storage area in the tip of the pyramid and proudly brought out three prized moko, the mysterious drum-like objects that the tribes of Alor use as dowries. 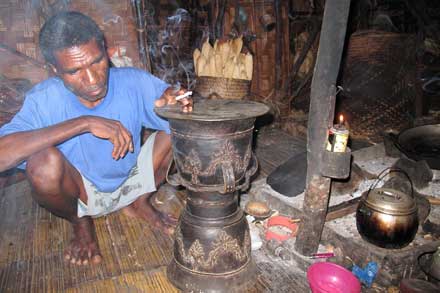 Nobody really knows how the moko came to Alor. The Abui say that they are gifts from the gods which they find buried in the earth. Historians believe that they were produced by the Vietnamese Dongson culture which had trade links with the Indo-Malay archipelago over 2000 years ago. It’s also believed that later Moko, produced by Javans and Chinese, were brought by traders to Alor in the 19th century. (So clearly not all moko are created equal.) 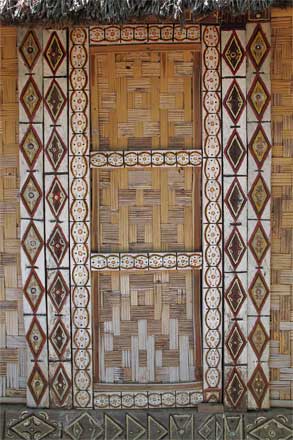 As with all the tribes in eastern Indonesia, the Abui call themselves Christian but appear to be more influenced by animist traditions than the Bible. I asked Wilmer why he thought the gods (notice the plural) had put elephants on one of his moko when there were no elephants on Alor. He told me that they were gods, so they could put any animal they wanted on the moko. (Fair enough.) 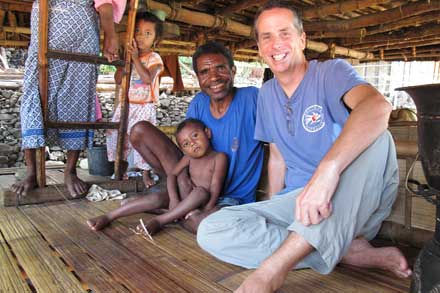 Pak Kris, the owner of our guest house in Kalabahi, had insisted that we visit his friend Mama Amalia while we were in Takpala. Wilmer took us over to Mama Amalia’s hut and she was gracious enough to invite us to a lunch of fried fish, taro, maize and greens. During the lunch we were joined by a German visitor who was working with a local orphanage. We discovered that the baby that had been chewing on the arrowhead had been abandoned by its mother. Takpala villagers had been caring for the baby hoping that the desperate mother would return, but after three months of waiting they were discussing the idea of finally sending the baby to the orphanage. 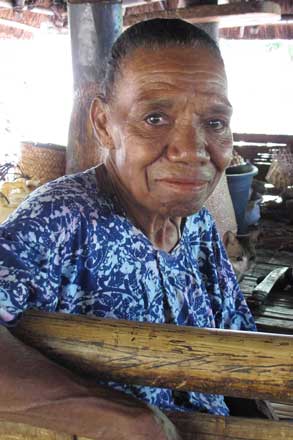 The Abui are obviously quite poor and living conditions are hard. The baby had noticeable signs of malnutrition and watching them prepare the food, it was clear that supplies were scare. Understanding the situation, Katrin and I shared in the meal, but we ate very little because we didn’t want to take too much of their food. Mama Amalia noticed our reluctance to eat and like some archetypal grandmother figure, she continued to push dishes of fish towards us and insisted that we eat more.

Mama Amalia is quite an amazing woman. While researching the Abui, I discovered several references to Mama Amalia online. Not only is she very generous and hospitable, she has also helped contribute to the preservation of the Abui language as well as its oral history. To anyone interested in tribal culture, I highly suggest taking a look at this collection of Abui fables put together by Hong Kong Baptist University. Several of the fables, which have been translated into English and Indonesian, were collected from Mama Amalia as well as Martinus. Enjoy.

Our tip for adventurers: Traveling this far off the beaten path is not for everyone. If you do venture out into the more remote areas of Eastern Indonesia, we always recommend travel insurance. As the saying goes “better safe than sorry”.