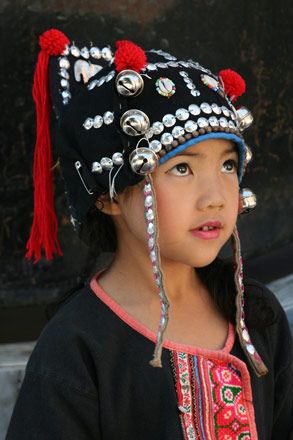 While visiting Wat Phra Tat Doi Suthep north of Chiang Mai, we discovered a relatively large number of very young Akha and Miao children who had been dressed up and strategically positioned around the monument to make some not-so-quick cash off Thais and foreigners alike.

Well-intentioned tourists will often snap some cute pictures of the kids and hand them some Baht without really asking themselves some basic questions: How long has this tiny child been forced to sit here? Has this child been pulled out of school to beg for money because the parents value quick cash over education? Why is the parent not sitting here dressed up in “traditional clothing” rather than the child? Am I indirectly contributing to the cultural marginalization of minority children by teaching them that begging is a sustainable lifestyle?

Yes, many minority groups around the world lack education and real opportunities for work, and as we mentioned in our Paduang post in Myanmar, sometimes the commercialization of “traditional culture” may be the only real survival strategy. But it’s worth taking a second to reflect a little on how these kids are being treated before rushing to snap some cute pictures.

The shot above was taken from a distance while a young Akha girl was trying to convince a tourist to cash up. We chose not to participate in this particular cash-for-photo scheme.