At last, after months of pyramid-hopping, we have made it to Mexico’s queen of pyramids, the Pyramid of the Sun. At 71.2 m, it is the highest pyramid in Mexico and completely dominates the archaeological site of Teotihuacan outside of Mexico City. It is absolutely massive!

As we approached the hulking structure with its monstrous base, we kept oohing and ahhing. Rather than immediately running up the 248 steps to the top, we headed straight for the smaller (yet giant) Pyramid of the Moon at the end of the Avenue of the Dead. From there, we had a great vantage point for taking photos and for taking in all the spectacular structures built by the Teotihuacan civilization. 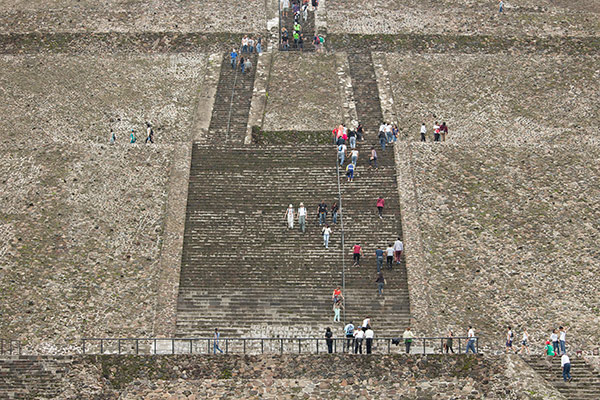 After checking out the Palace of Quetzalpapalotl (I know, it’s quite a tongue twister) with its surviving murals, we started our climb up the Pyramid of the Sun. During our first 100 steps we were happily chatting away, but as the site sits at an altitude of 2,300 m, this conversation was not going to get any deeper. Towards the top, we kept stopping ridiculously often… to take photos, of course. 😉 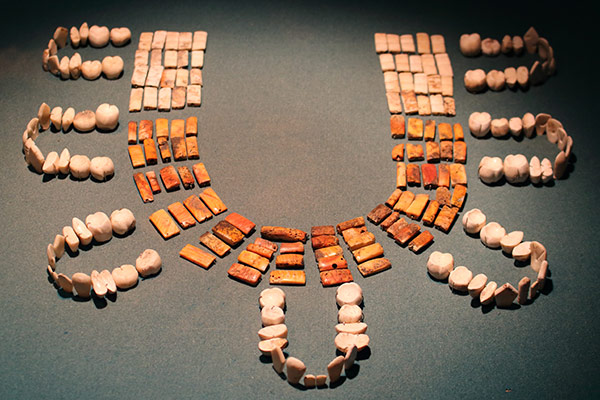 Needless to say, the 360 degree view made our burning legs and lungs all worth it. Although Teotihuacan has no jungle or wildlife to speak of, it is the sheer monumentality which makes the site so attractive. In the presence of total awesomeness, we plopped ourselves down, and let it all sink in. Eventually, a rain storm forced us down the pyramid and into a small but interesting museum, which kept us occupied long enough for the storm to pass. 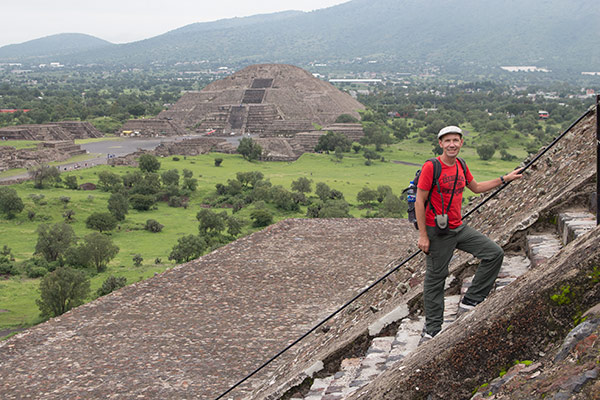 It’s worth noting that Teotihuacan is quite an extensive site. While most visitors zoom in by car, climb the pyramids and zoom out again, it really is worth taking some time exploring (we spent almost 6 hours here and wanted more). There are tons of things to discover including additional murals in more distant western temples. And make sure you don’t miss the extraordinary Temple of Quetzalcoatl with its spectacular serpent heads and stylized masks. Stunning! 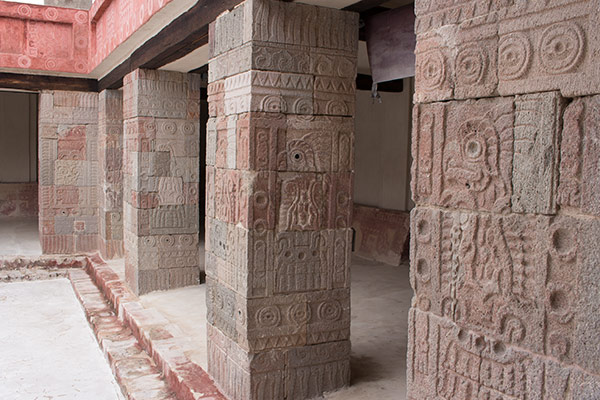 If you have wondered about the funky names given to Teotihuacan’s structures, most come from the Aztecs who took over the abandoned and ruined city in the 13th century. This includes the name Teotihuacan itself, which means “birthplace of the gods”. Due to the Aztec influence, Teotihuacan is now often referred to as Aztec ruins. 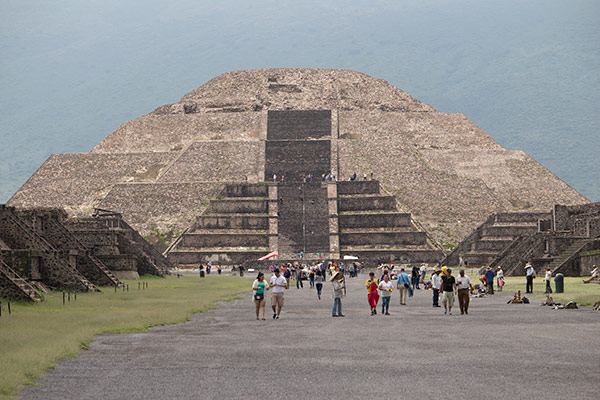 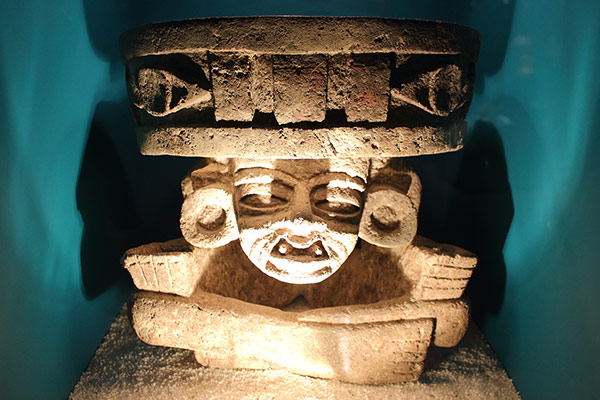 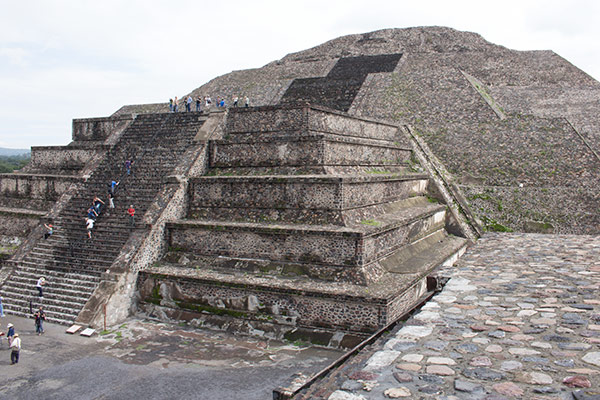 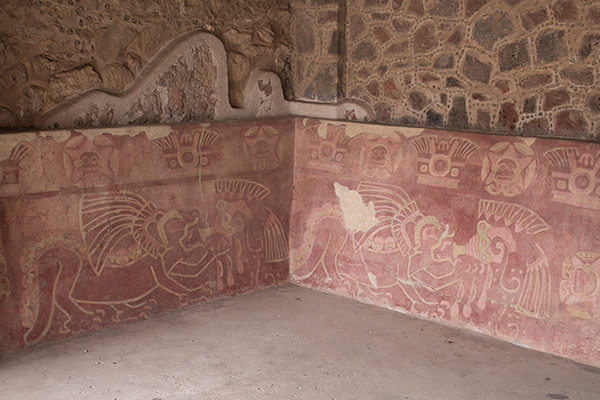 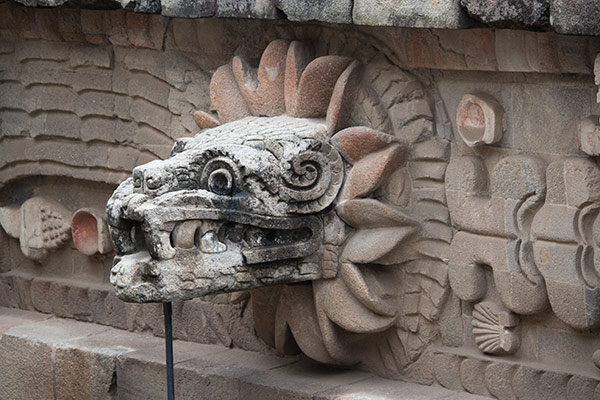 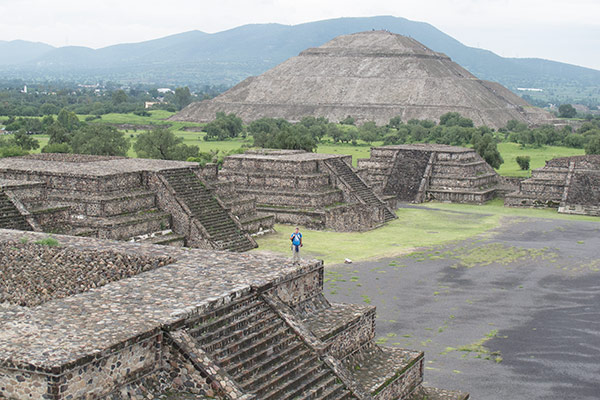