Ten Things We Loved about Merida 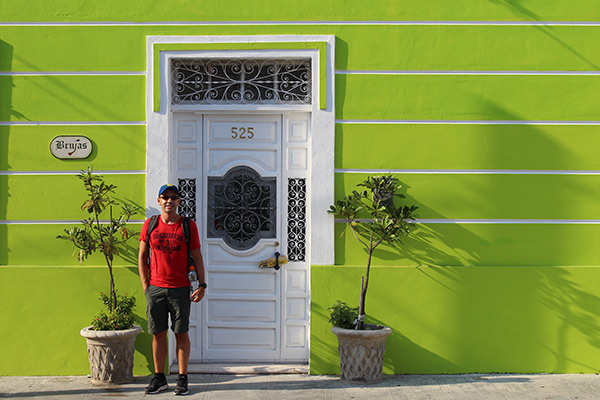 Who doesn’t love a city where you can get away with a lime-green house, right? Colorful Merida feels VERY far away from the Mayan Riviera. The city is far more mellow, and there’s a much healthier proportion of tourists to Mexicans. Merida is relaxed and authentic. Nobody jumps in your way offering you a tour to Chichen Itza despite the fact that Chichen Itza is only about 70 miles away. In fact, there are dozens of Mayan sites in the surrounding area and tons of potential day trips. But it’s not a city that immediately reveals itself. It would be easy to shoot through and remain totally unimpressed. Merida takes a bit of time to discover – and that was just fine for us. Here’s a bit of what we loved about the Yucatan’s low-key capital. Amazingly, everything we list here, except the food, is FREE. 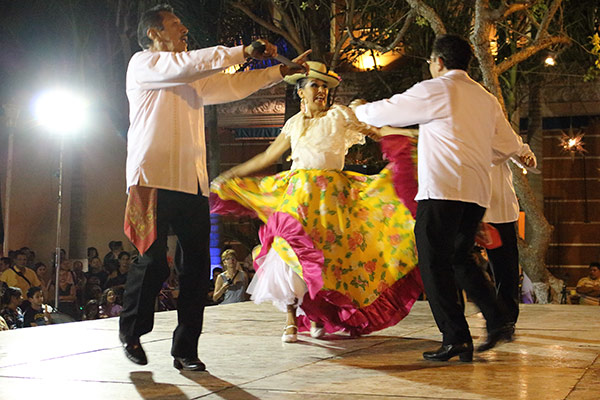 Every time we were out walking around Merida, there was some kind of free dance show going on: traditional Yucatecan dances, ballet, streets filled with couples dancing to swing tunes… you name it, they’re dancing it. We even stumbled across what appeared to be a free, open-air performance of the Lion King. Check out the free Yucatan Today magazine to find out what is going on.

2. Walking though the Historic Streets 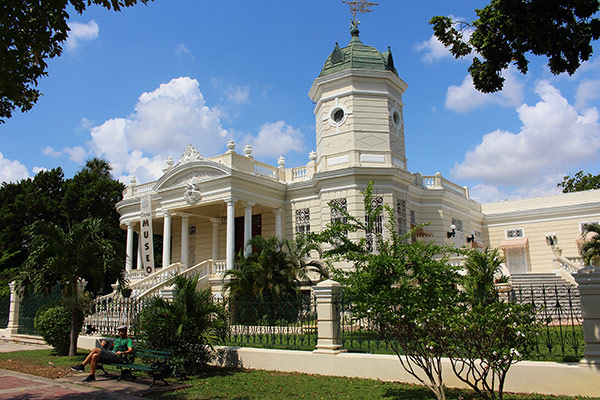 Merida is not immediately as obviously spectacular as other historical towns such as Valladolid or Campeche because much of its attractions are spread out throughout the city. Of course, the Plaza Grande and the surrounding streets are a major focus as is the Pasejo de Mentejo with its opulent mansions. But wandering around town we came upon a dozen or more beautiful squares with stone churches and lovely architecture. There’s a lot to discover. 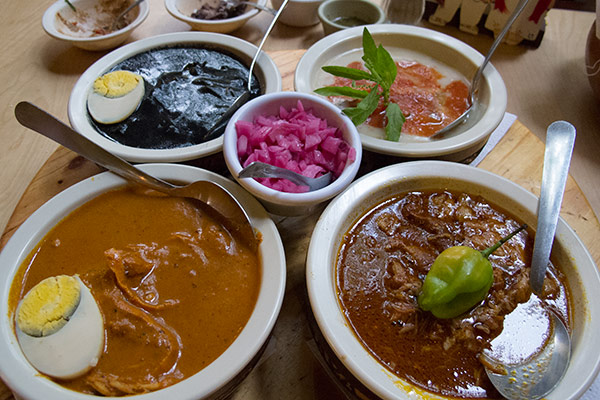 Being the capital, Merida is also the culinary center of the Yucatan. At La Chaya Maya Restaurant, we sampled some Yucatecan specialties: cochinita pibil (suckling pig flavored with achiote, garlic, and sour orange), pavo en relleno negro (turkey in a sauce made of charred chile, thus the black color), pavo en sac-col indio (baked turkey in a rich turkey gravy), pavo en pipián (turkey simmered in a delicioso pumpkin seed sauce). It’s definitely not the place to be a turkey. Vegetables, on the other hand, are quite safe in the Yucatan with the exception of pickled onions and chilis. 😉 Another typical dish of the region is sopa de lima, a refreshing, mouth-watering soup with shredded chicken, lime and strips of tortilla chips. 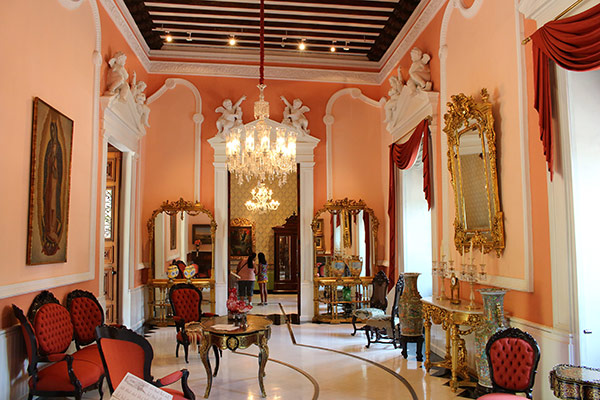 Built in 1549, the Casa de Montejo is a beautiful mansion which gives you an idea of how the upper UPPER class used to live in Merida back in the day. The interior looks like Marie Antoinette went on a shopping spree. Best of all, the Casa de Montejo is completely free. (Maybe they just hawk a Ming vase every now and then to keep it running.)

5. The Re-enactment of a Mayan Ball Game 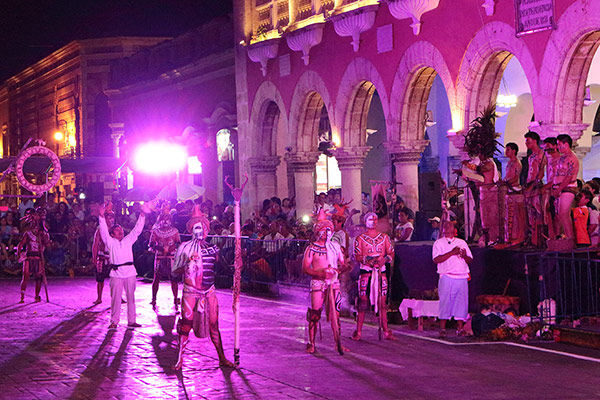 It’s not every day that you’re walking down the street and you stumble upon a re-enactment of a traditional Mayan ball game complete with players in loincloths, skeleton body paint, and dear-head headdresses. Clouds of incense and ritual drummers decked out in huge feathered headgear added to the atmosphere as the players knocked the ball around the court with their hips… that’s right, HIPS! How the hell are they supposed to get the ball through the hoop using their hips? 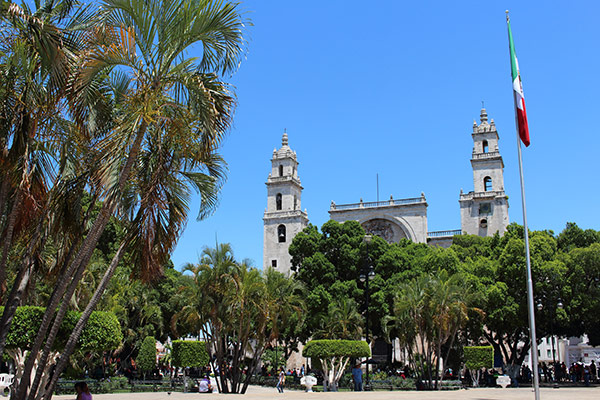 Many of Merida’s public squares, including the famous Plaza Grande, offer free WIFI and cell phone charging stations. Are you serious?! Who knew the Yucatan was so cutting edge? 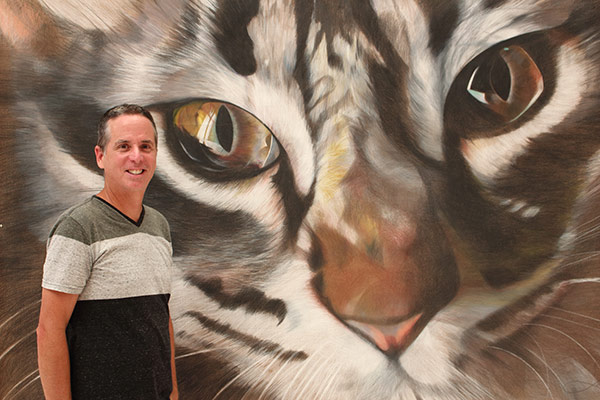 One of the biggest surprises for us was Merida’s funky little Museum of Contemporary Art. We loved the temporary exhibition of wall-sized cat paintings by José Luis Loría (funny and cool). We also enjoyed Natasha Gray’s works inspired by massive swirling flocks of birds. What’s more, the museum had a sizable temporary exhibit of Mirós and tons of works by local artists. Lots of great things to see.

8. The Weird and Wonderful “Monument to the Flag” 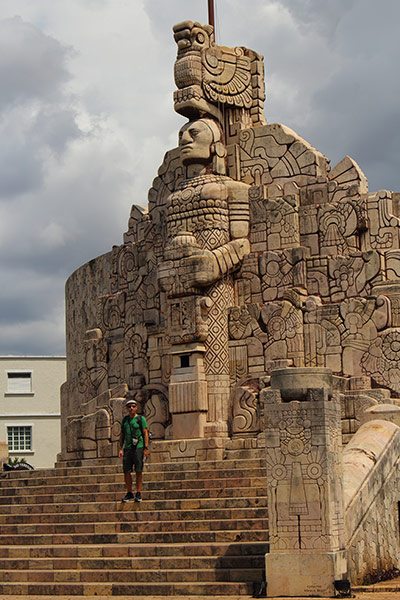 I don’t know what the artist was on when he designed this thing, but it is monumentally bizarre… in a totally cool way. (Do I see an elephant to the left of the main statue?!) Anyway, I couldn’t find any information about what it is supposed to represent (other than the name). If anyone knows, please leave a comment. 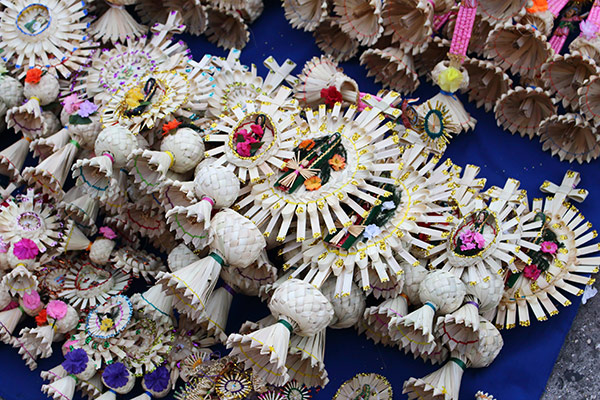 Merida has a much more authentic vibe than many of the other large towns in the Yucatan Peninsula. It’s a great place to wander around and discover Mexican and Yucatecan traditions. Tiny women sit around in their embroidered white huipiles. People still speak Yucatec Mayan. Easter brought a wave of woven offerings that lined the square in front of the cathedral. And just wait until you see our post on makech. 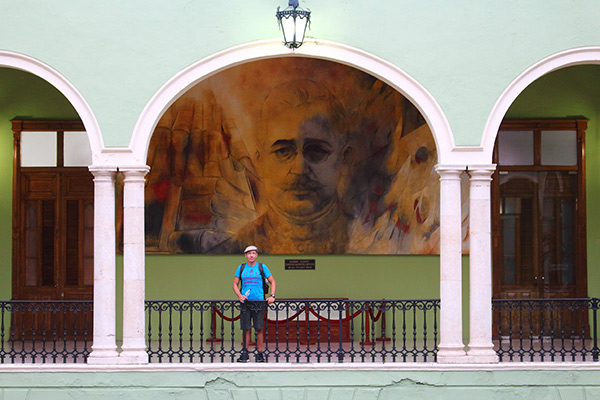 The Governor’s Palace is another great opportunity to witness Merida’s old-world opulence. Beyond its grand hall and courtyard, the palace is lined with strikingly dark and dramatic murals by Fernando Castro Pacheco depicting the clash between the Maya and Spaniards. Wow.

4 responses to “Ten Things We Loved about Merida”