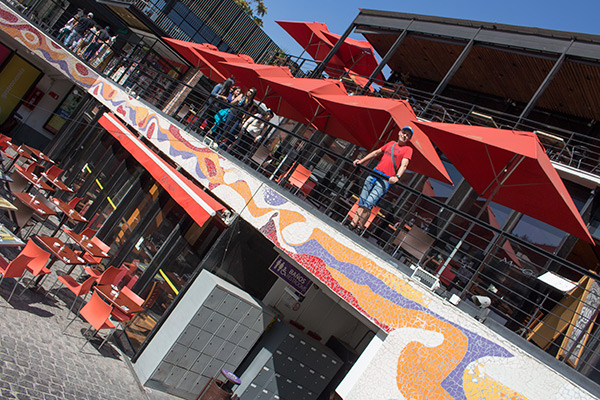 Santiago de Chile… quick, name one tourist attraction that comes to mind. Nothing? We had exactly the same response. Latin America’s fastest growing city is definitely not the first entry on most travelers’ bucket lists. We certainly didn’t have any expectations when we planned a 3-day stay in Santiago to wait for our flight to Easter Island. The giant metropolis of five million was just going to be another quick stop en route to a more exotic destination. But then something happened. We suddenly discovered we really liked the city.

It’s true, there are no world-famous monuments, no Eiffel Tower, no Pyramid of the Sun, no Taj Mahal, but there’s a subtle attraction to Santiago, a laid-back and easy-going vibe that spoke to us. In some ways, it reminded us of Los Angeles without the beaches; even the smog that cloaked the snow-covered Andes while we were there. We also had a rather peculiar mental connection to the city: Everyone always gets Santiago and Tony’s hometown of San Diego confused. When he tells people he’s from San Diego, they’re always surprised he’s Chilean. 😉 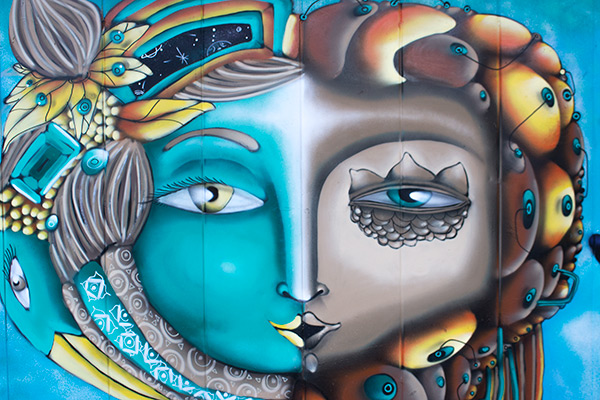 Although my initial impressions of Santiago prompted memories of L.A., I quickly realized that I felt a lot safer in this South American city. Local Santiaguinos are extremely friendly and helpful, so it’s not surprising that Santiago is considered one of the safest capitals in all of Latin America. It also feels distinctly western, looks a lot cleaner, and is much less chaotic than Lima or Buenos Aires. In short, Santiago seems to have eliminated the third-world nonsense without sacrificing it’s Latin American charm. 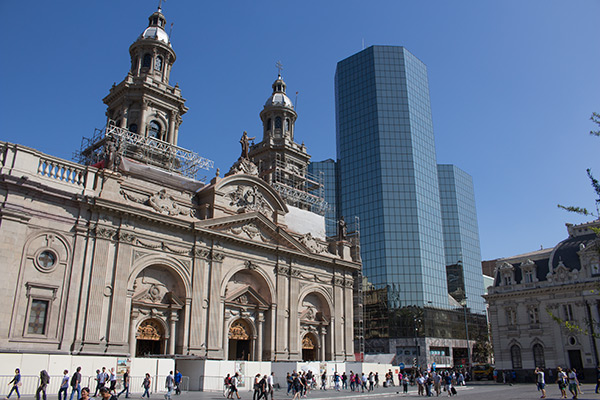 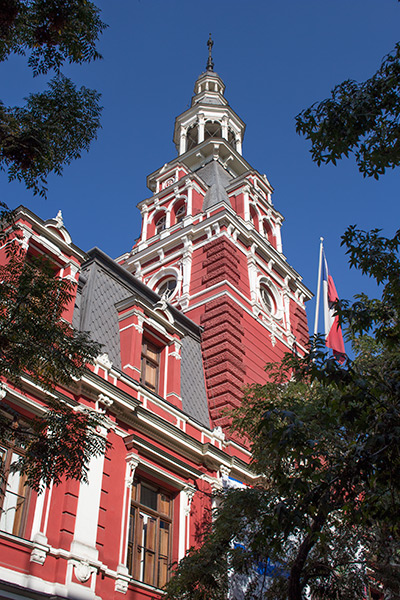 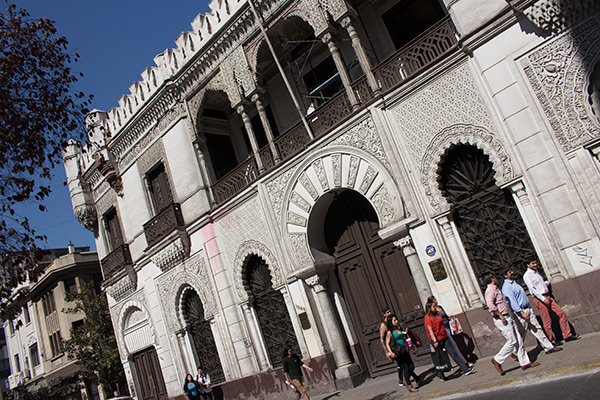 While in Santiago, we stayed at Hotel Ismael 312 in Barrio Lastarria, a trendy neighborhood from where we could easily explore the city center on foot. Strolling through the streets, we loved the interplay of the old and the new: a glass-covered highrise next to Santiago’s neoclassical cathedral on Plaza de Armas, modern office buildings next to colorful colonial mansions, Art Deco shopping arcades followed by a Moorish villa. The city’s attractions don’t immediately jump out at you – you have to seek them out. 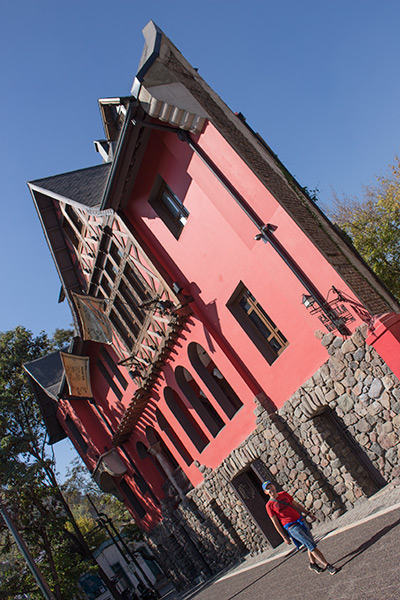 Yes, exploration reveals tons of fun discoveries. Pushing our way through the Mercado Central we eyed display after mouth-watering display of crabs, crayfish and other crustaceans. Under the arches of the market’s impressive iron roof, businessmen lunched on ceviche and grilled octopus. Shoppers bounced from stall to stall haggling over prawns, scallops and whatever ocean creature caught their fancy. National Geographic declared the Mercado Central one of the Top 10 Food Markets in the world. 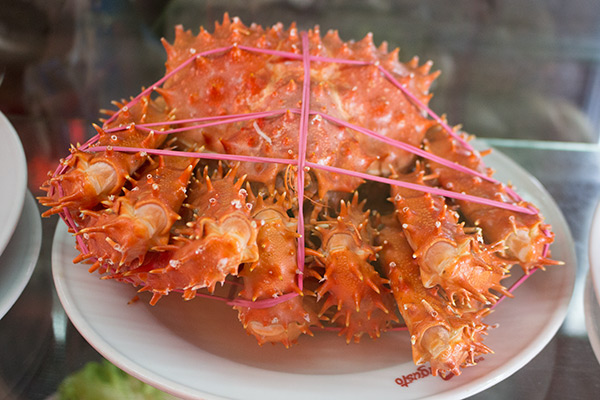 Despite the visuals, we do have to concede that Chilean food is a bit of a disappointment after our six months in Peru. Our friends at GlobetrotterGirls.com wrote a rather scathing review of Chilean cuisine, and we have to admit that we agree with a lot of it – especially if you are vegetarian. Outsiders who encounter their first completo, a hot dog topped with obscene amounts of mayonnaise, are likely to run screaming from the country. 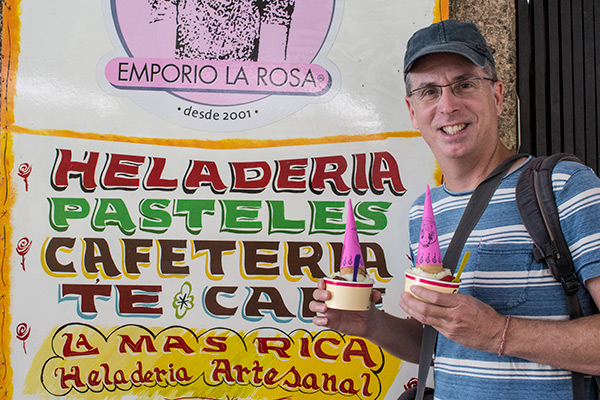 Having said that, Santiago offers the best culinary options in the country. It is very telling that one of the restaurants we heard mentioned over and over was the local branch of Astrid y Gastón, a legendary institution known for its Peruvian food. But never fear, you won’t go hungry in Santiago. There are plenty of great international restaurants and cafes to choose from, and we absolutely loved the artisanal ice cream parlor Emporio la Rosa in Barrio Lastarria. Make sure to sample the lemon-mint-basil and rose ice creams – yum! 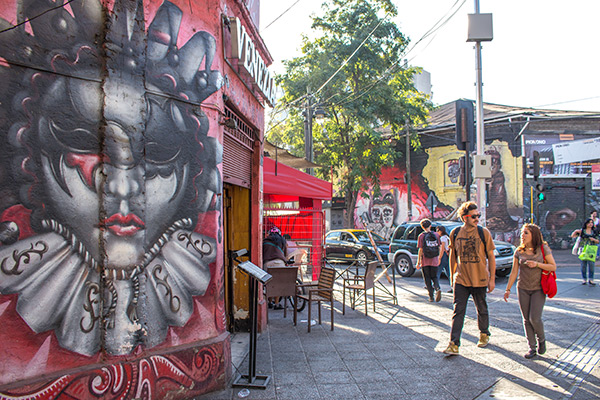 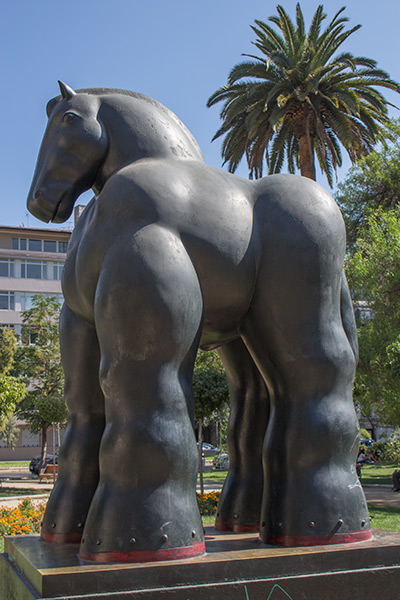 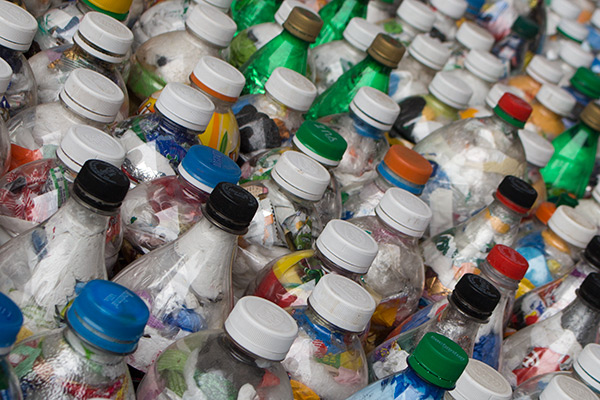 It’s not just the ice cream that comes with an artistic touch; as with other parts of Latin America, art is everywhere in Santiago. From giant full-story street paintings to the publicly displayed Caballo statue by world famous Colombian artist Fernando Botero, Santiago’s quirky art scene seems to embrace it all. What’s that? A postmodern visual commentary on a disposable world or just plastic bottles stuffed with trash? Wander through the streets or into the beautiful Museo Nacional de Bellas Artes and challenge your mind. Even a visit to the Universidad de Chile metro station reveals spectacular multi-story murals by artist Mario Toral. 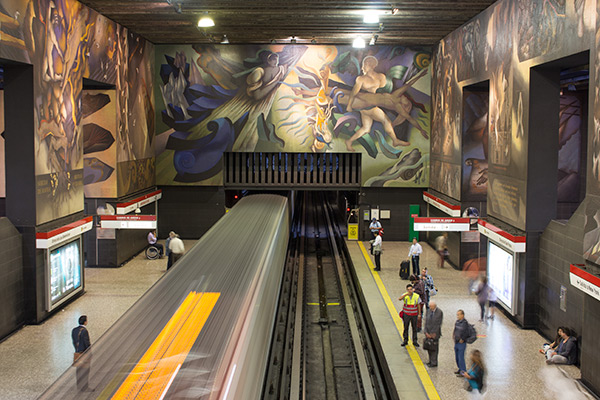 Inspired by the city’s fantastic street art, we spent a few hours wandering the neighborhoods of Bellavista and Centro in search of interesting graffiti and quirky sculpture. At the Patio Bellavista, we discovered an abstract work that looks like a massive bead necklace. Off the Plaza Brasil, we found an amazing graffiti puma tucked into the corner of a building. The surrounding streets feel like an outdoor gallery for street artists. 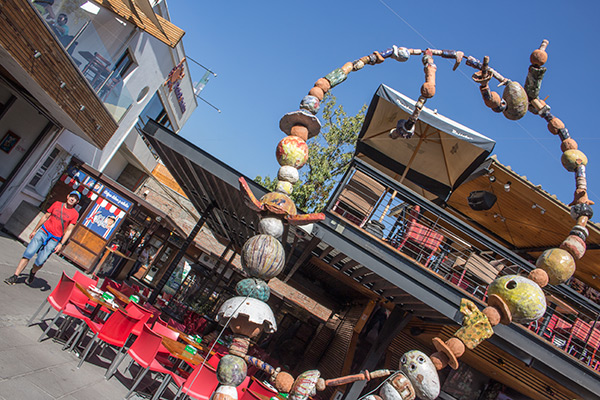 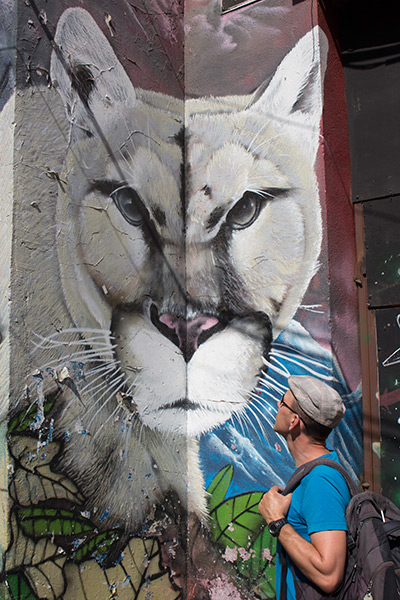 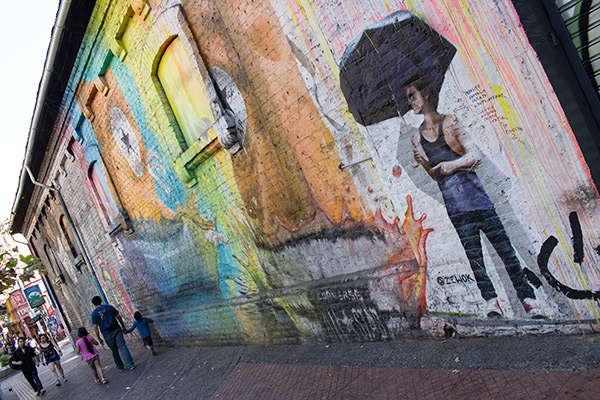 Should you happen to make it all the way out to Plaza Brasil, take a moment to hunt down the monkey puzzle tree in the center of the park. Declared the national tree of Chile, the bizarre species of pine with its thick, overlapping scaly leaves looks positively reptilian. (Yes, we can be a bit bio-nerdy, but if we hadn’t mentioned it, would you even know it was there?) 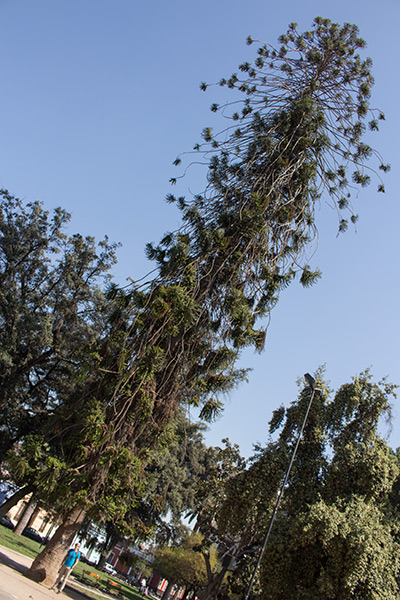 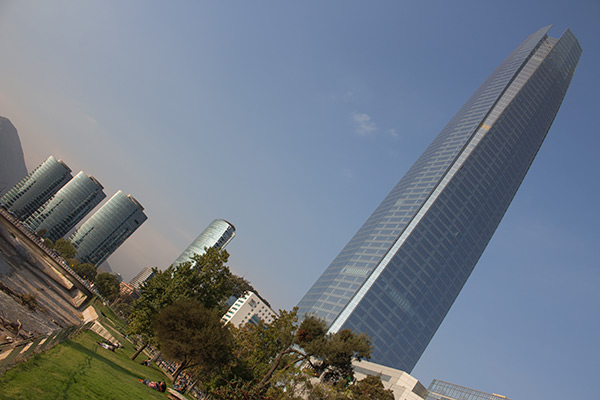 If hunting for street art or exotic flora is not your thing, head out to Providencia, home to Latin America’s highest skyscraper. The Gran Torre Santiago, a 300-meter highrise and Santiago’s claim to fame, stands as a proud symbol of up-and-coming Chile. As if to emphasize the city’s prosperity, the base of the towering skyscraper contains the Costanera Center, Latin America’s biggest mall. Although we are not huge shoppers, we are dedicated mall rats (and I feel that I need to celebrate Tony’s southern Californian roots), so we spent an afternoon hanging out in the food court, and then we took in a film. 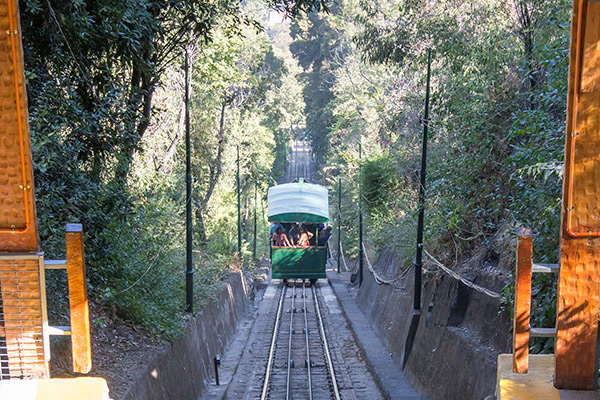 For outdoor enthusiasts, Santiago also boasts a huge selection of sprawling green spaces. The largest, and perhaps the most famous, is the Parque Metropolitano occupying San Cristóbal Hill. The ride up in the rickety old funicular past Santiago’s zoo is half the fun. A short walk from the end station takes visitors to the white Virgin of the Immaculate Conception, or as we called it, the holy cell tower. (Just check out the photo in this post, and you’ll see what I mean.) The sweeping views from the top reveal the scale of the Chilean capital, and if you are lucky enough to have smog-free skies, there are great views of the Andes in the distance. 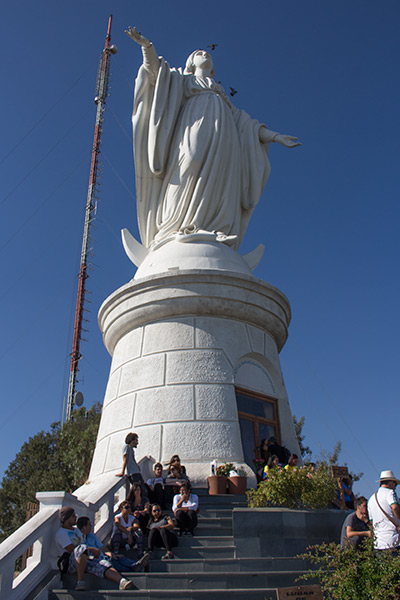 Yes, Santiago de Chile does lack those classic guidebook highlights. But what we discovered in our short visit before Easter Island is that the city is a remarkably livable South American capital with modern facilities and uniquely safe streets. Many long-term travelers crossing South America discover that it’s the perfect place to take a break from the chaos of the continent. We liked it so much that we decided to book an apartment for an additional two weeks after our return from the South Pacific. 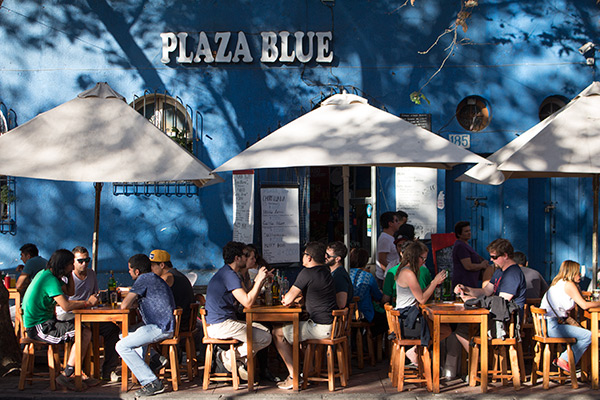 The Globetrotter Girls spent a whopping seven weeks here during their time in South America and explored every nook and cranny in the city. We highly recommend their Quick Guide to Santiago as well as their Go Beyond Central Santiago posts. They are excellent resources for people who want to explore Santiago in-depth.

Thanks to Hotel Ismael 312

We would like to thank Hotel Ismael 312 for hosting us during our first stay in Santiago de Chile. You really can’t beat the convenient location of this new boutique hotel next to Parque Forestal smack-dab in the middle of trendy Lastarria. 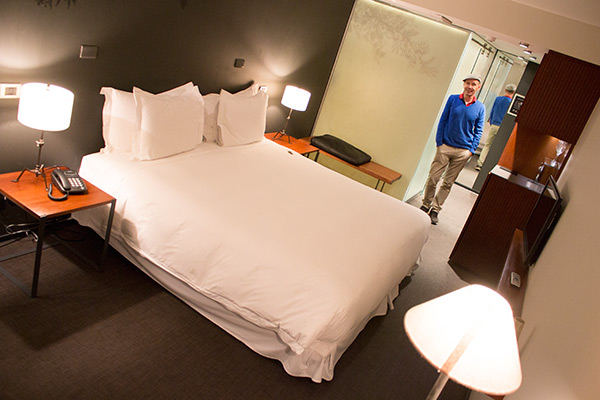 Our stylish standard room on the fifth floor was impressively quiet. We really appreciated the large double bed, top-notch bathroom, flat screen TV with cable, good WiFi, and the latest issue of Wired, the perfect magazine for digital nomads like us. We loved the dipping pool on the roof where we could relax, read and take in views over the park. 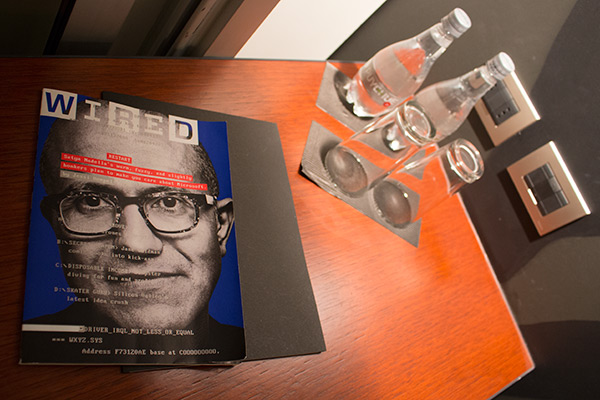 While most hotels in South America offer either small buffets or continental breakfasts, Hotel Ismael 312 takes a different approach with an included à la carte breakfast. Guests can choose whatever they like from the menu which includes an eclectic combination of items such as roast beef sandwiches, fruit platters, muffins, yogurts, and cheese cake. Pick as much as you want. On top of that, they serve fresh orange juice and excellent coffee (rather than the ubiquitous Nescafé). 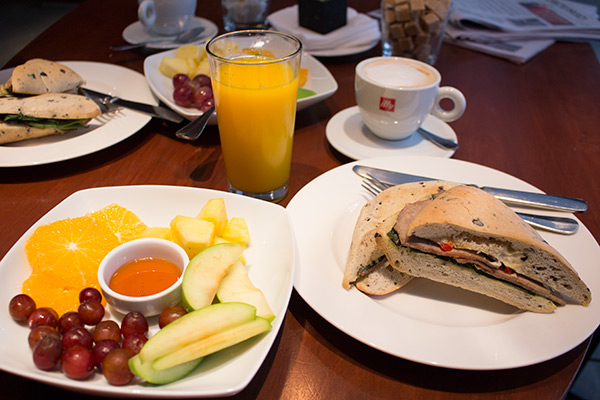 Lastly, thank you to the wonderful staff who provided us with a great map of downtown Santiago upon arrival and a much needed glass of welcome orange juice. They are a fun group who perfectly represent the edgy coolness of the “new Chile”. They were always available in case we needed any helpful tips.

If you would like to find out more about Hotel Ismael 312, or inquire about their room rates and services, visit them at www.hotelismael312.com. 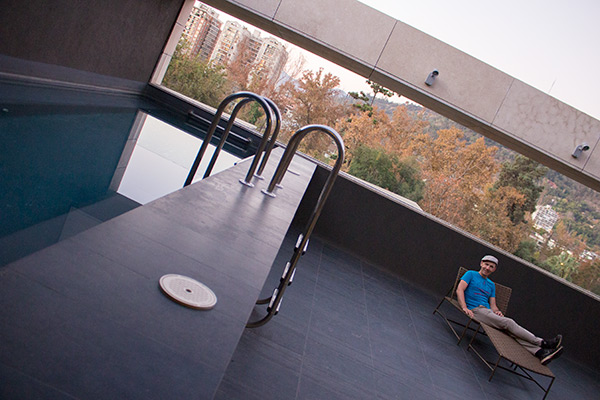 Disclosure: We were guests of Hotel Ismael 312 during our stay in Santiago. However, all of the opinions expressed here are our own.