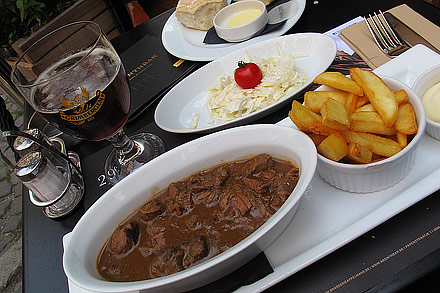 Stoofvlees is sometimes translated as beef stew and sometimes as pot roast. In fact, it’s something in between the two. However you translate it, it’s delicious. I would later discover the dish is offered in a thousand forms at restaurants throughout the city.

Apparently, the meat is cooked in beer and usually flavored with thyme and bay leaf. A little online research suggests that choice of beer and ingredients used to add a tangy sweetness are what distinguish various versions of the dish. The stoofvlees I had at Brasserie Appelmans, along with a cold Grimbergen Optimo Bruno, was absolutely delicious. (Although, as it was my first stoofvlees ever, I can’t really judge how it would stack up against other versions.)

Stoofvlees is often served with frites, otherwise known as fries. But don’t call them French fries here because they are not French, they’re Belgian. Historical records suggest that fries were invented in the Meuse Valley in Wallonia, the French-speaking southern half of Belgium. Belgians love their fries, and so far, I haven’t had a single meal without them.

So everyone (who is not vegetarian) add stoofvlees and frites to your list of must-eat dishes when you eat your way around the world – and don’t forget a good beer to go with it.

4 responses to “Stoofvlees and Frites”