Tokyo feels a world apart from the rest of the country, and from Earth in general. The city is wonderfully weird and inspirationally insane. Diving into the city’s lively Shinjuku neighborhood at night will probably be the closest you come to interstellar travel. Welcome to planet Crazy!

After exploring the city’s ever-clinking pachinko parlors, kooky Harajuku culture and anime emporiums, we were looking for the piece de resistance of crazy Tokyo experiences. Resistance was futile. There was no way we could escape the gravitational force of Tokyo’s insane Robot Restaurant, a futuristic electro-cabaret featuring a very distinct air of Disneyland meets Blade Runner. Merely approaching the restaurant, makes it clear that this is something different. 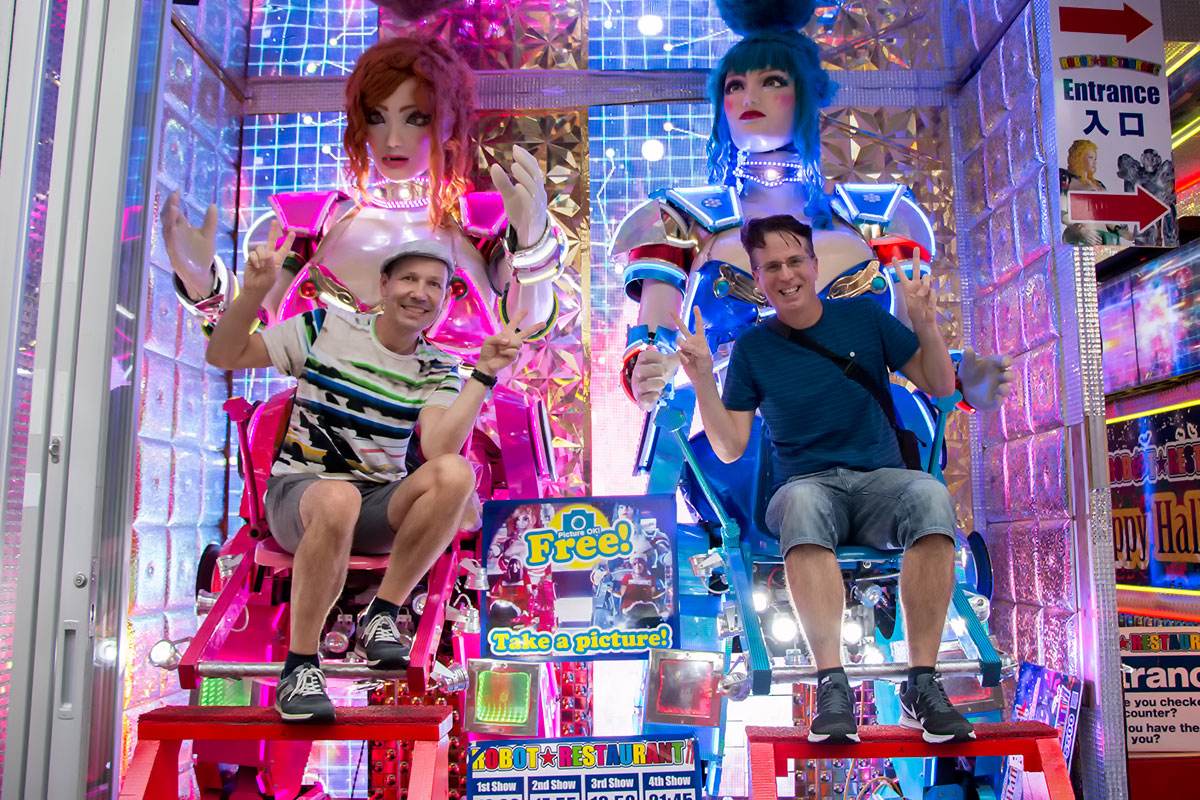 Our first photo op presented itself at the entrance where we were greeted by two huge pink and blue fembots. After posing with the very buxom Amazons from Mars, the real adventure began as we set foot into Liberace’s space ship, uhmm… I mean Robot Restaurant. The bar and lounge, where wide-eyed guests wait for the show to begin, sparkled from floor to ceiling: LED screens, crystals, a guitar-playing stormtrooper, mirrors, flashing lights, and giant golden seashell swivel chairs. Everything was shiny, reflective or blinking, including the fantastic bathrooms, which would fit perfectly into any intergalactic disco. 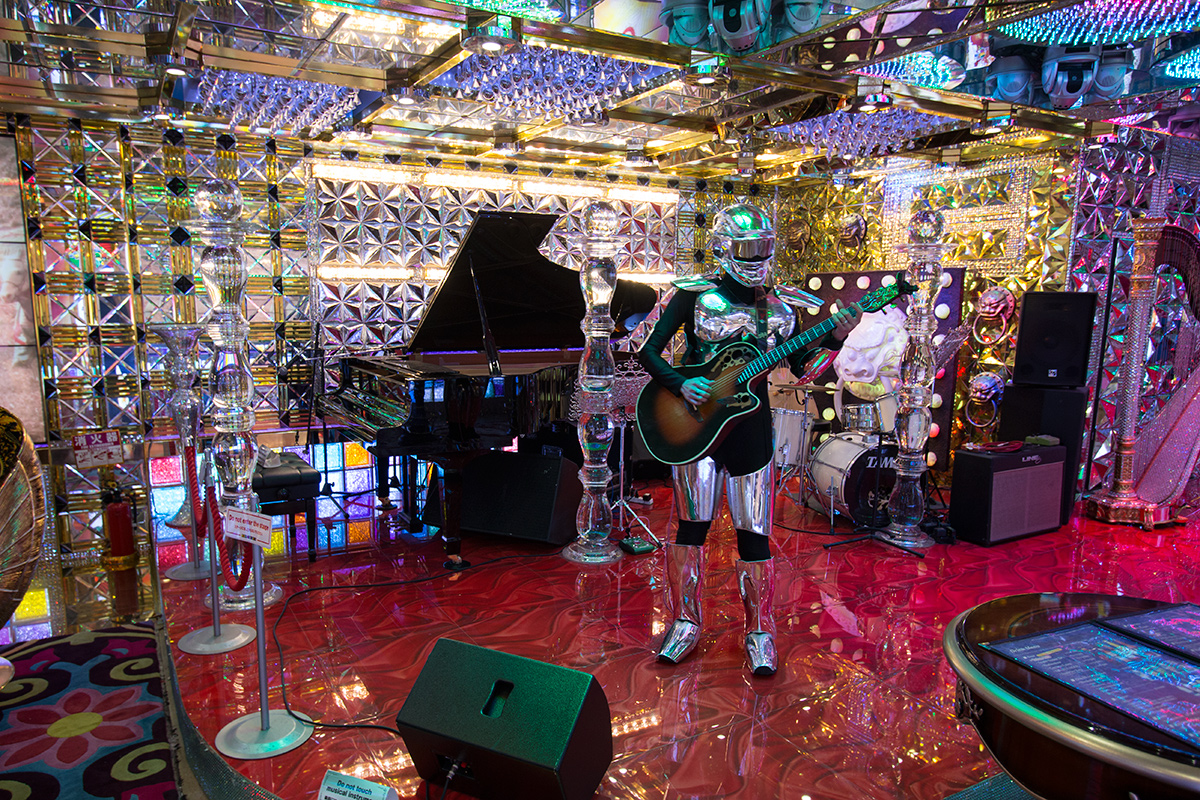 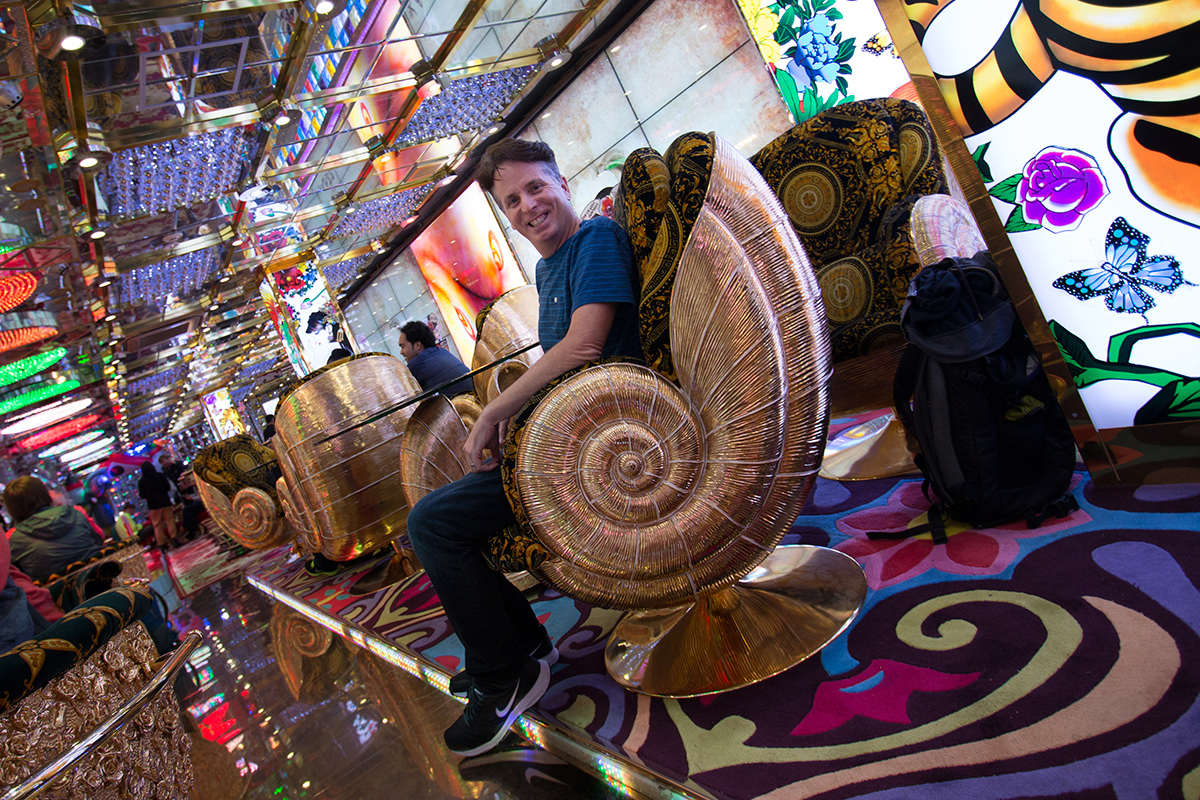 Dazed and reveling in the sensory overload, we sipped highballs and did donuts in our oversized seashell swivel chairs until a soothing voice announced the show was about to begin. The visual onslaught continued as we made our way down a dizzying staircase covered in so many colorful lights and mirrors that any celestial whorehouse in the galaxy would be envious. Then we stepped out of the wormhole-stairwell into a parallel universe. If Tokyo is planet Crazy, then the theater of Robot Restaurant is its capital. 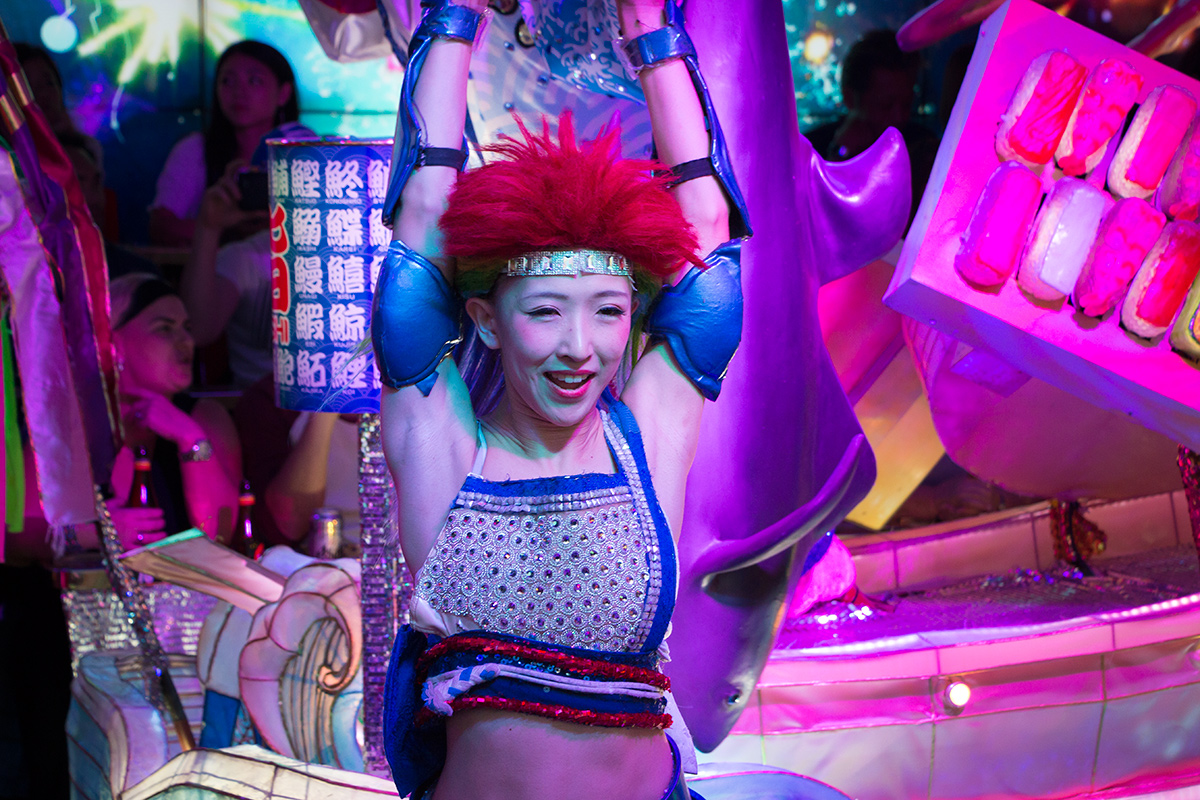 While the name “Robot Restaurant” may conjure up images of linen-covered tables and android waiters serving Japanese cuisine, there are no robot servants and there’s no traditional restaurant to speak of. The venue is laid out like a space-age Mayan ball court with a runway-like stage that runs through terraced seating. True, little tables are packed in for drinks and light meals such as their sushi bento plate or a dish vaguely called “ginger-simmered food,” but the food is not really why people come here. For most, it’s all about the show. 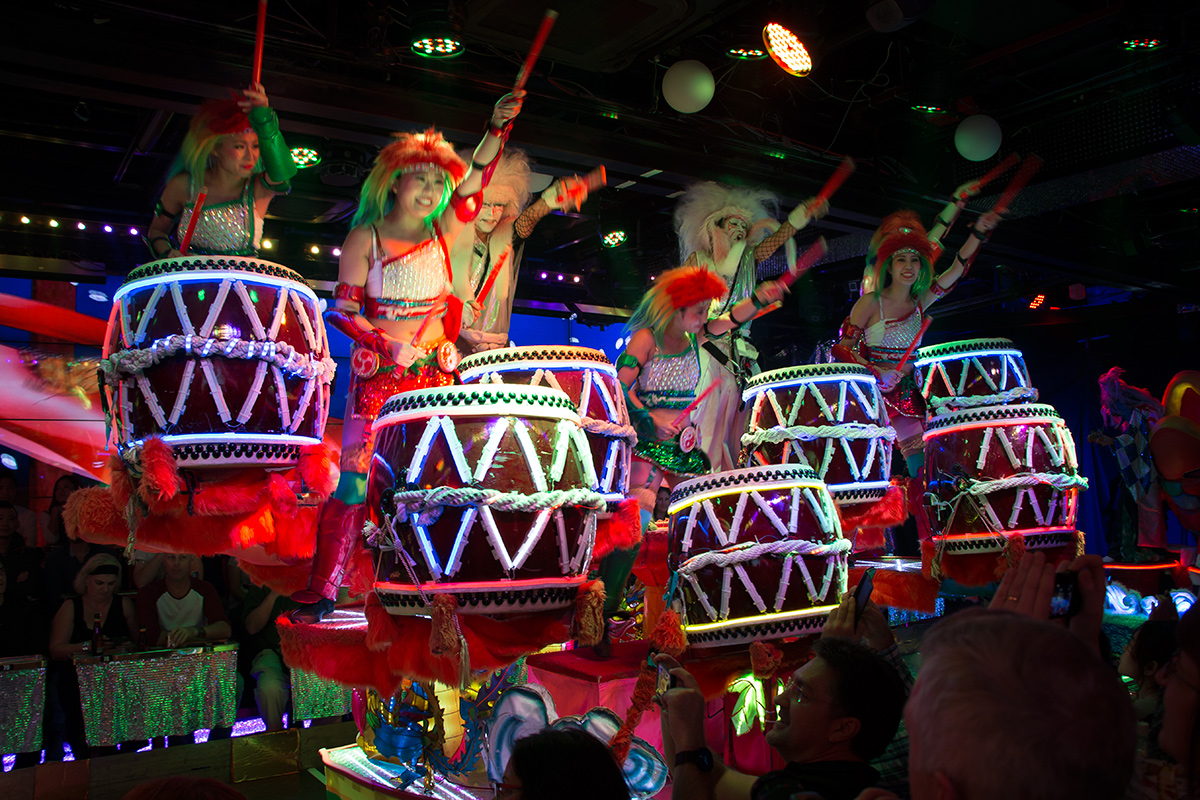 The show is literally the ultimate “battle of the planets.” (Sorry anime purists, that last reference probably left you groaning in disgust.) From all sides, Japamazons in rainbow-colored mullets and disco Kabuki characters rolled in on floats playing giant taiko drums. Girls in glittery samurai outfits twirled across the stage swinging their fans and swords as we all waved our glow sticks – or should I say mini-light sabers – to the pulsing rhythm. There were gyrating hips, there was stick-fighting galore, and, of course, tons of tribal singing. The walls shimmered with visions of space adventure and rainforest serenity as seizure-inducing laser beams danced across the crowds making sure you didn’t start to glaze over for even a second. Wow! 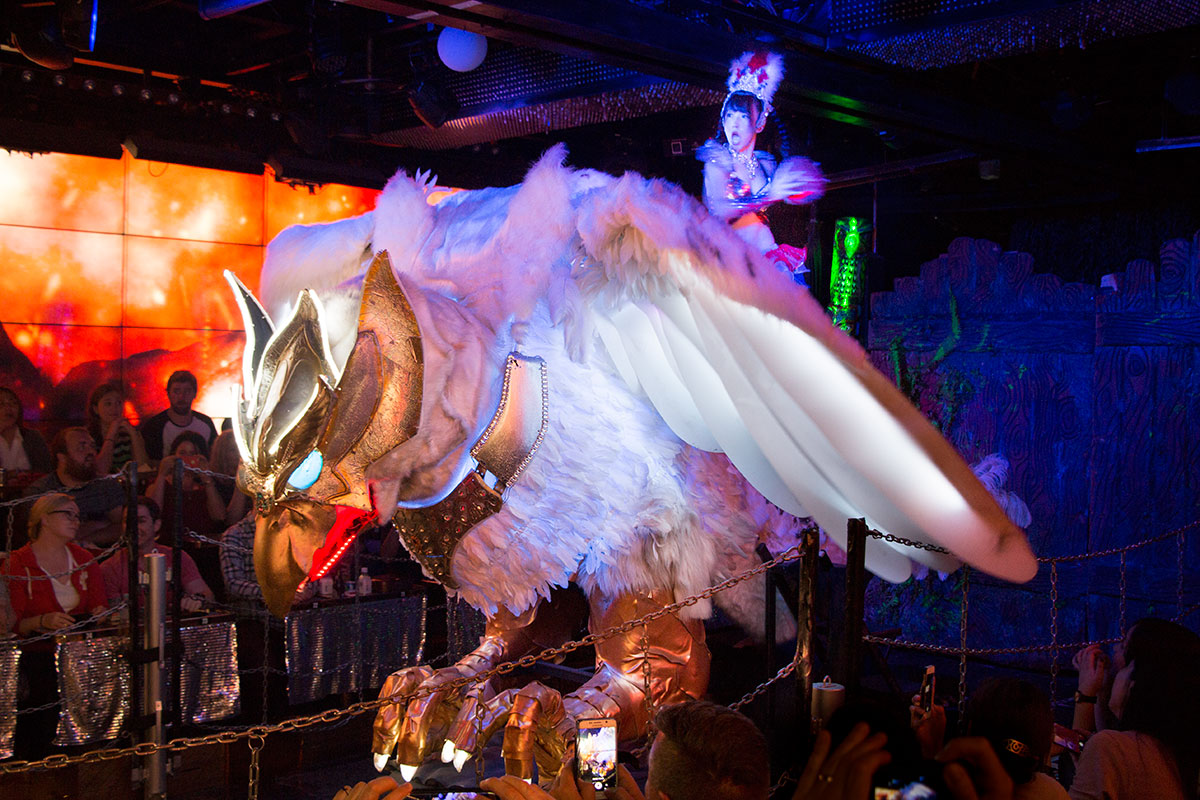 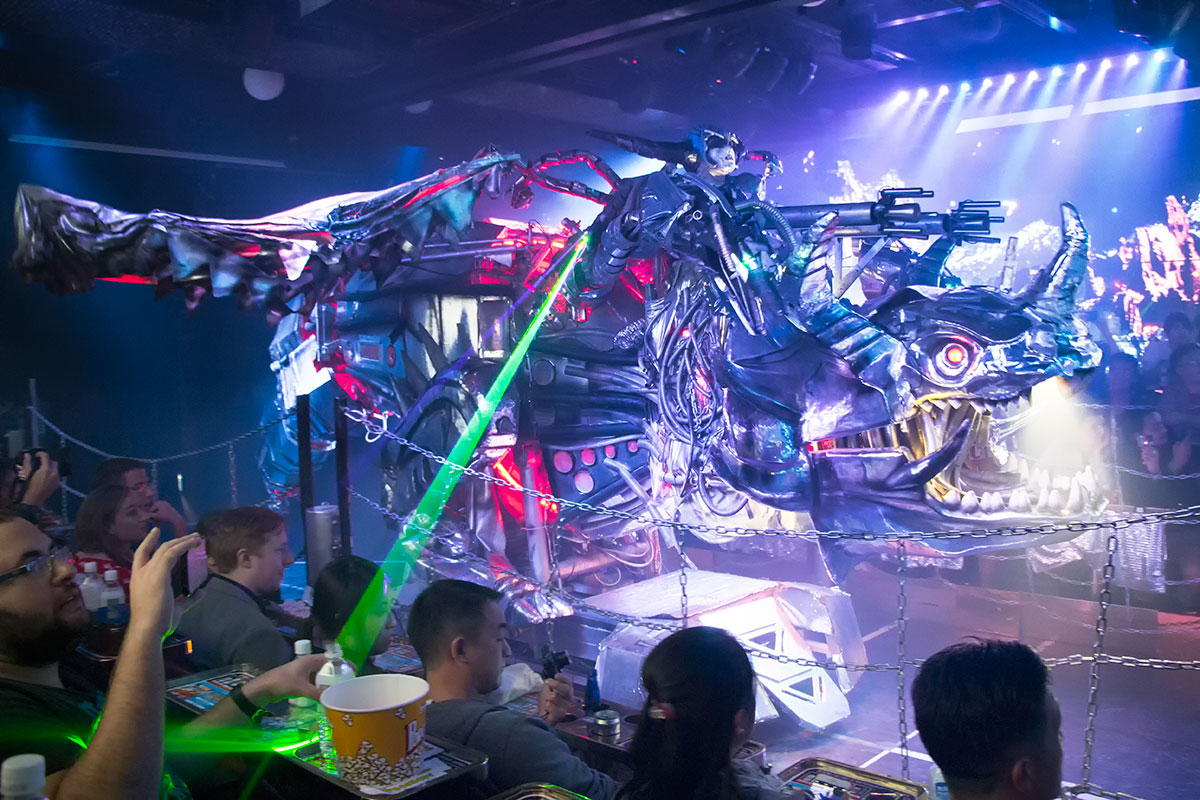 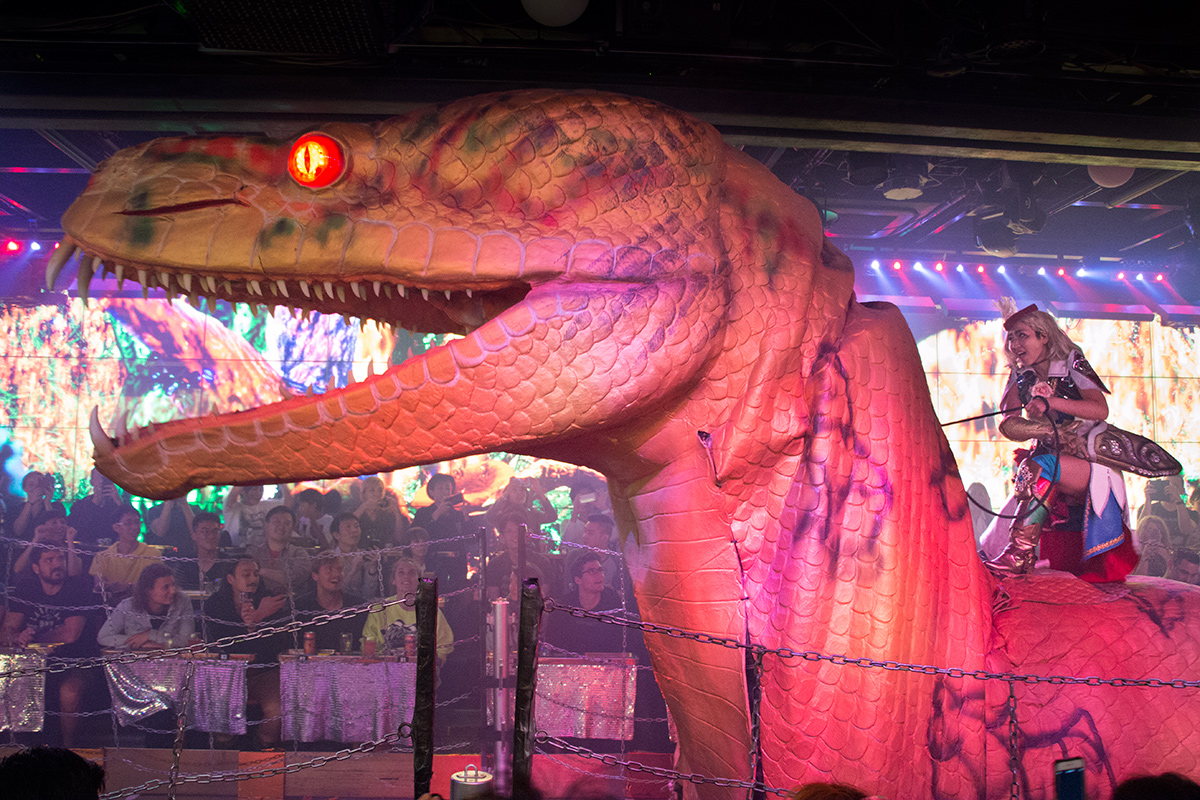 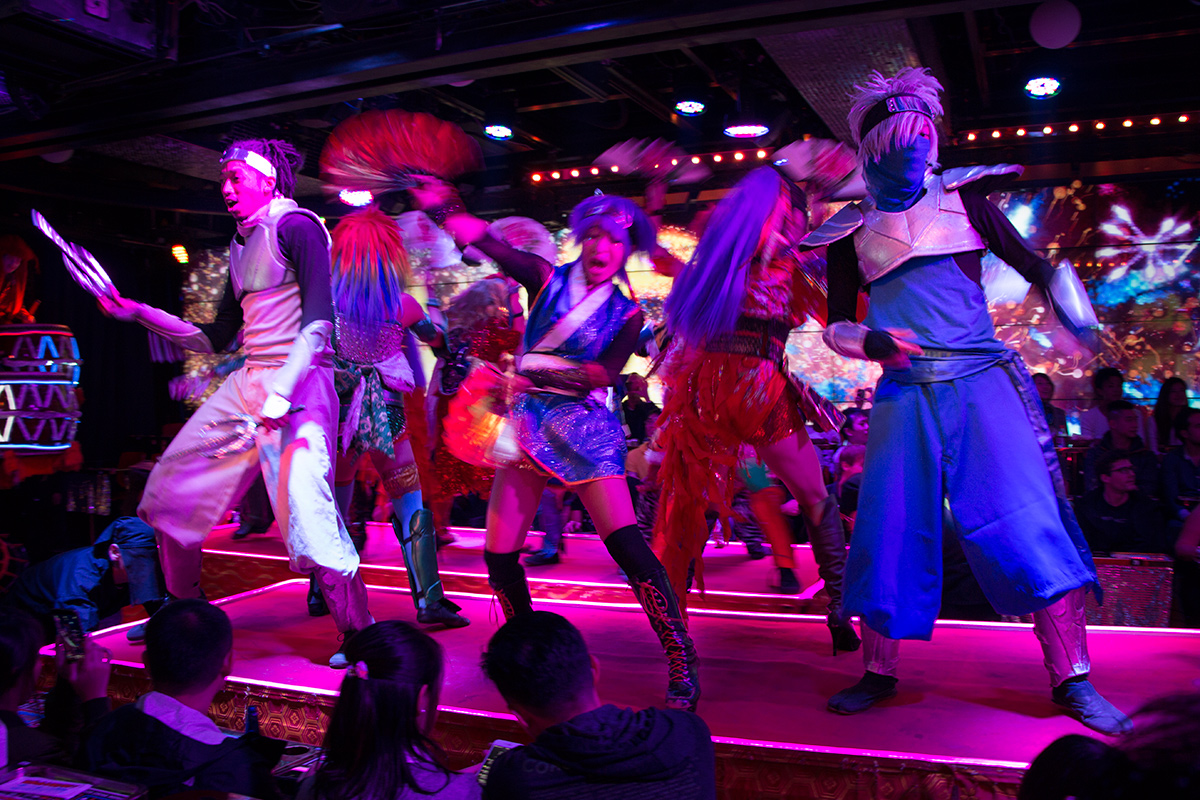 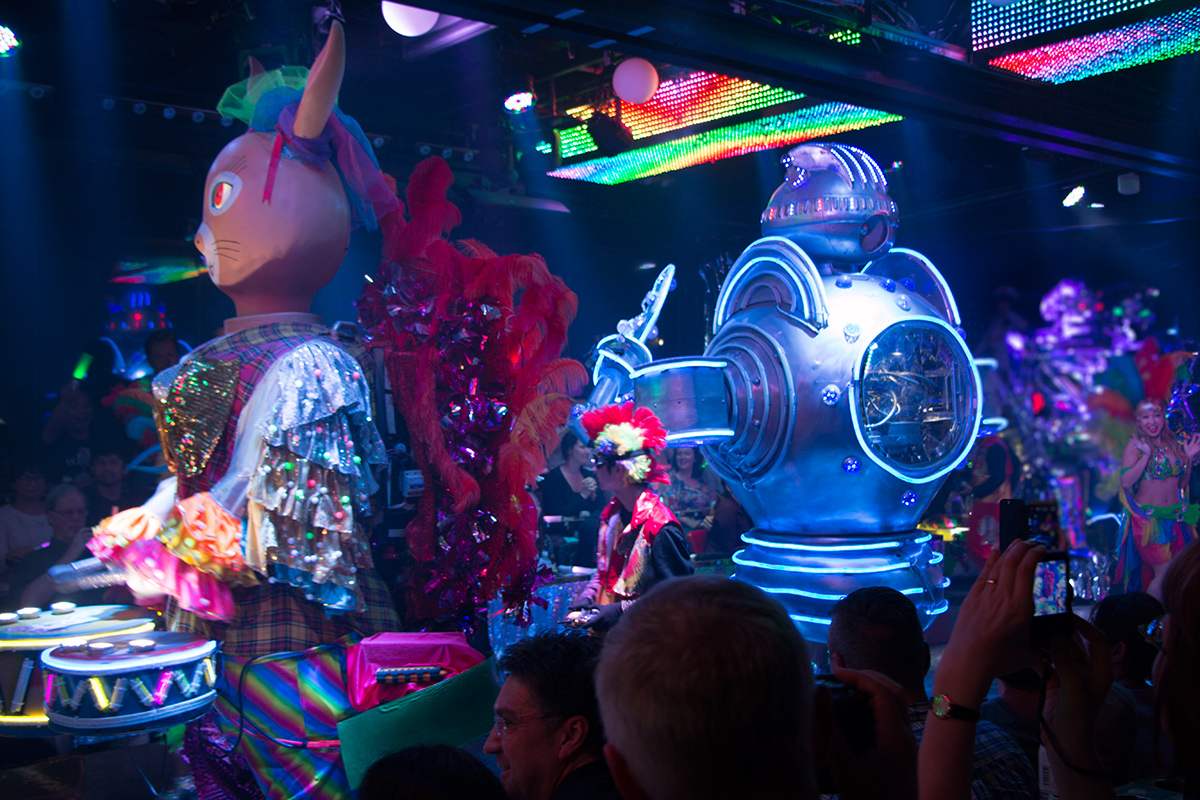 In the face of such horror, Tony and I enjoyed more highballs from behind the chain-link fence that was suddenly erected “for our protection.” The hour-and-a-half show ended with a robot parade extraordinaire that showcased piloted transformers and more fembots, guitar-playing horses and other fantastic beasts, feathery extraterrestrial samba dancers, musicians swinging from a float, and… a giant Pinocchio. (How did he get in there?) Only in Tokyo, and only in Robot Restaurant. We loved every second of this ultra-kitsch spectacle. 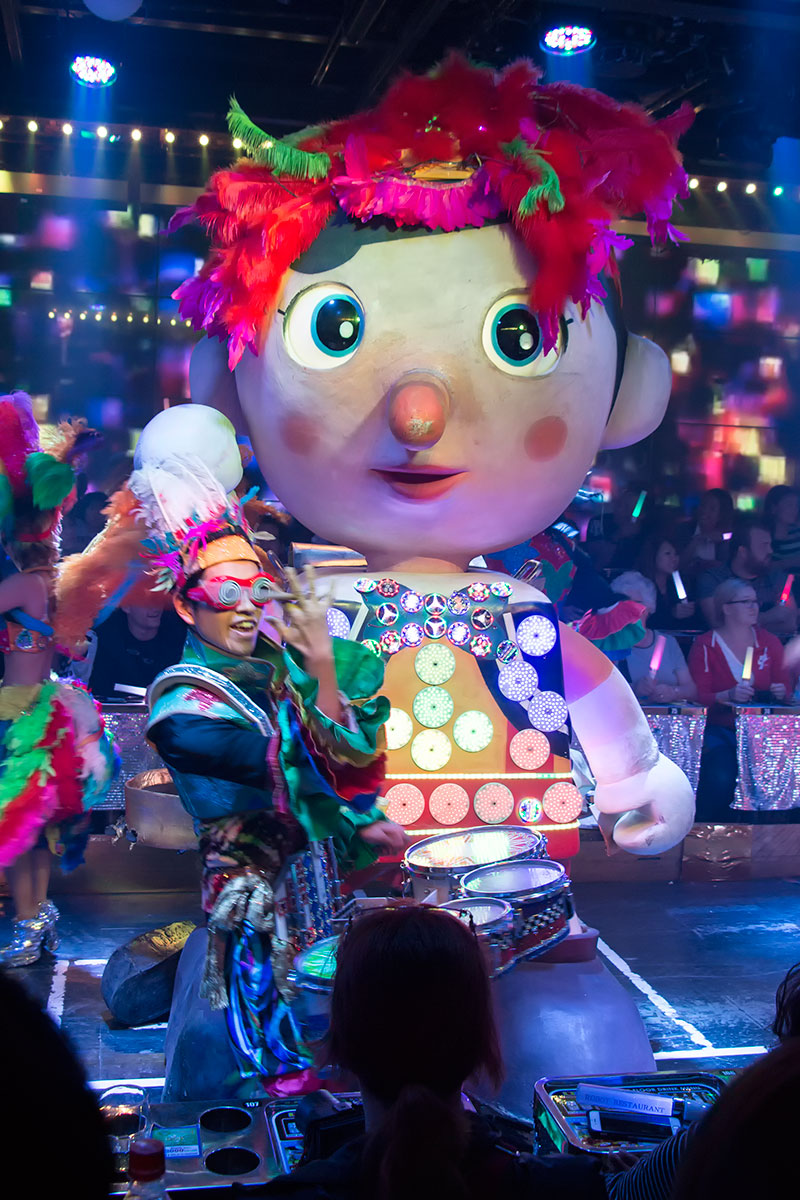 After the show, we emerged into the streets of Kabukicho dazed and delighted, like very happy abductees who had been returned to Earth. Yes, Robot Restaurant doesn’t do subtle, but if you are looking for an oh-so-Japanese experience, this is it. At a cost of 8,000 yen per person, not including food or drinks, entry tickets are not cheap – but absolutely worth it. To save some money on the entry and to make sure the show isn’t booked out during your stay in Tokyo, you can buy discounted Robot Restaurant tickets in advance on Viator. 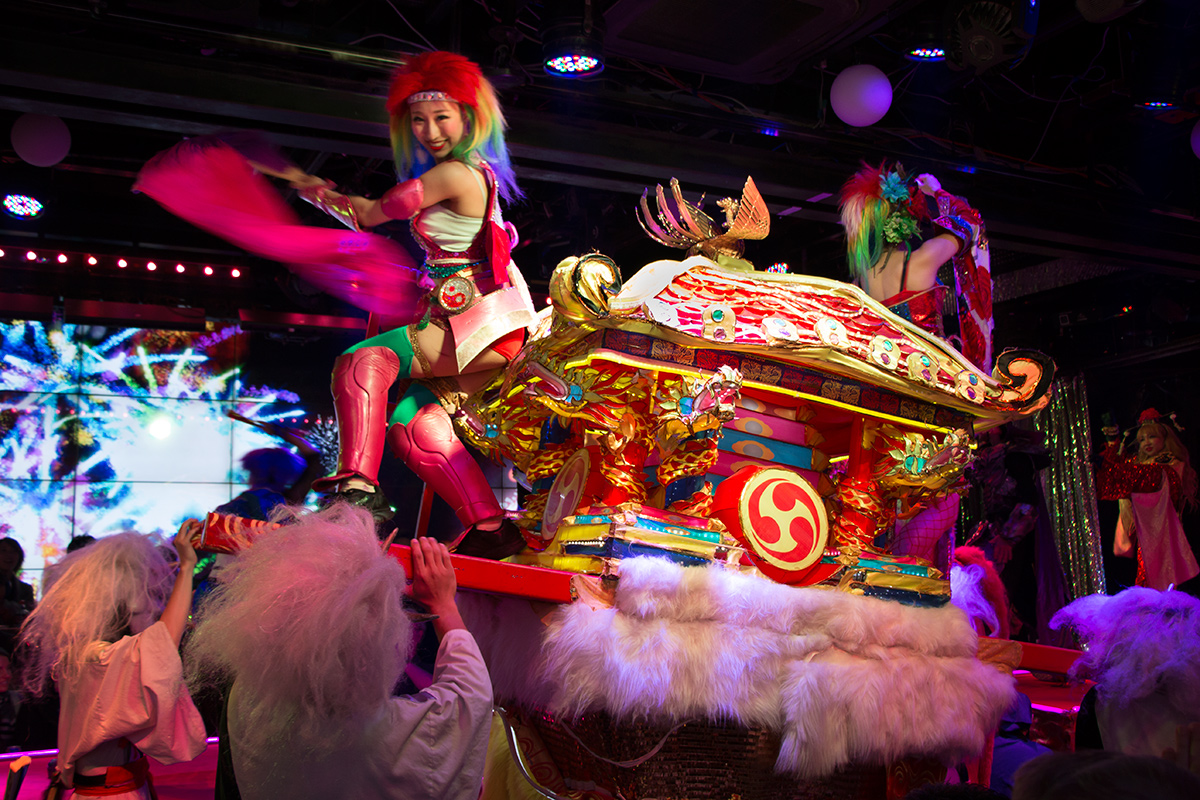 Disclosure: For our visit at Robot Restaurant, we were given one free media pass. However, all of the opinions expressed here are our own. Nano-nano. In addition, the article contains links that help us earn a small commission at no extra cost to you. Thank you for your support! 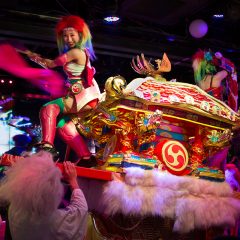 Stay in a traditional ryokan

The Sadachiyo Ryokan is a traditional Japanese inn & onsen offering tatami rooms with futons and kimonos.

Or stay in a capsule hotel

Shinjuku Kuyakusho-mae Capsule Hotel is a great budget option and cultural experience... if you're not claustrophobic.

Hundreds of hotels in one of Tokyo's most exciting neighborhoods.