Hanging out in Rio de Janeiro 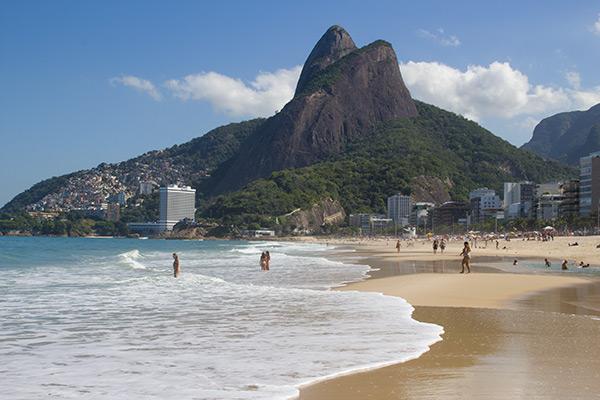 After spending a year and a half in Latin America, Rio de Janeiro was our final stop in the Americas before heading back to Europe. Rio is one of those epic, world-famous cities we always knew we wanted to spend some time in. While it is neither the capital nor the biggest city in Brazil (that would be Brasilia and São Paulo), Rio attracts the highest number of visitors of any city in the country. And we wanted to be part of that.

In my tourist fantasy, Rio was all about caipirinhas on Copacabana Beach, rhythmic samba music, boundless zest for life, and gorgeous Brazilians strutting their stuff on the powdery sands. And – oh my god – it’s all true! 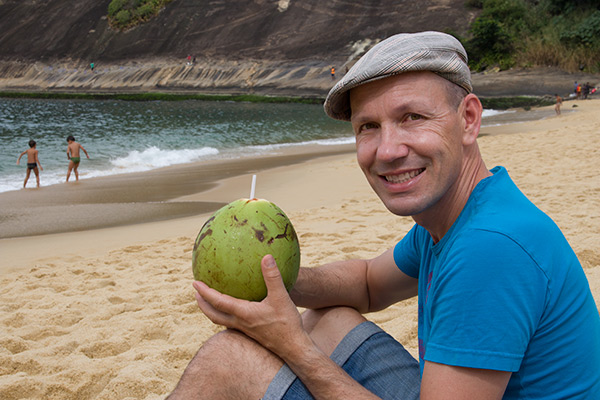 We spent nine blissful days on the beach which opened our eyes to what life could be (as long as you learn to keep those Brazilian blinders on). After some heavy-duty traveling through the southern part of the continent, this mini-vacation was exactly what we needed. Of course, it wasn’t all about sunbathing and cocktails. We also managed to squeeze in some of the most famous traveler hotspots in town, but fabulous beaches is exactly where I’m going to start. 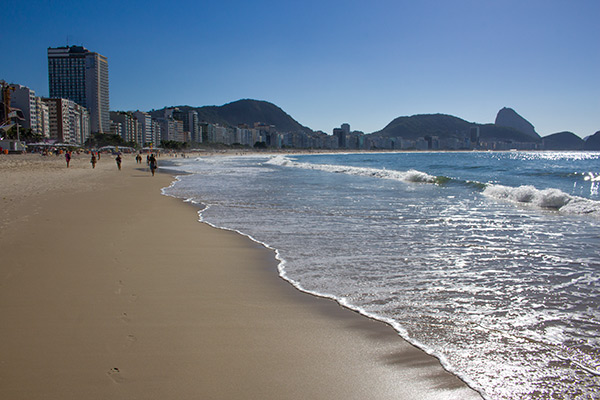 Copacabana evokes images of glitz and glamour. It’s where Rio’s high society used to mingle with artists, statesmen and royalty from all over the world. The posh 1920’s Copacabana Palace Hotel on the beachfront, playground for the rich and famous, is the embodiment of those glory days. Although the charm of Rio’s once fanciest neighborhood might have faded just a tad, it is still drawing in the crowds and fulfilling those tropical dreams. We had an inkling it would, so we rented an apartment right in the center of the legendary neighborhood within minutes of the beach. 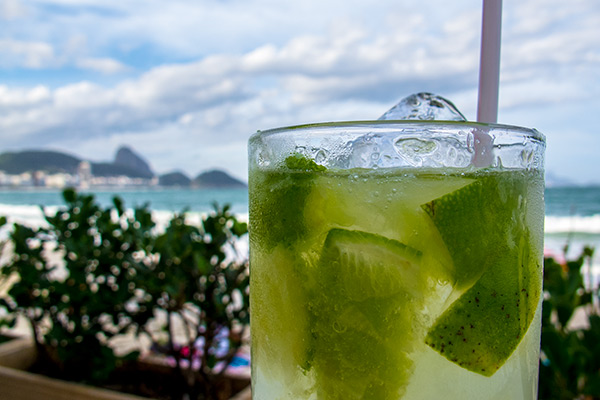 Superficially, Copacabana – with its tree-lined streets and Latin flair – reminded me a bit of Buenos Aires. But a second look revealed much more art deco and Brazilian modernism. Any doubt as to where we were vanished as soon as we crossed the busy Avenida Atlântica, which separates Copacabana’s luxury oceanfront apartments and high-end hotels from the beach, there was no mistaking this was 100 percent Brazil. 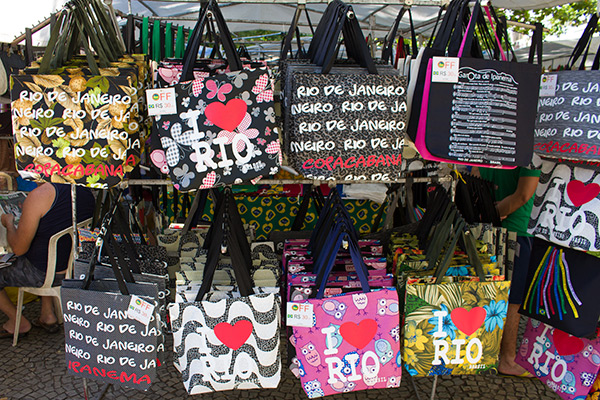 The curved, 4-kilometer long sweep of gorgeous sand with the famous Sugarloaf Mountain at one end screamed loud and clear, Rio de Janeiro! Whenever we got a chance, we took off our shoes, dug our feet into the sand and watched people play soccer and volleyball backed by the emerald waters. Although we spent pretty much every sunset at Copacabana Beach drinking 2-dollar caipirinhas at one of the many kiosks, we did most of our sunbathing in Ipanema. 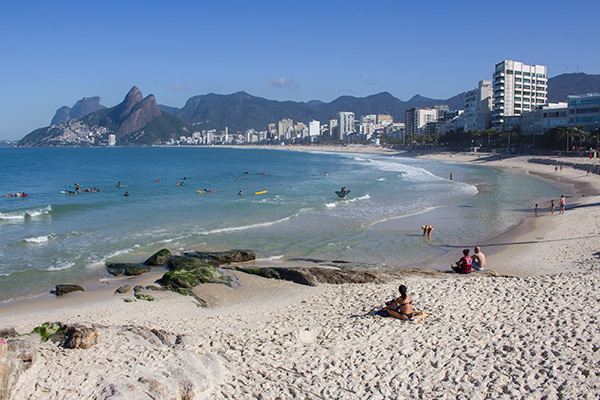 Every time we crossed from Copacabana into Ipanema, Tony and I couldn’t help but hum “The Girl from Ipanema.” We even caught ourselves whistling and playing air-maracas while swaying from side to side. Ipanema felt pretty much like an extension of Copacabana, perhaps a little less dated and a little more hip. Surf shops and stores selling colorful Havaianas lined the streets. Streams of people moved along the sidewalks, all seemingly heading to what the Travel Channel called one of the world’s sexiest beaches. Clearly, not a place we wanted to miss. 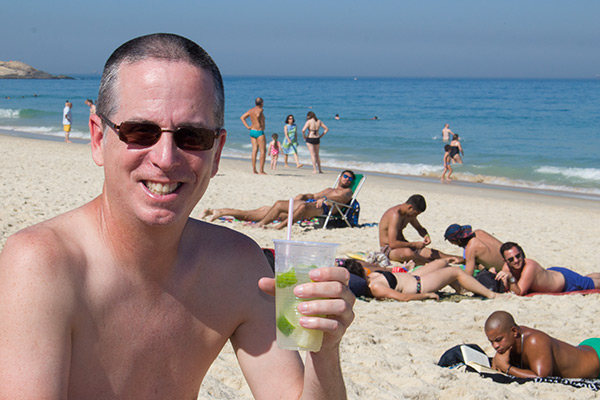 Unfortunately, the title bestowed on the beach didn’t do much for our self-esteem. Lying in a sea of bronze bodies, Tony and I felt like two Pillsbury doughboys. (Sorry Brazil, that’s what people look like after several months of being bundled up in Patagonia.) Body image issues definitely felt a little less dramatic after our second round of cocktails. 😉 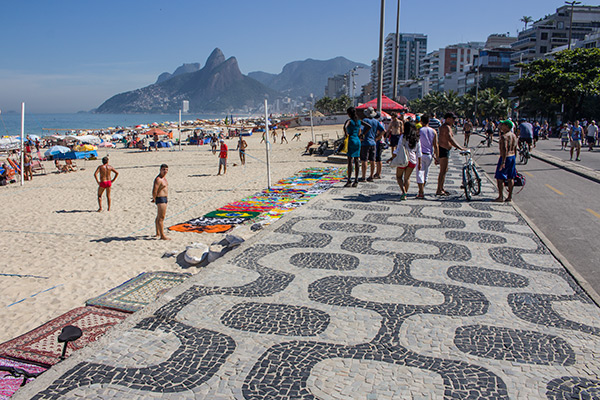 But even if you are not a beach bum, Ipanema is worth a visit. It’s absolutely gorgeous. The whole length of the beach is backed by modern high-rises. Joggers, tourists and street vendors intermingle on the black-and-white cobbled beach promenade, famous for its Portuguese influenced pavement designs. At the western end, the twin mountains Dois Irmãos rise steeply up separating the Vidigal favela from the fancy Ipanema and Leblon neighborhoods. At the eastern end, where Ipanema and Copacabana Beaches meet, surfers ride the waves at Rio’s most popular surf spot. 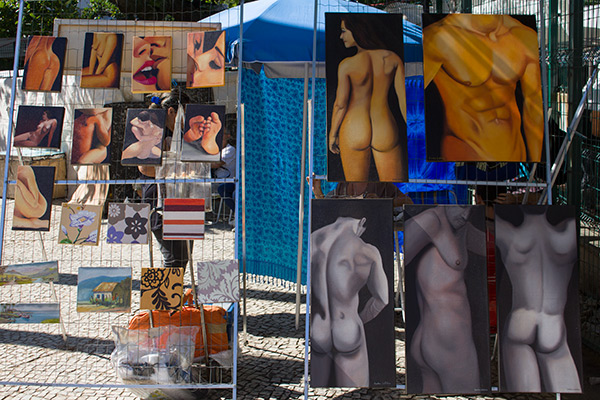 Christ the Redeemer on Corcovado Mountain 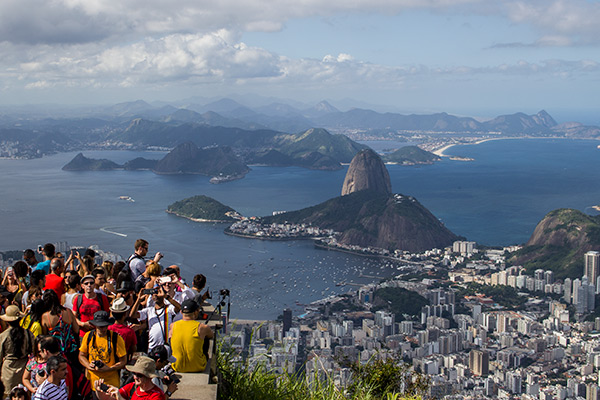 Rio’s most iconic landmark is the open-armed Christ the Redeemer on Corcovado Mountain. If you only do one thing in Rio, this should be it, especially since getting there is fairly easy. While some people prefer taking the red narrow-gauge train up to the Christ statue, we took a minivan from Praça do Lido in Copacabana for US$14; this included our return trip and the entrance fee. We thought our visit to one of the New 7 Wonders of the World was definitely worth sacrificing a day at the beach, especially for the incredible picture postcard views.

Given Cristo Redentor’s celebrity status, it was quite a fight getting those perfect views. We had to first elbow our way through a sea of selfie sticks to the edge of the viewing platform. Behind us, two hundred of our closest friends backed by the backlit silhouette of the 38-meter colossus; before us, unobstructed views of Rio de Janeiro 700 meters below. 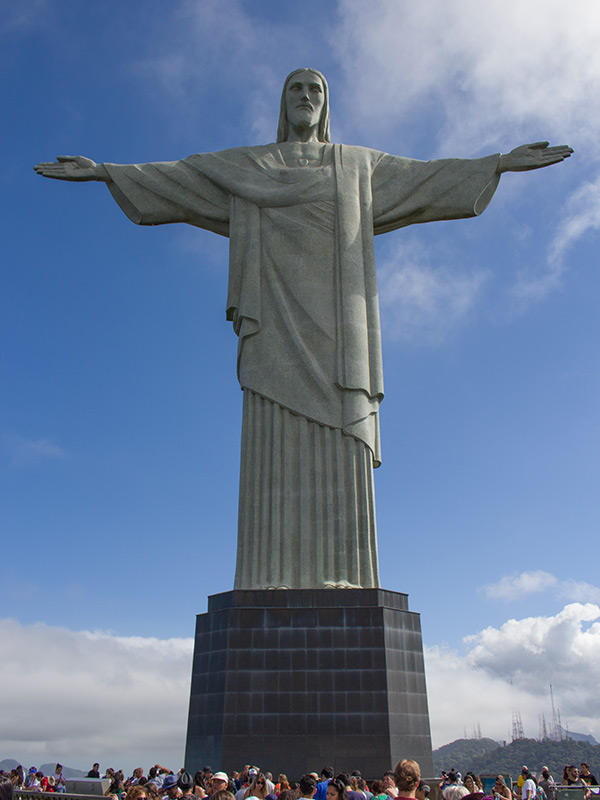 In the distance, we could make out the granite peak of Sugarloaf Mountain on Urca Peninsula and Guanabara Bay as well as Copacabana and Ipanema. Wedged in between the fancy neighborhoods were several favelas clinging to the hillsides. The sprawling favelas, low-income working-class communities, are named after a native stinging plant that once covered the hills. Today, it’s the Tijuca Forest on Corcovado Mountain that strikes the eye. The forest is the green lung of Rio and is only one of many green spaces worth exploring. 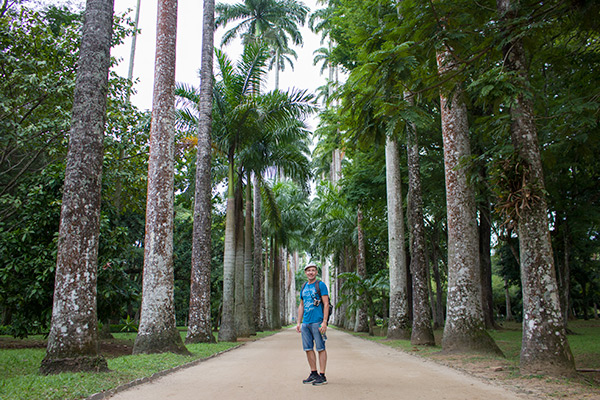 Most visitors probably don’t realize this, but Rio is home to one of the largest urban forests in the world, Tijuca National Park. Once covered in primary Atlantic Rainforest, the Tijuca Massif and the surrounding hills were cleared for growing coffee and sugar. Luckily, someone had enough sense to reforest the area in the late 19th century allowing the jungle to slowly reclaim its territory. Today, the entire area between Corcovado Mountain and the bay is an important sanctuary for many endemic animals and plants and was declared a UNESCO World Heritage Site in 2012. 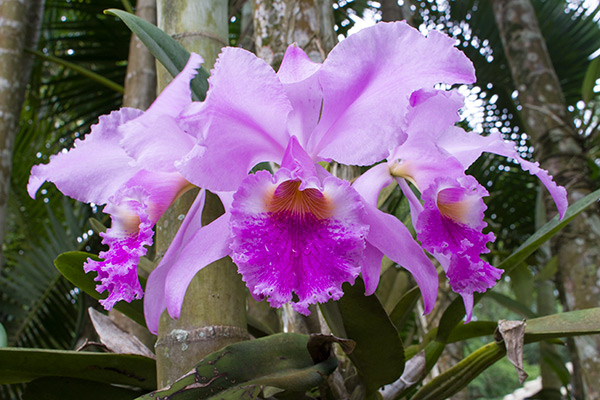 While there are several hiking trails leading to waterfalls and viewpoints, there are a few issues with hiking in Tijuca. First, access to many of the trailheads can be awkward requiring a taxi or a pricey tour. Second, the trails can be dangerous and robberies happen more than the government wants to admit. This is a serious problem on the walking trail up to Corcovado. In our vacation frame of mind, we decided to skip the complication. Instead, we stole ourselves away from Ipanema Beach and went on a leisurely walk along the picturesque Rodrigo de Freitas Lagoon to the Botanical Garden in Rio’s Zona Sul. 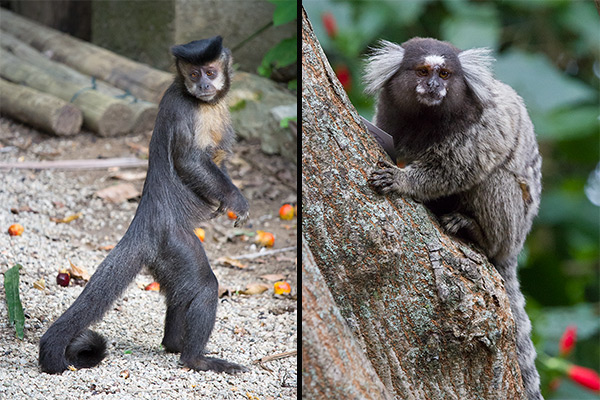 Just as the Tijuca Forest, the Botanical Garden has been declared a UNESCO World Heritage Site. Established in 1808, the garden is well-known for its thousands of plant species including a gorgeous avenue of royal palms and an extensive orchid collection. While we enjoyed the jungly feel, our main reason for visiting was the wildlife. We missed out on the brown-throated sloths, but were lucky enough to discover black capuchin monkeys, bright channel-billed toucans and tiny marmosets, super-jerky new-world primates from northeastern Brazil. Although considered an invading species in Rio de Janeiro, they are awfully cute – in a gremlin kind of way. 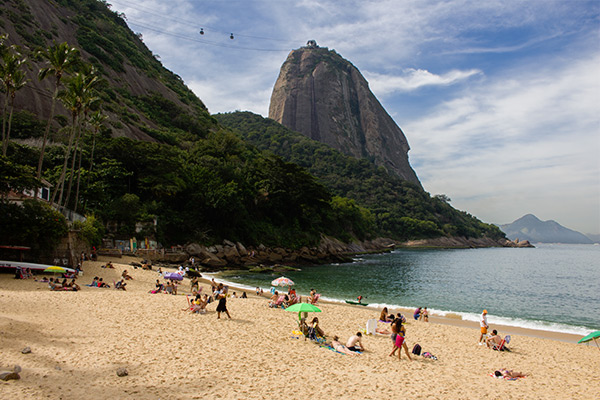 We also saw several dozen of these little guys on the Pista Cláudio Coutinho walking trail along the southern edge of Sugarloaf Mountain. The serene 2-kilometer nature walk on Urca Peninsula starts from one of Rio’s smallest beaches, Praia Vermelha. This is also the location from where visitors catch the cable car to the summit of Sugarloaf. We didn’t go up Sugarloaf on this visit, but instead relaxed on the reddish-yellow sands of the sheltered beach. Yet another great place to enjoy a coconut or cocktail. Just keep ’em coming!

The historical city center and around 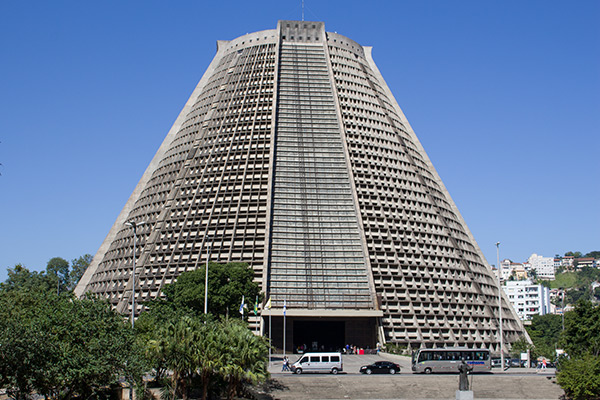 Even though we had no intentions of ever leaving the beach again, a little sunburn forced us into hiding. We took this as a sign that we needed to explore some of Rio’s other neighborhoods. The city’s historical center and commercial district seemed to offer enough interest for a half-day outing. What stood out most from the hodgepodge of tired office buildings, baroque churches, state-of-the-art architecture and grand colonial plazas was the modern Metropolitan Cathedral São Sebastião. Tony and I both thought that the gray minimalist cement cone – reminiscent of a Mayan pyramid – was one of the coolest, most unusual cathedrals we had ever seen. Accordingly, we spent an hour photographing it from every angle… 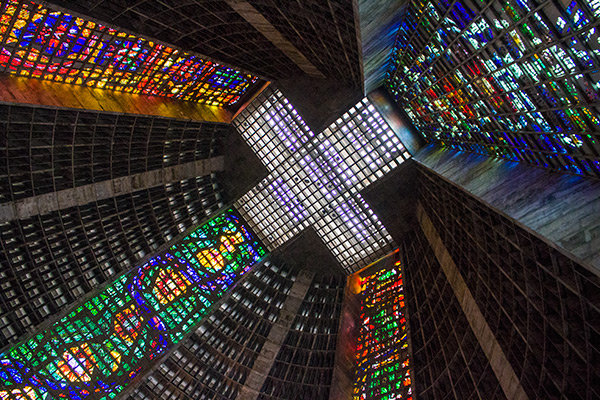 …until hunger pangs drove us into Confeitaria Colombo. The lavish art nouveau cafe from 1894 is the perfect place to stop for a sweet indulgence. Guests can choose from a huge assortment of fruity and chocolaty goodness. But that’s not all, the cafe is also a visual feast in its own right. Gorgeous stained-glass ceilings, rosewood-framed crystal mirrors from Antwerp, marble counter tops and lots of gold draw in the passersby in droves. We definitely enjoyed the luxurious setting and, of course, the walnut tart and chocolate-filled pastry. 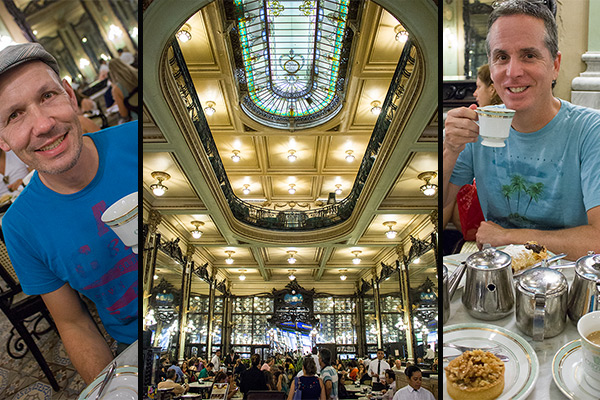 My personal highlight of the day was the Selarón staircase in Lapa. In 1990, Chilean-born artist Jorge Selarón started covering the dilapidated staircase outside his apartment with colorful ceramic tiles, turning the steps to the Convent of Santa Teresa into one of Rio’s most famous tourist attractions. He called his work of art a tribute to the Brazilian people. Ironically, the artist’s burnt body was found dead in 2013 on the staircase he had worked on for over two decades. The question of whether it was a homicide or suicide is still open. 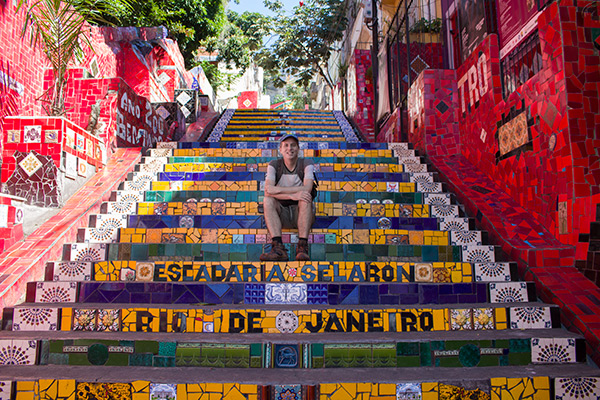 Back to the beach

While we lived out our tourist fantasy in Rio, we perfectly understood that the city has a dark side. Rio can be extremely dangerous if you happen to be in the wrong neighborhood or just in the wrong place at the wrong time. Keeping that in mind ALL THE TIME, we chose our destinations within the city carefully. While visiting parts of the historic center, we definitely felt more of an edge and one local even came up to us and told us to leave because it was “too late to be walking around” (it was 4:45pm). Danger is an unfortunate part of the Rio experience away from the main beaches and tourist hubs, so use your head. 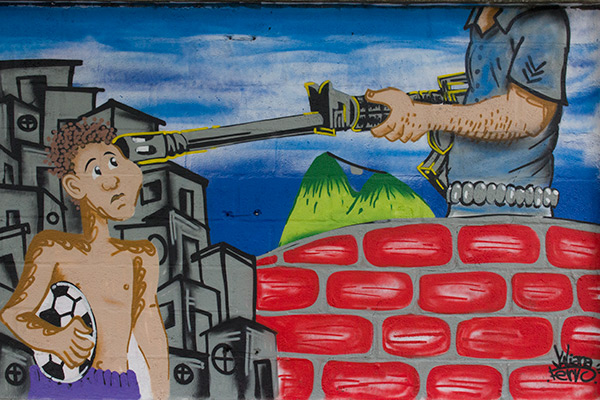 For our little mini-vacation, we really did enjoy just spending time in Copacabana and Ipanema and hanging out at the amazing beaches. After all, that’s what we had come for. I’m not ashamed to say it, but we absolutely loved doing pretty much nothing. Besides, Rio is such an amazing place that we have already decided to come back and do some more in-depth explorations of the whole state. We can’t wait to return. 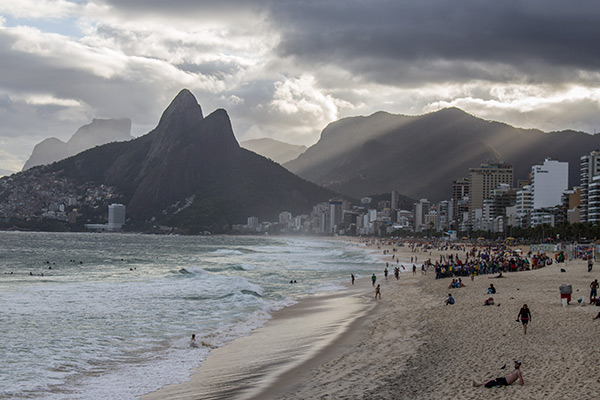 6 responses to “Hanging out in Rio de Janeiro”