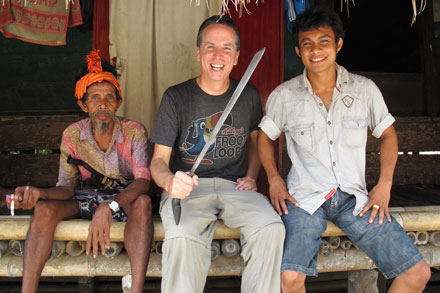 Hooray, I’m back! After flying to Kuta for medical treatment, Tony and I are reunited once again on the mysterious island of Sumba halfway between Bali and Alor. Sumba, Indonesia’s “Wild West” with its wide stretches of grassland and deserted beaches, promises to be a very different destination. Few tourists make it here, but the ones who do love it.

While tribal culture was only one aspect of traveling in Flores and Alor, it seems to be the dominating force in Sumba. The island is dotted with small traditional villages centered around ancestral megalithic tombs and giant stone altars. Skull trees, where Sumba warriors once displayed their trophies of battle, are relics from not-so-bygone times when head hunting was still common practice.

Although head hunting is no more, other rituals and ceremonies still play a vital role. One fascinating ritual is the Pasola in which hundreds of horsemen in traditional garb joust with wooden, hand-carved lances. Ouch! Despite the government-stipulated use of blunt lances rather than spears, riders die each year in these reenactments of tribal rivalry. Another bloody ritual is traditional Sumbanese boxing in which fighters wrap razor-sharp blades of grass around their fists and spar with rivals. 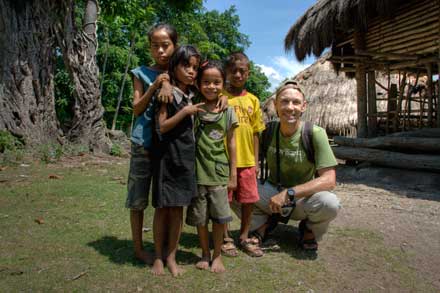 Yes, Sumbanese are a rough crowd, and violent behavior is not just limited to these staged events. Real tribal clashes are part of everyday life and, although heads generally don’t roll anymore, fights often end in fatalities. One of the biggest tribal conflicts in recent history was in 1998 when 3,000 horsemen armed with machetes rampaged through Waikabubak in western Sumba killing many people in the process. It’s easy to believe now when you see the men walking about with their long swords dangling from their belts. Quite intimidating, yet fascinating.

I have to say, after my time with the drunken hoards in Kuta, Bali’s tourist hub, I’m ready again for some adventures way off the beaten path. As you can see from the pictures above, we’ve already visited a couple of the villages… and come away with our heads still intact.

One response to “Rendezvous in Sumba”