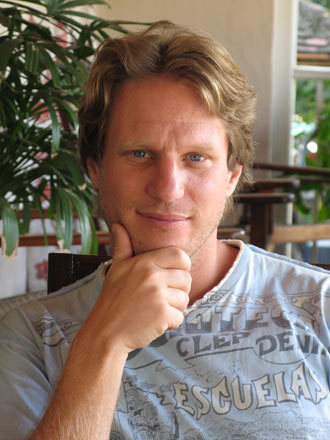 Yes, his Dudeness loves to travel. So much so that he is literally using his body to finance his wanderlust.

When Ralf finally admitted to himself that civil engineering wasn’t his thing, he quit university and became a full-time traveler embracing his nomadic heritage (in younger years, his dad’s job required the family to move around and live in different parts of the world).

After an initial stint through South America, he started to combine work and travel spending time in Australia, New Zealand and Canada on work/holiday visas doing seasonal jobs to support his addiction. But when he returned to Europe, where he worked in the London Underground for 5 months, he got involved in a totally different, much more lucrative, line of work – drugs.

Ok, this may not be much of a stretch for a Dutch person – drugs like marijuana are legal in the Netherlands, but we’re talking serious drugs. Medication for heart disease, high cholesterol or blood pressure – you name it. And he’s not selling them, he’s taking them.

For the last three years, Ralf has been participating in medical trials. Call him a guinea pig, or lab rat, but the drug research companies pay him anywhere from 120 – 160 British pounds a day. That means, for a 3-week in-clinic trial, during which time he probably spends a lot of his day in bed flirting with the nurses, he gets close to 3,000 British pounds. Quite a chunk of money, and certainly enough for him to backpack for the better part of the year. He’s actually gone from Holland to India overland hitting some exciting countries, including: Germany, Austria, Slovenia, Croatia, Montenegro, Albania, Macedonia, Bulgaria, Turkey, Georgia, Armenia, Azerbaijan, Iran, Afghanistan, Pakistan, India and Sri Lanka, where we met him.

Being a human lab rat is not for everyone, definitely not for a hypochondriac like myself. I’d probably be a very bad patient having all the side effects and complaining a lot. But Ralf has been fine, no problems so far, just a whole lot of cash at the end of a trial. One hell of a move to support your nomadic lifestyle!

Check out his great travel blog.

3 responses to “Ralf His Dudeness from Holland”