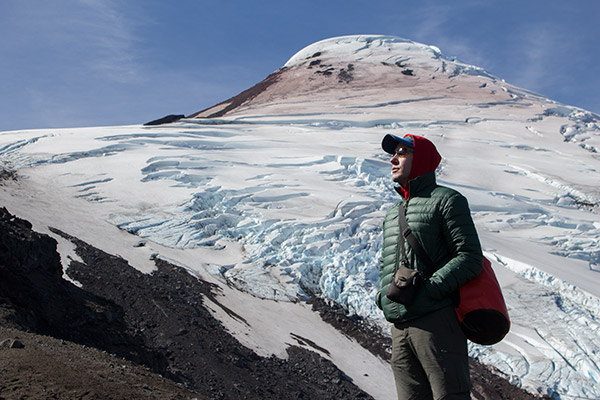 “Aqui Kuchen,” announced the rickety roadside sign in a comical mix of Spanish and German. I started to drool as we drove past the rustic café in our rented Toyota Urban Cruiser. As if the cake sign weren’t distraction enough, the route along Lake Llanquihue was absolutely gorgeous making it more difficult for me to keep my eyes on the road. Snow-covered Osorno Volcano loomed tall across the water, partially hidden from view by giant conifers. I pulled down the visor and stole a glance at the picture-perfect cone we were about to visit. Talk about Fahrvergnügen!

We had arrived in Chile’s spectacular Lake District a few days earlier. The picturesque region, settled by German immigrants in the mid-1850’s, is a sprawling region of glacial lakes and towering volcanoes, quaint German villages and epic national parks. Not surprisingly, it is a popular destination for outdoor adventurers and culture enthusiasts alike. 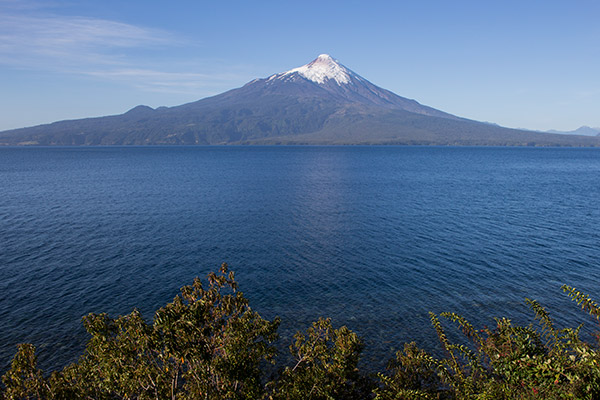 Mind-boggling landscapes AND German cakes? We were obviously in heaven. The cultural transition from Bariloche, Argentina to the lakeside town of Puerto Varas, Chile was quite noticeable. From the German-style wood-shingled houses to German street names to German-inspired food, the quirky little town was brimming with Germanness. I felt strangely at home. Even today, 165 years after being exiled from the revolution-torn German Confederation, locals in the area continued to cultivate their German heritage… with a major focus on baked goods.

Woosh! The giant “Strudel” sign practically slapped me across the face as we rolled past on our way to Osorno Volcano.

“Eyes on the road!” Tony demanded. I couldn’t believe the gall.

“My eyes ARE on the road!” I yelled, cranking my head around to check out the tempting signpost.

He obviously didn’t understand me. Cake and I go way back. It’s an instinct, a primal urge controlled by genetics. Duh! For the time being, I had to focus on the road, but I was subconsciously filing away places to sample German cakes after our visit to Osorno. 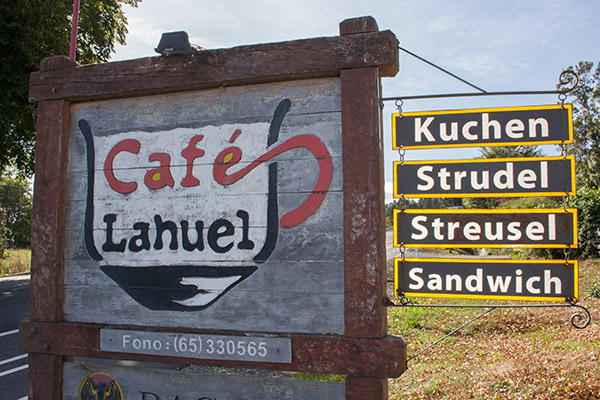 The winding road snaked up the steep cone quickly taking us past the tree line into a charred landscape of twisted rock and volcanic rubble. As we zigzagged our way to the top, the color contrast between the massive turquoise lake below and the cracked blackened slope leading up became increasingly apparent. When the road stopped, we switched from our car to the chairlift. Hopefully, the view would be worth the hefty US$22 a person price tag. 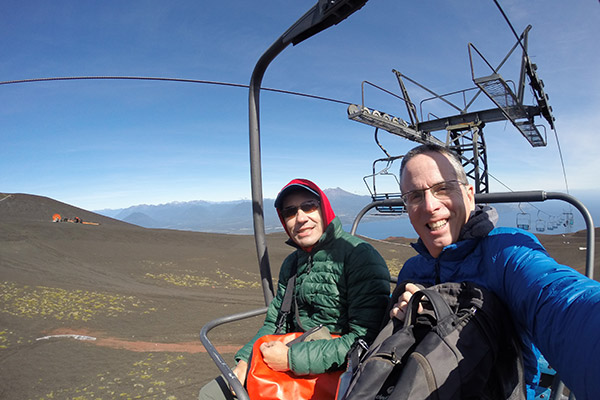 Icy gusts of wind jolted our chair from side to side as we rattled up the pockmarked slope. The breezy ride took us over a bizarre moonscape of red and black craters. It was freezing! Our down jackets, which had been thrown in the car as an afterthought, were our best friends at the moment. As we moved higher toward the 1,700-meter lookout, the glacier-clad summit came into full view. The helmet of ice completely covered the beast’s head; it looked like a volcanic warrior ready for battle. We were so busy trying to frame the perfect photo that we almost missed our jumping-off point.

We climbed up the last few hundred meters to the fractured, fissured glacier and admired the breathtaking panorama. Behind us, a string of tiny villages dotted the shoreline of Lake Llanquihue. Deep-green forest spread from the water’s edge over the rugged land. A single fluffy cloud drifted by below. 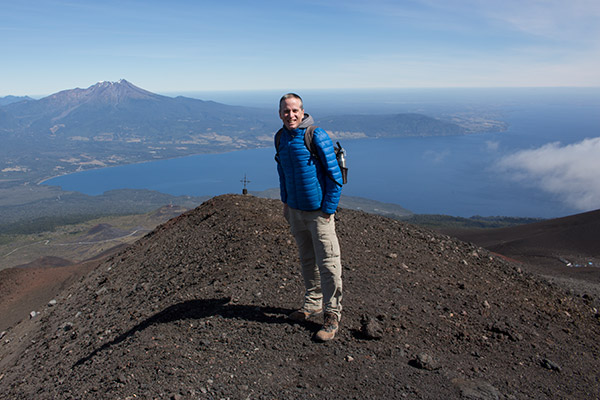 There we were, standing on top of the region’s iconic volcano which has lain dormant since 1869. A century and a half of inactivity provided the sweet illusion of safety… but volcanoes are sneaky devils. The neighboring Calbuco Volcano dominated the land to our left, its serrated crater covered with ice and snow. On the surface, everything looked peaceful. But appearances can be deceptive. Little did we know that one month after our visit, Calbuco would erupt sending clouds of ash ten kilometers into the sky and forcing the Chilean government to evacuate thousands of people in the area. Talk about lucky timing… for us! 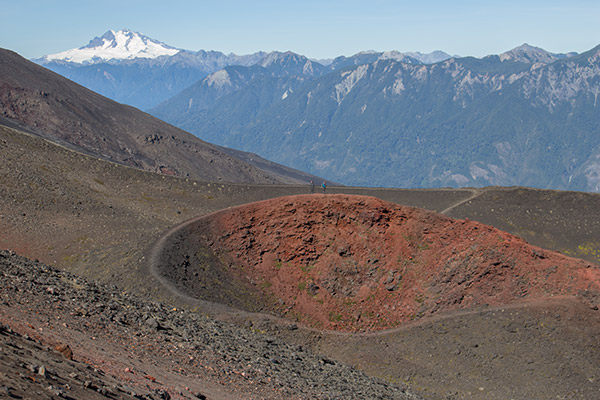 Frigid winds at the top forced us to abandon our viewpoint. We took the chairlift down to an intermediate station and continued on foot via a series of connected wooden walkways. One particularly perfect crater off the path attracted our attention. We took a little detour and circled the red crater on a narrow trail along its steep, crumbling walls. In the distance, we could see the snowy peak of Tronador Volcano. Amazing! By the time we reached the car, we had worked up quite an appetite and headed straight for Café Lahuel on the road to Puerto Varas. 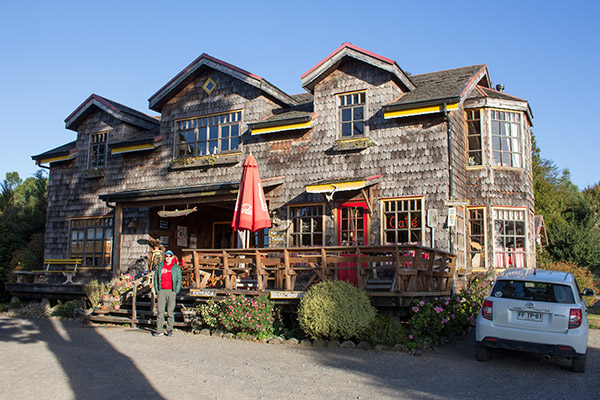 The café was set back from the main road next to a little shingled church. A red neon sign in the window signaled the café was open for business. We stepped through the door into a wood-paneled room resembling a cozy Alpine ski hut. I immediately spotted a beautiful German cheese cake on the counter. This was exactly what I needed. We sat down and each had a piece savoring every bite. Layered with apples and raisins, the cheese cake tasted just like my grandma’s. Mmhh, wunderbar! 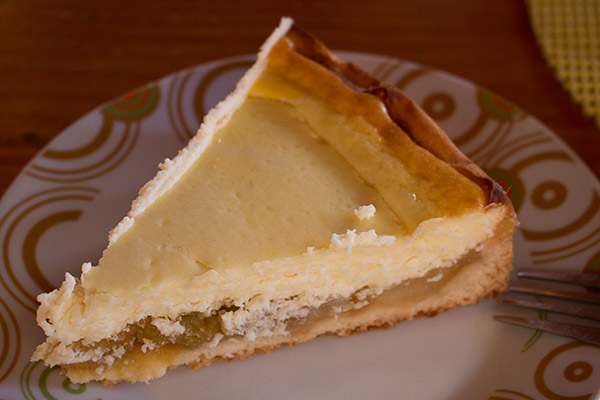 As we left the café, we passed a wall of black-and-white photography. Some of the photos showed a violent volcanic eruption, Calbuco Volcano during its last major outbreak in 1961. Most locals seemed to think the danger had passed. But even as we stood there, Calbuco was plotting to replace those fading images with 2015 digital prints. 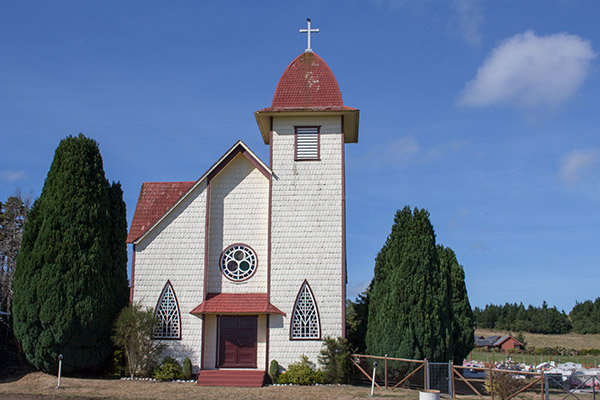 Back in Puerto Varas, we returned our Toyota to Cabañas Dresden, a reliable car rental agency on the outskirts of town. The owner Karin, whose German grandfather came to Chile during World War I, was already waiting.

“Bremse? Y Schlüssel”? she inquired about the emergency brake and keys in a Spanish-German pigeon before slipping into rapid Spanish.

The conversation continued for a while switching back and forth between the two languages. I was slowly getting the hang of it. At the end, I was pretty fluent in… what? Sperman? Mmhh, it just didn’t sound right. After saying our hasta-luegos, we went for a walk to check out a bit more of the town’s attractions. 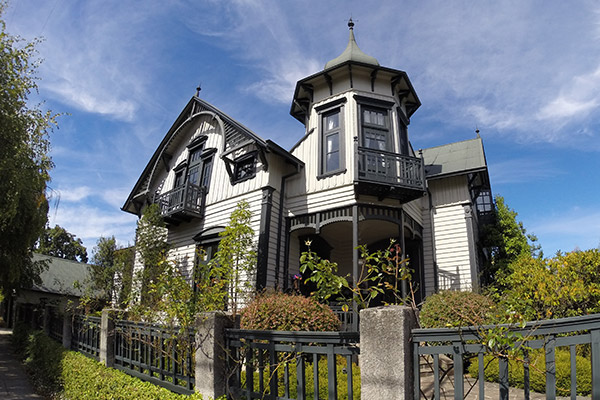 We passed several historical buildings from the early 20th century. With names like Raddatz, Götschlich, Jüpner and Kuschel, these casas were unmistakably of German origin. (Casa Kuschel is owned by Doug Tompkins, co-founder of The North Face.) Most of the casas have been restored and declared national monuments, and now serve as offices, shops or guesthouses. One such example was our own B&B the Guest House, also known as Casa Kortmann. 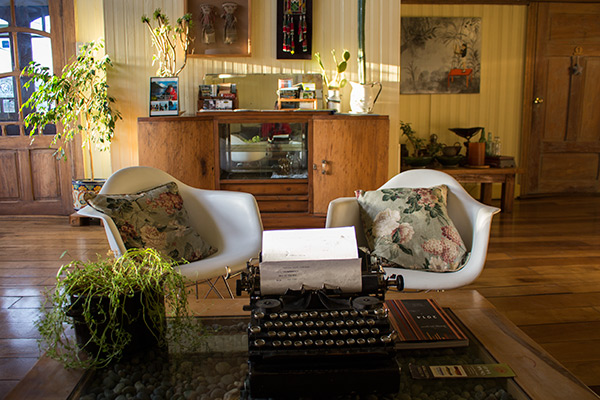 The small boutique hotel, which marks the transition from Patagonian Victorian to the local take on art deco, serves as a great introduction to the town’s architectural heritage. Built in 1926, The house is a dream done in local woods with shiny parquet floors, paneled walls, and beautifully carved doors. All the rooms are decorated with interesting art and quirky touches like a racing bike suspended from the ceiling or a period typewriter on the coffee table. I had a feeling this was not your typical casa. The owners Josefina and Willy had obviously gone out of their way to create a very special place where guests could mingle and feel right at home. 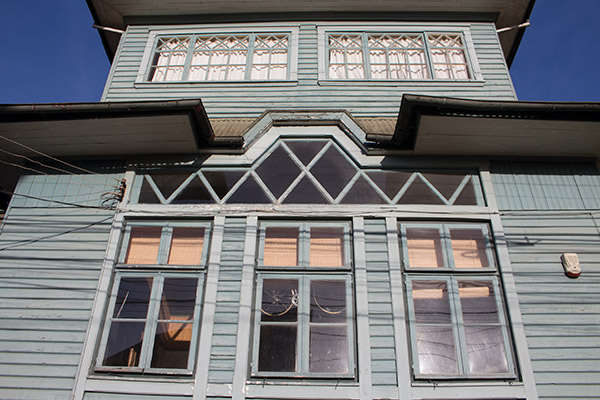 Two of the guests, German couple Ilona and Martin, joined us the next day on a hike in Vicente Pérez Rosales National Park. The four of us hopped a local bus to the trailhead near the small town of Petrohué via the scenic route along Llanquihue Lake and Petrohué River. The park, situated on Lake Todos los Santos, preserves a gorgeous stretch of forest ringed in by volcanic peaks and plugs. We opted for the Alerce Trail, a 3-hour loop, which combines that beautiful forest with the charcoal sands and crystal waters of the lake. 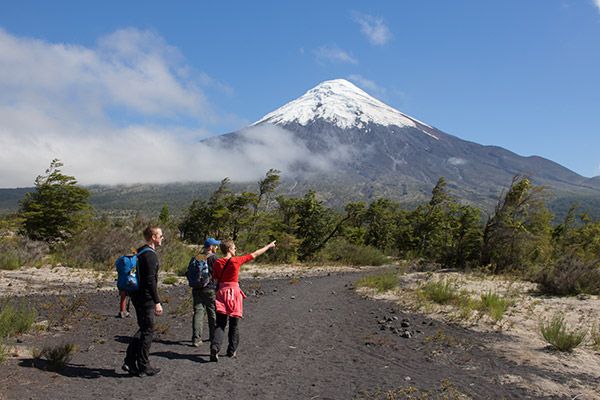 The path quickly lead into the dense rain forest, winding in and out of lush vegetation and affording amazing views of Osorno Volcano whenever our little group hit a clearing. Low clouds above moved through rapidly and changed the temperature by several degrees within seconds. As we hiked up the mountainside to an elevated lookout, the ceiling of clouds lifted revealing a perfect view of the sapphire lake and the emerald mountains beyond. 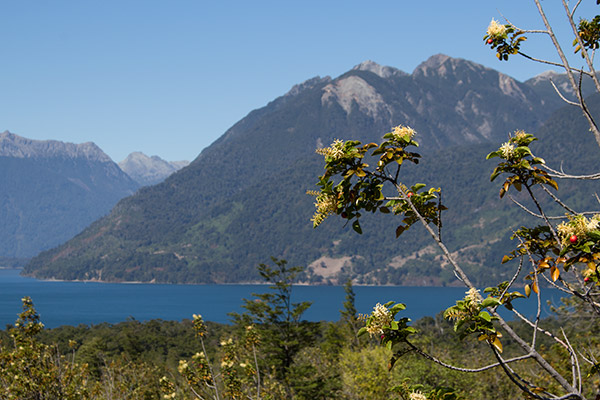 The landscape superficially resembles the area around Bariloche. But Chile’s Lake District, located on the western slopes of the Andes, receives a lot more rain. Tall ferns and dense undergrowth create a very different look. At times, it almost felt like the tropical jungles of Southeast Asia – minus the heat. 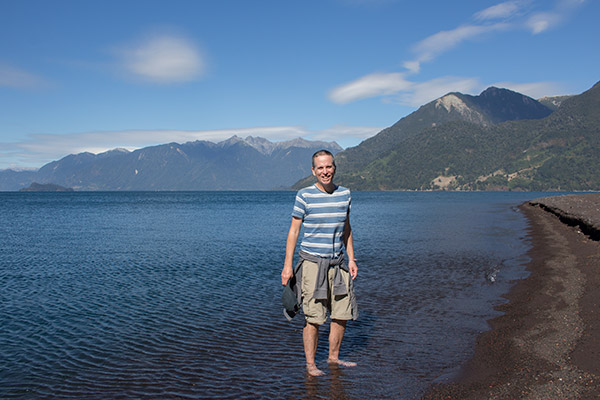 We continued down the path to the same beautiful bay where we had started. The crystal-clear water was not exactly tropical, but Tony dove in anyway – with his feet. We all followed his example and waded through the shallow wavelets on the warm volcanic sand all the way back to the bus. With nobody else around, this was definitely my favorite moment of the day. 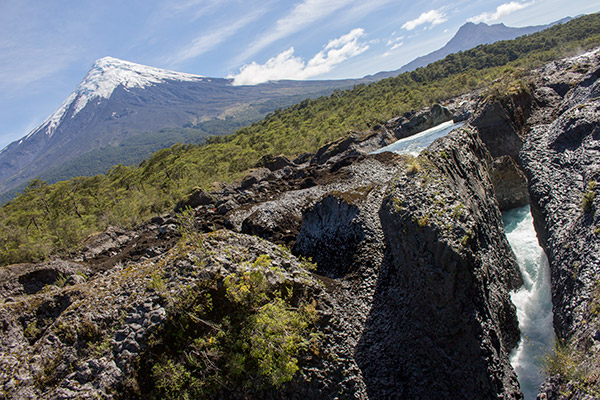 On our way back to Puerto Varas, we stopped at the Petrohué Waterfalls, a major tourist attraction and a popular destination for photographers. We had seen pictures of the frothing falls raging through a narrow canyon of porous volcanic rock. And the whole scene was backed by snow-covered Osorno Volcano. Clearly, this was only the case when the river ran high. During our visit, water levels were low, and that raging river had turned into a rather modest stream. The views from various points were still magnificent and definitely worth the US$2 entry ticket. 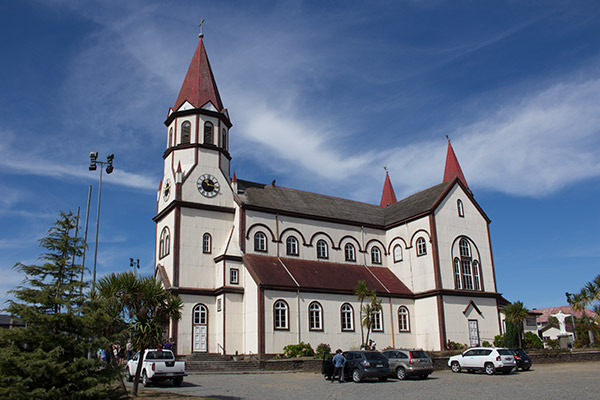 Upon returning to Puerto Varas, we strolled along the lakefront for the last time following the natural curve of the bay to a giant metal statue. The lanky lady with flowing metallic hair stretched out her arms as if to wave farewell. In the distance, behind the sculpture’s billowing hardware train, was Iglesia del Sagrado Corazón, a Black Forest-style church built a hundred years ago. It was exactly this juxtaposition of contemporary Chilean life and German cultural heritage which makes Puerto Varas so appealing and made this visit such a memorable experience. 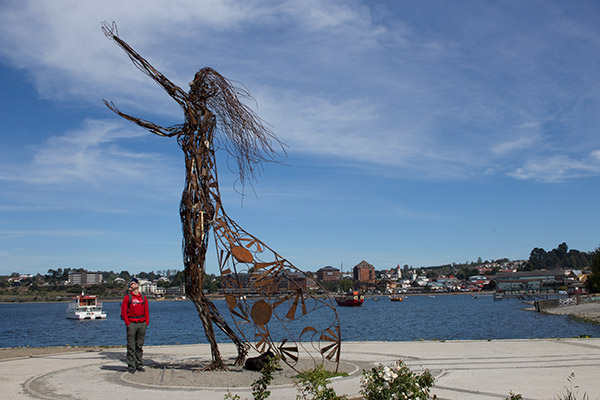 Thanks to the Guest House

We would like to thank the owners of the Guest House, Josefina and Willy, for hosting us during our time in Puerto Varas. The boutique B&B with nine guest rooms is a wonderful place to experience some of the town’s German history and meet other travelers. We absolutely enjoyed our stay and highly recommend it. 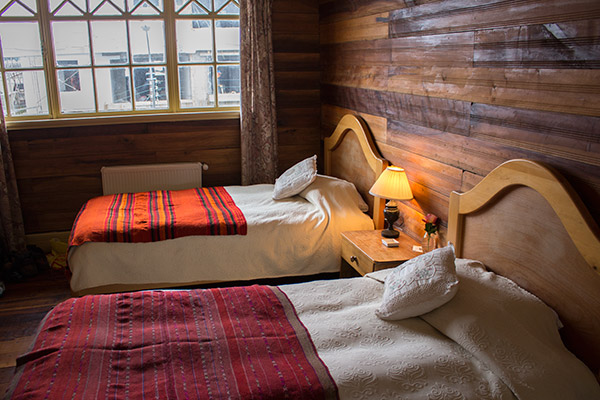 All the rooms are unique and come in various shapes and sizes. We appreciated our comfortable wood-paneled room on the second floor; it came with a panoramic window and its own bathroom. We also welcomed the free WiFi and the downstairs common area, one of the greatest features of the house. 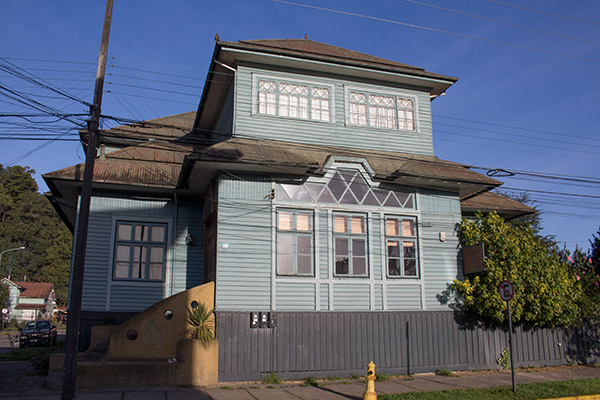 We particularly liked the large dining table where we had a chance to mingle with other guests and exchange travel-related tidbits. Breakfast was particularly fun, swapping traveler tales over a great selection of homemade jams, breads, cakes, cheeses, meats as well as yogurt, müsli, and fruit. Thanks again, Josefina and Willy, for your hospitality.

If you would like to find out more about the Guest House, inquire about room rates or make reservations, visit them at www.theguesthouse.cl/. 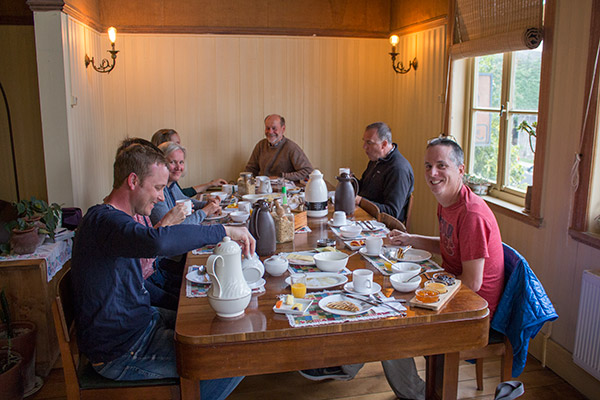 Disclosure: We were guests of the Guest House during our stay in Puerto Varas. However, all of the opinions expressed here are our own.