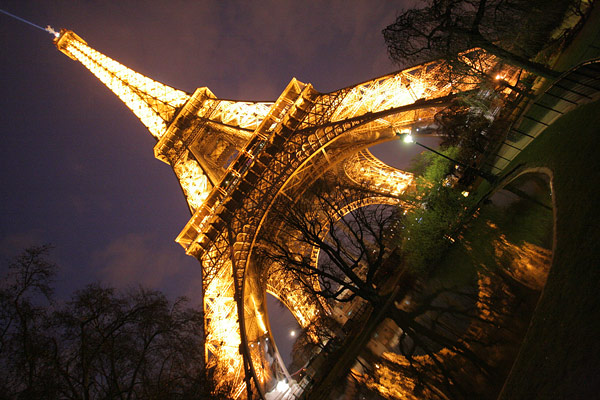 When you’re a travel blogger, you spend a lot time searching for new angles. Sometimes, you forget that you don’t have to turn every destination on its side; occasionally, you need to stop and embrace the classics. When my step-sister Joely asked if the trip to Paris was too conventional, too boring for us, I thought, “Oops, I think we need to do some serious blogger damage control.”

Travel is travel; we love it all. Not everything has to be an epic battle or a series of close calls – we’re not masochists. Beautiful architecture, great museums, and cafés full of desserts are as enjoyable to us as anyone (maybe more so because we’ve experienced all extremes.)

So in this post, we revel in our inner tourist and explain why we love the time-honored Parisian classics. The only angles you’ll find here are in the photography.

Stand beneath the great Eiffel Tower

You’ve got to take in the Eiffel Tower, right? I mean, could you possibly skip it? Well, we’ve actually met several travelers who have, insisting it is the ultimate tourist trap. But that’s a BIG mistake. 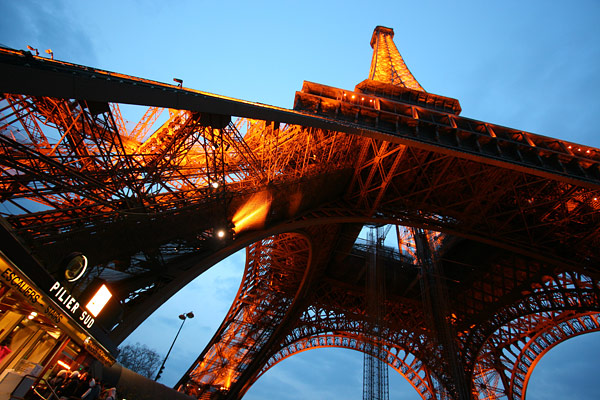 The Eiffel Tower is a 19th-century engineering marvel and a visionary steampunk masterpiece created by the ultimate travel junkie himself. Eiffel’s architectural jewels dot the globe from the General Post Office in Ho Chi Minh City to the Palácio de Ferro in Maputo to the Statue of Liberty in New York. World travelers, you can collect them all starting with the Eiffel Tower!

But one word of caution, if you want to climb the world’s most famous monument, you need to book tickets in advance or endure an equally monumental line with waits of up to five hours! This is Paris people, it’s popular. And make sure to catch the spectacular play of lights that takes place after dark.

Wander the streets of Montmartre

Montmartre has a reputation for being one of Paris’ most atmospheric neighborhoods with winding streets, cute cafés, outdoor markets, and one of Paris’ most architecturally unique churches, the Sacré-Cœur. It was also the historical playground of artistic greats from Dalí to Picasso. 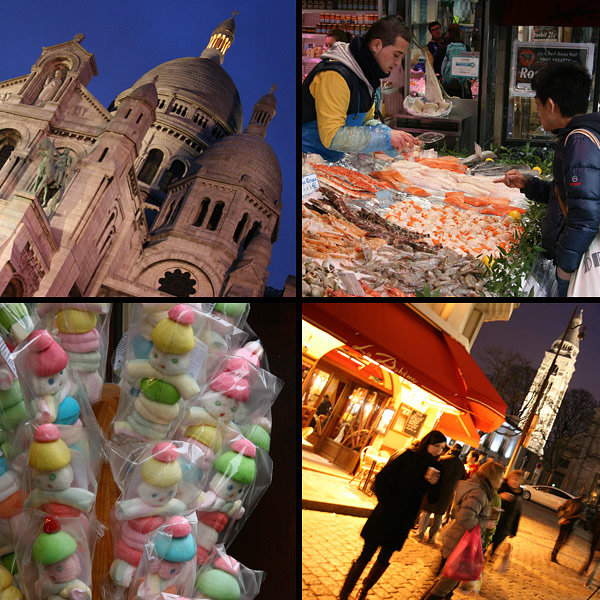 Although throngs of visitors and some serious tourist kitsch can overwhelm the tight streets around Place du Tertre, if you visit at night mid-week and strike out into the backstreets, you’ll quickly find what you came for. There’s tons to discover even for repeat visitors. Somehow, I had never noticed the Moulin de la Galette before, a second windmill just up the hill from the Moulin Rouge. It’s worth a visit to Montmartre for the views over Paris alone.

Shop the Galerie Lafayette and Printemps 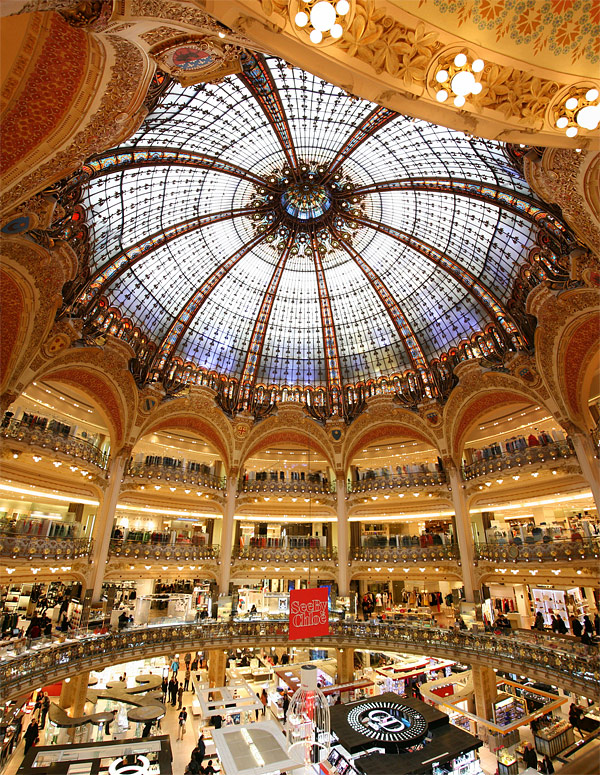 While most of the focus is on the Galerie Lafayette, don’t rush away without checking out the equally magnificent exterior of Printemps just down the street.

Spend the day (or night) at the Louvre

The Louvre contains one of the greatest collections (if not THE greatest collection) of art in the world. It is MASSIVE and somewhat overwhelming. Egyptian, Mesopotamian, Greek, Etruscan, Roman… you name it, they’ve got it. Actually, we intend to plant ourselves in Paris at some point and get an annual pass and see the whole thing. 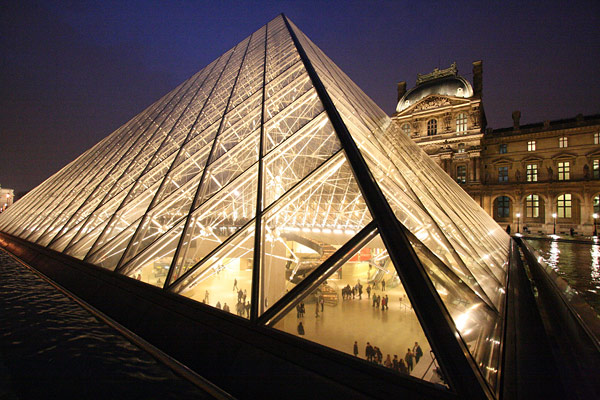 Even if you hate museums, stop by the Louvre when it is all lit up at night and take in the view. I.M. Pei’s glass pyramid backed by the Renaissance lines of the museum make for quite a sight.

Never underestimate the enjoyment factor of people-watching in Paris. There are some SERIOUS characters in this city. 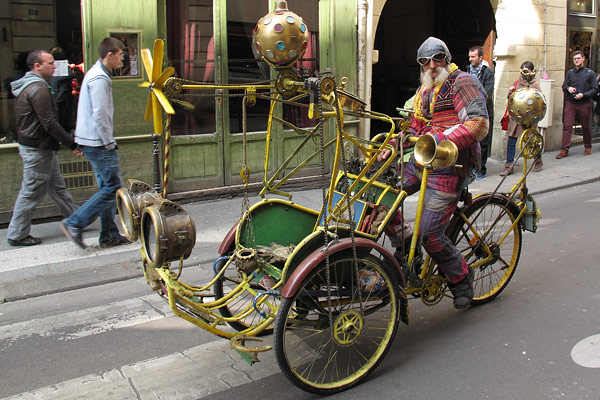 You can spend hours (I actually do) walking around, taking in every detail of the best known Gothic cathedral in Europe. The more you look, the more you notice. She may never tear me away from my true Gothic love, the Cathedral of Sienna, but she definitely causes my eyes to stray. 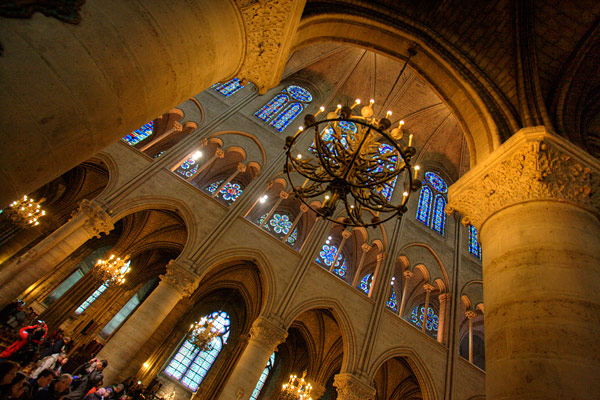 If you’ve never done it, take the time (and cough up the cash) to climb the bell tower and check out the grand dame from above. You’ll get great views over Île de la Cité and Notre Dame’s flying buttresses as well as that classic gargoyle shot on all the postcards.

I could easily blow a million dollars in this city just eating. (That’s at least three meals here, right?) Seriously, food is a major attraction. So much so, that we have devoted a separate post to that. But for now, here’s some food for the eyes. 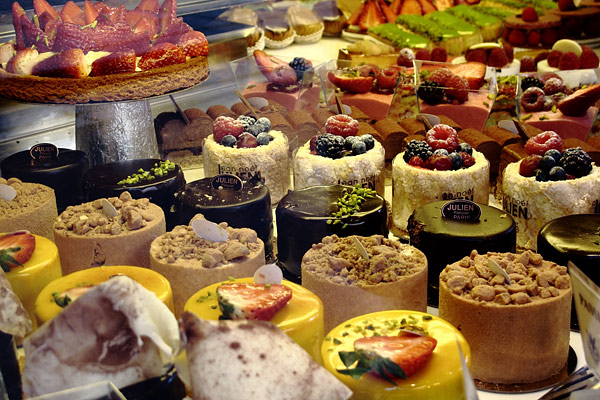 Stroll the Champs-Élysées to the Arc de Triomphe

Where else can you shop for a $50,000 dollar watch, sample the finest chocolate, hawk your house for a Louis Vuitton bag, and contemplate the dead from both world wars? (Oops, I slipped. I was supposed to set aside my bite for this post. So I’m human.) 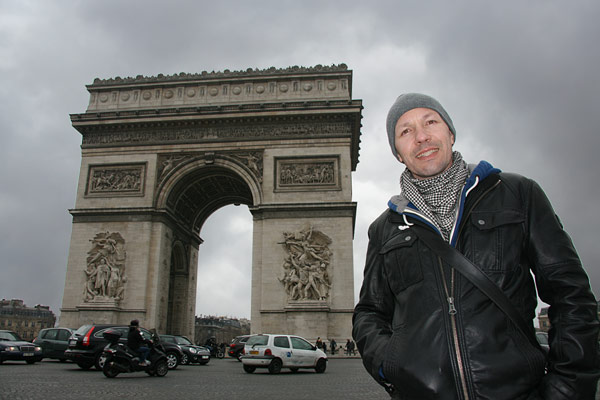 Speaking of contemplating death, don’t try (as some do) to run through the traffic on the Place de l’Étoile to get to the Arc de Triomphe. There are MUCH safer underground passages which will take you there. But do pause for a moment to simply watch the French drive – it’s an art form.

Explore the historic Quartier Latin and the Marais

The Quartier Latin and the Marais are two of Paris’ most famous districts. Both are perfect for getting lost, hanging out at a little corner café, and taking in the historical vibe. I enjoy wandering around both areas, but I especially love the Marais. It preserves some amazing finds such as the surviving Parisian half-timbered houses on Rue Francois Miron as well as bits of a 12th-century city wall on Rue Charlemagne. 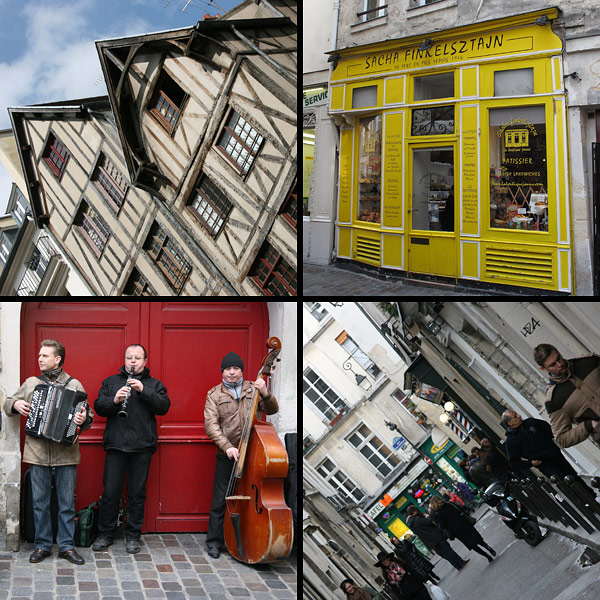 Beyond the historical vibe, where else in the world would the Orthodox Jewish center and the gay center be in the same place? You can hang out at a trendy gay club till dawn and then snack on gefilte fish at Sacha Finkelsztajn.

But this wouldn’t be a Tony and Thomas post without one bit of critique – and I think the French can handle it. With the overwhelming popularity of Paris and the huge number of people attracted to its monuments and neighborhoods, it’s time to ban tour groups or at least limit the number of people in a group. Sharing transportation is great, but the flow of people is horribly disrupted when a group of fifty clogs a door or a hallway while listening to their guide babble on about something they could easily read themselves. Just one critical thought to spice up my otherwise positive post. 😉