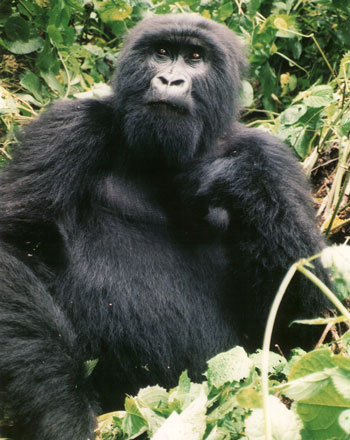 The year was 1994, Thomas and I were in Uganda halfway through an 18-month overland trip from Germany to South Africa and the genocidal atrocities sweeping across Rwanda were just coming to an end. Bodies were washing up along the shores of Lake Victoria and waves of refugees were streaming over the border into neighboring Zaire, one of the most dysfunctional countries in the world at the time. Bizarrely, that moment, as insanely dangerous as it was, would prove to be one of the safest and most stable periods to visit the Zairi Virungas for more than a decade to come.

Rwanda was off-limits for obvious reasons. Gorilla permits were extremely difficult to get in Uganda due to the fact that high-end safari companies, which were unable to to enter Rwanda and unwilling to enter Zaire, were buying up permits well in advance. This high demand saw Ugandan gorilla permit prices increase to $180 – a fortune in 1994. To put the price in perspective, Thomas and I together spent less than $180 on one month of travel through southern Ethiopia. 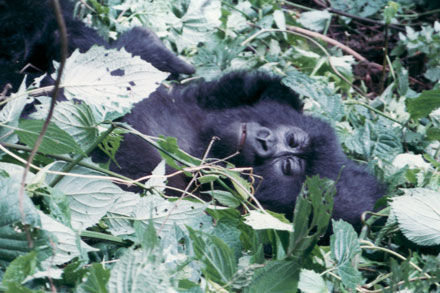 We decided to cross the border into Zaire and see the mountain gorillas there, not just because of permit problems in Uganda but also because I wanted to visit the area where Dian Fossey originally began her research before moving to Rwanda. Entering Zaire was a challenge to say the least. Visa costs were high, border guards were corrupt, and the entire transportation infrastructure had collapsed. Zaire was so broken that the currency system had completely fallen apart. Different villages had vastly different exchange rates if they accepted any paper currency at all. Children approached us attempting to trade million franc bills as souvenirs because the worthless notes  had gorillas on the back. The new currency was empty plastic water bottles, worth far more than money. 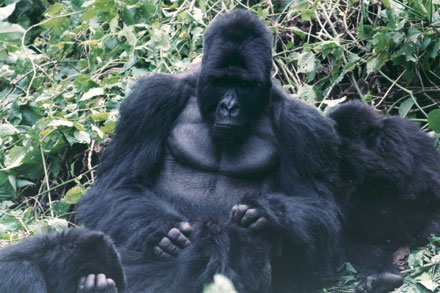 Since the transportation system had completely fallen apart, after crossing the border, we had no option but to start walking. We headed south along a system of rural trails to Djomba camp on the edge of the Virunga National Park. Upon arrival, we discovered a group of tourists on an overland truck tour heading west who had walked into Djomba while their guide continued the multi-day process of trying to bribe guards to get their truck over the border. (Even tours were harder back then.) To our dismay, the group had bought up all the gorilla permits for several days. Luckily, park guards told us about Bukima, a camp located ten miles walk further south. At that time, Bukima was not easily accessible by road and guards assured us that we would get gorilla permits there. 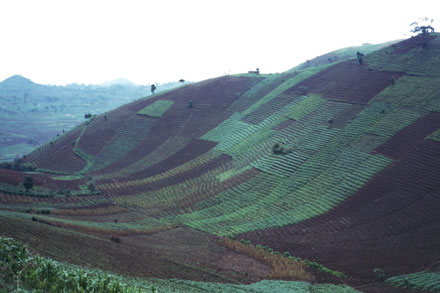 So we walked further south deeper into Zaire past isolated villages in the shadow of the spectacular Virunga range. Smoking Nyiragongo, a volcano which would eight years later erupt and devastate the nearby town of Goma, loomed before us. To the east, thick jungle marked the edge of the Virunga National Park. To the west, the surreal, combed fields of Zairi farmers spread as far as the eye could see. It was a mystical parallel universe which felt worlds away from urban centers like Nairobi. 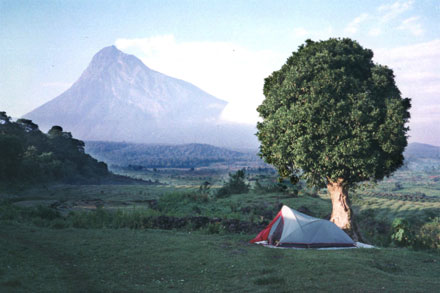 Bukima was quite isolated. There were no facilities other than a lone guard station and a well which we shared with a camp of hungry Rwandan refugees. The day we arrived, park guards shot a forest buffalo which had threatened a group hiking in the park. Within hours, the dead buffalo had been stripped of all its meat by the desperate refugees. It was a bizarre feeling to be paying so much money to view wildlife with survivors of genocide eking out an existence next to us. But it was also those very dollars that ensured the survival of the gorillas in one of the most chaotic, war-ravaged regions in the world. 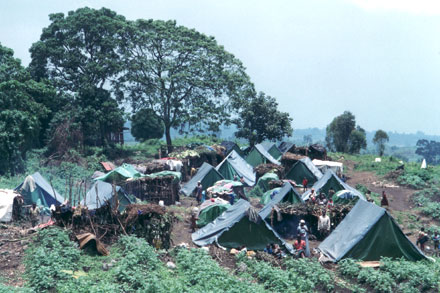 In such surreal conditions, we easily secured gorilla permits and early the next morning we set out into the densely forested park. Back then, Bukima’s trail system left a lot to be desired. And even if there had been good trails, I doubt the gorillas would have conveniently been sitting alongside them. We spent close to two hours scrambling over logs, pushing through thorny bushes, and forcing our bodies through a wall of foliage – not easy hiking. Despite the fact that we were covered in cuts and bruises, it was the most exhilarating thing I had ever done.

In the build-up to our gorilla experience, I had envisioned a dramatic first encounter with a silverback bursting out of the forest in a fit of mock-rage. In reality, it was somewhat less glamorous.

We came to an incline where the path took a steep downward plunge. The gorillas had torn up an anthill and a layer of enraged ants carpeted the very uneven jungle slope. Quite awkwardly, both Thomas and I slid down the incline picking up a coat of red ants in the process. 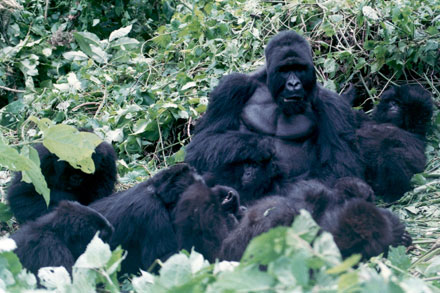 We spastically swatted and swiped at the ants trying to remove them from our skin only to look up and discover a curious female gorilla staring at us. Behind her, a huge group of gorillas – twenty in all – eyed us as they munched on leaves. We had the extraordinary opportunity to encounter one of the largest habituated groups of gorillas at that time, which included two large silverbacks.

When you spot your first gorilla, the clock starts ticking. Gorilla permits only allow you up to one hour with the group – and if they clearly want to move away from you, you are out of luck. In what just might amount to our most fortunate day on record, we were able to spend the entire hour sitting among the large group of gorillas watching them eat and groom. 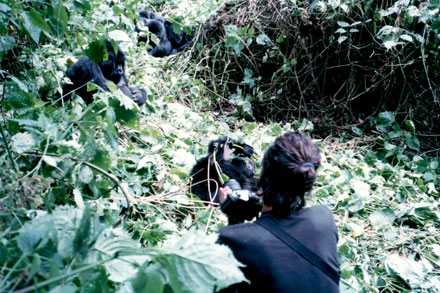 The scene was straight out of Gorillas in the Mist, babies climbed trees behind us and swung from flimsy branches collapsing with a thump back onto the ground. A huge silverback surged forward and pushed by us to explore the growth beyond. As instructed, we collapsed into a passive hunch to show respect for the mighty animal. It will always be one of the most exciting moments of my life. 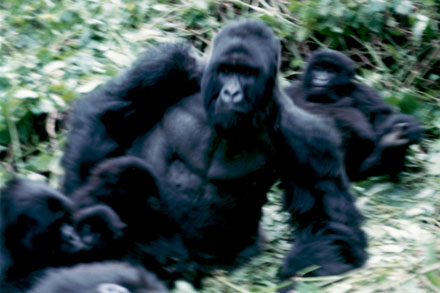 Wildlife enthusiasts might be shocked to see photos of us so close to the gorillas as current rules require visitors to stay around 7-10 meters away from the animals to prevent exposure to human-borne diseases. Remember that these photos were taken in 1994 when guidelines were quite different. At that point, there were no distance requirements although visitors were instructed not to touch gorillas. Gorillas, on the other hand, could do whatever they wanted and one did touch Thomas. A young gorilla approached curiously and pushed against his back as it moved down the path. Now that IS a once in a lifetime experience. 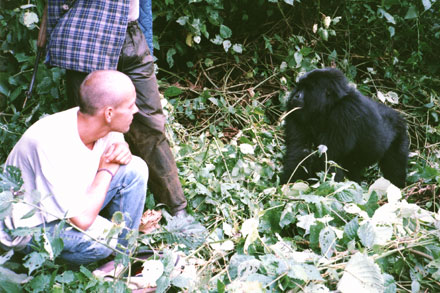 Since our visit to the mountain gorillas, permit prices have soared to $500 per person in Rwanda, Democratic Republic of Congo and Uganda. During the last couple of years, it was rumored that permit prices would increase to $1,000 in the near future.

In an bizarre twist of fate, just last month Uganda announced that, due to ongoing unrest in the country, they would lower the cost of their gorilla permits to $350 to encourage tourists to return to the country. Somewhere out there, there is a backpacker in Rwanda wondering if he (or she) should cross over into Uganda to see the mountain gorillas. Isn’t it ironic?