Memories of the Tsunami 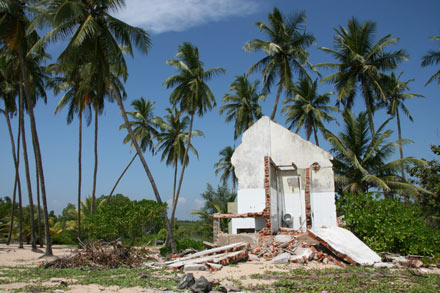 Wherever we go along the coast, Sri Lankans tell tales of their survival in the world’s worst natural disaster in living memory – the tsunami. Over 30,000 Sri Lankans were killed in the disaster. Here, the disaster lives on.

Even years after the giant wave struck the eastern and southern coasts of the country, visible signs of the destruction can be found on virtually every beach. Abandoned houses, huge boulders, missing vegetation, odd sand banks, the list goes on. The tsunami did an incredible amount of damage. But it’s the locals’ accounts of the tragedy that really bring the disaster to life.

In Mirissa, we met a hotel owner who had invested his life savings in a beach-side lodge, which he proudly opened two weeks before the tsunami swept his entire business away. He had constructed a restaurant with a huge arch entrance, the showcase for his lodge. Bizarrely, because of the unique entrance design, the wave passed right through the restaurant and the entire structure survived. Unfortunately, all his rooms were destroyed.

In Tangalle, the owners of our beautiful orange beach bungalow (see Hard Work) described how their sole guest at the time, an elderly German woman, had spotted the wave in the distance and climbed up their water tower just in time to watch the wave sweep over the coast carrying the surrounding buildings and people into the Mangrove swamps.

The owner’s friend, who didn’t make it to the tower, was caught in the wave and dragged under water through the Mangroves pounding him against the trees, breaking his arms and legs, and smashing his teeth out of his mouth. They found him a half a mile away from the coast. He survived.

In Hikkaduwa, a man hobbled up to me and pointed to a nearby bridge. “I saw the first wave hit,” he started casually, “so I ran up on to the bridge. When the second giant wave hit, it swept me and many other people off and carried us into the forest.”

He pulled up his sarong and showed me his legs to illustrate as he continued, “The waves were full of boulders that killed many of the people, they crushed my legs.” His legs looked like they had been glued back together, but at least he could still walk.

“This is where the wave hit the train. One thousand people were killed up there.” He pointed down the tracks into the distance. I suddenly realized that I was waiting for the notorious Sri Lankan train that had been so vividly covered during the disaster. It had never occurred to me.

One of the strangest sites we came across is in the picture above. It was a lone urinal on an isolated stretch of beach east of Tangalle. I’m assuming it was part of a hotel, but there was no hint of the rest of the buildings. Everything had been carried away into the wetlands. Somehow, it seemed to so perfectly convey the incredible power of the waves and, at the same time, the randomness of the destruction.