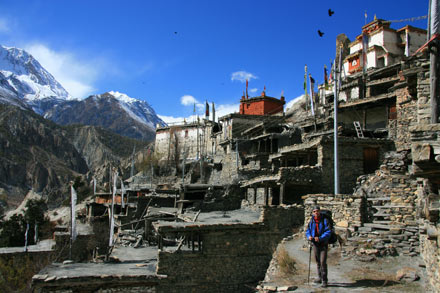 The second leg of the Annapurna circuit is a spectacular 5-day stretch across the Manang Valley. This portion of the circuit begins as you walk out of the narrow canyons of the Marsyangdi River moving from the villages of Gurung people to the Manangis, an ethnic group related to Tibetans. 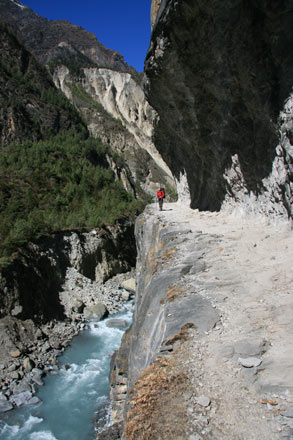 Exiting the canyons, you climb quickly through lush pine forests past the remarkable Paungi Danda, a solid wave of stone that sweeps upwards over 1200 m (3,960 feet). This geological wonder, which is of great religious importance to Hindus, is visible for several days from various viewpoints across the valley. 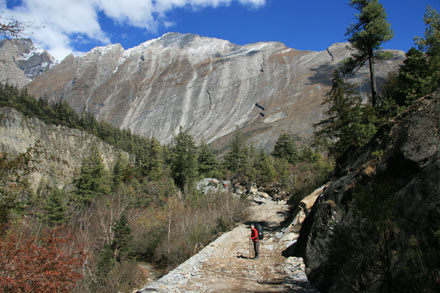 In addition to the Paungi Danda, highlights of this stretch include beautifully preserved Manangi villages, alpine lakes, Buddhist monasteries, ruined fortresses, and the incredible views over the Annapurna range and other Himalayan peaks. Peaks seen during this stretch include: Lamjung Himal, Annapurna 2, Annapurna 3, Annapurna 4, Gangapurna, Tilcho, the Great Barrier, and Manaslu (the world’s eighth tallest mountain.) 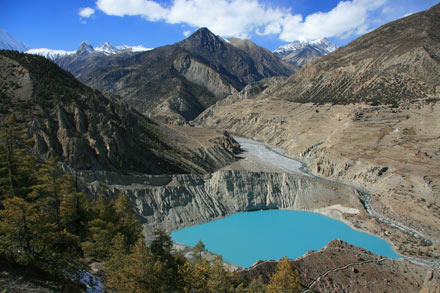 Thomas and I chose to take the extended high trail to Manang, which increased the length of our trip by a day and required us to do a lot of extra climbing; however, the views along this section of the path were absolutely unbeatable. On two occasions, while sitting in our guest house in the village of Upper Pisang, sudden rumbling alerted us to huge avalanches on Annapurna 2. The trekkers and locals rushed out to watch the spectacular fall of ice and snow as it rushed down the side of the peak. At a very safe distance, we were able to sit back and appreciate the magnificent sight. This valley is one of the most beautiful places we have visited in the Himalayas. 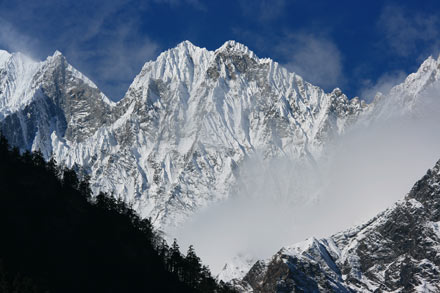 Strangely, after 30 years of trekkers walking through Manangi villages, they seemed to be bizarrely well preserved. It’s a huge testament to the village councils in Manang that they have prevented most of the garbage construction that curses many of the world’s tourist destinations. There must have been tremendous pressure on these traditional villages over the last three decades, yet they have come through brilliantly. Let’s here it for the Manangis!!! 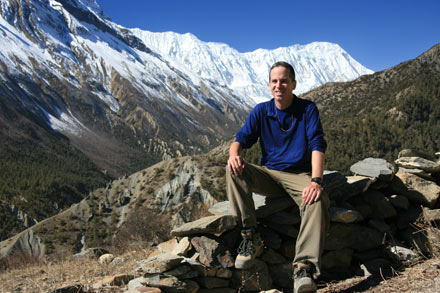