Machu Picchu is spectacular… so spectacular that we needed to visit the super-monument twice. The first time was in July during a visit by friends Lisa and Garrett, who pop up on this blog once or twice a year. The second time was the last day of our incredible Salkantay Lodge Trek with Mountain Lodges of Peru.

In some ways, it almost feels ridiculous writing about one of the most photographed and documented places on the planet. Volumes have been written about how beautiful and mysterious the site is. Article after article invokes images of “the lost city of the Incas,”  which was never really all that lost. (Locals living in the area knew it was here.) So what is there to write? Can Thomas and I really add anything that hasn’t been said a thousand times? Perhaps.

One thing we can say about the monument, which has been declared a UNESCO World Heritage Site and voted one of the New World Wonders, is that the archeological site is even more beautiful than pictures can easily represent. That’s not true for every world-famous location. 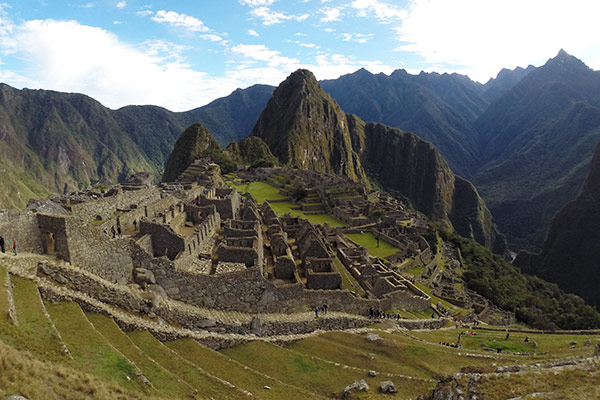 The classic shot over the 600-year-old ruins backed by the pyramidal peak of Huayna Picchu is certainly gorgeous. But no photograph (even 360 panoramas) can truly capture the deep valleys that plunge down beyond the terraced mountain slopes. It’s also quite hard to convey the scale, color and depth of the surrounding jungle-covered mountains. The landscape is unlike anything we’ve ever seen in other parts of the world. It’s really the natural setting that makes the monument so unique. 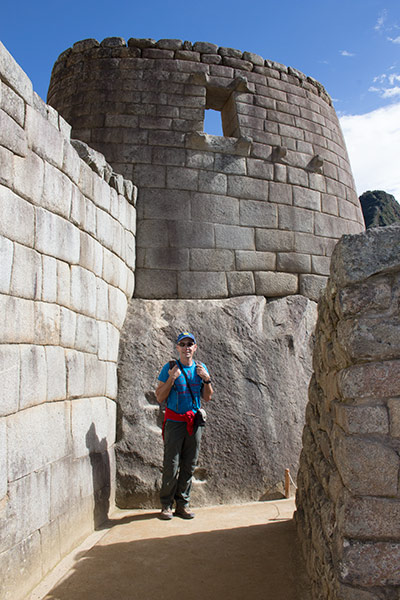 It’s true that Inca architecture is less obviously spectacular than the constructions of Mesoamerica or ancient Egypt – but it IS very special. Machu Picchu requires movement and exploration to fully comprehend the full extent of its beauty. Winding through the narrow streets and alleys of the ruined city, descending the massive stone staircases, and exploring the stone dwellings and temples brings the site into focus. You have to walk along the gargantuan walls examining the perfection of the jigsaw masonry. As in Cusco and Sacsawayman, the artistry is represented in perfect seams between incomprehensibly large stone blocks rather than wall paintings or sculpture. Those blocks also add an air of mystery. Like the stone circles of Britain or the mammoth Neolithic temples of Malta, it seems impossible for ancient cultures to have moved such enormous pieces of stone. How did they do it? 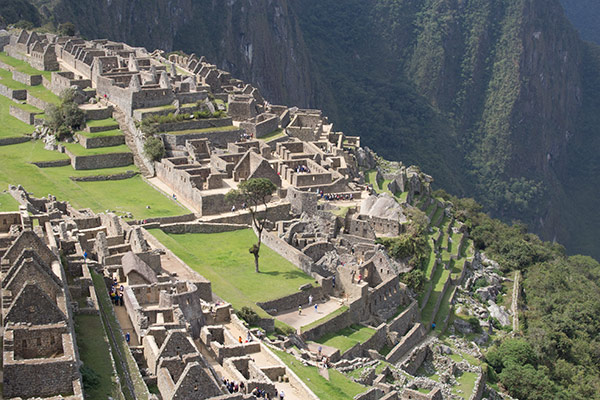 Many of the structures like the Inti Watana, the Temple of the Sun, and the Royal Tomb can feel quite abstract at first, but the more you move through the site, the more you begin to understand the Incan aesthetic. Our Mountain Lodges of Peru guide Whilder helped us understand the subtle beauty of Inca construction. Huge pieces of stone were considered beautiful, and natural forms were often preferred to artificial forms. The shape of the stone and of the land itself WAS art. Large boulders were often left in place and were thought to have spiritual meaning. Architecture, roads, and terracing hugged the shape of the land. In some ways, it feels like native American art and architecture in its purest form. 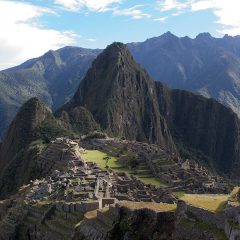 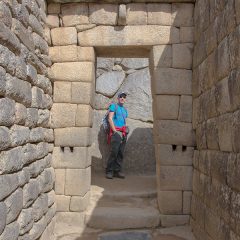 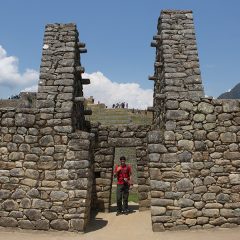 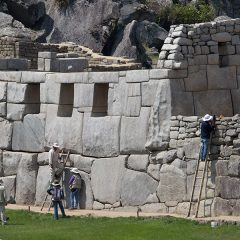 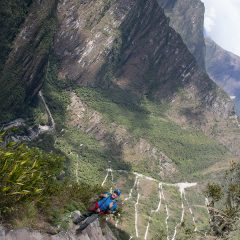 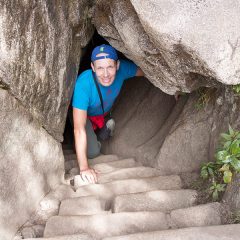 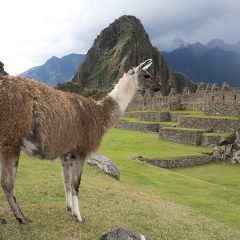 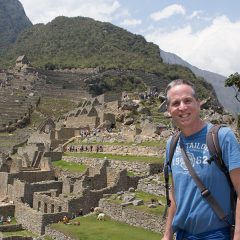 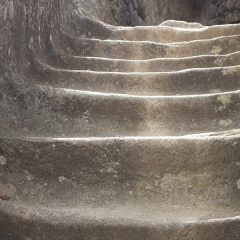 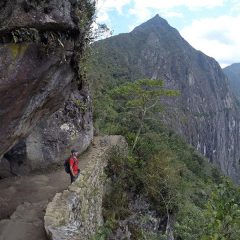 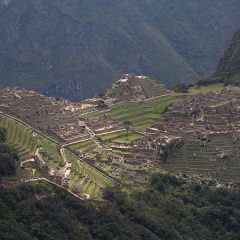 The central ruins are the focal point of most tours, but to really appreciate Machu Picchu you need to get out and hike to the view points. With Lisa and Garrett, we hiked the precipitous path up to the top of towering Huayna Picchu which boasts a stone fortress and sky-high views over the entire archeological park. You are so high up that Machu Picchu appears to be a tiny, insignificant afterthought on the plunging slopes. The steep, exposed staircase down the back of Huayna Picchu is an adventure in itself. 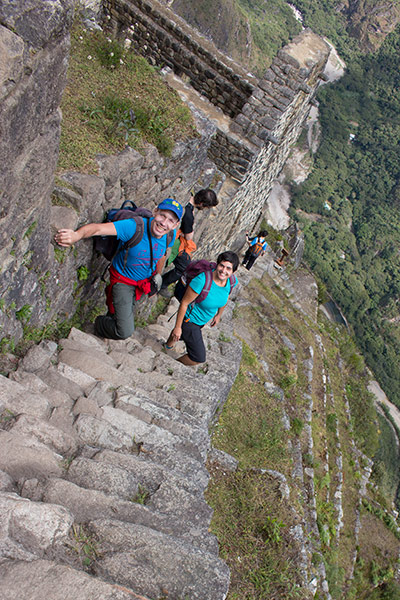 On our second trip to Machu Picchu, we hiked up to the Sun Gate to take in the exceptional views over the eastern side of the ruins as well as the zigzag road that leads up from Aguas Calientes. We also did a second side trip to the famous Inca Bridge which clings to a sheer cliff on the western side of the monument. The gorgeous cobbled path leading out to the bridge features vertigo-inducing sheer stone walls. It feels like something out of The Lord of the Rings – definitely try not to miss it. 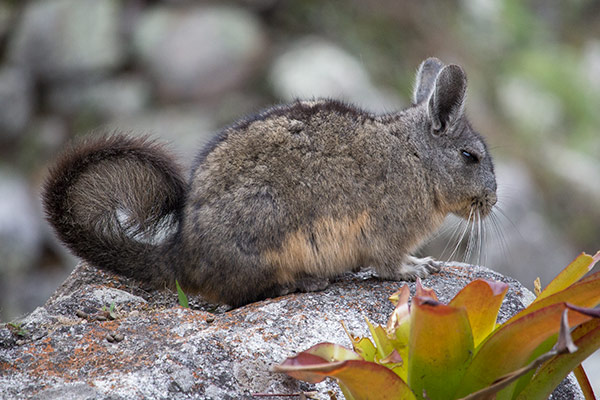 It’s easy to rush around the ruins trying to see everything. Or to be so focused on historical explanations or guidebook maps that you forget to just look at the grandeur. Take a moment to watch the llamas grazing on the Central Plaza. Hike up to the classic view point near the Hut of the Caretaker of the Funerary Rock, find a stretch of stone terrace to call your own and just take it all in. The sight of the stone temples, dwellings and terraces spilling down the steep cliffs is breathtaking. It really is one of the most beautiful monuments in the world. 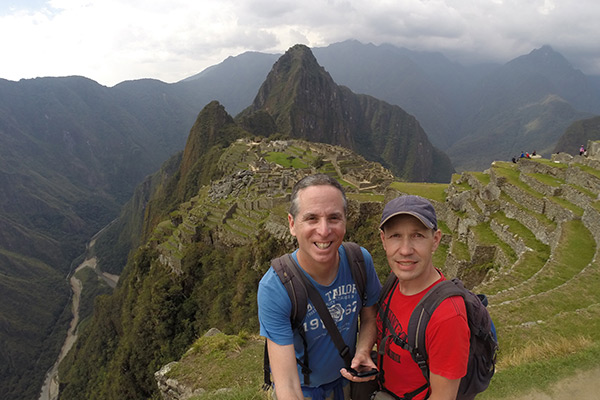 Yes, Machu Picchu is stunning. But all this beauty combined with enormous media coverage and touristic promotion means that this New World Wonder is – putting it quite bluntly – overwhelmed. In 2011, the Peruvian government limited the number of visitors to Machu Picchu to 2,500 per day. The popular climb up Huayna Picchu is limited to only 400 people a day. The climb up Machu Picchu Mountain behind the ruins is similarly limited. In other words, this is not a monument where you just show up last minute and expect to do whatever you want.

Due to the damage caused by such large numbers of people moving through the monument, it’s also a real question how long Machu Picchu will remain this accessible. I’m afraid at some point, it may go the way of Chichen Itza and completely block entry to the ruined buildings. That would be a real loss; it’s just not the same walking along ruins looking at them from behind a barrier. I would suggest that if you have your heart set on exploring Machu Picchu, you get there as soon as possible. 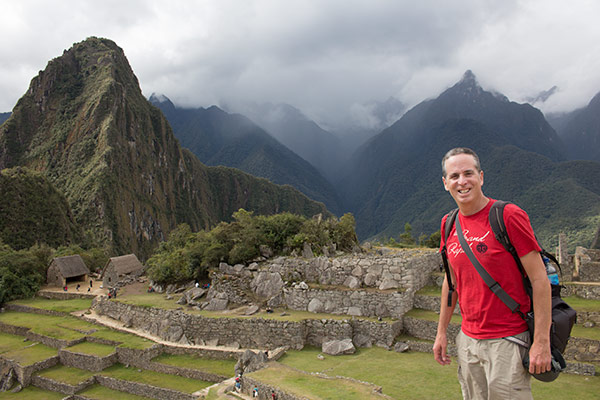 Disclosure: For our second trip to Machu Picchu, we were guests of Mountain Lodges of Peru. However, all of the opinions expressed here are our own. It’s Machu Picchu, people, of course we love it.