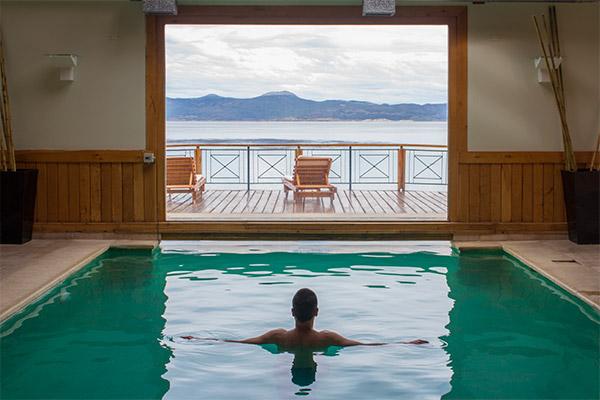 Thomas and I were sitting in the dining room on the Via Australis chatting over breakfast with Milton, a surgeon from Brazil, when the steward suddenly appeared at our table and announced, “Sirs, your driver is here to take you to Los Cauquenes Hotel.”

Yes, after a cruise to Antarctica and a second cruise through the islands of Tierra del Fuego, a traveler needs a bit of luxurious rest and relaxation, right? Are we overindulging? 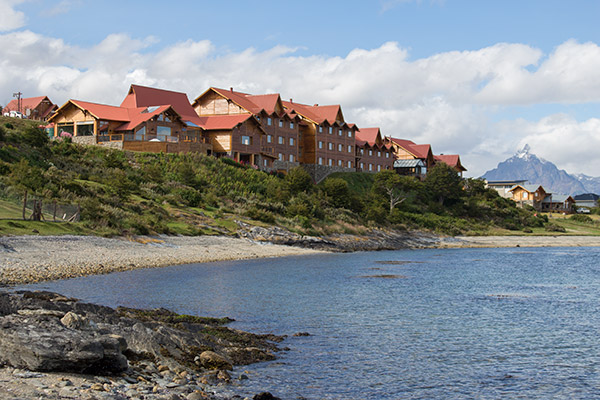 Los Cauquenes Resort & Spa is situated on the Beagle Channel outside Ushuaia overlooking a beautiful pebble beach with the mountainous islands of southern Patagonia in the distance. Everything in the resort is about windows: rooms, lounges, the spa, the dining room and decks all look out over the channel celebrating the gorgeous setting. You don’t really need to move much to enjoy Patagonia here – which was just fine with us. We reveled in the idea of just hanging out and relaxing in the spa before starting our very long and potentially arduous journey across Patagonia. 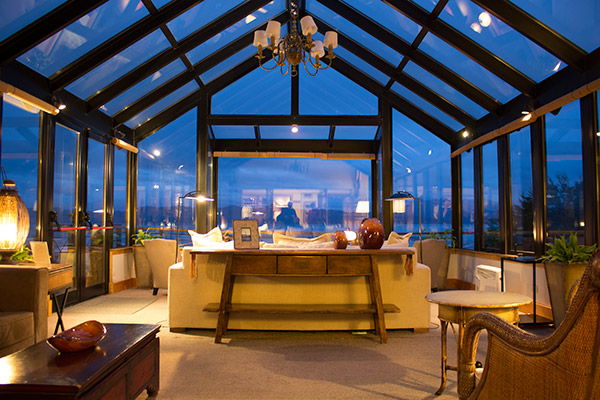 As we entered the hotel, super friendly Florencia at the reception welcomed us and confirmed our little locomotive adventure to come. Our room featured broad windows with great views of the hotel’s cove backed by verdant green hills and snow-capped peaks in the distance. As I glanced out at the water, I thought I caught sight of a dolphin in the channel… but we would later discover it wasn’t. 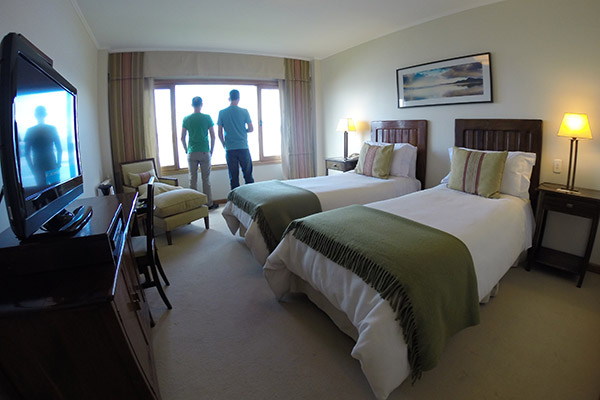 Almost immediately, Thomas and I made a beeline for the spa and hopped into the jacuzzi. Antarctica and Tierra del Fuego are beautiful destinations, but they are both – to be quite blunt – cold. The grey skies outside also made us want to hide away in the resort to escape the drizzle. A bubbling jacuzzi was just what the chill doctor ordered. The spa also had a sauna, a workout room, massage rooms, and a heated indoor pool which extended a bit outdoors. (I always love indoor pools where you can dive under a wall and surface outdoors – it makes me feel like I’m a villain in a James Bond movie.) 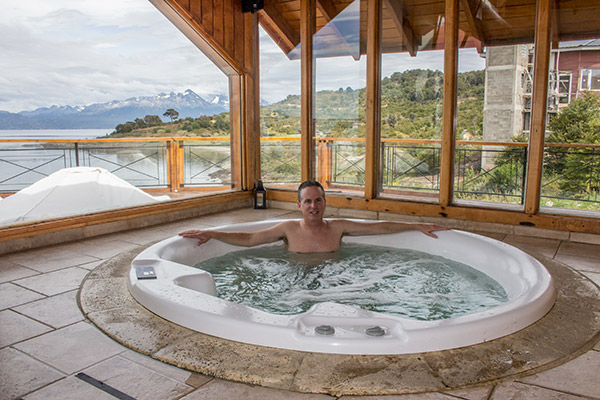 We lazed and luxuriated, soaked and steamed for the following day. With our travel schedule, we rarely just do nothing. We strolled along the pebble beach and stared at the insanely beautiful lupine flowers planted around the hotel. Sometimes, doing nothing is the best thing to do. Taking a moment to stop and smell the flowers was definitely necessary to kick-start our travel brains and get us ready for our next adventures. 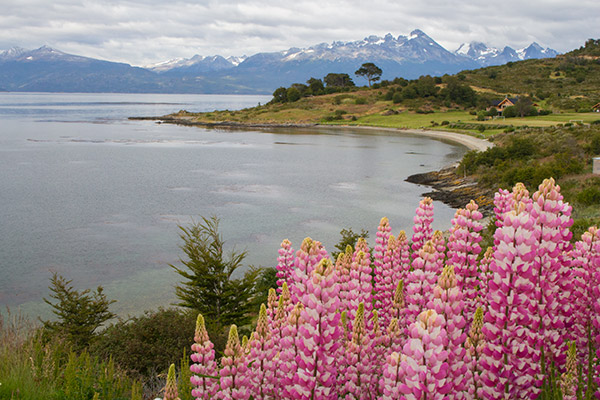 Los Cauquenes offers a variety of different excursions from outings on the Beagle Channel to visits to Estancia Harberton. And while we were reluctant to crawl out of the jacuzzi and reemerge into the outside world, we decided our job as travel bloggers required us to do a bit more than sit in the spa. Since we had been living on boats for the last two weeks, we opted for something a bit different: we chose a trip on the End of the World Train to Tierra del Fuego National Park. 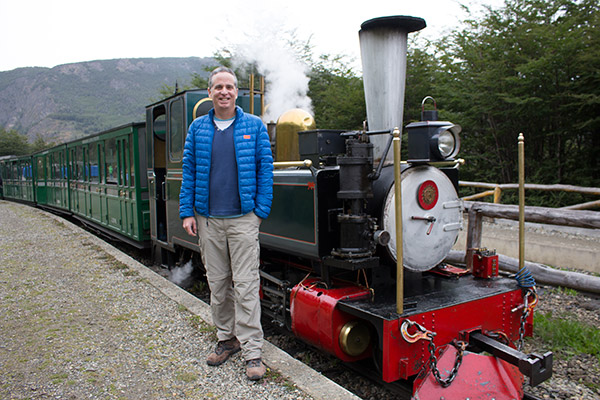 The Southern Fuegian Railway, also known as the End of the World Train, is the southernmost functioning railway in the world. (“Southernmost” is a big concept around here.) Originally built when Ushuaia was a penal colony, the railway was used to transport timber while constructing the town’s prison and later to transport firewood. Today, the train runs on an extremely narrow-gauge 500 mm (19 3/4 in) rail. How you react to the train will probably depend on your interests, how much disposable income you have, and your sense of humor. 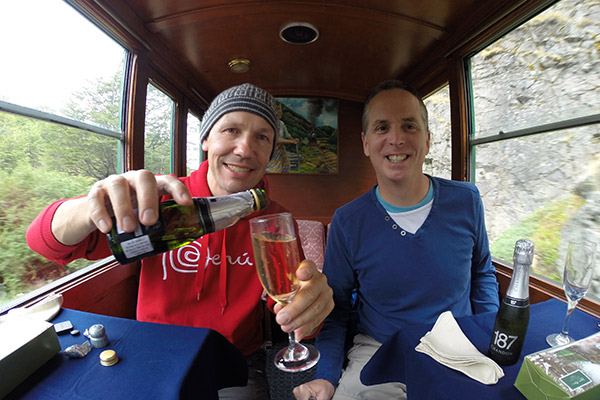 In some ways, the current incarnation of the Southern Fuegian Railway feels a bit like a slightly upscale ride at Disneyland. Tourist class passengers were packed into the tiny cars like sardines. Thomas and I rode in the first class, which seated one passenger on each side of the aisle and played up the experience a bit with sandwiches, alfajores and champagne. The train departed from the End of the World Station outside Ushuaia and followed a short, seven-kilometer (4.2 mile) track along the Pipo River. The route took us past beautiful pastures filled with foraging cauquenes, otherwise known as kelp geese, to the Tierra del Fuego National Park. Along the way, the train stopped for passengers to walk to the very small La Macarena Waterfall and snap some shots of horses grazing in the meadows. 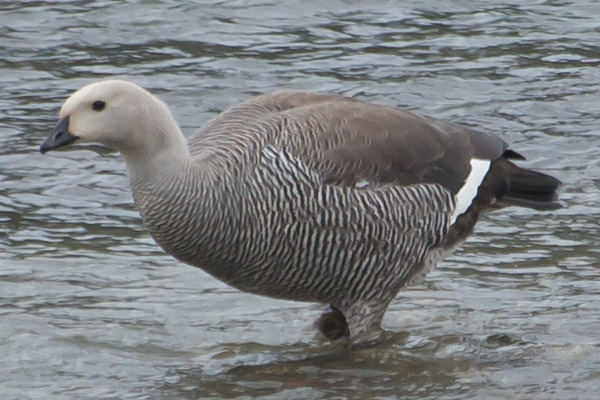 Our ride on the End of the World train was pleasant enough, but several people we talked to found the experience overpriced and underwhelming. We do think serious train junkies will appreciate the narrow gauge, the history, and the fact that they are traveling on “the world’s southernmost train.” As for Thomas and me, we both found the experience to be somewhat of a comical, enjoyable indulgence. We were both cracking up sipping champagne in our child-sized seats as some hikers walking along the track actually passed by the moving train. Hilarious. 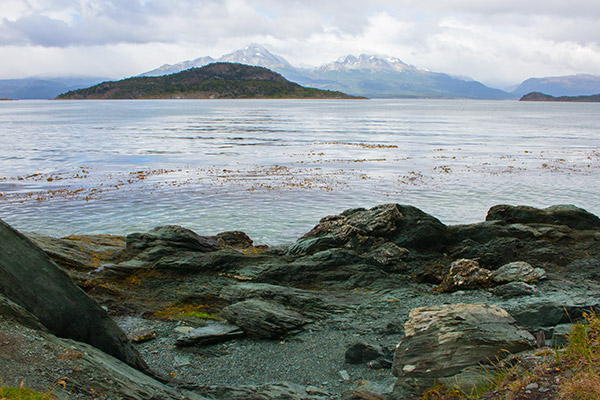 While the train may receive mixed reviews, we are fairly confident that most visitors will love the train’s destination, Tierra del Fuego National Park. Our extremely professional guide Isabel, provided by Los Cauquenes Hotel, spent the afternoon showing us a few of the highlights. We started with a short walk along a coastal trail at Ensenada leading through stretches of Tierra del Fuego’s beautiful subpolar forests. The trail also passed some extraordinary shoreline of forest-green boulders. Once or twice, the sun emerged from the clouds and illuminated the greenish rock and the crystal-clear water producing quite a magical scene. If we had it to do over again, we probably would have skipped the train and spent the whole day hiking along this stretch of coast. 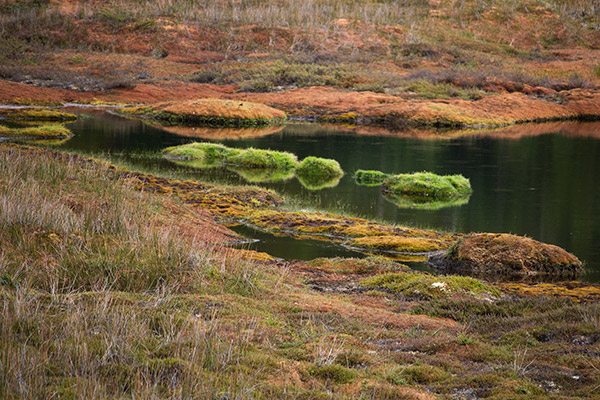 After our short hike, we were driven through a vibrant landscape of shifting autumn colors to Bahia Lapataia to take in the views of the famous bay and enjoy its remarkable birdlife including cauquenes, southern crested cara caras, spectacled ducks and black-faced ibis. We also celebrated the fact that we had literally hit the “end of the road.” Overland drivers all revel in reaching Lapataia because this is basically as far south as you can drive in South America. Beyond its natural and geographical attractions, Bahia Lapataia offers up a bit of historical significance as well. The area is packed with unexcavated Yaghan tribal shell mounds. (Basically, this is where they dumped their trash after their seafood feasts.) After exploring the site, we did a short walk at Lago Roca, a scenic lake split between Argentina and Chile. Tierra del Fuego National Park is an excellent outing from Ushuaia and, for most people, this will be their best option for discovering a bit of the region’s unique flora and fauna. 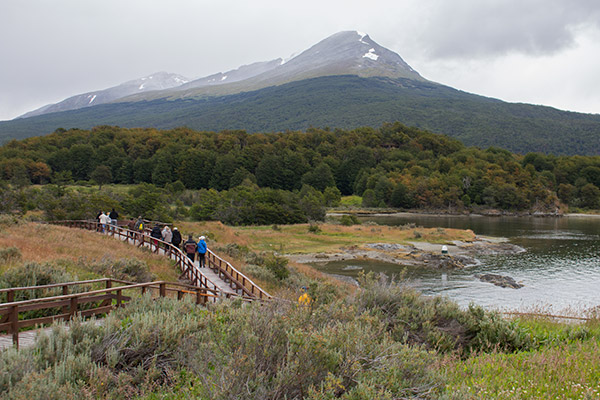 Back at Los Cauquenes Hotel, we decided to finish up the day at the hotel’s fabulous restaurant Reinamora. As we were being seated, I was reflexively scanning the Beagle Channel for wildlife. All of a sudden, I spotted that dorsal fin that I had mistaken for a dolphin, but this time I realized it was far too big. I ran to our room, grabbed my binoculars, and raced back into the restaurant. The British couple seated at the table next to us, who we would later discover were named Jane and Allan, had their binoculars out as well.

“I do think that’s a whale,” announced Jane with the thrilled yet analytical tone reserved for entomologists, bird watchers and British travelers.

I peered through my binoculars and confirmed that it was a minke whale; we had seen them while we were in Antarctica. When the curious waiters asked what we were looking at, it took us several tries to explain we had spotted a whale. They kept telling us that there were no whales in the bay, but apparently the whale didn’t know that. A few translations and passing around the binoculars confirmed that spotting a whale from the restaurant was not a daily occurrence. Everyone, including the waiters, were quite excited by the wayward minke. 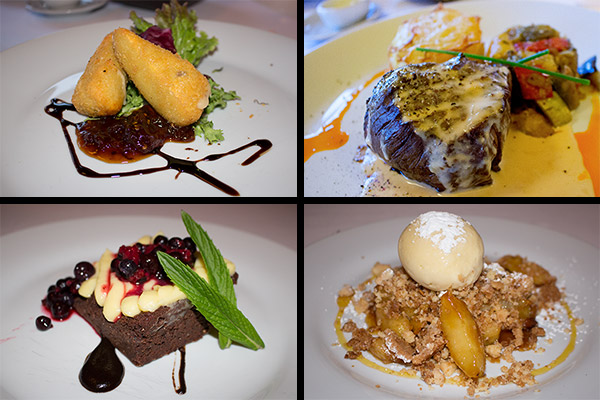 Just about the time the whale excitement started to die down, our meal began. We started with brie crocante with thyme confiture and scallops au gratin. Both dishes were absolutely delicious. For our mains, Thomas went local with a Tierra del Fuego lamb ragout, and I opted for more general Argentinian fare with veal tenderloin flavored sweet garlic and bay leaves. Again, both dishes were outstanding. I have to point out that Argentinians really do know how to prepare meat. My tenderloin, which I ordered rare, was absolutely perfect. For dessert, Thomas chose wet chocolate cake and I had apple crumble with Baileys ice cream. That apple crumble was literally one of the best desserts I have ever eaten in my life (in the interest of full disclosure, I worship Baileys Irish Cream.) 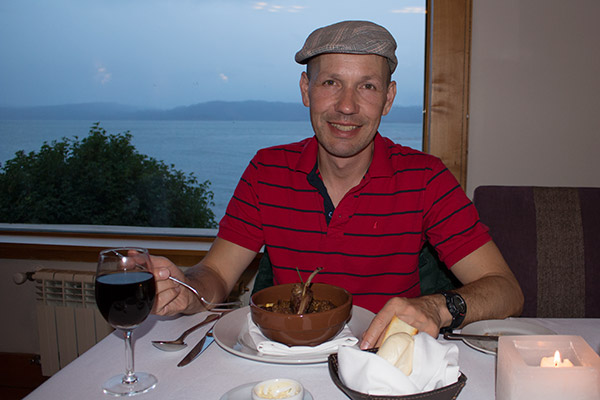 For regular readers who fear that we have totally gone soft, that was certainly true during this stay… and we are proud to admit that. Sometimes, you need to kick back, luxuriate a bit, hang out in the jacuzzi, and eat fine food. Sometimes, adventure is staring out a window at a world-class view or sitting on a pebble beach contemplating the edge of the world. Our blog is about experiences, and Los Cauquenes was definitely a wonderful way to experience the region.

Disclosure: We were guests of Los Cauquenes Resort & Spa during this stay in Ushuaia. However, all of the opinions expressed here are our own.