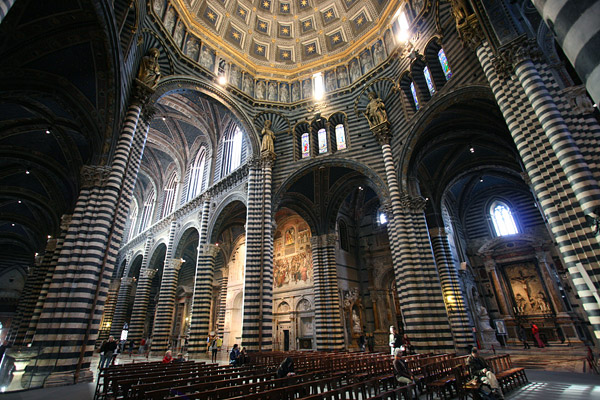 Once upon a time, cities were built with a sense of fantasy. Crazy rulers would throw out an idea like, “Hey, I know, let’s build the city square in the shape of a giant clam shell. We’ll divide the shell into nine sections where the city’s rival clans can sit. Oh yeah, and we’ll construct a race track around it where horsemen representing those rival clans can compete.”

Siena is medieval madness at its very best. Not only did that clam-shell race track become a reality, the entire city is one huge example of Gothic magnificence. Even today, the city is still fully surrounded by one of Europe’s few surviving true city walls (as opposed to a village wall). While that distinction may sound abstract at first, the scale of the city gates make the difference quite clear. 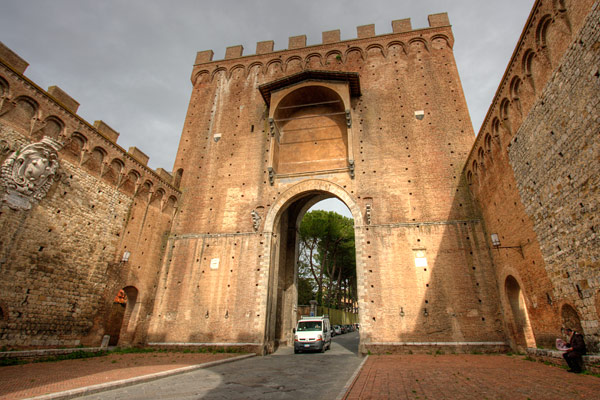 Within those gates, the hill town becomes a wonderfully convoluted maze of buttressed walls, arched fly-overs, fortified towers, palaces, and churches. With urban vision WAY ahead of other European cities, Siena began limiting automobile traffic within the old town in 1966. (Was it vision or did they get tired of cars hydroplaning down those steep stone roads smashing into peoples’ homes?) Either way, the lack of traffic makes wandering through town a pure joy. 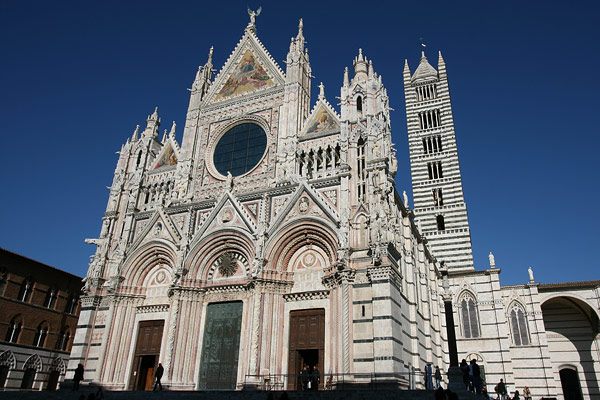 The highlight of Siena, and my prime reason for coming here, is the city’s remarkable Gothic cathedral. Considered one of Italy’s (and therefore Europe’s) most spectacular constructions, the church has to be seen to be fully understood. Like the cathedrals in Pisa, Florence and Orvieto, the church pops with that distinctive black and white striping. The facade is overloaded with detail including elaborately carved columns, statues of philosophers and prophets, and stunning gold mosaics. 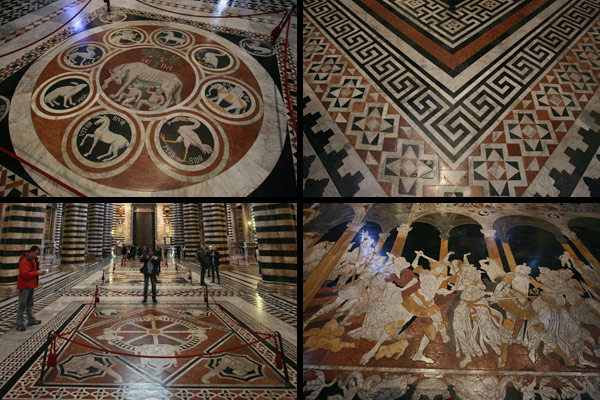 But it’s the interior that really makes visitors gasp in awe. Your first thought is likely to be, could Liberace have been a Gothic architect in a past life? It’s so over-the-top – in a good way – that even the most churched-out visitor should snap out of their architectural stupor. Initially, I just stood there at the entrance transfixed by the cathedral’s striking inlaid marble floors, some of the most famous in Italy. In the background, an annoyingly nasal voice proudly announced to her entourage, “Rick Steves says the cathedral is as Baroque as Gothic gets.” The group nervously nodded in vacuous agreement. As they moved away, I heard one girl say, “Baroque? I thought that was… ooh, look at the blue ceiling. It has gold stars!!!” 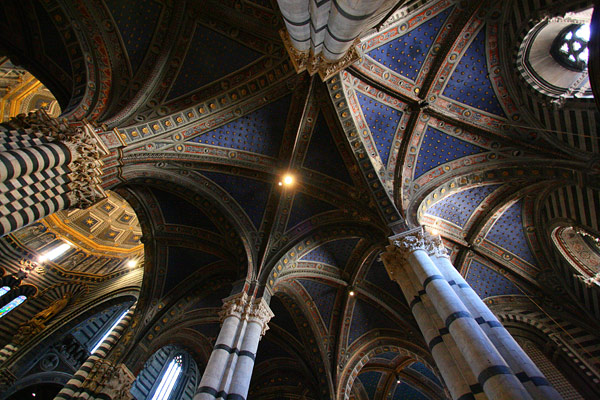 The cathedral is definitely an awe-inspiring sight. When I noticed several “No photography” signs, I almost had a mental breakdown. I glanced around to discover at least 12 people composing pictures at that very moment. I walked further in, still resisting temptation, past four more “No photography” signs. Literally every single person around me was taking pictures. I battled with that little moral voice within. Suddenly, I spotted my first “No flashes” sign. That was all the permission I needed. 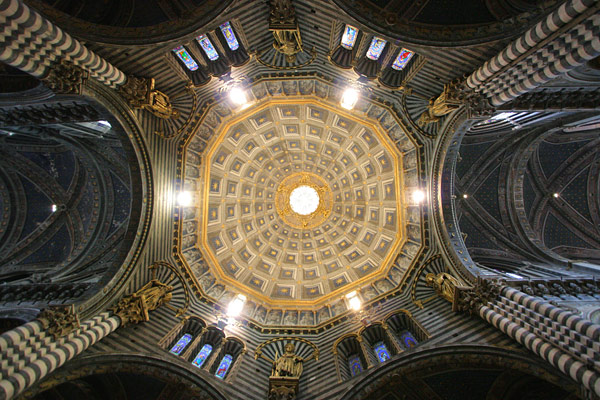 But where to point my camera, that was the question. Every single inch of the interior was a work of art. A marble pulpit by Pisano, a bronze St. John the Baptist by Donatello, a marble St. Paul by Michelangelo, a surreal dome over the transept framed in a sculptural army of Popes… could you possibly do more to a room? The answer to that question, a resounding ‘yes’, comes to those who visit the hyper-ornate Libreria Piccolomini on the north side of the nave. The room is a virtual walk-in fresco with mammoth illuminated vellum choir books which look like something straight out of Harry Potter. 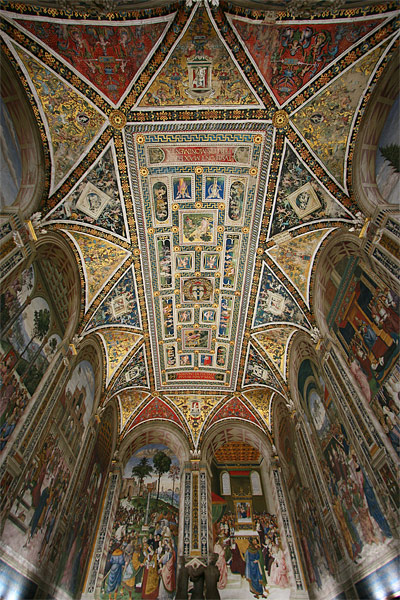 Like that fanciful clam-shell square, the cathedral speaks volumes on the resourcefulness and ambition that defined medieval Siena. In the 1300s, the city intended to turn the entire cathedral into the transept of a super-cathedral that would have created Italy’s largest church. Construction on the new behemoth was halted when the plague hit Siena in 1348. Today, one wall of that massive half-built nave and an unornamented facade survive adding a very cool, very large architectural flourish to the south side of the church. Visitors can climb up through that second facade for one of the most dramatic viewpoints in Tuscany. Don’t miss it. 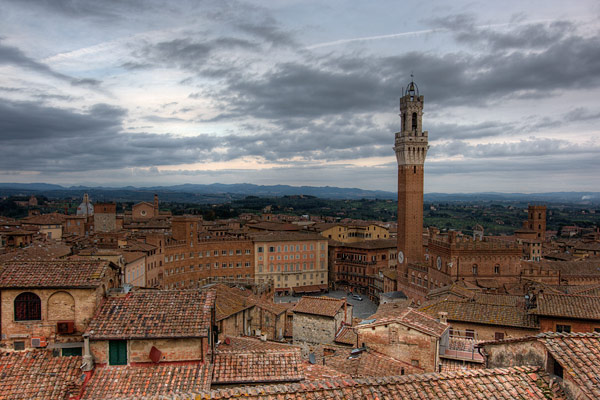 If you are on a budget, you may be tempted to skip the combo ticket for the Siena Cathedral and just enter the main church. Think twice before you do that. The combo ticket is actually a relatively good deal. For just $5 more, you get entry to the Libreria Piccolomini, the beautiful Saint John’s Baptistry  below the church, the hidden crypt with its ancient frescoes, and the cathedral museum as well as access to the cathedral’s very unique viewpoint over the city. I thought it was definitely worth it.