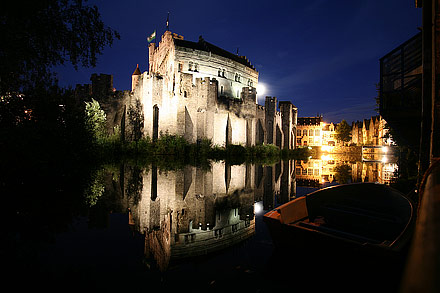 Midnight in Ghent at a backstreet dock staring out at Gravensteen waiting for the moon to rise above its fortified walls. Total silence except for a night bird and the sound of a small boat bumping up against the stone quay. In Europe, it’s rare to have perfect moments to yourself in such a remarkable city. But apparently, Flanders is somewhat of an exception.

My first thought when I arrived in Ghent was, “Flanders clearly does not do ugly cities.” Again, Ghent is an overlooked treasure of a town which somehow seems to have slipped below the radar of world travelers scanning the globe for that perfect destination. Am I starting to sound like a broken record here in Belgium?

Although it may not be a household name for much of the world, in the late Middle Ages, Ghent was among the largest cities in Europe. Some sources state it was second only to Paris in size. That history is clearly visible in Ghent’s stunning architectural heritage from the chunky walls of Gravensteen castle to the Gothic bell tower to the gabled houses that line the streets. 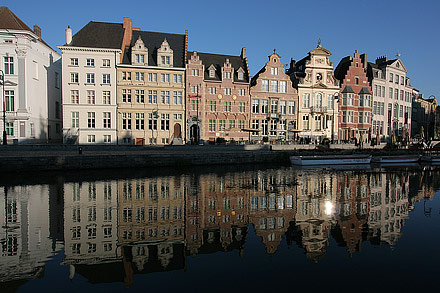 But Ghent is more than buildings. As with Antwerp and Mechelen, Ghent oozes a quirky, funky vibe that I’m starting to realize must be something distinctly Flemish. There is no better example of that Flemish twist than Ghent’s little Graffitistraat. Hidden in Werrengarenstraatje, a small back alley off Hoogpoort, “Graffiti Street” is a living work of street art which runs for several hundred yards. In fact, artists were hard at work while I was there. 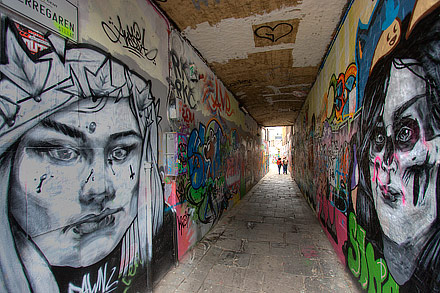 Like Graffitistraat, Ghent serves up a lot of unexpected treats: You can have breakfast and shop for vintage items at Le Jardin Bohémien, sample the ultimate in potato cuisine at Potatolicious, or hang with local musicians and enjoy the kitsch and camp at Pink Flamingos. Not quirky enough for you? How about lunch in a glass box while enjoying the panorama of large chunks of meat dangling down around you in the 15th-century Great Meat Hall. 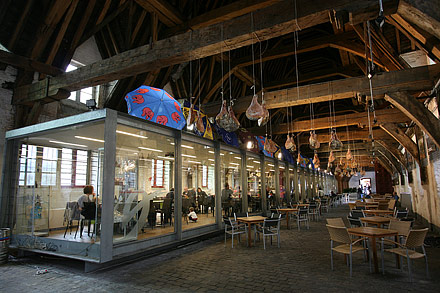 Speaking of big chunks of meat hanging from the ceiling, make sure you take the time to tour the Gravensteen and its collection of medieval torture devices. If you’ve got a young kid who’s bouncing off the walls and needs some serious distraction, the Gravensteen has epic gates, towering turrets, suits of armour, massive stone walls, grand halls, torture devices galore, a dungeon and even a catapult. And the best thing for families is that kids are free. (I think Ghent is awesome for allowing kids to explore the Gravensteen for free. Adults are 8 Euros; 6 Euros for those 19-26.) 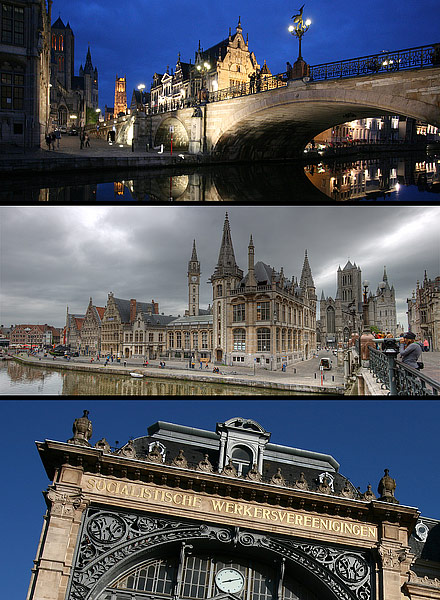 There are tons of things to do in Ghent. But as with every town I’ve visited in Flanders, the ultimate joy is simply strolling around taking in the atmosphere. Small discoveries abound, such as the the socialist slogans incorporated into the Art Nouveau house of the socialist trade union at the Vrijdagmarkt.

The city is made for walking. A stroll along the Korenlei across St. Michael’s Bridge taking in the view of the Graslei and back towards the Korenmarkt with its many towers and spires and St. Nicholas’ beyond is postcard-perfect. Boat tours take in the waterside attractions and there are endless side streets, alleys, cathedrals, and squares to explore. Just start wandering, there’s something around every corner. 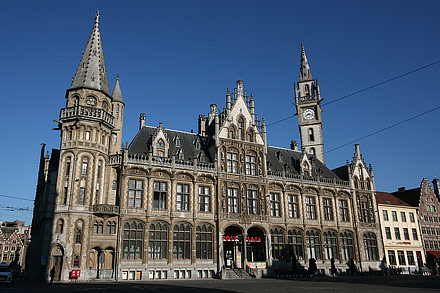 One response to “Ghent”