The fact that June is LGBT pride month in the United States is making me reflect on the (in)equality of gays and lesbians in other parts of the world. As a gay traveler, I’m always hyper-aware of countries where I could be punished simply for who I am. 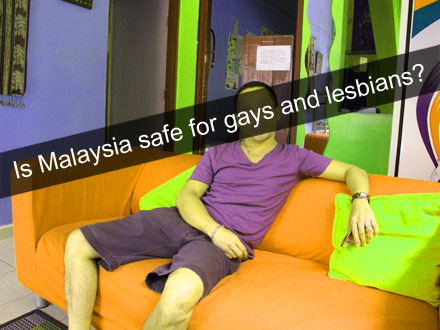 Malaysia is one of those countries where homosexuality is illegal. The dual legal system which applies both secular law to the population at large as well as Islamic law to the Muslim population can make life quite difficult for the Muslim LGBT community here. In addition to being punished in the Malaysian civil court, gay Muslim Malaysians also have to face the Sharia court. Penalties for being gay range from fines to imprisonment to caning. It’s a scary thought.

To learn more about the realities of life for the GLBT community here, I sat down with 33-year old Anuar, the gay Malaysian owner of our guesthouse in Kuala Lumpur. The interview revealed some surprising realities for gays and lesbians living in Malaysia.

Homosexuality is illegal in Malaysia. Are you open about your being gay? And if so, aren’t you afraid?

I’m probably open. It’s not like I get reminded by the police or get caught or anything like that. Let’s put it this way, it is much worse to catch an unmarried Muslim couple in one room doing something than to catch two guys together. It is much safer for us.

I assume gay couples would not normally walk hand-in-hand?

I have before. When you go to a place like the Middle East, Bangladesh or India, a lot of the men walk hand-in-hand. If the police did something against that here, people would bash Malaysia. There are so many things written in the law, but it’s not easy to enforce. That’s how it works. Because how do you know someone is gay just because they walk hand-in-hand?

Although cross-dressing is technically not illegal, I’ve heard of transgendered people being arrested. Is that a common problem here?

Actually, when you look at the Malaysian media, there are a lot of transsexuals. You see many TV presenters and writers wearing make-up. They are clearly public. But nothing happens to them. Same to people in shops because police don’t raid supermarkets or department stores, they raid nightclubs. And if you are caught cross-dressing in a club, you are in trouble.

All the time. Actually, I will say it’s very seasonal. Sometimes, they raid clubs before an election because they need to win the votes. But I think the raids are not about being gay, they are about taking drugs.

Are there any gay clubs in Kuala Lumpur?

Quite a few. There are four big ones, although there used to be more. One or two clubs are exclusively gay, the others have declared Friday night gay night. 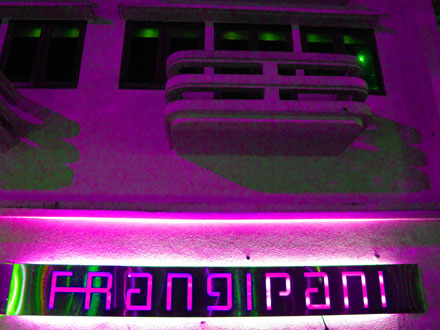 In your opinion, is living in Kuala Lumpur the best choice for Malaysian gays and lesbians?

It depends on what you want. Kuala Lumpur is probably the best place if you want to live openly. But if you are looking for entertainment, gay bars, massage parlors or saunas, KL is not the place. You need to go to Bangkok or Singapore for that. These places are much more open than Malaysia.

Which of the major ethnic groups in Malaysia – Malay, Indian, Chinese – do you consider the most gay-friendly, and which the least?

Chinese are the least gay-friendly. They have some negative attitude towards gays. I want to say Malays are more open towards gays. But, of course, I could be biased because I am Malay. As for Indians, I think it’s much more of a taboo in the Indian community. Although there are many gay Indians, you never see them in clubs.

In general, I think younger people, like students, are much more gay-friendly. This goes for all ethnicities. But once people get a good career going and earn money, their attitudes change. It’s probably the same everywhere.

Are your parents both Malay?

My mom is Malay, my dad, who passed away in 1997, was half Malay and half Chinese, which makes me a quarter Chinese.

Did you grow up in a religious family, and are you practicing any religion now?

Yes, I grew up in a religious family, but I’m the only one who is not religious now. All the other ones are. I have four older brothers, four older sisters, and one younger sister – but my mom loves me the most (he laughs).

Does your mom and your family know you are gay?

I’m sure my mom knows who I am, but we never talk about it. I’m the only one in the family who is single, everyone else is married. One time my brother-in-law asked me, “When are you going to get married?” But before I could say anything, my mom answered for me, “He will never get married.”

Although I’ve been single for four years, I still bring my ex-boyfriend to see my family. I’m sure they know.

What do you think would happen if you told them you are gay?

Do you feel treatment of gays and lesbians in Malaysia is changing?

I feel it’s always been the same. In Malaysia, people have a sense of respect for one another. It’s partly because of their religion and partly because of the Malaysian culture. Rather than saying harsh things about gays, they make jokes about them – in a friendly way.

Do you have any lesbian friends who are Muslim? Do you think they have to overcome more hurdles than their male counterparts?

I actually have quite a few lesbian friends. Many of them try very hard to look like men, so I think it’s much more difficult for them. But I will say most of them are not 100 percent lesbian. I think they are actually bisexual because some of them have boyfriends and a few I know have gotten married.

But don’t you think this is because of societal pressure rather than because of who they are?

I don’t know, but I think lesbian relationships are very difficult. I don’t think it has anything to do with society but more with them. If they are successful women and make their own money, it’s easier to live a lesbian life. But if they don’t have a good job, they start worrying about who will take care of them when they get older and don’t have kids, who is going to buy a house for them and so forth. So they eventually turn straight in the end – I have seen this many times.

Your guesthouse in Kuala Lumpur is listed in some gay publications. Are you not afraid of being targeted by the so-called morality police?

I think you might have a problem if you offer things like sauna and such. There might be a high possibility to be searched by the government, I guess.

Have you ever thought about leaving Malaysia and settling somewhere else?

Yes, Malaysia is not for me. I have a very different mentality from other Malaysians. I would like to go to North America or Europe. Actually, I have been all over Europe with the exception of Northern Europe.

There are many reasons why I would like to leave. First, I like to drink and Malaysia has probably some of the most expensive alcohol in the world. Besides, Muslims are not allowed to drink alcohol.

Third, I would like to open a bar and restaurant, but I can’t open it here because of the laws. If I want to sell alcohol as a Muslim, I have to partner with a non-Muslim. This means, I would not be allowed to own more than 49 percent of the business, which means I would be the minority share holder of the bar and restaurant. But I don’t want to do a partnership. The laws are complicated and I really don’t want to get into the drama.

Forth, corruption and cronyism are still a big problem here. If you have a minister who provides business opportunities to family members and friends, it cuts out general people from such opportunities. If you don’t know important people, it’s not that easy to make things happen. You can go to the bank and ask for a loan but if you don’t get a good recommendation letter from say the Ministry of Education or such a place, you will not get the loan. It always helps to know someone important. It’s probably the same in any country. If you are a good friend of Angela Merkel, she can probably write you a nice letter, too.

Lady Gaga recently released the song “Born this Way”. The government of Malaysia has censored the lyrics because they think the song promotes homosexuality. Are you aware of that?

Are you aware of any other censorship in Malaysia when it comes to gay issues such as Internet, newspapers, etc.?

Do you think Malaysia is a safe country for gay and lesbian visitors?

I think it’s quite safe. Most gays and lesbians who visit Malaysia know how to behave properly, so they don’t normally encounter any problems. For example if police raid a club to look for drugs, they never require urine tests from foreigners, they normally let them go.

Do you have some words of wisdom to gay and lesbian visitors?

Don’t be obviously physical in public. Although I have kissed my boyfriend in front of McDonald’s or walked hand-in-hand with him, I wouldn’t recommend it. The society here is not ready for it.

Generally, Asians don’t like people to be rude. And there are quite a few selfish tourists who think they can be rude to locals just because they have money to throw around. Just talk nicely to people.

Is there something else you would like to add?

Most of the gay people in Malaysia are very well educated. I know a lot of lawyers, doctors, engineers, and architects who are super successful. They are good, well-behaved citizens. I think the government shouldn’t focus so much on the issue of homosexuality, there are so many more important issues like poverty and corruption.

The interview with Anuar was quite interesting. I expected him to be much more worried and fearful about living in Malaysia as a gay Muslim. But this wasn’t really the case. He was more concerned about business opportunities, being able to drink alcohol cheaply, or the lack of gay establishments.

From what I understand, the laws against homosexuality are only enforced when there’s a benefit to be had. Accusing political opponents and raiding nightclubs for political gain are part of the game. This also makes it a bit trickier for gays and lesbians. There are no clear rules and just when you think you are safe, you have to remember, you are not.

During my research, I came across this interesting interview with Malaysia’s morality police: Homosexuality is a Crime Worse Than Murder. Read on to find out what Abdul Kadir, head of education and research at Malaysia’s Islamic Affairs Department, thinks of gays and lesbians.

On a side note, coming back to the subject of LGBT pride month, check out Cheapflights.com’s Top 10 destinations to celebrate gay rights. I’m sure you’ve guessed already, Malaysia is not one of them.

9 responses to “Gay in Malaysia”