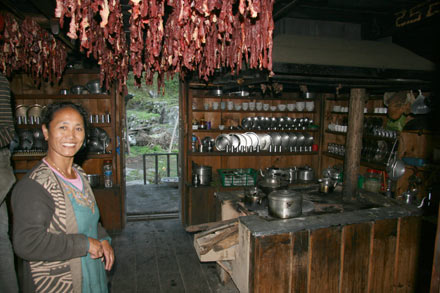 The Annapurna Circuit was only opened to tourism in 1977. What started out as “teahouse trekking” where tourists stayed in simple teahouses and ate local dishes, has become an almost luxurious experience. I’m using the word “luxurious” in a relative sense because we expected bedbug infested mattresses and filthy-like-in-China bathrooms – but nothing like that. 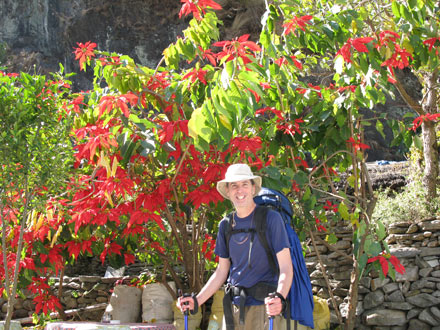 On the contrary, we are stunned by the standard of the food and accommodation. Most of the former teahouses have been replaced by small hotels and lodges. Although simple, the ones we have been staying in have been spotlessly clean and cared for, many with beautiful flower gardens, and each providing a warm solar shower or, at least, a bucket of hot water to freshen up before dinner. 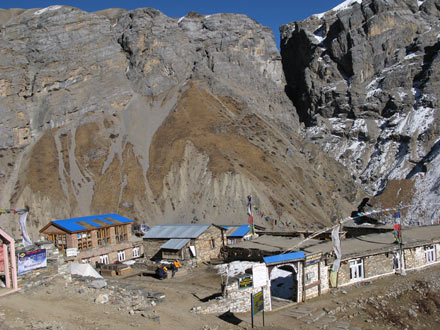 The quality of food is another big surprise. We expected mostly daal bhaat, a Nepali staple consisting of lentil soup, rice and vegetable curry. Don’t get me wrong, daal bhaat isn’t bad at all but a little variety in your diet can’t hurt, right? As it turns out, all my worries are unfounded. You can get almost anything on the circuit from vegetable burger to chicken sizzler to apple pie with custard. In fact, the Annapurna Circuit is also called the Apple Pie Trail. Apple pies or any other apple products you can think of (apple crumble, apple roll, dried apples or apple brandy) are widely available owing to the successful experimental introduction of apple orchards in the 1960s by the Nepalese government.

We are now totally hooked on apple brandy after a Scotsman told us to add it to our hot chocolates – yum! Try it yourself and you’ll agree!