Expedition Patagonia on the Via Australis

In one of our most incredible travel days on record, we stepped off our 11-day cruise returning from Antarctica, walked across the Ushuaia dock, and checked in for our 4-day cruise through the isles of Chilean Tierra del Fuego. Yes, two adventure cruises in one day does seem a bit over the top to us as well, but – hey – what better way to start our adventure across Patagonia?

Cruceros Australis offers a variety of expedition cruises through the isolated islands of the Tierra del Fuego Archipelago. It’s a vast region of untouched bays, glaciers, mountains and unique subpolar forests. This region closely resembles what Antarctica must have looked like millions of years ago before it was covered with ice. Cruceros Australis is also one of the only options for landing on Cape Horn, the most southerly point in South America. While Cape Horn is a major destination for geography aficionados, most people have no idea just how hard it is to reach the island. 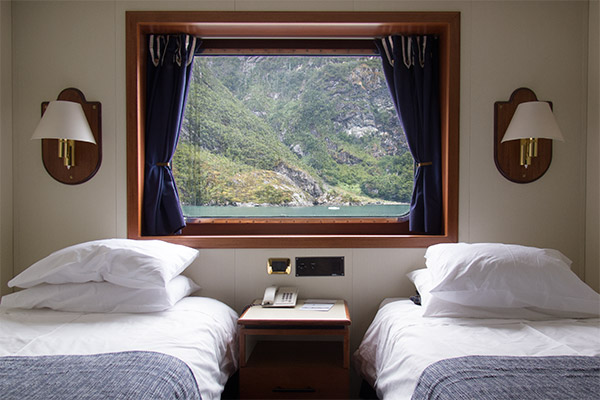 Our End of the World expedition cruise was a circular voyage that started and ended in Ushuaia. (Interestingly, our passports were stamped into Chile, but never stamped out of Argentina – that’s a first!) Stepping onto the Via Australis felt like we were stepping into a classic luxury hotel with gorgeous woodwork and royal blue carpets lining the passages and lounges. It almost felt like the setting for an Agatha Christie novel. The rooms were quite spacious with large windows to enjoy the scenery of Patagonia. The Via Australis calls itself an expedition ship, but honestly the rooms were so comfortable, you could easily forget you were even on a boat.

After checking in, we joined the other passengers in the Skye Lounge for drinks and introductions. Thomas and I were both kind of down because we had just parted ways with our Antarctica family, but almost immediately we met cool Dutch couple Danielle and Suzan, who we later discovered had been assigned to our dinner table – yay! 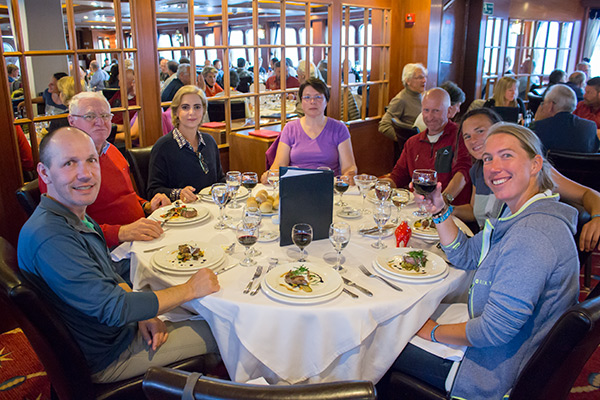 The permanent dining assignments are a bit of a risky move by Cruceros Australis, but we really lucked out with Danielle and Suzan as well as Germans Thomas and Kerstin and Brazilians Milton and Elena. Surprisingly for a cruise, most of us were actually traveling long-term, which meant that we had tons to discuss as I enjoyed my lamb shank and mashed potatoes with a large glass of Malbec. Panoramic windows on all decks meant we never missed the spectacular mountain views of Isla Navarino slipping by outside.

The following morning, while enjoying more great conversation over breakfast, those windows were doubly important as we navigated the northwest arm of the Beagle Channel up the Garibaldi Fjord to the spectacular Garibaldi Glacier. It might be a bit perplexing that we would even notice the landscape after Antarctica, but the beautiful scenery of Patagonia feels much more like Alaska or Norway than Antarctica today. The narrow fjords are filled with thick green forests, sheer rock walls, and ribbon-like waterfalls dropping out of the clouds. It’s stunning. 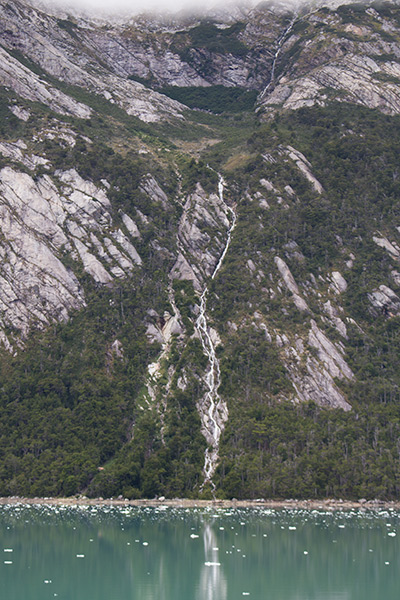 Our first zodiac outing took us past the Garibaldi Glacier to the extremely remote shores of the western reaches of Isla Grande de Tierra del Fuego. Access to these isolated forests is one of the main reasons why people join these cruises. There is virtually no other way to get here. Our guide Haron led us along a rocky trail through stunning, gnarled forests of southern beech, lenga and coihue up to a beautiful waterfall broken up into a hundred glistening threads of water.

Due to the slow rate of decay and a build-up of fallen leaves and limbs, the lichen encrusted Magellanic subpolar forests have a particularly enchanted vibe. They are also WET, so if you do the hike, make sure you have the right clothing because you’ll be ducking and squeezing and pushing your way through dripping foliage. The goal of the hike is the waterfall, but for us the best part was the unique forest environment itself. 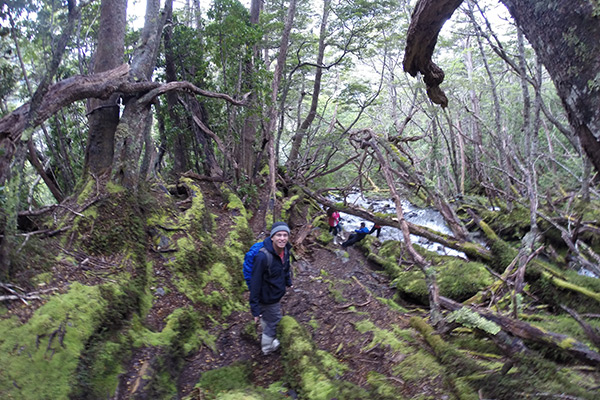 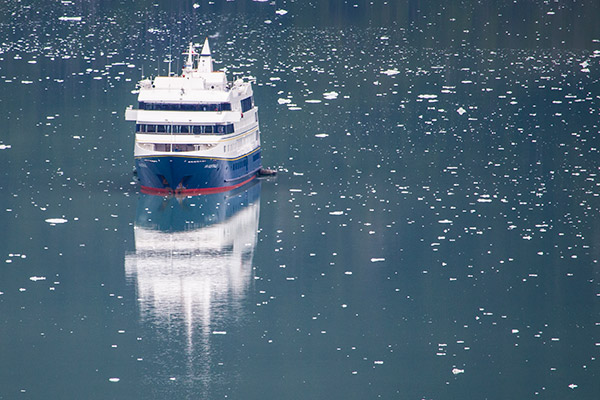 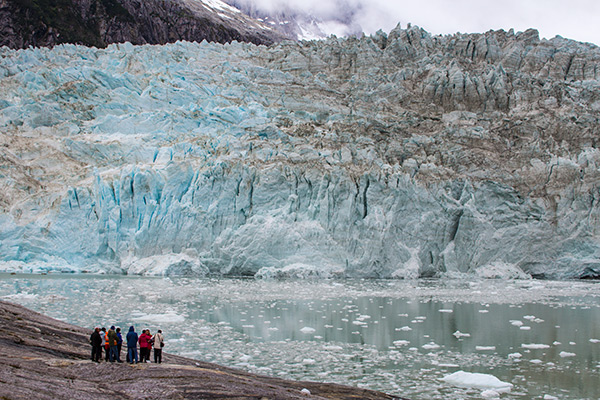 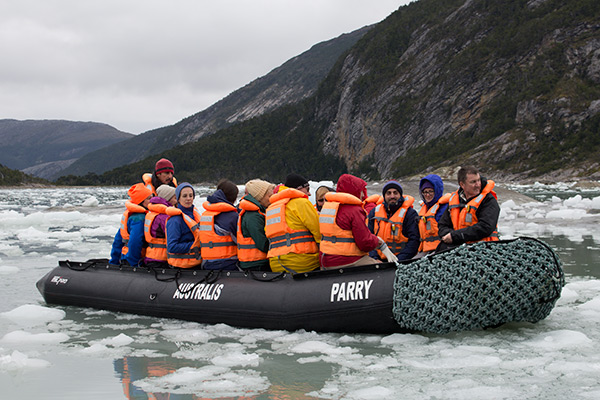 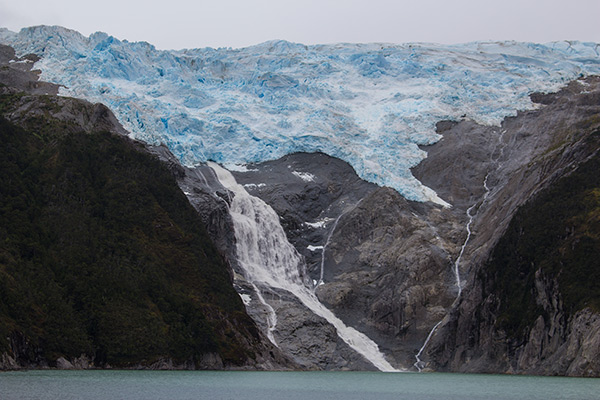 The Australis cruises rate their hiking outings as easy, moderate, and strenuous. We were pleasantly surprised by the intensity of the strenuous hike to the waterfall, but we quickly realized that the strenuous hikes can be a bit too rushed. (When I stopped to take pictures, I was actually told to keep moving – excuse me?!!!.) We preferred the moderate walks just to have a bit more time to photograph and to stop and enjoy the views. It’s also important for naturalists to understand that they will be hiking with other passengers; you won’t be alone here. But these cruises do offer up a very unique chance to visit a series of inaccessible wonders that you would otherwise have no chance of exploring.

Wonders like the exceptional Pia Glacier which actively calves into a beautiful, steep-walled fjord of the same name. Again, we boarded our zodiacs and pushed our way through the ice-packed fjord past massive walls of fractured ice to a shore of bald rock. We had the option of hiking up to higher viewpoints overlooking the glacier, but Thomas and I chose to spend most of our time lower to fully appreciate the calving action. Large chunks of cracking ice fell into the water, sending ripples and waves into the brash ice and mini-bergs causing a clinking and clanking that echoed off the fjord walls. Wow – speechless! 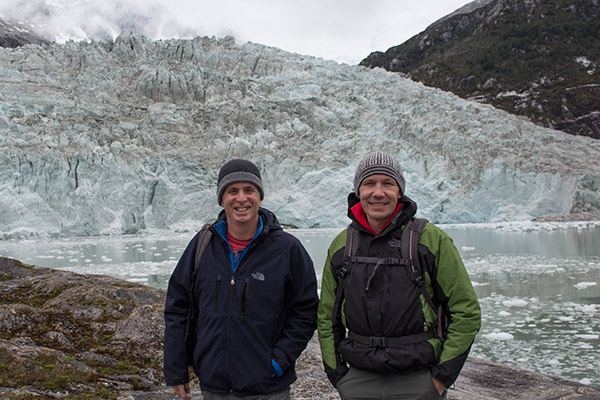 The ship continued along Glacier Alley revealing one extraordinary ice flow after another. Each of the glaciers was named after a country associated with early explorers. Hilariously, the ship celebrated each country by bringing out associated foods. As we passed Italy, they served red wine and pizza, France… cheese and champagne, Germany… sausages, sauerkraut, and beer. By the end of Glacier Alley, we were all happily stumbling and staggering around the boat. It was only later after we sobered up that we started to ask ourselves where that ice was coming from in these relatively low-lying islands. It turns out that there is a very large ice sheet over the southwest arm of Isla Grande de Tierra del Fuego. That’s one reason why this area remains so isolated.

If it sounds like this cruise is very food oriented, that’s because it is. The plentiful breakfast buffets were quite popular offering up a generous selection of favorites: bacon and eggs, pancakes, fresh fruits, yogurts, cold cuts, pastries – everything you could want. The EXCELLENT gourmet lunch buffets were always our favorite with a vast selection of cold and warm specialties as well as an impressive selection of desserts. We especially loved the heaping platters of smoked salmon and delicious local ceviches. There was really something for everyone. 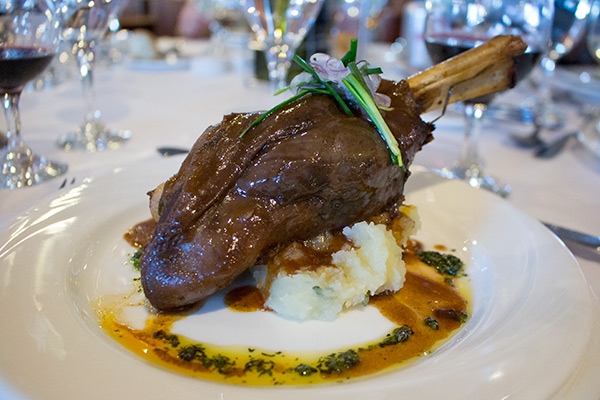 Dinners were usually quite good. Most meals were delicious including lamb shank, salmon, and beef sirloin with fabulous desserts like white chocolate mousse or rhubarb crumble with ice cream. However, there was one dish, tuna steak on a bed of seafood, that sat on everyone’s plate uneaten. The tuna was overcooked and extremely salty. It really did not go over well, at least at our table. I have to say that we were a bit surprised that that occurred. When Thomas leaves a tuna steak on his plate, something has gone wrong. Having said that, accidents happen; every other meal was fantastic.

The open bar was also a major attraction. And the bartender was quite generous with his drinks – no watering down here. In fact, one of his margaritas left me struggling to sit up straight. (Thanks Danielle and Suzan for propping me up.) But seriously, sitting on deck watching Patagonian islands drift by as you sip a Calafate sour is a luxury that few get to experience. Champagne and glaciers is a totally new indulgence for us. And we like it. 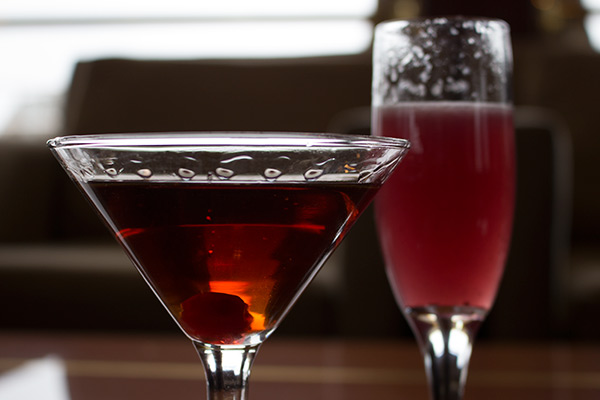 For many travelers, the highlight of the voyage is the zodiac landing on Cape Horn on day three. The Via Australis is one of the few options that travelers have for actually setting foot on the island, and even these cruises can’t guarantee a landing because, as we’ve mentioned before, weather and wave conditions in the Drake Passage are notoriously unpredictable. When we arrived, there was no wind and the seas were completely flat, but the captain waited until the very last second before announcing that the excursion was on.

To be really honest, Cape Horn itself is a rather simple place with rocky shores, wind-swept grasslands, a lighthouse, a small chapel and a rather unspectacular weather-damaged monument. It’s really more the idea of where you are that serves as the key attraction. For most passengers aboard our cruise, this would be the southernmost point they ever visit. For us, the impact was a bit dampened by the fact that we had just returned from the Antarctic Peninsula 1,000 km further south. However, we did enjoy the idea of setting foot on this VERY difficult to reach location (we love remote). We’re also geography junkies, so Cape Horn is kind of a required visit, isn’t it? 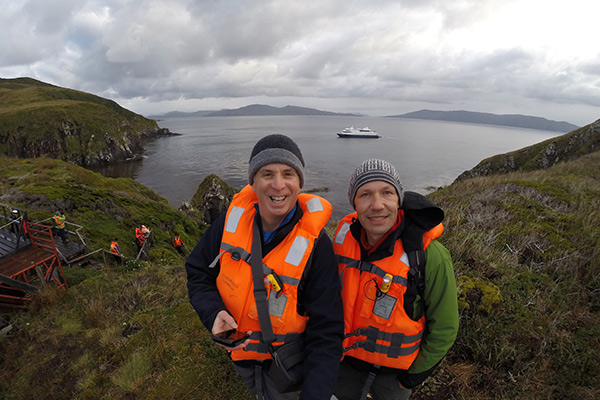 For Thomas and me, the highlight was more the opportunity to experience the archipelago’s isolated natural attractions. It was walking the deserted shores of places like Wulaia Bay on Isla Navarino, staring into the transparent waters, hiking through the picturesque forests, and standing at viewpoints scanning a horizon devoid of cities and towns. It was floating through remote bays as glaciers creaked and calved, feeling the mist of waterfalls wafting over us, and filling your lungs with pristine air. For many people, Tierra del Fuego means a quick visit to Ushuaia, but the vast region of islands and fjords begs for adventurers to look further afield. There is so much to discover.

Thanks to Cruceros Australis

We would like to thank Cruceros Australis for this exciting expedition cruise through the fjords and islands of Tierra del Fuego. This luxurious adventure offers the unique opportunity to get up close and personal with isolated forests and glaciers and set foot on the world famous island of Cape Horn. If you are interested in visiting the southern islands of Patagonia, Cruceros Australis offers a variety of cruises from 3 to 7 nights. Some itineraries are round-trip voyages out of Ushuaia or Punta Arenas; others are one-way voyages connecting the two ports. For more information, visit their website at www.australis.com. 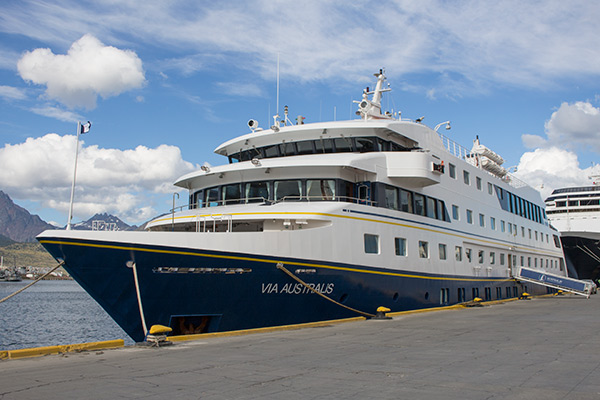 Disclosure: During our Tierra del Fuego cruise on the Via Australis, we were guests of Cruceros Australis. However, all of the opinions expressed here are our own.

12 responses to “Expedition Patagonia on the Via Australis”