I thought the newly implemented pre-registration with Homeland Security for U.S. visitors was just annoying, but at least it was free. Now, as it turns out, America is going to slap a price tag on it. That’s outrageous! 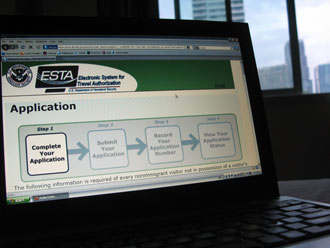 When I talked about the ESTA scheme in Welcome to America, I was bothered by the lopsidedness of the reciprocal visa procedure. Now, Congress has gone a step further. It just passed the Travel Promotion Act, a law which is supposed to promote the United States as a travel destination. Part of this program will be financed by imposing a $14 fee on tourists from visa-waiver countries whenever they renew their ESTA registration. Basically, ESTA is a visa in disguise. So much for the visa-free travel between the United States and the European Union.

Slapping an annoying new $14 fee and a load of confusing bureaucracy on tourists doesn’t seem to be the brightest way to “encourage” tourism. If you are American and you think this doesn’t affect you, think again. Visa waiver countries are sure to retaliate with a similar system. Oh, will the bureaucrats ever learn? If this is the government’s way to promote tourism, just imagine what they’ll do with health care!