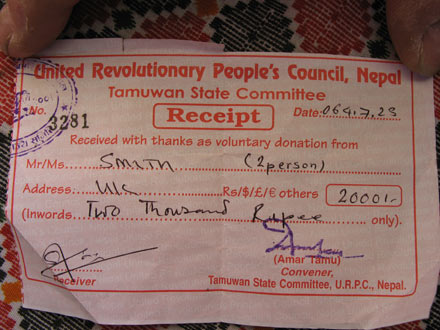 Tony and I had been walking for seven hours and were only 45 minutes away from Tal, where we would spend the night, when we ran into a very upset French couple. “Za Maoists are about ten minutes from ‘ere and are demanding money!” the Frenchman exclaimed and told us that they had to pay the equivalent of $20 each (100 rupees for each day of hiking on the circuit). We were left standing alone on the trail with a sinking feeling in our stomachs because we had heard about violence against tourists who didn’t pay up. What were we supposed to do?

We quickly devised a plan because one thing was clear – we weren’t going to pay any money to the Maoists. For one thing, we had a certain budget and the Maoists’ demands were not calculated in, for another thing, we didn’t want to support a group who had planted bombs and killed tourists in the past.

We came up with a few scenarios but quickly abandoned the idea of playing deaf-mute because I simply had no idea what to do with my fingers. We finally decided on just walking through the Maoist checkpoint without acknowledging them or making any eye contact. If we had to speak to each other, we would only use German.

Hearts beating like crazy, we walked on and soon saw the red Maoist flag waving from a pole ahead on the trail. As the Maoists were greeting us and we noticed that they didn’t have any weapons, we flew by them single file with me at the back. I’m sure Tony was surprised how easy it was, not noticing that I was fighting off one of the guys who had grabbed on to my backpack. A few jerks side to side did the trick. I was free to go and hurried after Tony who was totally oblivious to my being in dire peril.

After talking to other trekkers later on, we realized that most people actually did pay the Maoists but that everyone handed over a different amount depending on their bargaining skills. People even got a receipt for their “voluntary donation” (what a slap in the face) as proof that they had already paid in case they encountered other Maoist groups along the trail. After all, the Maoist weren’t that heartless – you only had to pay once! To my surprise, the tour groups with a guide totally got screwed over. Most of the groups paid full price, convinced that their guides had gotten them a good deal, but they were completely unaware that the guides had an alternative motive. They themselves didn’t want to get into trouble with the Maoists who they encountered over and over again while guiding tourists on the Annapurna Circuit.