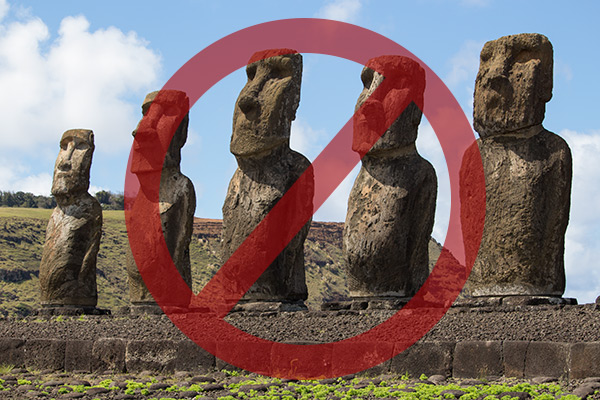 As I mentioned in our previous post, Easter Island is remote. To be blunt, the isolated Polynesian island represents one of the ultimate travel dead-ends. Yes, some people manage to “drop by” on trans-South Pacific flights from Chile via Tahiti to Australia or New Zealand, but even that “bargain” is not such a bargain. In other words, you come here because you have gone WAY out of your way to experience its amazing history and culture.

As I hinted at in our previous post, nationalist unrest meant that it was NOT business as usual during our visit to Easter Island. Our first full day, we were scheduled to go on a tour with a local company based in Hanga Roa. Just as we were leaving, national park officials stopped our bus and announced that a band of angry locals had blocked the roads out of town and had taken over the national park.

Basically, everything outside of Hanga Roa is considered the national park, so that effectively meant we were being held captive in town. Imagine flying thousands of miles into the middle of the Pacific to visit the archaeological treasures of Easter Island only to be told that you would be trapped in a painfully small one-horse town just a stone’s throw from those very treasures. Even access to the beaches was blocked. We were told we should wait patiently for the stand-off to end. (I’ll skip ahead quickly to tell you that even after 10 days on the island, the stand-off had not fully ended.)

From the very moment the occupation of the national park began, the significant cultural differences between Polynesians and Westerners started to cause problems. (I’ll admit I was a leading thorn in their side.) It apparently seemed quite strange to the Rapa Nui that tourists wouldn’t just sit in their hotels smiling as they were being used as pawns in a strategic battle with the Chilean government. The fact that we were mad because we had spent enormous amounts of money to be caught up in these games didn’t really seem to register with locals at all. 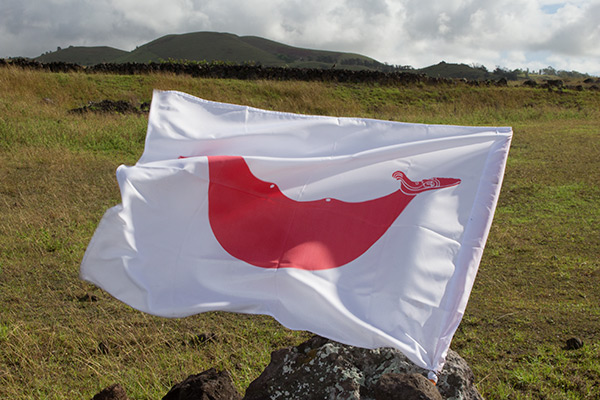 Eager to do anything to stave off boredom, Thomas and I headed down to the moai statues within town at Ahu Tahai. A few tourists stood around arguing with locals blocking access to the grassy area around the statues. Easter Island flags bearing the red reimiro symbol, derived from the wooden pectoral ornaments traditionally worn by Rapa Nui women, had been affixed to rocks and posts near the entrance. As we approached, a woman yelled at us in a barrage of Rapa Nui sentences. Of course, she knew that we didn’t understand her and she certainly spoke fluent Spanish, but her linguistic attack was a form of verbal chest pounding meant to intimidate us. We yawned at the display.

When she and the others finally switched to Spanish, we asked why we were being held in town. What followed was a stream-of-consciousness flow of incoherent explanations which clearly revealed that the protesters themselves really had no idea what they were doing. For one man, it was a movement for full independence. For another, it was an attempt to split national park revenue fees with the Chilean government. One woman demanded that the flow of immigrants from the Chilean mainland stop immediately. Another woman waxed poetic about living in total isolation cut off from the world. God, we thought to ourselves, this is not going to end anytime soon. And we were right. 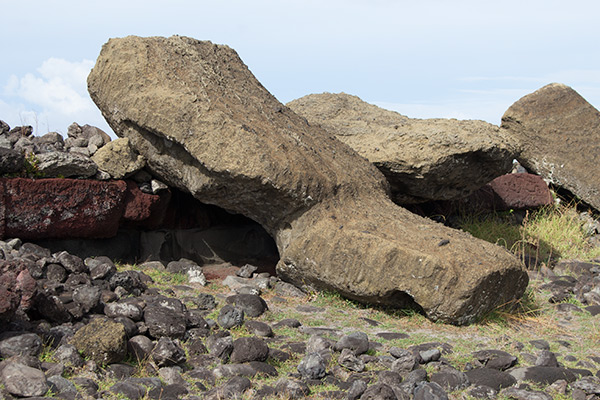 Long ago, the islanders toppled their amazing statues. Were they now going to topple their tourism industry?

That didn’t mean we weren’t still seriously determined to see the famous sites on the island. Even on day one, rebellious tourists (including us) discovered certain foot paths leading north out of town were not being blocked, so there was a trickle of bitter visitors winding north along the rocky coast dodging houses and roads because we didn’t know which locals were involved in the stand-off and which weren’t. Several of us managed to take in the lava tubes and ruins at Ana Kakenga and Ahu Tepeu. A few of us managed to walk all the way to the impressive inland site at Ahu Akivi. Hilariously, we ended up walking back along one of the blocked roads baffling protesters who didn’t really know what they were supposed to do with tourists approaching from the wrong side of the block.

Any hope that the stand-off would end soon was shattered on day two. Flights into Easter Island were first delayed and then totally stopped, stranding many tourists in Hanga Roa and causing a serious backlog in the already limited number of seats to and from the Chilean mainland. Rumors swirled that protesters had taken over the airport. Locals assured us that the canceled flights were simply a result of mechanical problems with the plane, something they claimed was a constant source of delays and cancellations.

Flights into Easter Island were first delayed and then totally stopped, stranding many tourists in Hanga Roa…

Neither explanation went down well with visitors who were suddenly feeling very claustrophobic stranded in the middle of the Pacific with a band of angry locals who were desperate to gain the attention of the government of Chile. Confused tourists became angrier as they missed connecting flights to Europe, the States, Asia and Australia. We argued with locals that they needed to end the stand-off quickly before fights started to break out. Their bizarrely comatose responses and tacit acceptance of the stand-off, which was supposedly being carried out by a “small number of people,” started to reveal that even the locals who were on “our side” were, perhaps, a bit more supportive of the stand-off than they should be. To add to the tension, several of the tourists started to report that many of the protesters they encountered were drunk or stoned. We actually encountered a number of drunk and stoned people ourselves.

The atmosphere went from strange to stranger as locals sped through town in their jacked up pickups waving Easter Island flags. On day three, day tours were allowed to cross the protesters’ road blocks as long as they were being led by someone who was ethnically Rapa Nui. The bizarre implications of the flags and ethnic requirements for tours were completely lost on locals.

On day three, day tours were allowed to cross the protesters’ road blocks as long as they were being led by someone who was ethnically Rapa Nui.

Some visitors, including Thomas and myself, managed to talk their way through road blocks in rental cars. It was an intimidating situation as we were stopped and questioned over and over by locals who were now dressed in military fatigues and were clearly pumped up with a sense of victory at having taken control of the island. Local police and park officials were nowhere to be seen. 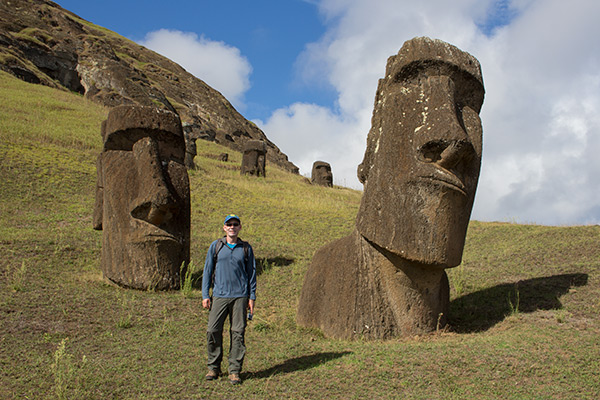 In the previous post, I mentioned that there was something wrong, maybe disturbing, with one of the pictures. In particular, the picture of us standing in front of two of the most famous heads at Rano Raraku. In the picture, we have stepped over the barrier and are posing between the heads. During our first visit to the famous site, one of the protesters occupying Rano Raraku was eager to demonstrate his total authority by encouraging us to ignore the boundaries. Who were we to argue with the guy dressed in military fatigues, right? Hilariously, the next day Rano Raraku was being guarded by a stoned woman wearing a muumuu and a headdress made of leaves. She asked visitors to respect the barriers.

To be honest, I really believe many of the locals DID NOT understand how the weird ethnic requirements, the confusion over the stand-off, the power-tripping behavior, the military fatigues, and the drug and alcohol use were scaring visitors. I really think they were celebrating what they felt was a victory over the Chilean government. For outsiders, it was really not clear where all this was heading and what would happen if the Chilean government didn’t respond well. 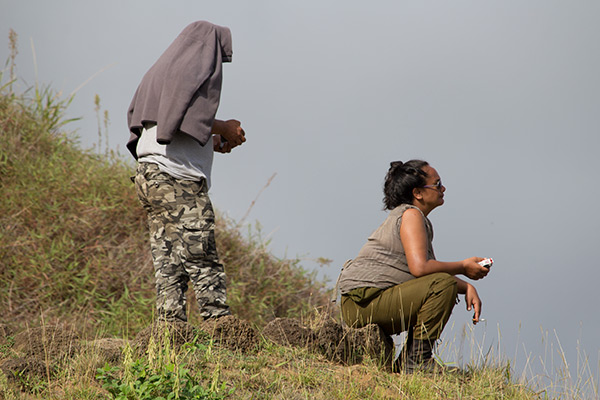 Representatives were sent to the mainland to negotiate with the government. I have no idea what they were actually negotiating, but it didn’t seem like they were getting what they wanted. The government never regained control of the park during our stay. In a strange way, this worked to our benefit because the normal policy of being allowed to visit Rano Raraku and Orongo Village only once on your national park ticket was not being enforced, so we were able to visit both sites repeatedly. For other visitors, the stand-off was a total disaster. We met several people who had spent huge amounts of money to come all the way to Easter Island and never managed to visit any of the island outside of Hanga Roa. Can you imagine coming all the way here and NOT being able to see the famous sites?

“I don’t care about tourists. I don’t care if they come or not. We can live off of sweet potatoes and tuna.”

And that is exactly the reason why I am writing this post. I want people to clearly understand that the tensions on Easter Island can impact your visit here. I am not judging whether the protesters were right or wrong. Even a very cursory look at the island’s volatile history makes it very clear that there are many reasons to be angry. But this is a long way to come to see nothing. Most visitors will come to Easter Island, love the experience, love the sites, love the people and leave happily. But this was not the first time that tourists have become caught up in nationalistic Rapa Nui actions. In 2009, protesters took control of the airport and blocked flights for a week. When I spoke to one of the protestors blocking the moai statues in Hanga Roa if she was afraid that such stand-offs might scare away tourists, she answered, “I don’t care about tourists. I don’t care if they come or not. We can live off of sweet potatoes and tuna.”