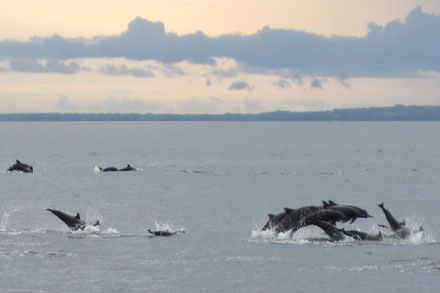 Ripples throughout the picture only hint at the number of dolphins below the surface.

Returning from our dive trip to Calanggaman Island, we had yet another stroke of extraordinary luck. Well before we arrived on the scene, we could make out chaotic splashing on the horizon and what appeared to be animals leaping out of the water. As we approached, we realized that we had stumbled upon yet another of nature’s great spectacles: a dolphin superpod.

I’ve seen dolphins from California to Madagascar to Indonesia, but I had never seen anything like this in my life. Hundreds upon hundreds of spinner dolphins forming one massive group. At the center a chaotic splashing in what appeared to be a unified attack on a large school of fish. Hyped from the hunt, all around us dolphins leapt through the air. Some shot up high above the surface performing feats of aerial acrobatics straight out of a Seaworld show. Incredible. Thresher sharks, a manta, off-shore tornadoes, pygmy seahorses, and a dolphin superpod. Perhaps, the Philippines is giving us a few good-bye gifts before we leave the country.

One response to “Dolphin Superpod”