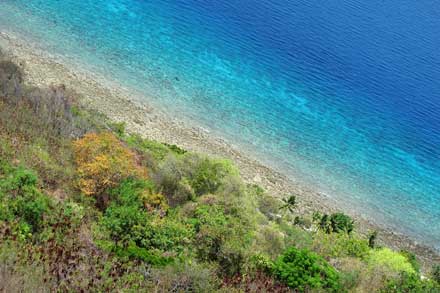 Diving our way through Nusa Tenggara, I have to admit that I had high expectations for the rumored underwater treasures of Alor. Perhaps, after the spectacular U.S.S. Liberty in Bali, sunfish spotting in Nusa Lembonggan, the underwater splendor of Komodo and the quirky muck discoveries in Maumere, I had set those expectations a little too high.

Even our arrival in Alor kicked those unrealistic expectations up a notch. The unusually stunning – almost arctic – crytal blue waters around Alor simply look like they should provide the best diving in the world. As our ferry approached Kalabahi, the massive resident dolphin superpod – only the second superpod we’ve ever seen – surrounded our boat and escorted us to the island. How could this possibly be anything less than perfect?

But reality started to set in once we started looking for a dive shop. Realistically, if you are not on a liveaboard, you only have two options in Alor: the dive shop at La Petite Kepa and Alor Dive, based in Kalabahi.

The French-owned shop at La Petite Kepa has an excellent reputation for quality dives; it also has a reputation for snobby behavior, discriminating against non-French speakers, and not answering their phones or responding to emails. As I was traveling with Catherine (a native of France) and I also speak French, I was certain I would be able to penetrate the cultural barrier that surrounded the little resort island. Unfortunately, that part about their not answering the phones or responding to emails meant we didn’t even really have a chance to try. Later, in Kalabahi, a friendly local handed me their “secret” phone number. Annoyed by the games, I threw it in the garbage.

We have heard good reports about Alor Divers on Pantar Island just opposite Alor. This is another option for those looking to dive in the area.

So essentially, the decision to dive with Alor Dive was made for me. Thomas, who runs the shop, makes for a rather “subdued” first impression. I have to admit when I met him, my first thought was, “Gee, I wonder if there is another dive shop hidden on this island somewhere.” That impression turned out to be good gut instinct. He seemed uninterested or unable to answer basic questions about local highlights. I really wanted to walk out, but with few options, I decided to just go with him.

As we approached our first dive site, that superpod, which frequents the channel, was back. Hundreds if not thousands of dolphins leapt into the air around our boat – we divers were practically foaming at the mouth. Yet predictably, once we entered the water, not a single dolphin was to be seen. Oh well, that’s not the first time dolphin-teases have toyed with a boat. A disappointment, but no fault of Alor.

Under the glassy surface at Clown Valley, marvelously intact coral reefs promised fish aplenty (or so I thought). We slithered through tiny canyons lined with soft corals, glided over endless anemones filled with clownfish, and – WHOOSH – I noticed my BCD was suddenly inflating on its own. (Apparently, there was an internal leak.) I immediately started letting the air out and desperately tried to figure out what was wrong. I looked over and noticed my dive buddy Michael struggling with his BCD as well. Hmmm.

I continued to let air out of the BCD as I swam, annoyed that this would definitely shorten my dive. We searched under rocks looking for wobbegongs or other surprises. There were none. I felt uneasy, as though something was wrong. And then I suddenly realized what was missing: the fish. There were surprisingly few fish.

What I did notice were several woven rattan fish traps. From an anthropological standpoint, the tribal fish traps were fascinating. From a diver’s standpoint, they were a major bummer. Continuing the dive, we did score a couple of large barracudas, and the coral was wonderful, but the dive provided few highlights. Thomas (remember that’s the shop owner’s name, I’m not talking about my Thomas) was on autopilot throughout the dive. He seemed unaware of our equipment issues, or more likely he was very aware of the problems, but was ignoring them. After about twenty minutes, Michael surfaced alone due to his leaking BCD. Thomas proceeded through the remainder of my dive on autopilot and only pointed to the most obvious creatures.

During our surface interval, Thomas repaired Michael’s equipment which gave me hope that the first dive had been a fluke. Unfortunately, the second dive at Coconut Grove wasn’t much better. I was happy to see intact, healthy coral, but, again, the site appeared overfished and we passed several rattan fish traps. (I should add that it’s quite possible the lack of fish could be related to the enormous dolphin superpod as well as seasonal movements of fish.)

Our third dive at Amphera was a completely different story. Here, the very promising muck site offered up enormous potential and, for the first time, I started to get excited about Alor. The problem with this dive was Thomas. Again, he seemed to be diving on autopilot with the principle goal of finding the very spectacular giant orange frogfish. (Don’t get me wrong, I loved that extraordinary frogfish.) But anyone who loves muck diving will point out that if you dive with only one target in mind, you are going to miss out on A LOT. Thomas did point out a stunning broadclub cuttlefish, but he obliviously swam right over some awesome jewels including several unique pipefish and a beautiful zebra eel. He also made the upsetting decision to finish the dive after only 45 minutes. It was a shallow site and we all had plenty of air (including me with the leak in my BCD), but, apparently, Thomas was done.

Despite calling off the dive early, my curiosity was piqued by the fabulous muck potential I had seen at Amphera. I approached Thomas on the ride back to Kalabahi and asked about overfishing, other muck sites, and what other highlights might exist around Alor. My questions seemed to annoy him and his priority seemed to be to just sit in silence. From my standpoint, I saw a dive shop owner who was literally the worst salesperson I have ever met in my life. As his dives were not cheap, I decided I had just done my last dive in Alor.

Michael continued to dive with the shop for several days and enjoyed the coral, but confirmed that our first three dives were quite representative of the general dive experience with Thomas at Alor Dive.

In reality, there may be some good fish or pelagic sites between Alor and neighboring Pantar and there is certainly a great deal of muck diving potential. But with one dive shop not answering its phones and the other offering shoddy equipment and a disinterested dive guide, it’s hard to imagine a diving experience which could ever compete with some of Indonesia’s more famous dive locations. The one good thing here is that you usually have the sites to yourself.

If anyone has managed to dive with La Petite Kepa, we would love to hear about your experience with them in the comment section below.

By the way, I have not posted any dive pictures for this post because of some issues with the underwater housing for my camera. Alor’s coral is comparable to Komodo’s and Nusa Lembonggan’s.

49 responses to “Disappointing Diving in Alor”