Did I Find Evidence that the Mona Lisa is a Man? 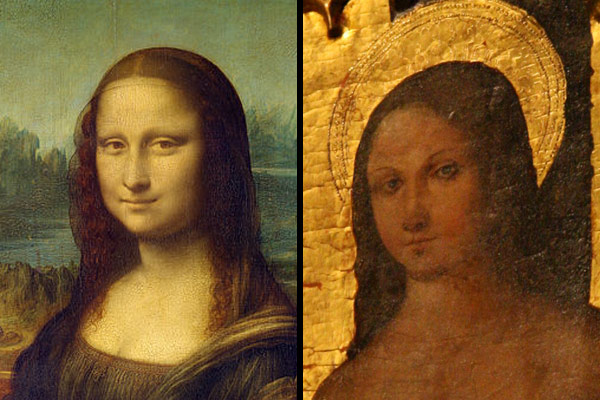 OK, my previous post on Valencia’s Holy Grail may have left Dan Brown fans a little down in the dumps. So in the interest of bringing a little speculative mystery to our far too mundane lives, I thought that I should mention that while I was exploring the Cathedral of Valencia, I may have stumbled upon a bit of evidence to support the theory that the Mona Lisa was a man.

What?!!! Ok, maybe not everyone is hip to this theory, so I should probably explain a bit.

Through many of his paintings and sketches, it is quite clear that Leonardo was fascinated with the concept of androgyny: his men and women look suspiciously similar. Some have suggested that the Mona Lisa is actually a painting of a man dressed as a woman. Many, including me, think good old Mona strongly resembles Salai. This theory is marginally supported by two pieces of evidence beyond looks: Leonardo left the Mona Lisa to Salai in his will, and Salai painted a nude version of the Mona Lisa which looks – well – like Salai.

Now, back to the Cathedral of Valencia. Approaching the Chapel of St. Denys and St. Margaret, my eye immediately caught the face of the figure on the right shutter of the altar piece. Well, that woman looks just like the Mona Lisa, I thought to myself. 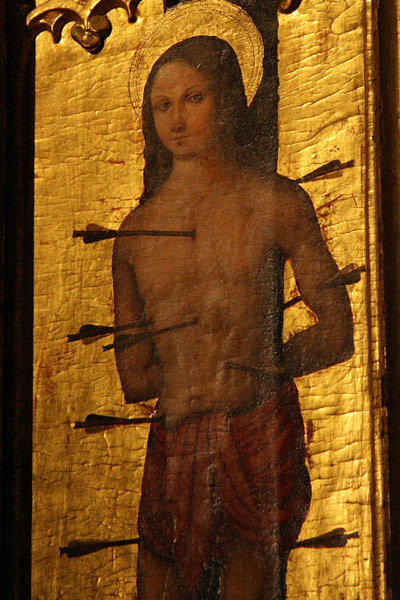 As I moved a little closer to the altar piece, which was partially obscured by railing, I suddenly realized that it was not a woman, it was a man. I was struck by the fact that none of the other figures on the altar piece looked even remotely androgynous. How strange! Even odder, the figure was a representation of Saint Sebastian, often called the world’s original gay icon. (If you don’t understand that statement, Google Renaissance paintings of Saint Sebastian.)

The conspiracy theorist in me suddenly started asking questions; questions I know will never have clear answers. Could the artist have been painting in a historical slam aimed at the great Leonardo’s proclivities, much as a hip-hop artist might trash his rival in a song? After all, the art world is full of inside jokes. Or was this the Renaissance version of tabloid gossip? Before you dismiss those ideas too quickly, here’s an interesting coincidence: the painting was done by Vicente Macip, who studied in Italy at the turn of the 15th to 16th century, right around the time that the Mona Lisa is thought to have been painted. (If you start googling dates, which I highly encourage, make sure to notice that dates attributed to paintings are often rough estimates.)

Revisionist fantasies? A historical memory, a joke, a mean-spirited homophobic jab by Macip? A mere coincidence? Who knows? But it certainly adds even more interest to a visit to the Cathedral of Valencia. And that androgynous figure serves to remind us of just how much of our gay and lesbian history has been lost due to active suppression by the church. If we are forced to grasp desperately for any link to our past, it’s because we have been left with no other choice. And seriously, is my story here any less likely than that of the Holy Grail.

2 responses to “Did I Find Evidence that the Mona Lisa is a Man?”