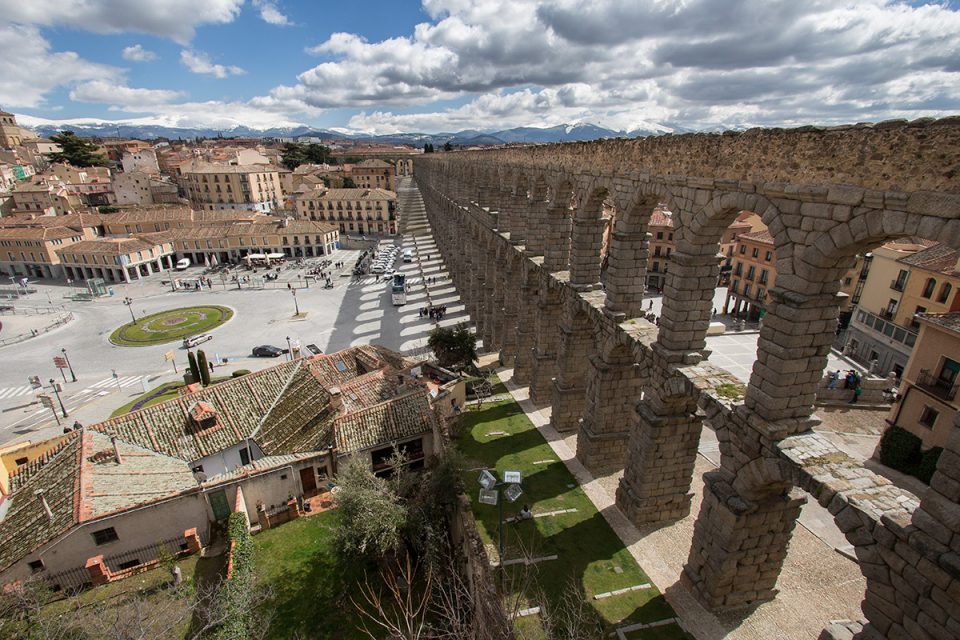 Madrid as a destination far exceeded our expectations. After spending three weeks in Spain’s booming capital, we were completely hooked on one of Europe’s most enjoyable cities. Not only are there millions of things to do in Madrid itself, the city offers easy access to all kinds of attractions in the surrounding countryside. If you love walled towns, medieval castles, and Roman ruins all with an accent of Castile, Madrid is the perfect hub to kick back and do some day-tripping.

While most of the more popular destinations can be reached by public transportation, renting a car in Madrid will give you a lot more flexibility and comfort. From our experience, car rentals in Spain are particularly easy and affordable. During our time in Madrid, we did five different day trips to nearby towns, all recognized as UNESCO World Heritage Sites. So without further ado, here’s our list of the five best day trips from Madrid, including our personal favorites. 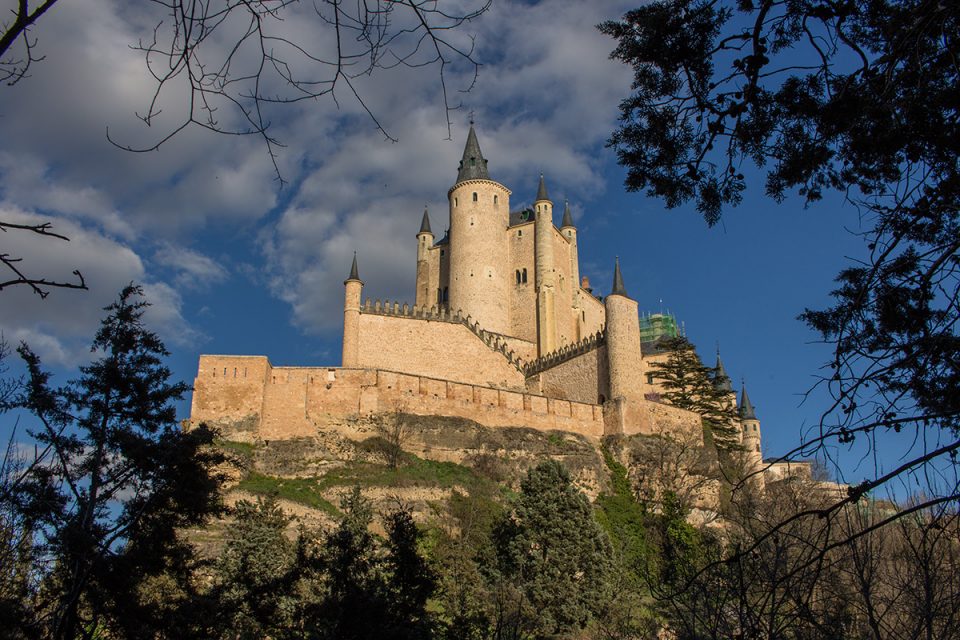 Segovia’s walled old city is incredibly atmospheric. It’s a magical place of golden sandstone and warm terracotta tiles. Perched on a rocky bluff at the edge of town, the Alcázar of Segovia towers above like a magical fortress out of “The Lord of the Rings.” Its meticulously restored interior is equally fantastical.

We highly recommend spending a few hours exploring the royal castle’s lavishly decked-out rooms, including its woven tapestries, knight’s armor, gilded ceilings, and Moorish-influenced tiles. Very cool. The Alcázar had long been on Tony’s bucketlist. In fact, a poster of the fortress guarded over his bed as a kid. Needless to say, he was absolutely thrilled to make his childhood dreams a reality. But Segovia is much more than a castle. 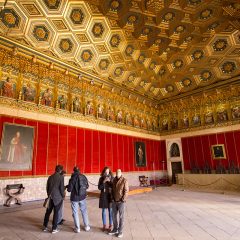 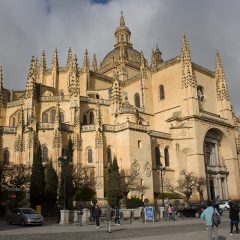 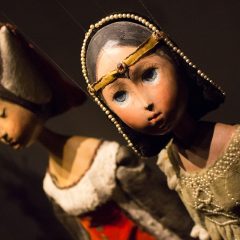 The city also boasts several other attractions, including the mammoth Roman aqueduct built in 50 BC and the photogenic Segovia Cathedral. Some may argue, however, that the city’s biggest draw is its signature dish, cochinillo asado or roast suckling pig. Makes sense to us. Yum! With its culinary and architectural highlights, Segovia turned out to be Tony’s favorite day trip (read on to find out mine). 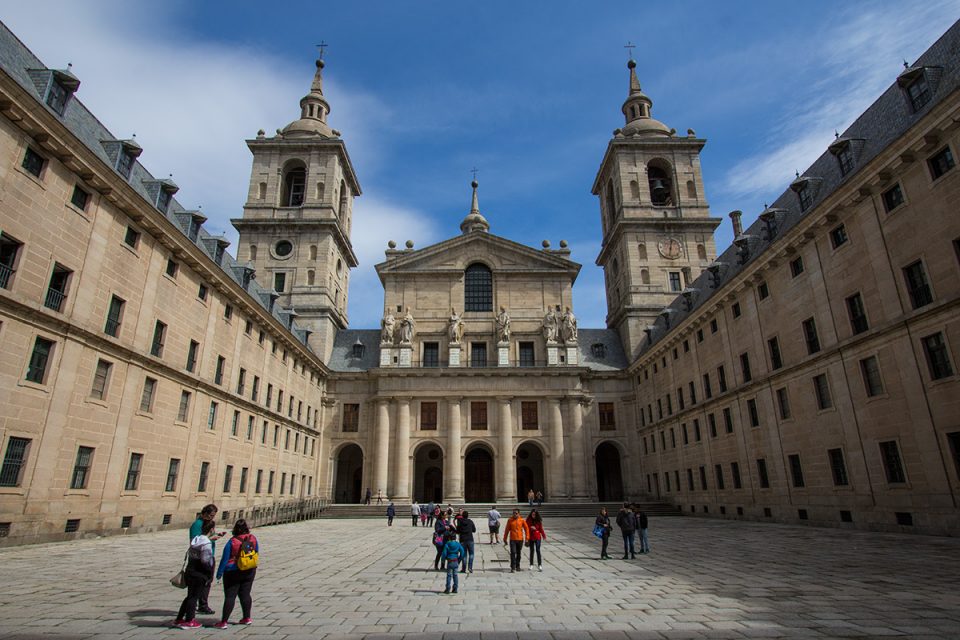 Located just 50 kilometers (31 mi) from the capital in the foothills of the Sierra de Guadarrama, the San Lorenzo de El Escorial monastery makes for one of the most popular day trips from Madrid. UNESCO recognized the late 16th-century monument for its imposingly austere, almost forbidding architecture.

But as barren as the granite-and-slate complex may be on the outside, El Escorial hides a wealth of art and adornment within. From the decorated high altar of the large basilica to the polished Toledo marble of the tomb-filled Pantheon of Kings, this giant place has something for everyone. Even the most jaded visitor will ooh and aah over the exceptional library frescoes, our favorite part of the palace. 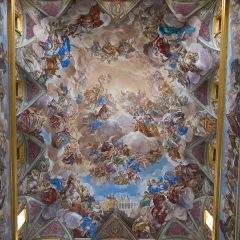 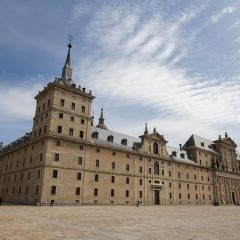 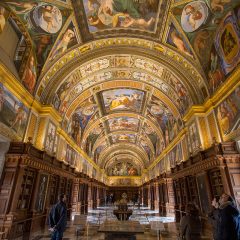 Unlike the royal monastery, the town San Lorenzo de El Escorial itself is nothing to write home about. If you are day tripping in your own car, you might consider combining your visit to the monastery with a side trip to the nearby Valley of the Fallen (Valle de los Caidos) where a large basilica and a monumental cross commemorate those who lost their lives in the Spanish Civil War. 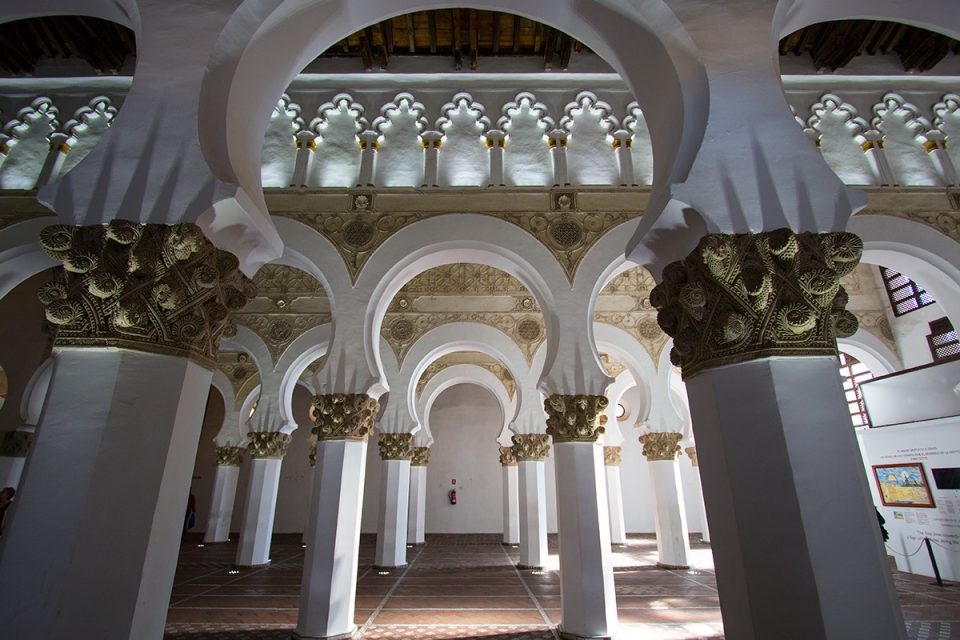 It barely takes an hour to get from Madrid to Toledo, but Castilla-La Mancha’s most beloved destination feels centuries away. Coined the “City of Three Cultures,” a stroll up from the magnificent Puerta del Sol to the city’s Plaza de Zocodover is a journey through 2,000 years of history shaped by Christian, Muslim and Jewish traditions, all of which blend into something quite unique.

One such example is the Gothic Toledo Cathedral built on the site of the former city mosque. Considered by many to be Spain’s most magnificent Gothic structure, its Mudéjar influences are still visible in the cloister. Its fame and historical importance mean there is a lot to see inside. Don’t miss the 13th-century rose window, the masterfully crafted five-story altarpiece, and the sacristy with its exceptional paintings by El Greco, Goya, Bellini, Rubens, and Titian. Not too shabby. 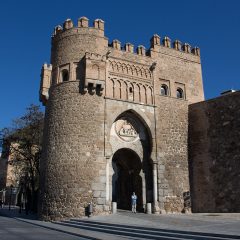 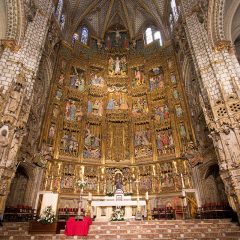 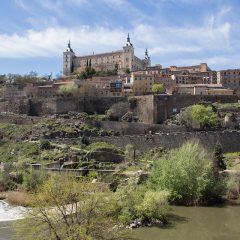 If you can’t get enough of the great painters, stop by the El Greco Museum in the city’s Jewish quarter. This part of town also boasts some of Toledo’s most important Jewish heritage, including the El Tránsito synagogue and the Santa María la Blanca church. The latter is an ancient synagogue turned church in the 14th century with stunning rows of Moorish-influenced arched pillars. Talk about a mix of styles and cultures!

Toledo’s living-museum feel also extends beyond its city walls. Grab a piece of Toledo’s handmade marzipan and make your way down to the historic Puente de Alcántara bridge. With its dramatic views of the Alcázar, it’s a great location for a family photo (or a selfie). 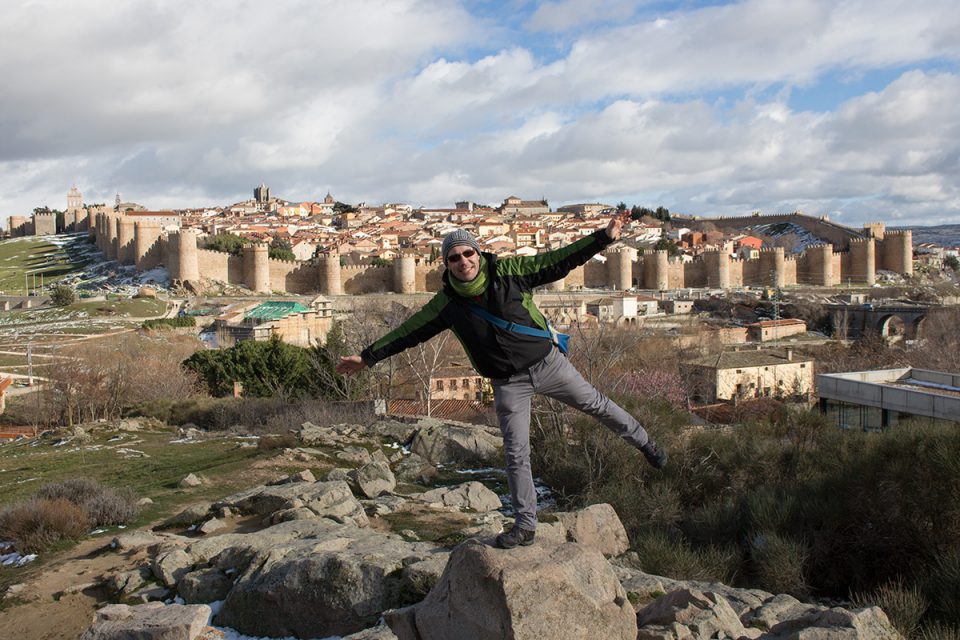 Ávila is another fairytale come true. Located in the rolling hills northwest of Madrid, it is best known for its classic medieval city walls and dramatic crenelated towers. Frequently listed among Europe’s best walled cities, Ávila easily matches the grandeur of rivals Carcassonne, Rothenburg ob der Tauber, and Dubrovnik. The Alcázar, cathedral and Bishop’s Palace are literally built into the massive fortifications. Best of all, visitors can climb the ramparts for gorgeous views of the old town and the countryside beyond. It’s these great walkable walls that made it my favorite day trip from Madrid. 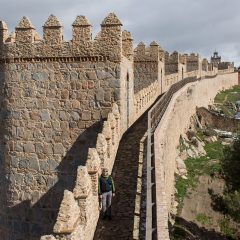 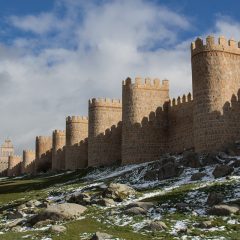 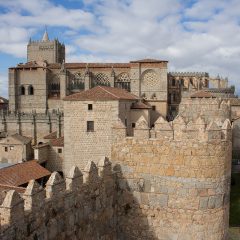 If you visit Ávila in winter, be prepared for the ramparts to be closed temporarily due to snow or ice. But never fear if this happens to you. Beautiful views of Ávila’s walls can be enjoyed from anywhere in town, and even from afar. In fact, the distant sight of the city walls might even be better than close-up views, so head straight to the Four Posts Viewpoint across the Adajato River for views that are nothing short of breathtaking.

While Ávila’s main focus is on the walls, many visitors in the know come for the famous Castilian cuisine. Some of the best restaurants offering local specialties can be found around Plaza Mayor. Try the “Gastronomical Triad” of judías del Barco (large haricot beans), chuletón de Ávila (veal chop) and Yemas de Santa Teresa (typical Ávila pastry). You won’t regret it. 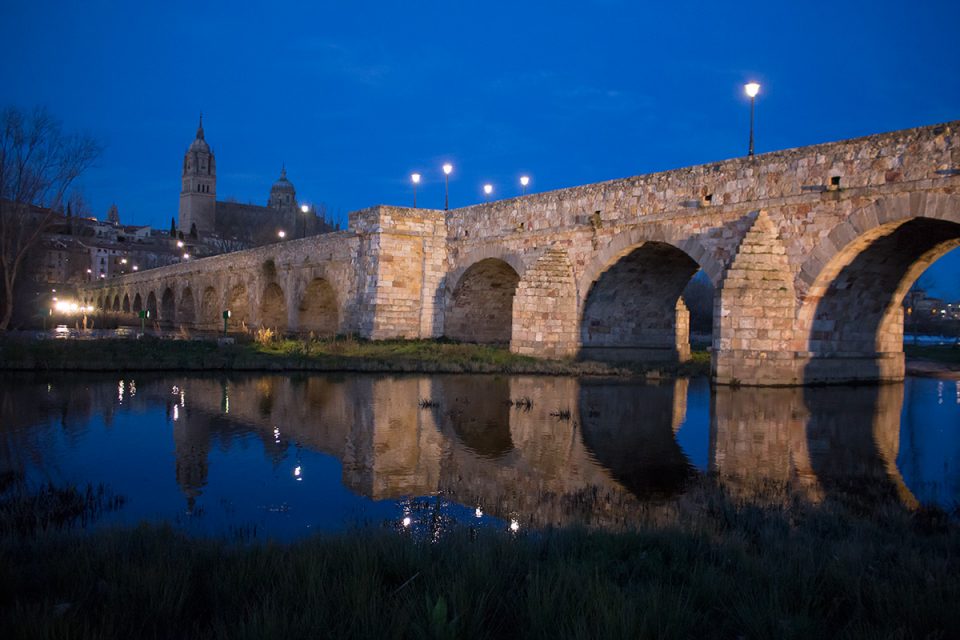 Salamanca is definitely not your average university town. Overflowing with opulence and overloaded with historical attractions, the town is a sea of magnificent plazas, cobblestone lanes, glorious convents, and awe-inspiring stone monuments – all while keeping up its lively youthful character with throngs of international students roaming the streets. You rarely find yourself using the adjectives Romanesque, trendy, medieval, edgy and Baroque to describe the same place. 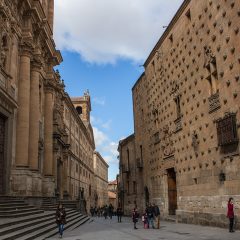 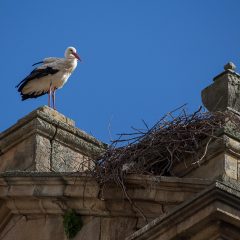 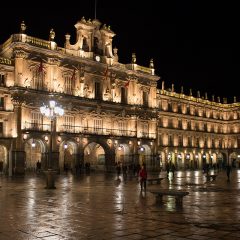 The biggest attraction of Salamanca is the town’s unique vibe. As you wander the old city, you stumble across hip little cafes and student coffee houses sandwiched between the ornate stone facades of the city’s ancient monasteries and towering cathedrals. Between architectural and cultural attractions, we highly recommend sampling (and buying) some pata negra. This high-quality Iberian ham literally melts on your tongue. You’ll have no problem finding some – shops abound. A word of warning though: pata negra is HIGHLY addictive. 😉

Of all the excursions, Salamanca is the furthest day trip from Madrid. If you can squeeze in an extra day, you should stay overnight to take advantage of the beautiful evening hours. Sunset is especially magical when Salamanca’s golden sandstone glows bright orange against the deep-blue sky.

3 responses to “The Five Best Day Trips from Madrid”