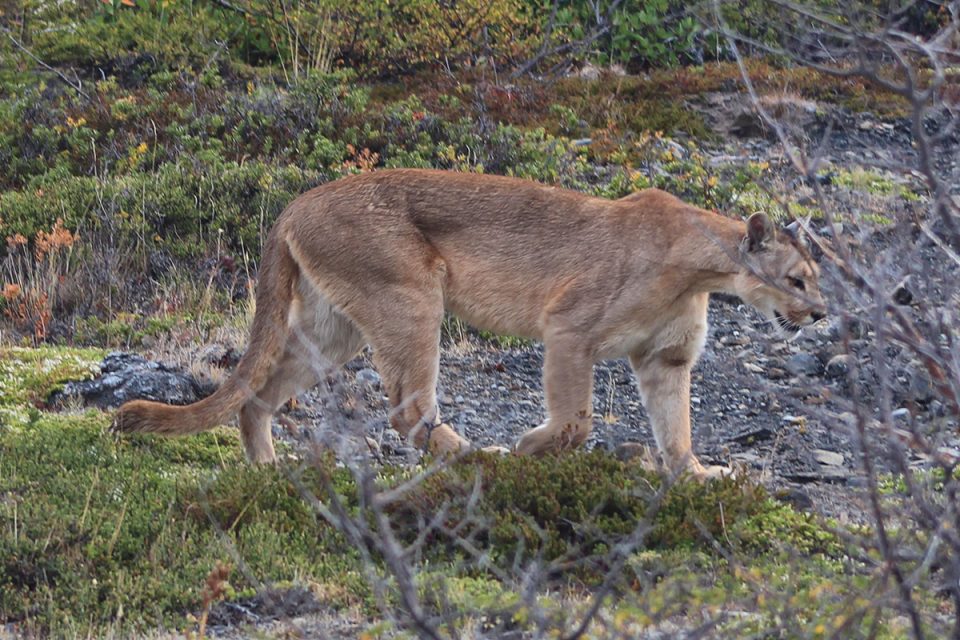 It was day seven of our eight-day trek through Torres del Paine National Park in southern Chile. My whole body hurt as I dragged myself slowly up the hill. We had been walking for several hours and I needed to rest. As we came over a steep ridge, I found the perfect place, a rocky ledge overlooking Lake Nordernskjöld and the green glacial valley before us. Unfortunately, two girls were sitting in our spot. Silently cursing them, I moved on while Tony suddenly stopped in his tracks.

“Thomas, look!” he whispered hysterically pointing at the rolling hills down by the water. I had no idea what he was pointing at, but I instinctively grabbed my binoculars dangling from my neck. “A mountain lion!” Tony blurted out. I almost started laughing.

“Yeah, right! Look again, that’s a tree trunk, anybody can see that,” I replied snarkily as I raised the binoculars to my eyes. Then I saw it, too. The light-brown cat just sat there, calmly staring at something in the distance… perhaps a delicious hiker. We were freaking out. FREAKING OUT! Our second Andean puma within a few months? We couldn’t believe it! During our Salkantay trek in Peru, we had seen the rear end of a puma disappearing into the bushes. But this, this was something else. Although the cat was quite a distance away, we had the perfect view through our binoculars. 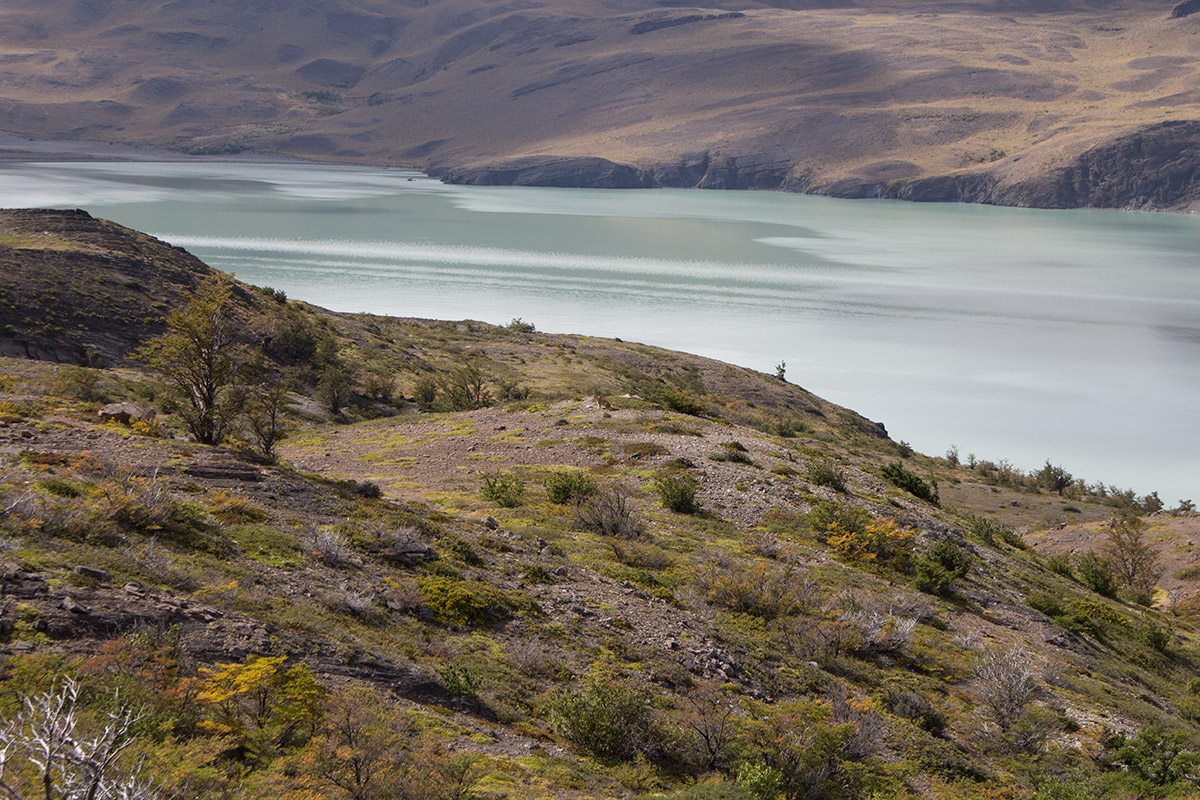 Can you see the puma, right in the center?

It was great as long as it lasted. After about five minutes, the mountain lion got up and started walking. Where was it headed? Was it going toward the trail ahead of us? Most people would have run the other way, but we quickly hurried along the path wondering if we could catch another glimpse. Adrenaline pumping, we stumbled down the hill along the narrowest of paths. Dense foliage pulled on our heavy backpacks slowing us down. We stopped for a moment to listen. I couldn’t hear or see a thing, not even another hiker. Clearly, we hadn’t really thought this through.

Huddled together, we moved on in a slow shuffle eyes darting in every direction. Just as I thought the walls of vegetation along the narrow path were closing in on us, we popped out into a clearing. A couple of hikers sat underneath a wooden sign indicating a shortcut to Chileno campground. When they saw us, they got up to leave.

I was just thinking about warning them when Tony blurted out, “Be careful guys, there’s a puma around here; we just saw it a few minutes ago from a viewpoint up there.”

“A puma? What?” they exclaimed in unison. We excitedly told them our story while scanning the landscape around us for any movement. We discovered the Chilean couple Helen and David were visiting from Santiago. Although they had done a lot of hiking in Chile, they had never seen a puma.

“I’m so envious,” Helen said, “or maybe not, it’s kind of scary,” she continued as the three of us sat down. Tony got up and walked off towards a giant rock in the distance, “I’m gonna climb up there, maybe I can see something.”

“Seriously? Be careful!” I yelled after him. 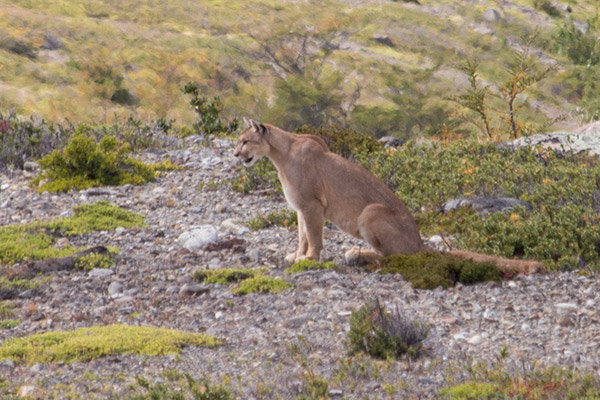 We sat talking as Tony climbed up on the rock in the distance. “Anything?” I hollered in his general direction. He shook his head. Suddenly, a look of shock and fear appeared on his face, he struggled to keep his balance as he stared behind us.

At that precise moment, ancient protective instincts caused Helen to spin around and gasp. Worried that Tony was about to fall off the rock, it took me a second before I turned to discover the puma approaching us from behind. It was only ten feet away. We all jumped up and faced the cat. It stopped and stared directly into our eyes. The moment seemed to last forever. The dark markings under its eyes were beautiful. It was large, but thinner than the mountain lions I had seen in captivity. Three or four seconds went by. Damn, where was Tony? Fearing that the cat might pounce, I raised my hiking poles like spears. It understood the gesture and continued past us down the path disappearing from view.

“Oh my god, where is it, are you okay, what happened?” Tony came running back completely out of breath. “Oh, you guys are so lucky, I can’t believe how close you were. Oh man, I’m so jealous!!!”

“No! I’m not going to shoot photos of you guys getting attacked by a mountain lion! Are you crazy?”

“I got one,” announced David as he presented us with his trophy shot, the lead picture in this post. 🙂 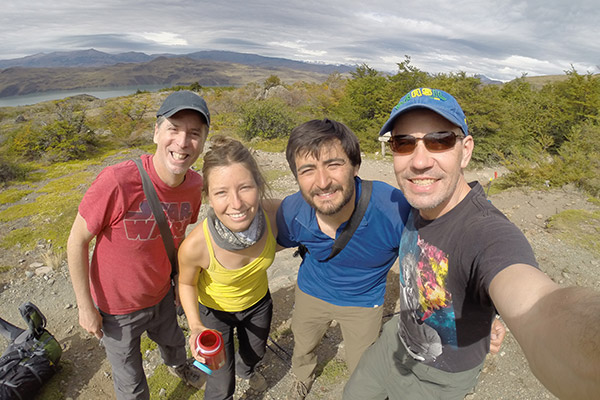 Our little group totally hyped after our puma viewing

Our next post on trekking Torres del Paine National Park is going to include a video, with clips of the puma. Make sure you come back to check it out.