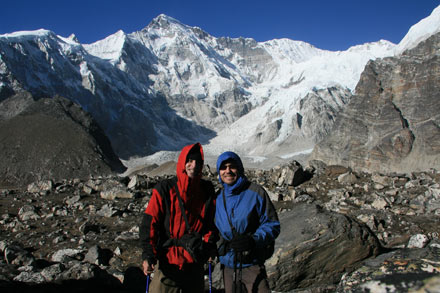 We both love Cho Oyu – from the Tibetan side and the Nepali side! For that reason, we decided to hike from Gokyo to Cho Oyu base camp, a very long 20-kilometer (12 mile) trek roundtrip through hills of glacial rubble along the Ngozumpa Glacier up past the fourth and fifth lakes towards the sixth lake region.

Few trekkers actually continue all the way to Cho Oyu because of the length of the trip and the remoteness of the location, but that didn’t stop us. Motivated by the mountain itself, we just kept plugging along until we finally got there. (I must admit we lost the trail several times along the way – there was some profanity involved!) 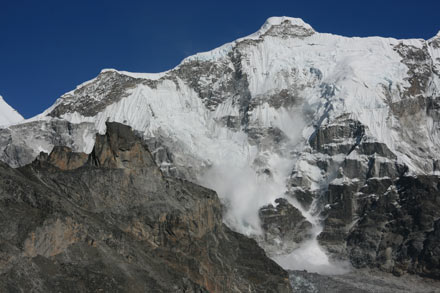 After hours of climbing up and down over the rubble, we finally made it to our destination only to be greeted with three spectacular avalanches: one off of the nearby Gyachung Kang and two off of Cho Oyu itself. The isolation and stunning landscapes made it all worthwhile.