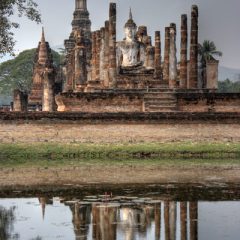 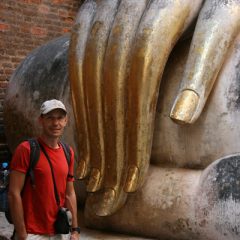 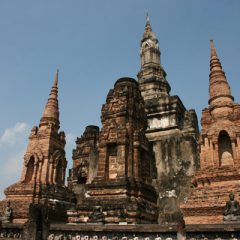 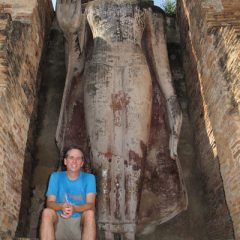 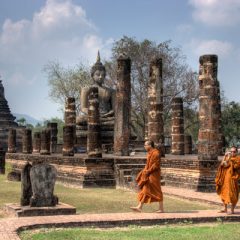 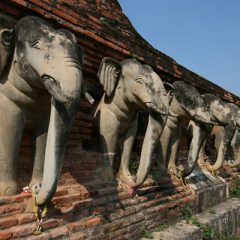 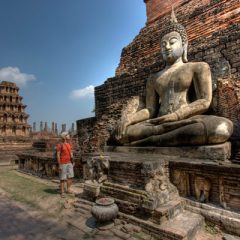 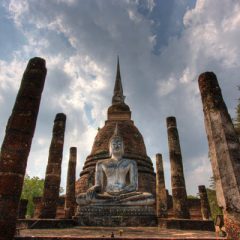 While there may be some debate among historians, Sukhothai is generally considered the birthplace of Thai culture. The sprawling Sukhothai Historical Park preserves what’s left of the first capital of Siam and makes for a leisurely day out biking through the ruins. The site features a series of crumbling monasteries, temples, stupas, palaces, and stunning Buddha statues as well as portions of the original city fortifications.

While not on the same scale as the Southeast Asian super-monuments of Bagan and Angkor Wat, Sukhothai is still quite impressive and rivals the grandeur of Ayutthaya. For its historical and cultural significance, Sukhothai has been declared a UNESCO World Heritage Site, and it’s definitely worth a day or two on the way north to Chiang Mai.

As with Ayutthaya, the Thai government has been playing around with ticketing and ended up with a rather absurd and impractical zone system. To make the situation worse, the current government has eliminated the combined ticket which requires visitors to buy individual tickets for each zone. Because the majority of the best preserved monuments are in the core zone, most visitors limit themselves to that single ticket. Despite the bureaucratic missteps, Sukhothai represents one of Thailand’s architectural and historical highlights. 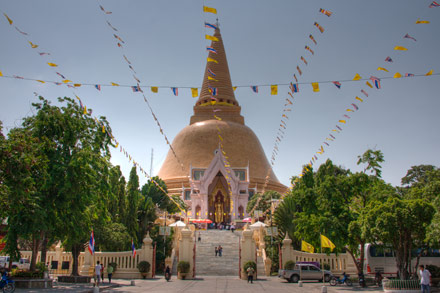 So what would Buddha think about all this? Somehow, I strongly suspect he wouldn’t care at all. However, I wouldn’t be surprised if END_OF_DOCUMENT_TOKEN_TO_BE_REPLACED

Another Day in Wonderland 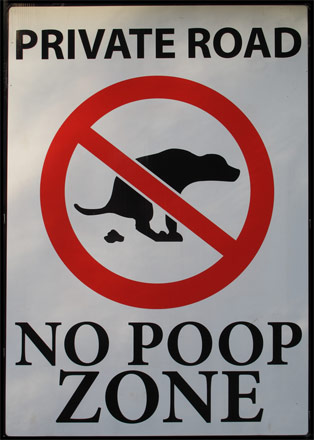 During our travels, I find myself constantly making references to Alice in Wonderland. I think one of the hardest things to convey to family, friends and readers is the disorienting cumulative effect of living in a surrealistic landscape of shifting cultural and environmental norms. Every day is another page in a nonsensical narrative with characters speaking backwards, bombarding us with riddles and inverted logic. Even a simple trip to Seven Eleven can be an excursion into the bizarre. And for some reason, I suddenly seemed to notice it.

I was on a mission to buy potato chips. I always have the same options, but at that particular moment in time they seemed odd: seaweed, grilled lobster, hot and spicy crab, hot chili squid…

Can’t I just have BBQ or nacho cheese?!

A single bag of “Salt and Sour” chips drew my attention; unfortunately, “salt and sour” were the only English words on the bag. As always, I analysed the bag’s pictures for clues. A bottle of vinegar, a lemon, what looked like a glass of orange juice, and a pile of rice. Hmmm. Well, at least it didn’t appear to contain any sea life.

Stepping out of the Seven Eleven, the everyday atmosphere seemed noticeably strange. A group of Nigerian gigalos END_OF_DOCUMENT_TOKEN_TO_BE_REPLACED

Is Thailand Worth It? 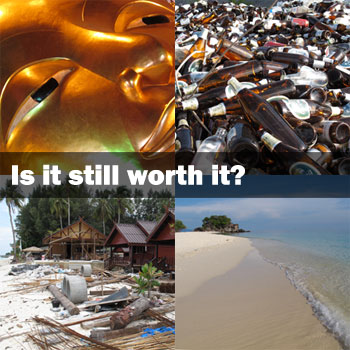 We’ve written many posts about Thailand describing reckless overdevelopment, pollution, instability and a host of other problems. After reading some of these descriptions, our readers might be wondering if Thailand is still worth it? It’s a legitimate question, especially for serious travelers.

The reality is that Thailand gained its reputation as an off-the-beaten track destination decades ago, famous for pristine beaches, authentic tribal culture and fascinating Buddhist heritage.

But during the last twenty years, Thailand has modernized and developed much faster than anyone could have imagined. While this modernization has brought about vast improvements in infrastructure and advanced the standard of living for the people of Thailand, it has also impacted the flavor of the country in many ways. But is the new Thailand just as enjoyable? END_OF_DOCUMENT_TOKEN_TO_BE_REPLACED

We have talked plenty about the tourism boom and overdevelopment in Thailand, but let’s be honest, there’s a reason why everyone wants to come here. And even though it can get a little crazy, we have managed to find relaxation on some of Thailand’s most beautiful beaches.

Some scenes in the video are well known destinations while others are isolated beaches we discovered while water-hiking. It’s all part of our ongoing quest to find the perfect beach. 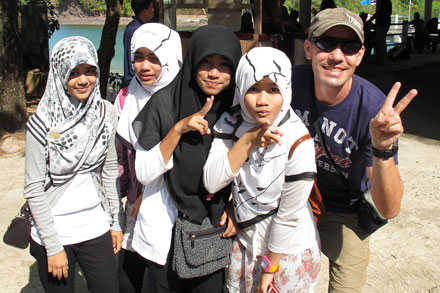 Although Tony mentioned growing conservatism among Muslim minorities in Southern Thailand in Burkas and the Art of Roti Canai, there’s obviously another side to the story. Young girls are still young girls, with or without headscarves. These girls were especially outgoing, stopping us to take our picture on Koh Tarutao. When we asked to take their photo, the girls struck a pose. Let’s just say there was a lot of giggling, and not just from us. 😉 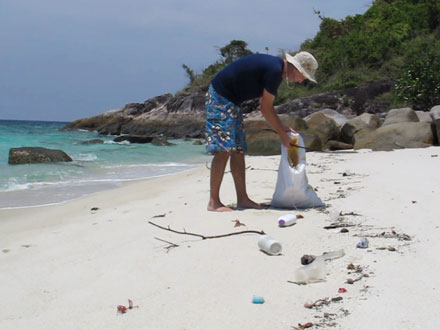 On our previous visit to Koh Adang, Tony came across a beautiful stretch of white-sand beach while water-hiking. (Clearly, he was ignoring rule No. 2 in our last post.) He couldn’t wait to go back and show me his discovery. Twenty minutes of walking and twenty five minutes of swimming took us to what he had perceived as paradise. As we climbed out of the water onto the beach, we found ourselves standing on a once stunning stretch of white-powder sand covered in garbage. How could this be? END_OF_DOCUMENT_TOKEN_TO_BE_REPLACED 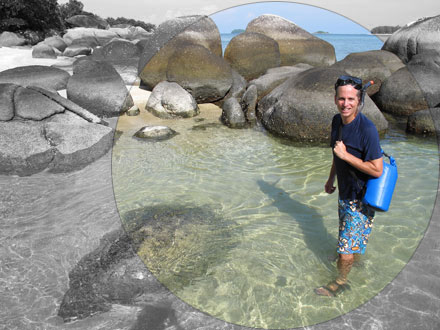 It’s no secret that we love nature. And if you haven’t figured it out by now, we aren’t huge fans of crowds of tourists lying on our beaches. (We’ve said it before, we’re beach snobs.)

But our pictorials and videos from Goa to Palawan often show stunning, empty beaches completely devoid of much of the overdevelopment we complain about ad nauseum. Where are we getting these pictures?

On occasion, we are able to rent sea kayaks to get off the beaten track. But more commonly, we must resort to what we have come to call “water-hiking.” We often pack our beach sarongs and our smaller camera into a lightweight, good-quality Sea to Summit waterproof bag and put that into one of the low-cost, heavier Asian knock-off waterproof bags available everywhere and start exploring the coasts. 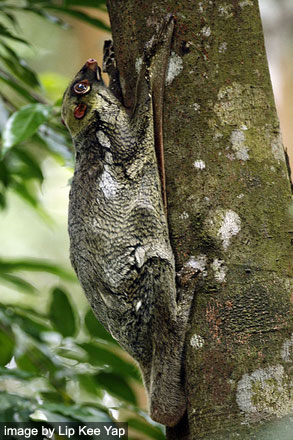 Well, they’re not lemurs and they can’t really fly, but they definitely are awesome! After almost two years in Southeast Asia, we’ve finally spotted two – count ’em two – Sunda flying lemurs here on Koh Adang. The amazing gliding mammals swooped down in front of us and landed on a tree not far from our bungalow. Their highly unusual gliding skills are a site to behold – almost worth the two-year wait.

We know the brainiacs who visit our site need more info on these unusual creatures, so here is a link to the appropriate Wikipedia article as well as a short BBC clip below. Watch them fly – it’s weird and wonderful!

That’s Nature for You

After braving the mass tourism and overdevelopment further north, we finally decided to retreat to Koh Tarutao National Park, our island hideaway in Satun Province.

This time, we went to Koh Adang, an island we explored on our previous visit, but didn’t write about. One of the island’s most intriguing features WAS a beautiful sandspit that had formed near the park’s visitor center. This amazing formation not only created an idyllic, protected pool of turquoise water, but the sand was so steep that you could literally jump off the beach into several meters of water. Fantastic.

I wrote “WAS” because the sandspit has been destroyed by the storms and rough seas that swept across Thailand over the last couple of months. BUMMER. Well, that’s nature for you. I guess we’ll have to content ourselves with beautiful beaches, lush jungle, and technicolor sunsets, instead.

For visitors thinking of going to Koh Adang now, this visit took place before the park closed on May 15, 2011. Koh Tarutao National Park will reopen after the rainy season in November.