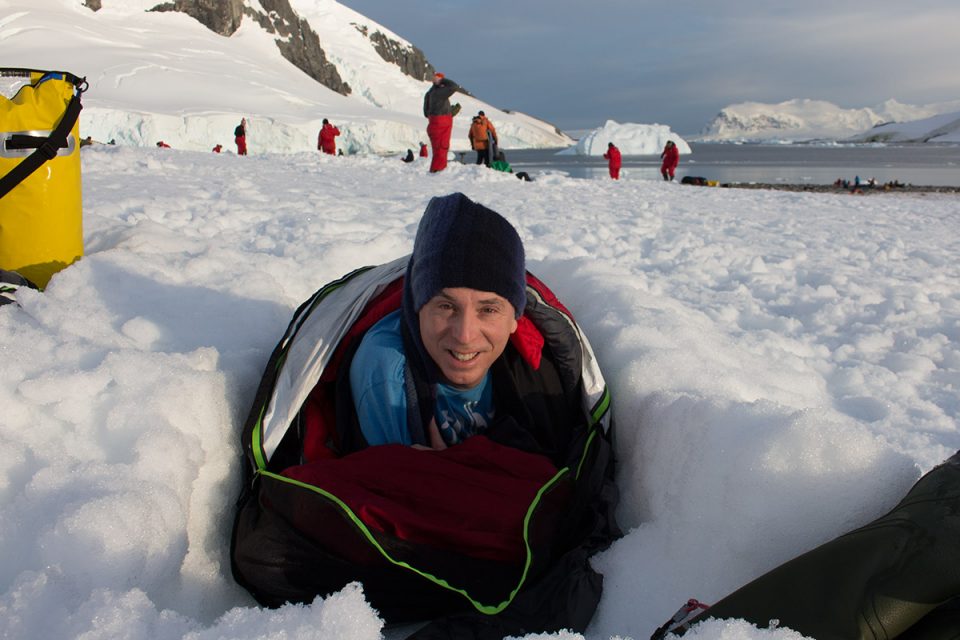 If there is one thing that’s guaranteed in Antarctica, it’s that there are no guarantees. We knew this when we booked our trip to the ice continent: all activities are very weather dependent. Mother Nature rules down here with a very raw sense of humor, and she sometimes likes to put humans in their place. Zodiac outings, landings, penguin viewing, hiking, every Antarctic activity listed in the brochures comes with an asterisk next to it clearly adding “subject to weather conditions.”

Everybody on board knew this, and we knew the most weather dependent activity of them all was camping in Antarctica. There were two designated days where the overnight camping excursion was possible. When we were told camping was not possible on the first night due to wind and rain, we all held our breath and prayed for Mother Nature to cut us some slack. Those prayers were answered the second night when it was announced that the camping excursion WAS ON! Cheers went up around the ship. 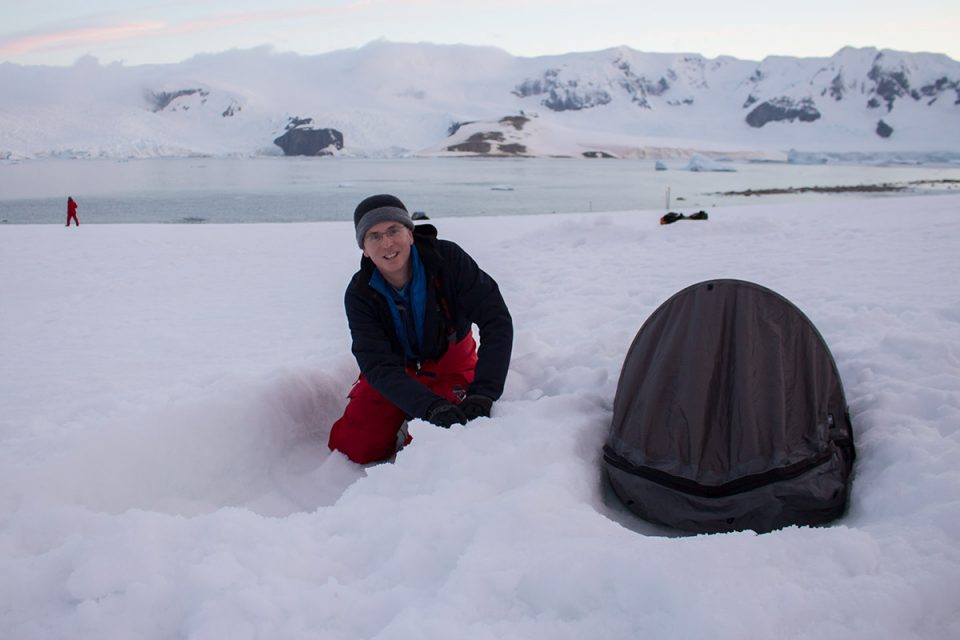 The sunny skies and total lack of wind really did feel like a gift from the gods as we set out to make camp on a sliver of flat land on Rongé Island. Incredibly, over half the passengers on board chose to do the camping excursion. That is a testament to the adventurous nature of the people who choose to come to Antarctica.

The subtly sloping campsite was backed by a huge cracking glacier and stony peaks. Penguins waddled along the shore and a group of Weddell seals eyed us lazily as we stepped out of the zodiacs. The sprawling snow-covered slope provided plenty of space for everyone to spread out and set up camp without feeling cramped or hemmed in. 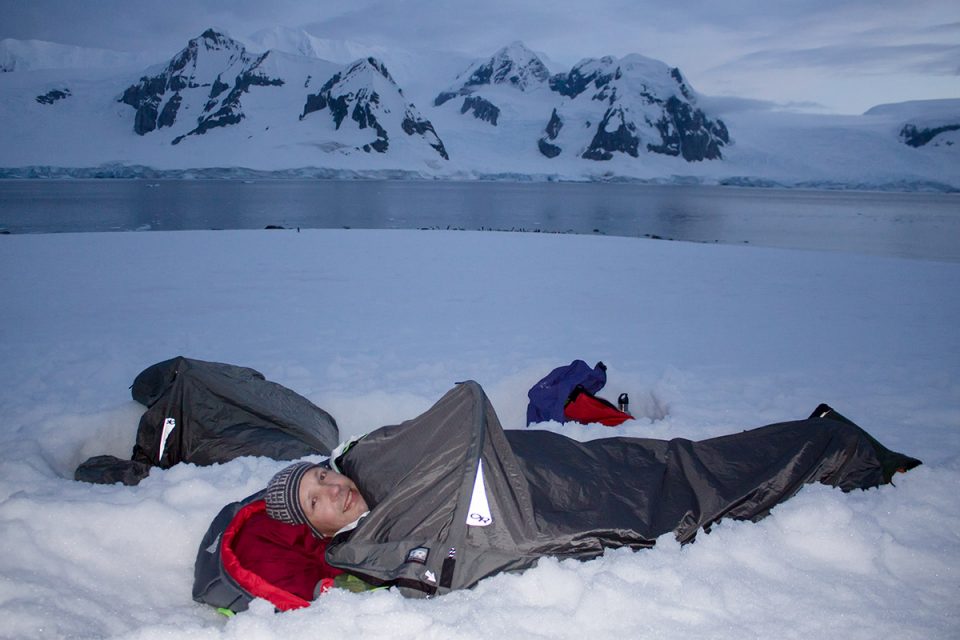 Camping in Antarctica is most commonly done in bivy bags rather than tents so campers can get that full-on Antarctic explorer vibe. Thomas and I found a nice stretch of slope just above the Weddell seals and we started digging our shallow graves… I mean ditches for wind protection… and then laid out our sleeping pads, bivy bags and -17 C sleeping bags. We were so enthusiastic about our camping experience that we dug both our wind ditches by hand before we realized that One Ocean had provided shovels for campers to dig with. Oops.

As we were laying out our sleeping bags, a huge cracking sound drew our eyes up to the glacier behind us just in time to witness a huge piece of ice breaking off and falling to the ground. A small wall of ice obscured the point of impact and all the campers held their breath wondering if an avalanche of snow and ice was headed our way. Nothing. (The next day as we returned to the ship, we could more clearly see the small ravine which separated the glacier from the campsite – whew!) 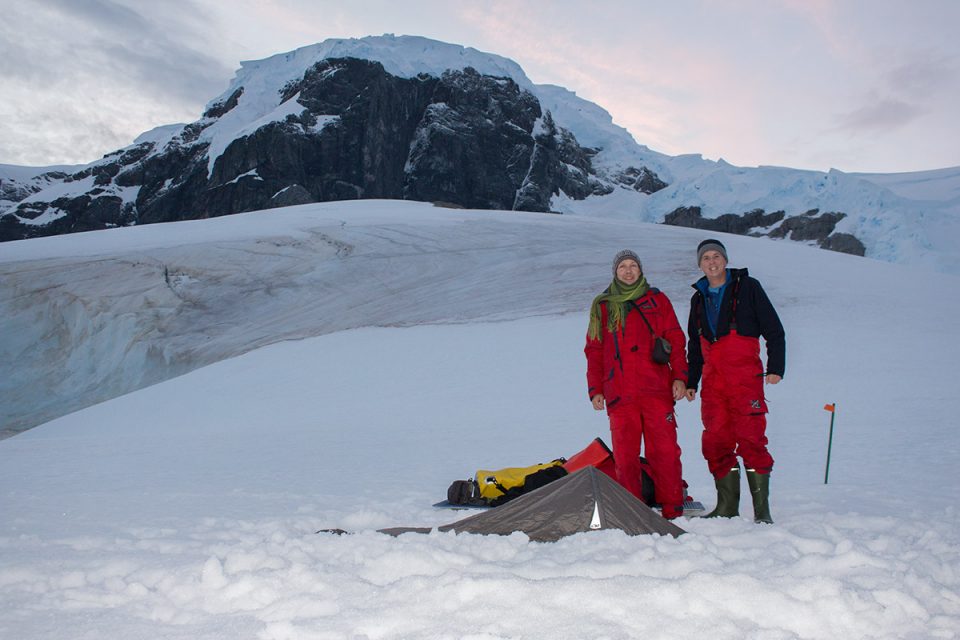 Sitting on the edge of our camp in the pinkish midnight sun scanning a horizon of icy wilderness was, perhaps, one of our most perfect moments ever. The sounds of cracking ice, wavelets rolling up onto the rocks, whales exhaling as they surfaced, and penguins squawking in the distance was pure magic. Far in the distance, a massive whale tail lifted out of the water and sank below the waves. A seal rolled over and yawned suggesting we go to bed.

I could claim that camping in Antarctica was one of the most extreme or intense things we’ve ever done, but it wasn’t. (We’ve had much rougher, colder nights in other locations.) It was, however, one of the most magical, meaningful things I’ve ever experienced. Lying in my surprisingly comfortable snow-ditch listening to the sounds of Antarctica felt like an exceptional privilege. I slept like a baby… until about 5 AM. That’s when I woke desperately having to go to the bathroom. 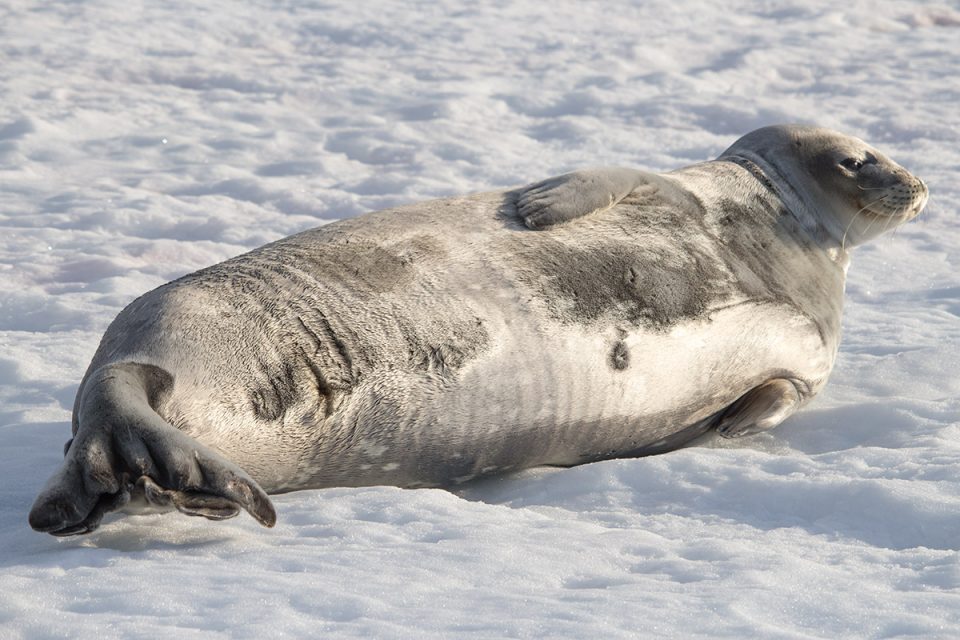 In most locations, you could climb out of your bivy bag and pee behind a tree, but for environmental reasons, it is strictly prohibited to relieve yourself anywhere on land in Antarctica. One Ocean does bring a portable barrel toilet, which they humorously call “Mr. Yum Yum,” to the campsite, but Thomas and I had very unstrategically set up camp about as far from Mr. Yum Yum as possible. I really had no desire to climb out of my warm sleeping bag and hike through the snow at 5 AM.

And just when I thought my bladder was about to burst, the most extraordinary thing happened. I started to hear bizarre, electronic sounds, almost like the lasers in Star Wars. Weird, artificial electro-warbling echoed off the icy slopes and glacial walls. It was the totally unique singing of Weddell seals, unlike any animal sound I had ever heard before. It was so surreal, I completely forgot my bladder until we returned to the boat.

Play video to hear the amazing sound of Weddell seals

The opportunity to camp for a night in Antarctica will definitely go down in our travel history as one of our most valued and unique experiences. I would HIGHLY recommend that if you do an Antarctic cruise and you have the opportunity to camp, go for it. But this is one situation where I am afraid that the most you can do is choose an operator, such as One Ocean, that offers camping, and then cross your fingers for good weather. You can only half plan this part of your Antarctic experience… Mother Nature will plan the rest for you. 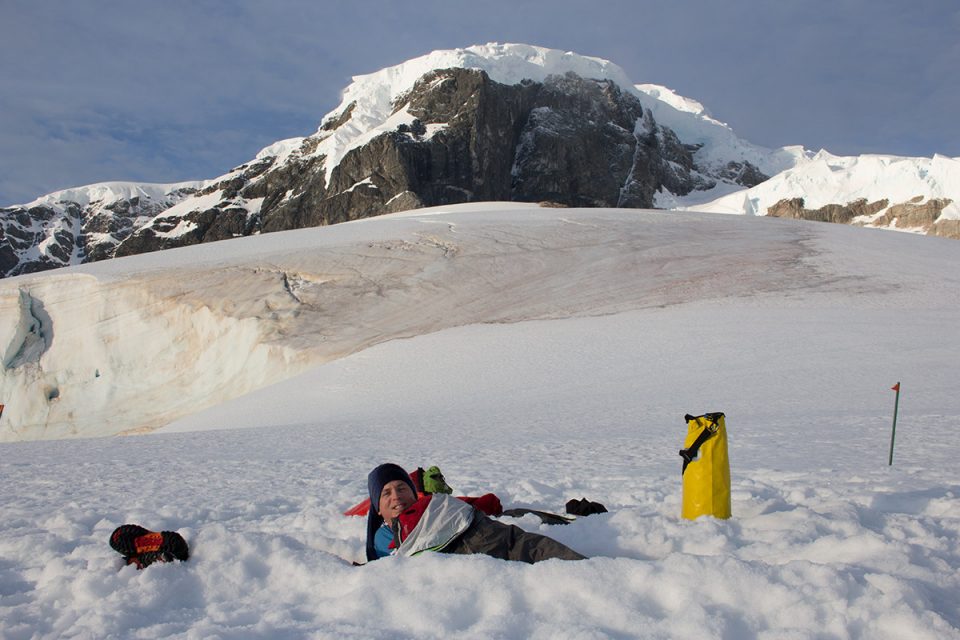 Disclosure: We received a discounted media rate on our One Ocean Expeditions cruise. However, all of the opinions expressed here are our own. As of Oct. 31, 2019, according to several news sources, One Ocean Expeditions has experienced financial challenges resulting in trip cancellations and company restructuring.

17 responses to “Camping in Antarctica”