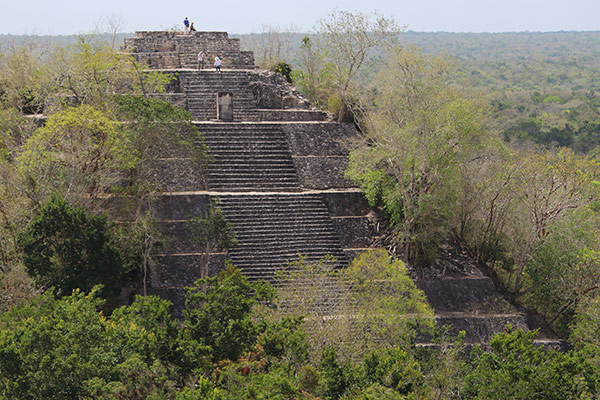 In the past, we’ve often been criticized for being overly critical in our posts. Some have suggested that we long for a level of authenticity and discovery that no longer exists in the 21st century. Well, we maintain those absurd standards, so that when we get to a place like the Calakmul Biosphere Reserve, we can say, “THIS PLACE IS PHENOMENAL!” and it means something. This is everything we love all wrapped up into one destination: enormous Mayan pyramids, a vast carpet of jungle, and wildlife everywhere.

Just driving into the reserve is a major adventure. Starting from the remote village of Conhuas, visitors make their way along a 60 km stretch of majorly potholed road through dense, spectacular jungle. People who rush or arrive late in the day are making a major mistake; the drive in is one of the highlights. We saw dozens of beautiful ocellated turkeys and even caught a glimpse of a jaguarundi (not a jaguar, a smaller cat). And there’s birdlife everywhere. 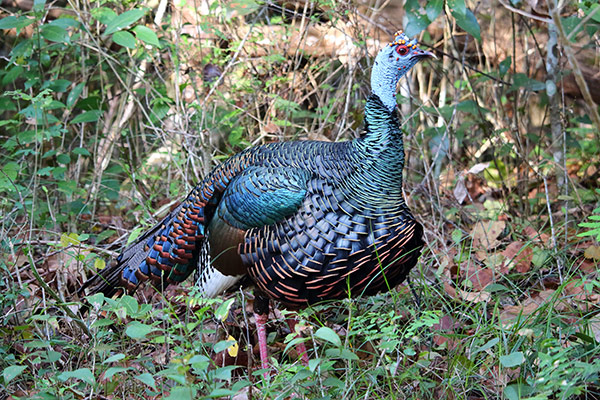 It took us almost two hours to get to the ruins (we like turkeys). But five minutes after our arrival, we encountered our first troop of spider monkeys. A hundred yards further on a coatimundi. Howler monkeys roared in the distance. And then, the peculiar frog-like sound of a toucan. Phenomenal.

We inched our way to the central square of the ruins; I literally had to drag Thomas forward, or he would have spent all day turning over leaves and photographing exotic insects. But once we got there, all eyes were on the towering Structure II, a mammoth multi-level pyramid unlike anything we had seen before. THANK GOD visitors are allowed to climb it or I would have had to break some laws. 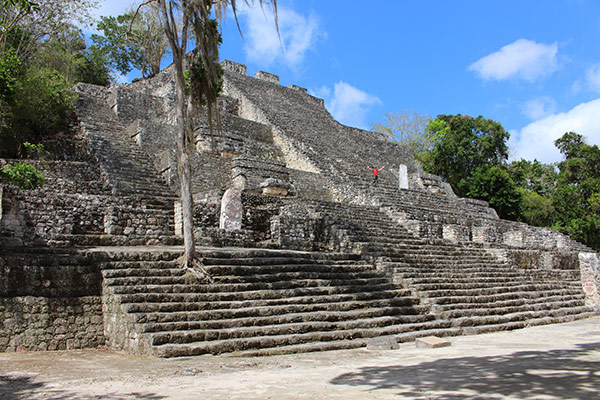 One of the most massive Mayan structures ever built (in terms of width-height combo), Structure II feels like something out of a cheesy ’20s lost world novel… but it’s real. Climbing it is spectacularly risky and rewarding. At the top of its steep stairs, visitors discover a second level revealing a huge pyramid sitting on the pyramid (aerial image). Structure II immediately made my list of world’s coolest buildings. At the top of the second-tier pyramid, visitors revel in an uninterrupted sea of green in all directions. To the south, the even higher Structure I pops its head out of the jungle. It really doesn’t get better than this.

Although largely unknown to travelers, Calakmul was one of the Mayan world’s greatest cities, some believe it may have even been larger than Tikal in Guatemala. While the area currently open to the public is not as large as Tikal, the monstrous pyramids and isolated setting may make it a more enjoyable visit for those who like their “lost cities” for themselves. Indeed, it really is hard to find an experience like this in 2014, especially one that you can drive to. In many ways, it may have meant even more to us than other visitors because we have traveled so extensively and we realize what an extraordinarily precious opportunity Calakmul represents. Beyond the ruins, the surrounding Calakmul Biosphere Reserve offers Mexico’s best opportunity for wildlife viewing. If you are an Indiana Jones wannabe, go fast! See travel tips below the pics. 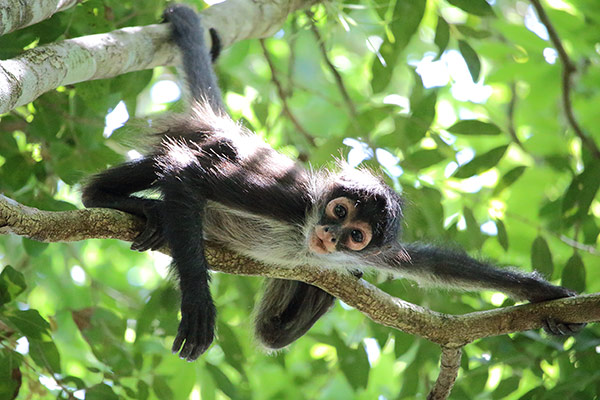 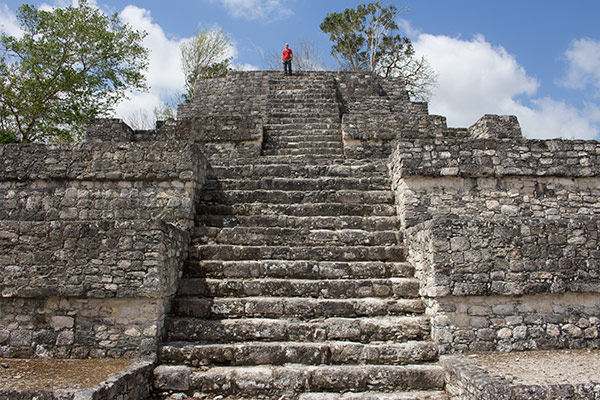 Thomas stands on the second tier of Structure II 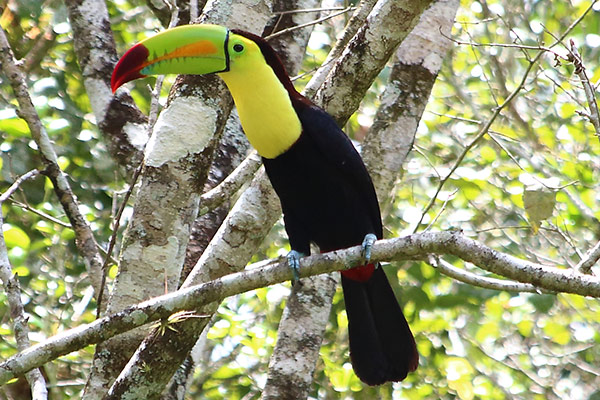 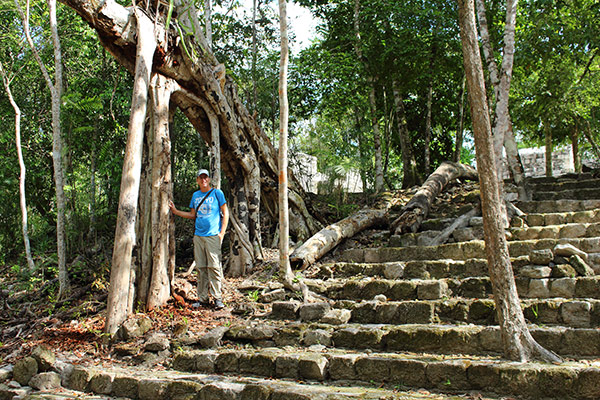 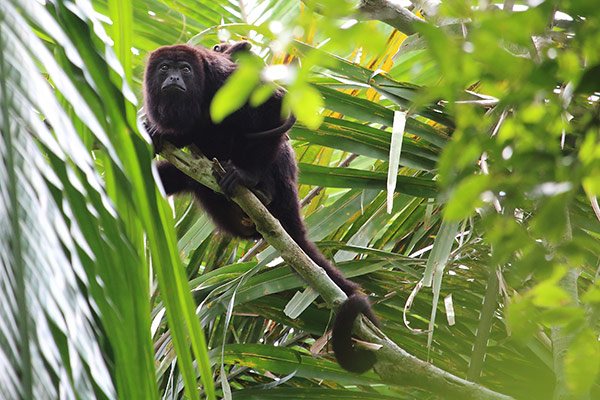 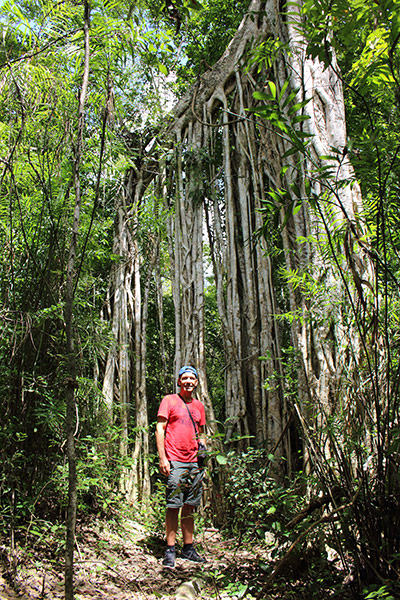 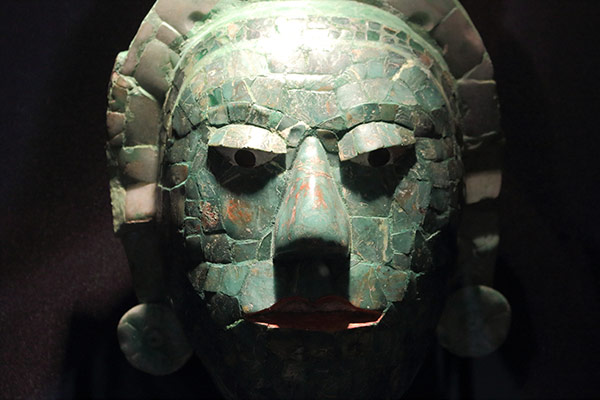 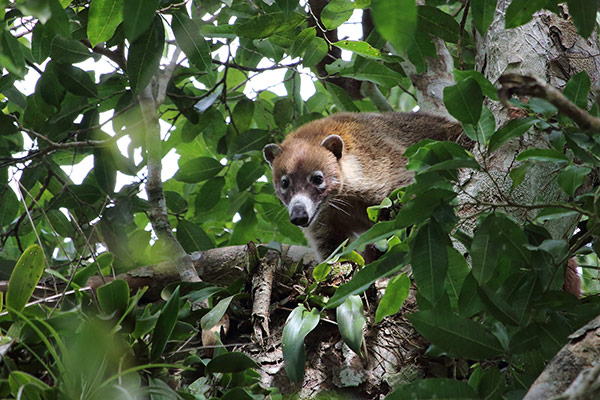 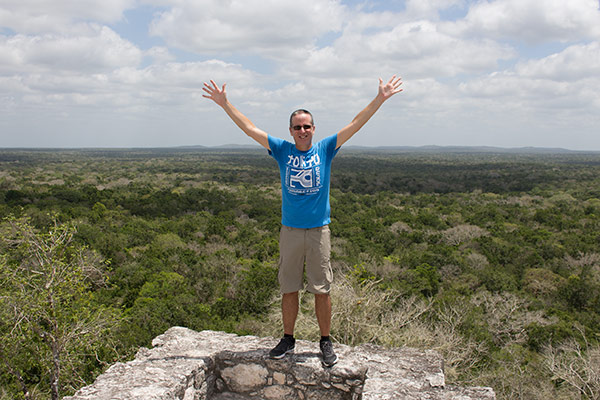 Tony on Structure I, the actual tallest Mayan pyramid in Mexico 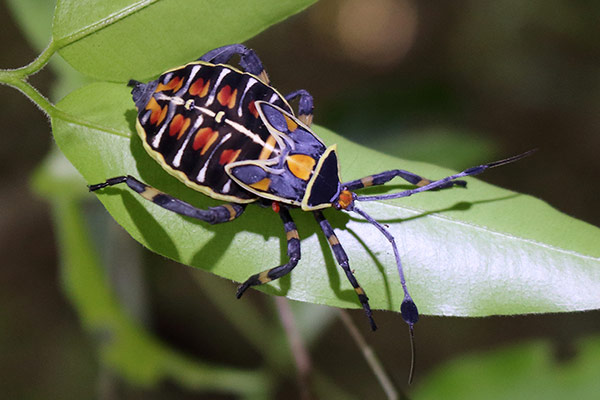 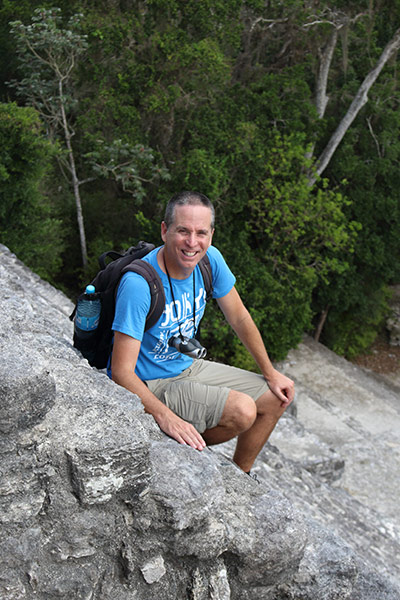 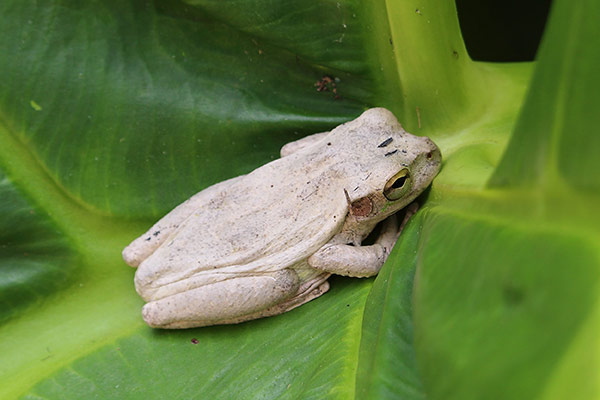 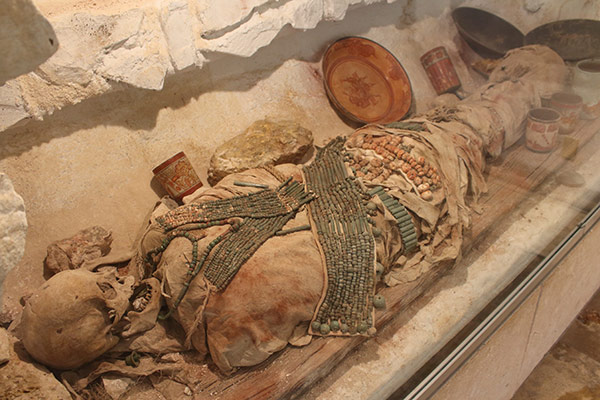 Mummy from Calakmul on display at Museo Arqueologico de Campeche 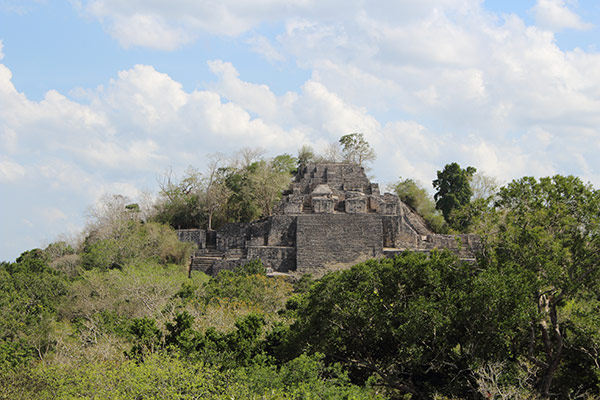 Structure II rise out of the jungle 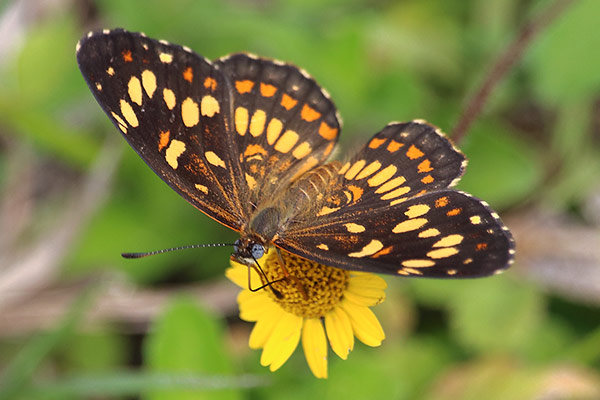 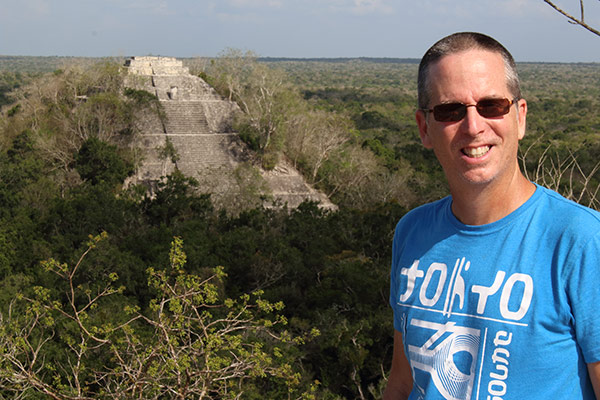 Tips for Visiting Calakmul and the Surrounding Area

To be blunt, someone who seems like a frustrated golf course designer is sweeping through the Yucatan Peninsula “upgrading” many of the archaeological sites with paved walkways, purple yuccas, and signs saying “Don’t Climb”. Uggggh!!! In other words, get to Calakmul fast. This person has already hit many of the remote sites, and it sure doesn’t feel like an upgrade to us. As of May 2014, most of the sites around Xpujil had not been affected. We heard many rumors that there may even be an across-the-board ban on climbing all pyramids throughout the Yucatan Peninsula in the near future. (No, say it ain’t so!!!)

If you want to see wildlife, you have to look for it. We saw several groups of spider monkeys and a couple glimpses of howlers, but the remoteness of Calakmul means that animals are still relatively shy, so you have to be quiet and keep your ears open. Also, before you go, learn to recognize the unique sound of a toucan to help you locate them. And if you want to see wildlife on the road in, try to be the first car through the gates. If you end up with a car in front of you, pull over and wait a few minutes to let them move on. Within a few minutes, that wildlife will start coming back out onto the road.

To visit Calakmul (and many other remote sites near Xpujil), you really need a car. You could hire a taxi in Xpujil, but that will be expensive and rushed. It’s best to plan a full day for Calakmul starting in Xpujil or Conhuas (wildlife enthusiasts and birders might want more). It takes longer than you think to drive in and out. The speed limit on much of the park road is 30 km per hour. Speeding is a BAD idea because of the potholes, blind curves, and wildlife. For those who want an early start and don’t want to stay at the expensive Hotel Puerta Calakmul, simple bungalows (300 pesos) with loud roosters are available in Conhuas.

For ruin junkies Becan, Balamku, Chicanna, Hormiguero, Xpujil, Dzibanche, Kohunlich are all great. Hormiguero is also great for wildlife. It appears that Rio Bec is now easier to visit independently, but we discovered that too late. The back road 269 from Xpujil via the Chenes sites to Campeche is currently in VERY bad condition with massive potholes, but offered some great wildlife including turkeys, two huge snakes (not pythons), Brocket deer, and great birdlife.

As with many larger Mexican archaeological sites, Calakmul has an incomprehensible multi-ticket system which invites complaints from visitors. Here’s the breakdown:

Let us know if it changes in the comment section below.