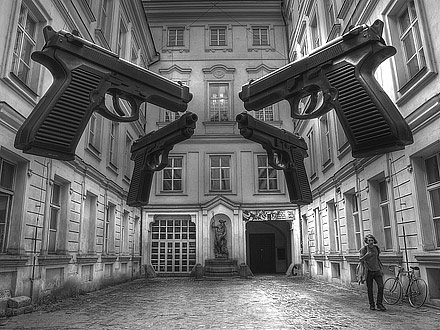 As I mentioned in the last post, Prague has not lost its artistic soul; Bohemia still very much lives up to its name. True, the once plentiful galleries devoted to Eastern Europe’s cutting edge art scene are a little thin on the ground these days and Prague’s counter-culture edge has been a tad dulled by commercial interests.

But Bohemians continue to fight back with thought-provoking artistic statements meant to tear holes into that thin veneer of tourist kitsch. And those statements are not hard to find. Car-sized pistols suspended mid-air in a silent Baroque courtyard draw visitors into the AMoYA, the Artbank Museum of Young Art. Girls in gas masks greet visitors as they enter over a street cobbled in worn wooden blocks. 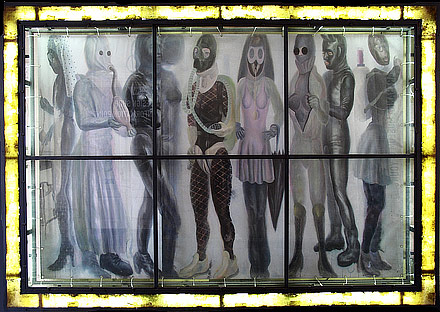 Art is everywhere. From surrealist statues like the Franz Kafka monument on Dusni Street to Gehry’s Dancing House. Even a casual stroll through the Lucerna Arcade reveals the hilarious statue of St. Vaclav riding his dead horse upside down. Monumentally hilarious! And the turn-of-the-century arcade itself, home to Bohemia’s first cinema, is an Art Nouveau masterpiece in its own right. 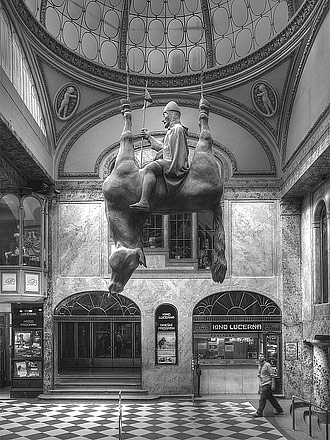 That’s part of what makes Prague so fun. Locals have an artistic flair… BUT they have that tongue-in-cheek sense of humor that means they do not take themselves too seriously. Where else could you find a row of lemon-yellow penguins backed by a millenium of architectural history. Now that’s the definition of Bohemian! 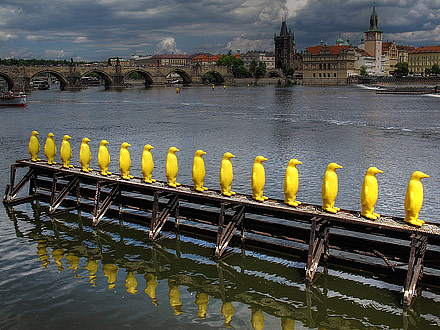 The penguins were so thought-provoking, I had to find a nice place to sit and contemplate their meaning. Perhaps, in the shade of one of the monstrous metallic babies crawling along the banks of the Vltava. 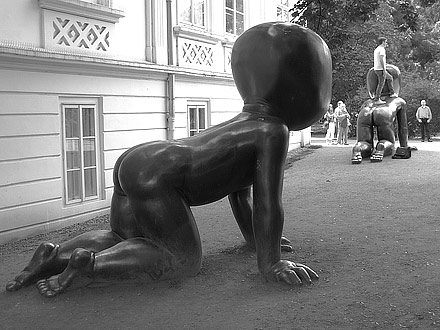