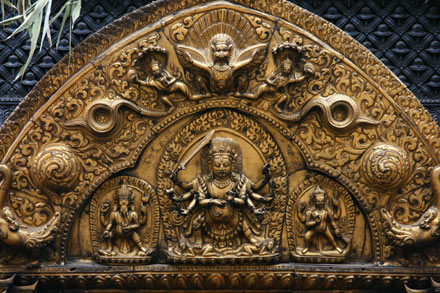 We left India screaming our lungs out at the Jeep driver who had been racing one of his buddies on the busy road to the border. As we were stepping over the invisible line into Nepal pursued by Indian rickshaw drivers and touts, the Nepalese border officials welcomed us with a big and knowing smile. It was good to be home.

Unfortunately, the ugly reality of bureaucracy quickly caught up with us when we went to renew our Indian visa in Kathmandu. After the ordeal of getting our first visa, this wasn’t something I was looking forward to.

Meaning well, the embassy had installed a “proper” numbering system in the meantime, but with the electronic display showing non-existent numbers and windows (there was no “Window F”), most tourists and embassy employees were left utterly confused. The situation quickly deteriorated into survival of the fittest.

But the real challenge started when we were told we could only get a 3-month visa. For some bizarre reason, the Indian Embassy in Kathmandu would not grant a 6-month visa to those who came back to Nepal for a renewal. Because we haven’t seen the north or the south of India, 3 months just wouldn’t cut it.

So, we had to talk to the big boss. After making our case and repeatedly praising India, all puppy-eyed, there was a long pause before the visa master started venting about everything from Russian prostitutes to dope-head Israelis flooding into India. Then he launched into a tirade on how difficult it was for Indians to get a visa for the United States.

Clearly, the man had issues. He just couldn’t understand why everyone would come back to Nepal for a visa with countries like Pakistan, Bangladesh or Sri Lanka around (none of these countries are really good options with Pakistan and Sri Lanka politically being on shaky grounds and Bangladesh being flooded by the monsoon rains this time of year).

In the end, we got our 6-month extension but only after we promised we wouldn’t come back to Nepal to apply for a third Indian visa.

How ironic is it that we ended up begging to be let into a country which we had just fled in disgust.