“Thomas, I think I just saw a rat!” I screamed as I squinched my eyes up to see through the mosquito net, “Something is moving in the rafters.” 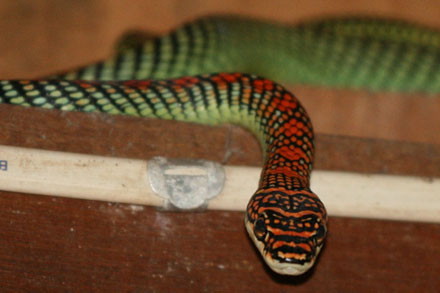 Snake #1 stares down at me

Thomas was busy brushing his teeth in our super-glam outdoor jungle bathroom in Khao Sok National Park, and I was too lazy to look for myself, so I just ignored the movement until the distinct slithering on the wall became too obvious to ignore. Damn, I thought to myself, another snake.

But I was wrong, it was two snakes. Two four-foot green snakes with beautiful red patterning along their backs. Clearly, Mother Nature had it in for us since I called her a bitch.

We brought in reinforcements – or more precisely, an old man with a long bamboo stick. I had had my fill of snake chasing in Koh Tarutao, so this time I thought I would let the “professionals” handle the problem. I moved outdoors to our terrace to take in the river views, a troop of long-tailed macaques monitored my every move, hoping for food.

In the background, I could hear the old man beating the hell out of something and Thomas yelling END_OF_DOCUMENT_TOKEN_TO_BE_REPLACED 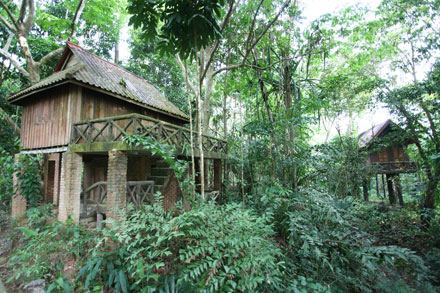 Wanting to shake it up a little and take a break from beach life, Tony and I have taken a few days to explore the jungle-covered mountains of Khao Sok National park. Considering the close proximity to touristy Phuket, the park seems surprisingly quiet. Obviously, beaches take precedent over rain forest in Thailand. Great for us!

What adds tremendously to our jungle experience here in Khao Sok is staying at Art’s Riverview Jungle Lodge. Unlike many of the other lodges, Art’s really feels like END_OF_DOCUMENT_TOKEN_TO_BE_REPLACED 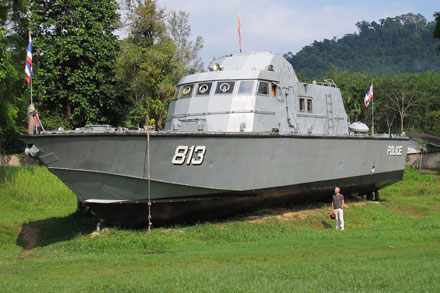 It’s a bizarre site, a Thai navy battleship sitting stranded in grassy fields one kilometer from the coast. Perhaps the most poignant visual testament we’ve encountered to the power of the 2004 super-tsunami that swept across the Indian Ocean.

Khao Lak was the area hardest hit in Thailand. 5,395 people are confirmed to have died in Thailand; more than 4,000 of those people died in and around Khao Lak. (In reality the death toll is END_OF_DOCUMENT_TOKEN_TO_BE_REPLACED

From Bleaching to Beaching in Khao Lak

We came to Khao Lak to dive the world famous Similan Islands. But plans change. We were willing to pay the high prices for a live-aboard trip to the celebrated dive destination, but when one local dive operator commented that viewing the reef system made him want to break out in tears, we decided to keep our cash. The wave of coral bleaching that swept through the Indian Ocean in 2010 has hit Thailand’s Andaman Coast extremely hard. Global warming sucks!!! 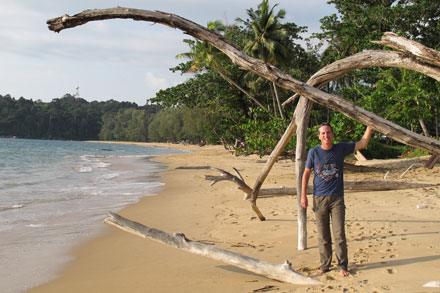 Instead of diving, we enjoyed long beach walks along Khao Lak’s stunning coast. We must have walked twenty miles of beautiful golden sands. And although this destination is by no means undeveloped, there is plenty of room for everyone. If you walk far enough, you can have a glorious stretch of tropical paradise all to yourself. Just don’t look underwater. 🙁

Well, here’s another reality check for travelers looking for a bit of atmosphere. Khao Lak is littered with signs for the Jedi Restaurant, which appears to hover effortlessly above the beautiful waters of Khao Lak. A closer inspection of the signs reveals a little bit of photoshopping, which we assumed was to make the water look more attractive.

It turns out that the Jedi END_OF_DOCUMENT_TOKEN_TO_BE_REPLACED

Thais celebrate their New Year’s Day with quite a splash. While Chinese New Year centers around food, Songkran is all about throwing water on friends, family, neighbors, or unsuspecting passers-by. Watery street battles with hoses, water guns, buckets, and paper cups take place during the hottest part of the year, which makes the ice-water ammunition all the more painful. (Although, luckily, not nearly as painful as Holi in India.)

We’ve put together a short video of the Songkran celebrations in Khao Lak to give you an idea of the one-day spectacle. Keep in mind when visiting Thailand that Songkran can last up to a week in the northern provinces. That’s a lot of ice water down your shirt!

For culture buffs, there’s a much deeper meaning behind Songkran. Traditionally, water used to clean Buddha statues on New Year’s Day was gently poured over family members to show them respect and wish them good fortune. This tradition has obviously morphed into what Songkran is today: a wild water battle.