The rains have started once again. But we don’t mind. With ever changing skies, ominous clouds and frequent downpours, the wet season provides great opportunities for more dramatic photography. Tony took this flash photo in the bay of Port Barton to capture an incredibly surreal moment in time. 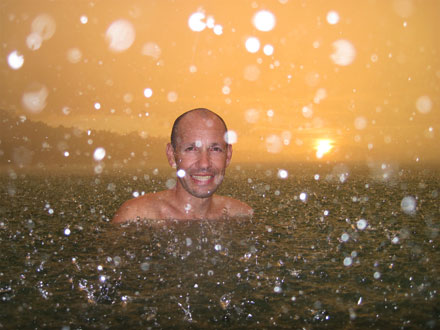 While watching the sunset in the warm waters of the shallow bay, it suddenly began to rain heavily. As the sun was setting, the low, dark-grey clouds started glowing bright orange and yellow, which was reflected in the choppy water. It was like sitting in a gigantic fireball with the sprinkler system on. Completely unexpected and like nothing we had seen before, this experience will go down as one of our greatest monsoon moments. 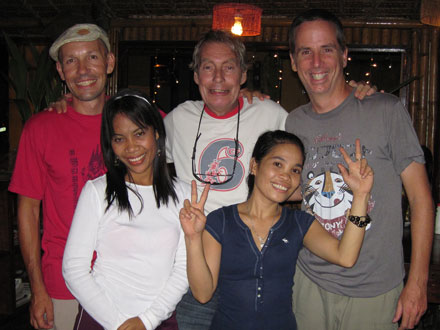 Before leaving El Nido, we have to mention Squidos, our absolute favorite restaurant. (In all honesty, it’s the only restaurant we’ve eaten at). The French owner Jean-Marc and his Filipino wife Narcel have quickly included us in their circle of friends, and eating at their restaurant feels more like meeting old friends over a home-cooked dinner.

The food at Squidos is simply fantastic. And it’s no wonder they serve killer meals considering Narcel’s killer instincts. This woman can dish it out. Anyone who can get away with – well, not murder – but with END_OF_DOCUMENT_TOKEN_TO_BE_REPLACED

The Beach by Alex Garland

Before we leave El Nido, I thought I should mention one little relatively unknown tidbit on the region. It is believed that Alex Garland based his novel “The Beach” on tiny Secret Beach hidden on the west coast of Matinloc Island. Many assume his perfect beach was a reference to the beach backing Maya Bay on Phi Phi Le in Thailand, especially since his famous novel was set in Thailand. Moreover, a computer-enhanced version of Maya Bay was used in the film version of his novel.

But many people do not realize that Alex Garland spent an extended period of time in the Philippines before he wrote the famous book. And it’s rumored that Alex himself has admitted the beach he was describing was indeed in the Philippines. If that’s true, Secret Beach must be the legendary backpacker hideout.

As you can see in the video, to access Secret Beach, visitors must dive off their boat into the deep waters of the Tapiutan Strait and swim towards a seemingly impenetrable karst wall. During calm tides, gutsy swimmers can make their way through a keyhole crack in the wall to access a tiny lagoon backed by a white-sand beach within. Although Secret Beach is much smaller than the beach described in Alex Garland’s novel, the adventurous approach is exactly the same. The fantastic location and evocative atmosphere would certainly inspire many an author. 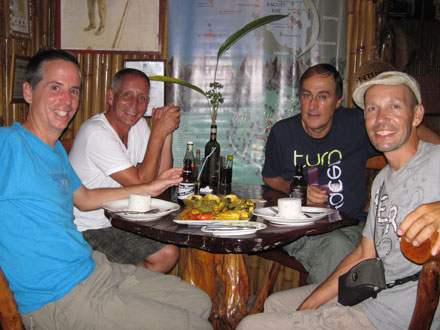 Early retirees Dave and Bill are the latest nomads we’ve encountered while staying in El Nido. The charismatic English/Scottish couple of 23 years has just recently left their home in cold and rainy Scotland in search of a quieter life abroad. The two are part of a wave of people we’ve been meeting all over Asia. These Contemporary Nomads choose to travel or live in countries much cheaper than their own where they can enjoy a higher standard of living for much less money.

But leaving their busy lives behind wasn’t a small step for the two Brits. END_OF_DOCUMENT_TOKEN_TO_BE_REPLACED

Craving a little more adventure, Tony and I have been exploring Palawan’s beautiful coast by sea kayak. From the karst-enclosed coves of Coron Island to the hidden beaches of El Nido, we have been paddling to discover Palawan beyond the tourist bangka tours. As you can see in the video, it was well worth the effort.

Life in the Water 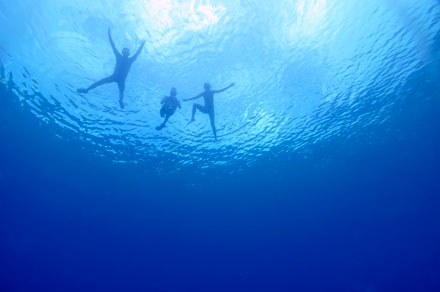 I have never spent so much time in the water as I have here in Palawan – and I’m loving every second of it! Our friend Olof, who we mentioned was a great photographer, snapped these pictures of Tony, Elin and me while we were goofing around in the beautiful waters off of Shimizu Island. 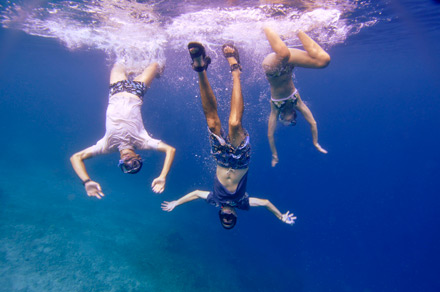 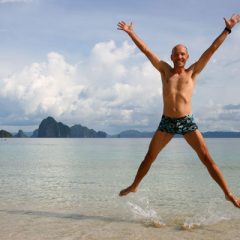 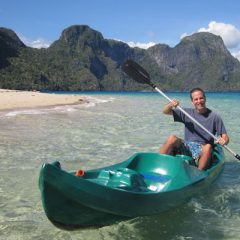 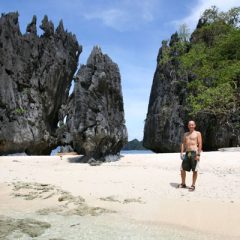 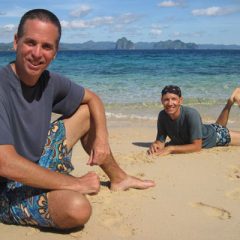 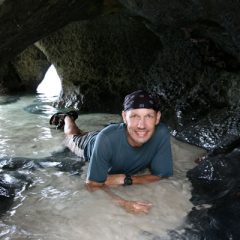 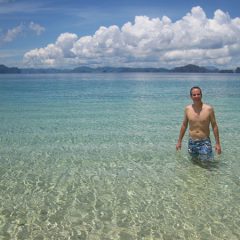 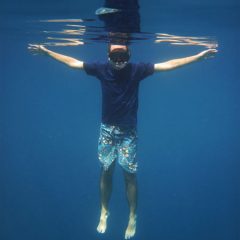 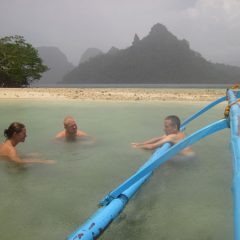 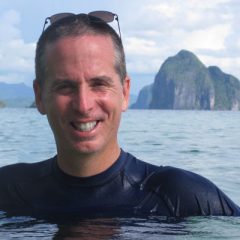 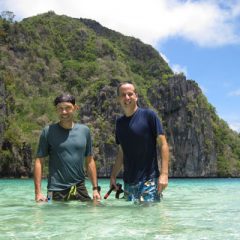 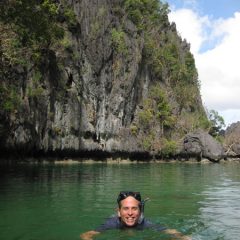 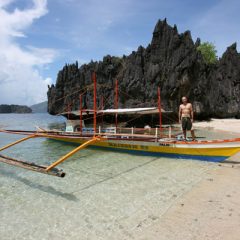 Island hopping is THE reason to come to El Nido. For days, we’ve been exploring the stunning scenery of the Bacuit Archipelago, which, like Coron Island, certainly qualifies as one of the world’s most beautiful locations. More insane karst geology, endless turquoise and emerald waters, and perfect beaches everywhere. Does scenery get any better than Palawan? If it does, let us know where. 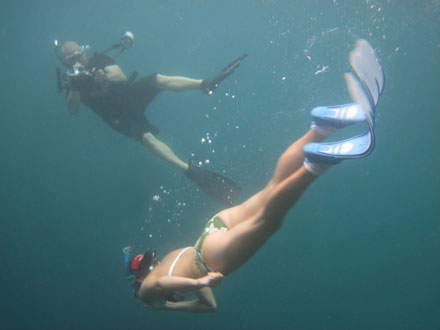 We’ve joined forces with Swedish travelers Olof and Elin to explore the beautiful islands of the Bacuit Archipelago. Luckily, these two enjoy the same relaxed pace of island hopping as we do with time to photograph and explore below the surface as well as above. The four of us also appreciate a good END_OF_DOCUMENT_TOKEN_TO_BE_REPLACED 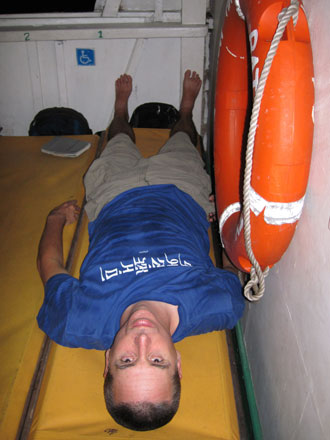 After a fantastic time in Coron, we were ready to move on to El Nido, a small coastal village on the neighboring island of Palawan. Our search for transportation, however, left us in a foul mood. Everyone in town was pushing us to make the 6-hour trip in a small wooden bangka, and it was obvious why. The boat ride came with a hefty $50 price tag. This may not sound like much, but fifty bucks is more than a month’s wages for many Filipinos. It’s complete extortion.

Needless to say, we were pissed. But rather than giving into the Mafia-like behavior of the bangka owners, we END_OF_DOCUMENT_TOKEN_TO_BE_REPLACED 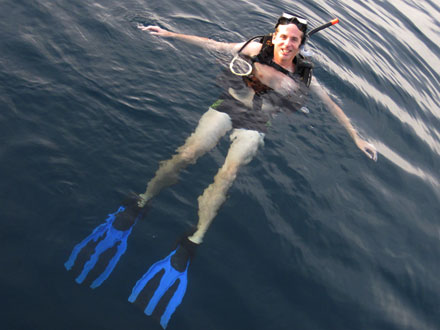 Barracuda Lake is considered by many to be one of the world’s most unique dives. A surreal, sensory experience from moment one, the underwater exploration is more about what you feel than what you see. Our dive master summed it up best when he said, “If you could do one dive naked, this would be it.”

While diving naked might be a bit of a stretch in conservative Philippines, we did forgo our wet suits, which made our approach to the dive site a bit rough. END_OF_DOCUMENT_TOKEN_TO_BE_REPLACED